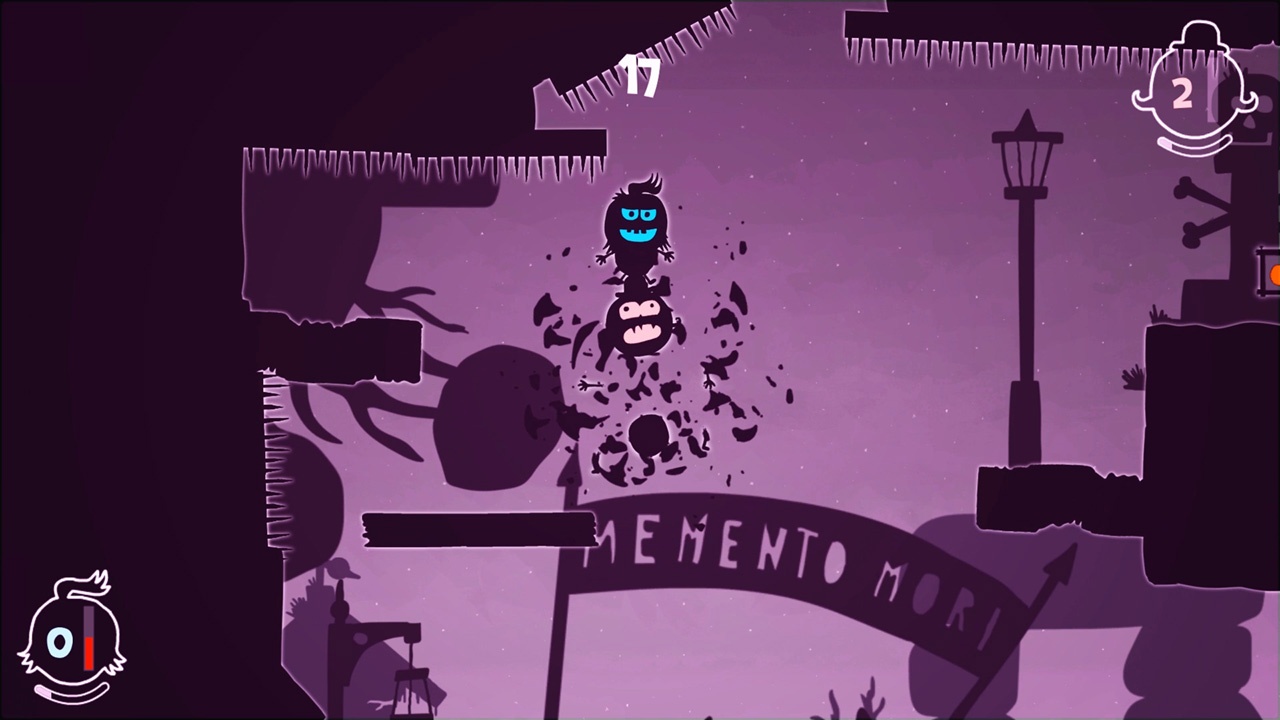 Large companies, particularly ones that like to make shooting games that appeal to teenagers and college students, have been chided for the way they develop their franchises. The problem, many feel, is that the game is too focused on making its mark through multiplayer moments and events. This isn’t a way to develop a game, some would argue. You need to create a solid single player campaign so that, if you live in the middle of nowhere or generally have terrible internet, you aren’t missing half the game due to lack of connectivity. It’s a fair argument that gets countered with games that are exclusively online multiplayer (Overwatch) that are fantastic. However, it’s not just larger games: smaller indie titles deserve the critique as well. Which is why Bouncy Bob will not be excused for a lack of gameplay simply because it’s a smaller studio.

The storyline of Bouncy Bob is, well, nonexistent. You play a dude, presumably named Bob, who leaps around the stage he’s currently on, trying to squish zombies. It’s not enough that zombies have already been done to death, but they’ve already been done to death on the Switch, and even in different scenarios. So when you have what basically amounts to a slightly frantic physics based puzzle game with odd control choices, you get…not a whole lot.

The objective for each of the fifteen stages of Bouncy Bob is to eliminate a target number of zombies by landing on them. Bob can’t jump in the traditional way: you hold down a button to open a sweeping target arrow, then release it when it’s pointing the way you want to go. Bob launches, you can flap your arms a limited number of times to stay slightly aloft, then you fall down. Hopefully, you land on top of a zombie and destroy it, moving you closer to your goal. But, most of the time, the zombies move, and, surprise, they can walk, run and hop. So it actually takes surprisingly little effort on the zombies part to evade you, which makes this the exact OPPOSITE of most zombie scenarios. In fact, due to the zombies having a nice variety of moves and attacks – some run, some have spears, some drop bombs – I’d say Bob is actually at a disadvantage. 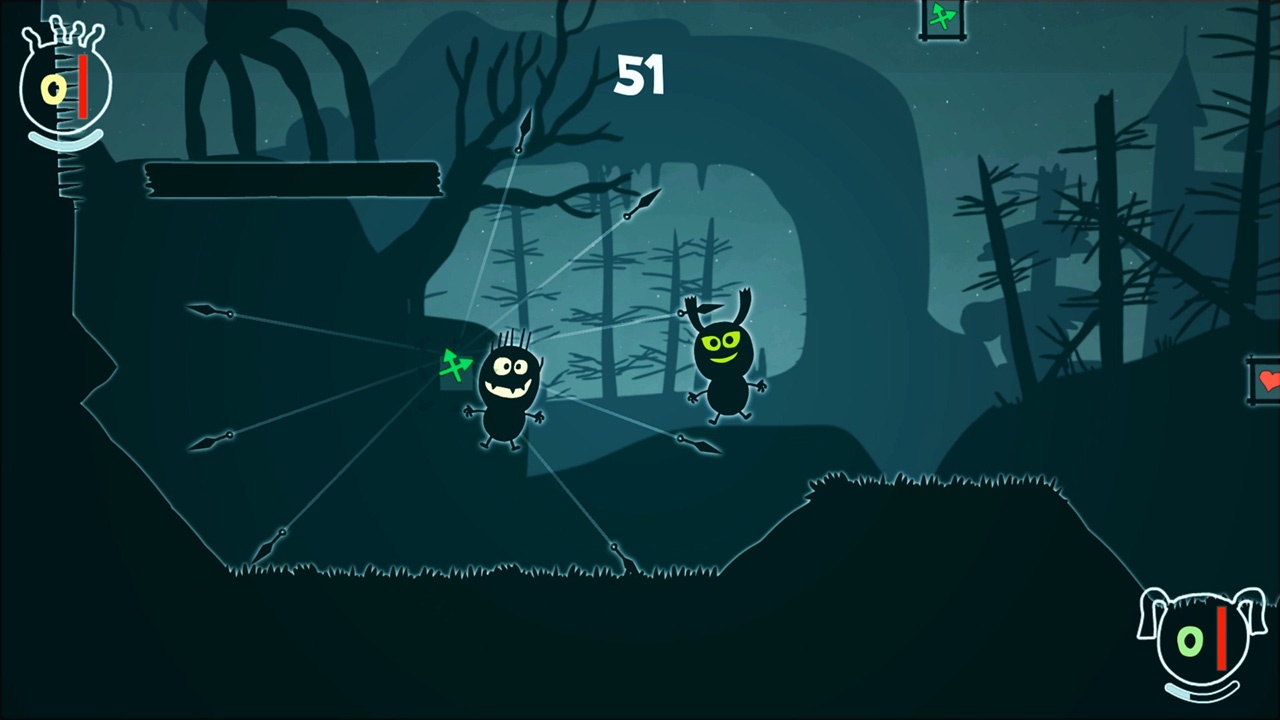 There are also item boxes that are peppered throughout each stage, but these are items that need trial and error to figure out exactly how they benefit you. The heal box, for example, totally heals your health; self-explanatory, right? However, sometimes the item boxes recharge after a few seconds, and sometimes they’re one time uses that disappear. So you have to basically play once and die to work out your strategy on if you can be incredibly brash and stupid, but then heal up, or if you need to be cunning and patient in order to achieve maximum effectiveness. Nine times out of ten, patient is the name of the game in single player mode, because there isn’t a time limit on the levels. So wait for the bombs to recharge and then drop them again, or wait till zombies cluster together, and then use the blue force field power to smash like ten at once. I’ll admit, the inclusion of the items does make for a more interesting experience, and certainly elevated my opinion of the game higher after I finished the incredibly simple and lackluster tutorial.

But the devil is in the details for Bouncy Bob. For one, the controls are, in all honesty, awful. The one button approach might appeal to some, but, for me, it raises the bar to have it be spot on, similar to 12 Orbits and its frantic but fluid game play. For Bob, however, you end up doing these awkward bunny hops when you’re not ready, or else launching yourself far, far too high from your target. By the time you land, the approach to things are totally different, and you have a fraction of a second to calibrate before you get stabbed, bitten or otherwise murdered. I get that the developers were trying to do something different with the simplistic approach, but I would have enjoyed being able to simply jump and angle myself with the joystick instead. It may have made the game too easy, but at least it would have felt better than wildly careening around like a demented super-ball. 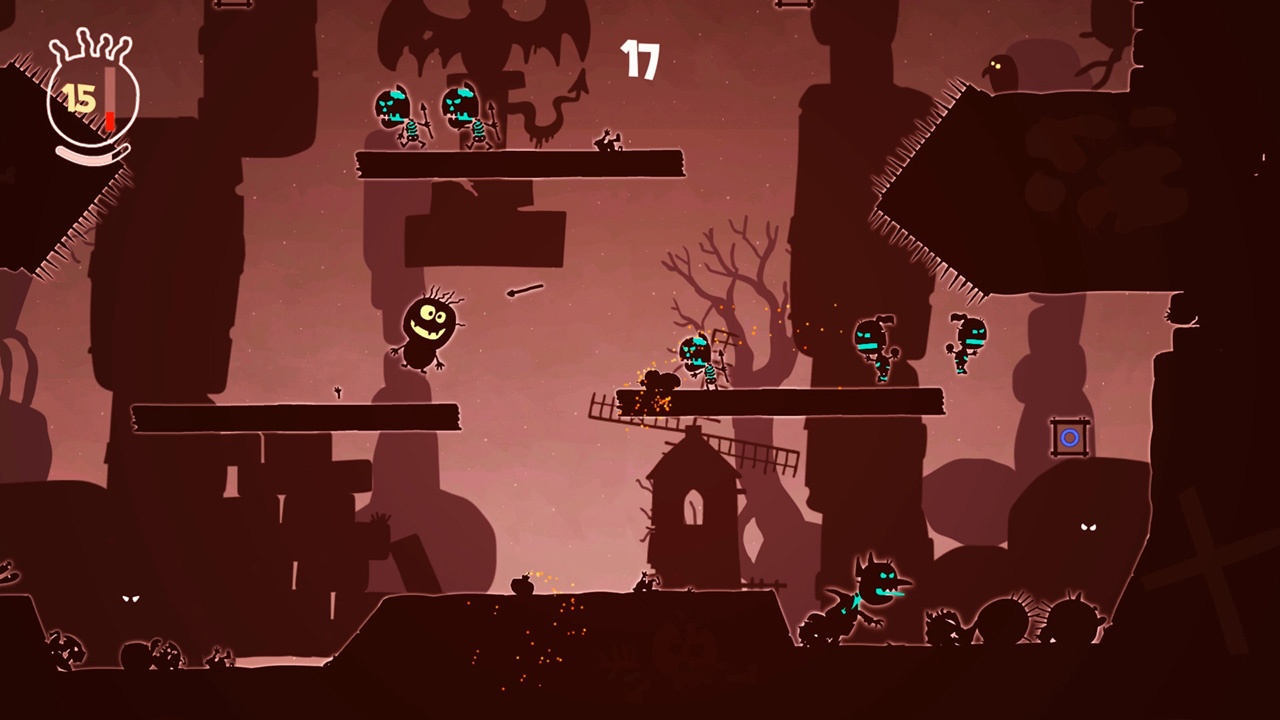 And then there’s the matter of multiplayer. You get reminded of the multiplayer on load screens between levels in single player mode. Multiplayer is the first option for gameplay on the main menu. This game is meant to be a multiplayer situation, and rightfully so. The multiplayer on Bouncy Bob totally disregards the zombie thing and focuses, instead, on the strangest kind of deathmatch I’ve ever seen. Up to four players can pick arenas where they try to jump on top of each other. This is one of those situations where it is only fun when you have other people, because AI being able to get the jumps right would frustrate me to no end and AI missing me would feel like they were taking pity on my gameplay. With friends, the ridiculous nature of it all feels fun and definitely something that screams for couch action. Sure, using bad controls to try and bop each other on the head as you launch and flap like charcoal snowmen. Of course it’s fun, it’s inherently crazy!

But that’s where the fun is and stays and remains. Once you venture out of the multiplayer and do stuff solo, all the hangups and shortcomings that I mentioned before come back in full force. I honestly believe Bouncy Bob would have been better if it strictly did multiplayer, but, sadly, I’m a solo player before anything else. There’s merit here for an afternoon drunk game or something to pass the time with between important work, but not enough to keep my attention longer than a few rounds. The price is right for Bob, but that doesn’t make it the game for everyone. Only pick this one up if you need a new avenue to harass your close friends.