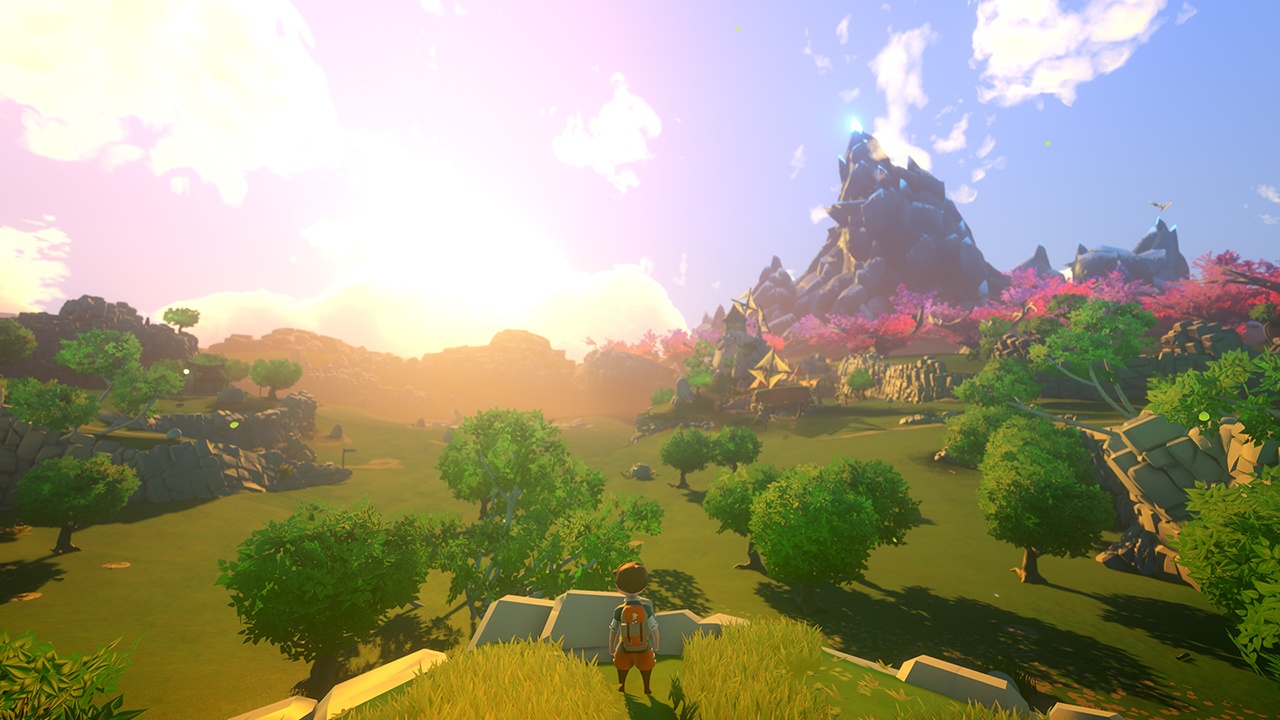 There are certain titles, even genres, that produce such a milestone in their conception, that other games try hard to emulate their success; often producing second-rate attempts that further enhance the reputation of the original titles. However, Yonder: The Cloud Catcher Chronicles, the latest open-world adventure to roam onto the Nintendo Switch, has instead decided to take elements from a handful of successful games, to produce a world that not only emulates others, but also has enough personality of its own to stand out in the saturated market of independently developed games.

Developed by Prideful Sloth, with publishing from Merge Games, Yonder: The Cloud Catcher Chronicles takes place on the lost island of Gemea. Having been sent away from the islands as a baby, due to a dark threat known as The Murk that has enshrouded the land, you now return under the guidance of a mystical compass to reclaim your lost past. It isn’t long before you are tasked with helping the inhabitants of the island that remain, with clearing the murk from their land. However, in order to achieve this, you need to enrol the help of the Sprites; small faery-like creatures that have the ability to banish the dark threat to the islands eco-system. The sprites are scattered all over the island, hiding within the various biomes that comprise Gemea; from lush grasslands to windswept plains and snow-covered peaks to the wilds of the old kingdom.

Each of the elements of murk require a set amount of sprites to help lift the gloom; making your quest in retrieving them, or finding their hidden spots, all the more important. Exploration soon becomes an important part of the gameplay, as you are free to explore the open-world settings of the island however way you wish. There are no boundaries, except for the murk infested areas, no lives or health, no levelling or upgrades. Instead the game incorporates a number of different elements which are free to explore at your own pace. Don’t expect any combat either, as you won’t find any on this peaceful island. Instead, you take on the life of your nameless, although customisable, protagonist and learn the various trades available to you to help bring prosperity to the people of the islands. 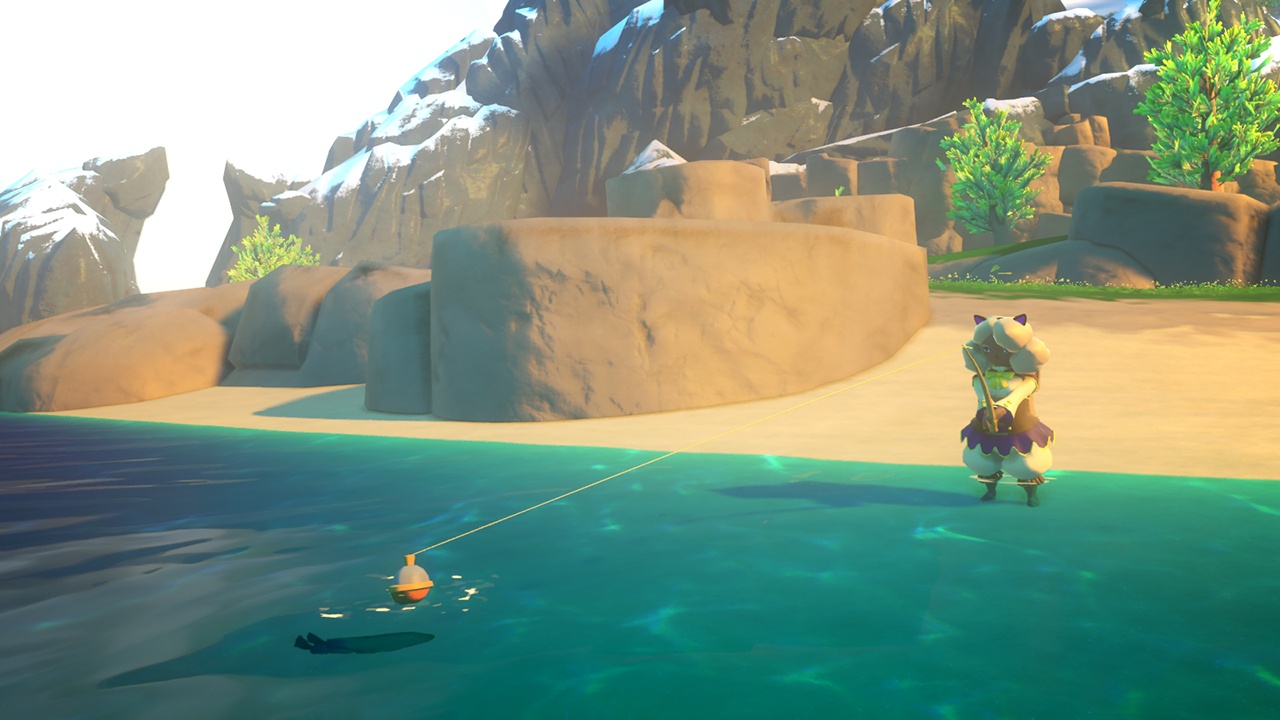 As well as your main quest of ridding the land from the murk, you can interact with the population of the island as they bring you a series of tasks and side-quests that, not only help develop the islands, but also contribute in the development and skills available for you to utilise. This is where the influences from other titles take centre stage. Yonder’s style of exploration and growth, even presentation, is very reminiscent of the Zelda or Fable franchises; you can set up and run a minimalistic farmland, or lands within each of the biomes, á la Harvest Moon; there’s even a sprinkling of Animal Crossing with its cutesy charms, animal adoptions and character interactions. It all adds to produce a charming game that can be explored at your own pace, and quests completed, or worked towards, in any order that you choose.

It’s this element of freedom that makes this game such a pleasure to play, although there are also further components that bolster this charm, but I’ll get to those shortly. The mechanics of how the island works, it’s settings and ecosystem, also add to this, with each of the biomes having their own breeds of wildlife or varieties of plant-life, creating a truly, spectacular living and breathing world that is yours to fully explore. Despite these extra elements, the main bulk of Yonder’s gameplay involves running errands or completing tasks for the various people you encounter. There isn’t much adventure, apart from exploration, but through this interaction you can learn skills and trades that cover such things as chef, carpenter, farmer and tailor; all the way up to a master of the trades. These in turn can help you fulfil quests, as well as bring fortune to the islands and their inhabitants.

Although there aren’t any enemies as such, or princesses to rescue, Yonder does contain a story of sorts, but not one that pushes the game along. In order to achieve this, you need to create your own story as you live your life on Gemea. However, fulfilling certain tasks and lifting the murk reveals more than just locations and skills, as you begin to uncover the past that brought you back. I won’t go into the details of the underlying themes of the game, but the further you progress, the more you unravel, until the threads of history begin to twist and turn to a point where the game begins to ask questions of you. With a lack of hand-holding direction, apart from the navigation provided by your mystical compass, this element of story-telling isn’t the most important mechanic of the game in its driven narrative; that part of the game boils down to you and the creation of your own story and adventure through exploration. 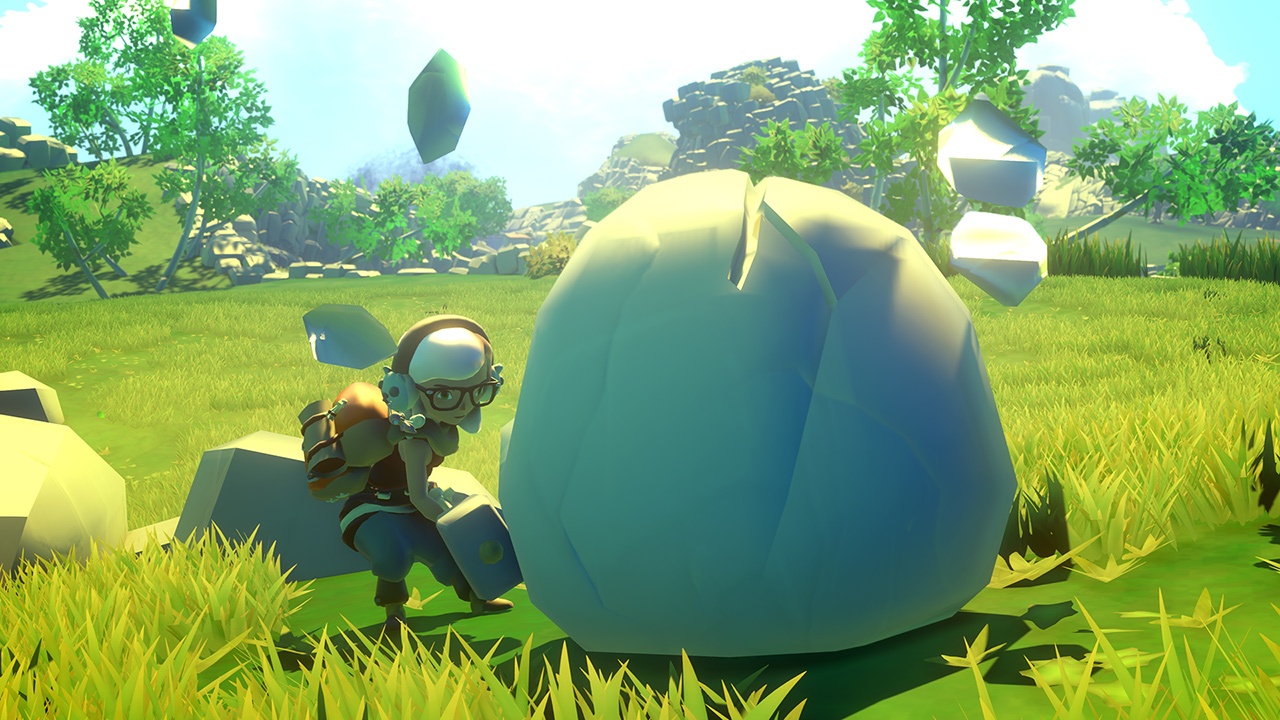 This main mechanic of the game’s offerings may not be to everyone’s taste, with its repetitive nature and calming pace. However, it all boils down to what you’re looking for; view the game for what it is and it offers you a wealth of gameplay options that can be played at a nice, easy pace without constraints or urgency. If you view the game in that respect, then this is most definitely a title worthy of recognition. Its presentation values are also incredibly high. Graphically, this is one of the best looking games available on Nintendo’s Switch to date; especially with its truly remarkable light models, which are the best I’ve ever seen on any home console.

As well as fully-blown seasons, Yonder also contains dramatic weather changes from thunderstorms to rain showers that look truly amazing. Sometimes, it’s just too easy to stop what you’re doing and just stare at the marvels that surround you. It’s sound effects are equally pleasing too, a personal favourite is chopping trees; it produces such a crunching sound that I could easily spend the day cutting down the foliage of the island. A soundtrack plays throughout and, although looped, isn’t a tune that I tired from listening to. It’s all these hidden delights that the developers have incorporated that makes this a really pleasing experience, as you are literally living a life in the true nature of living things.

Overall, Yonder: The Cloud Catcher Chronicles is a sublime example of indie gaming at it’s very best. It simply oozes perfection in all of its presentation, which is one of the overriding causes of making it such an enjoyable experience. There is no action, there is no urgency and there is no excitement, making this game all the more remarkable in its playability values. What you do get though, is a pleasant journey through a beautiful land that can be explored and played however way you want to approach it. It sits perfectly upon the Nintendo Switch, especially with its portability, as this is a title that can be played in a casual setting, anytime, anywhere, without the worry of not finding the time to complete a certain task. However, it also contains enough elements in which you can easily lose yourself for a few hours at a time. Simply put, if you’re looking an easy-to-get-into and easy to play game, that is both relaxing and without urgency, then Yonder will more than deliver. It’s such a beautiful world to explore that playing it can become a part of life itself.