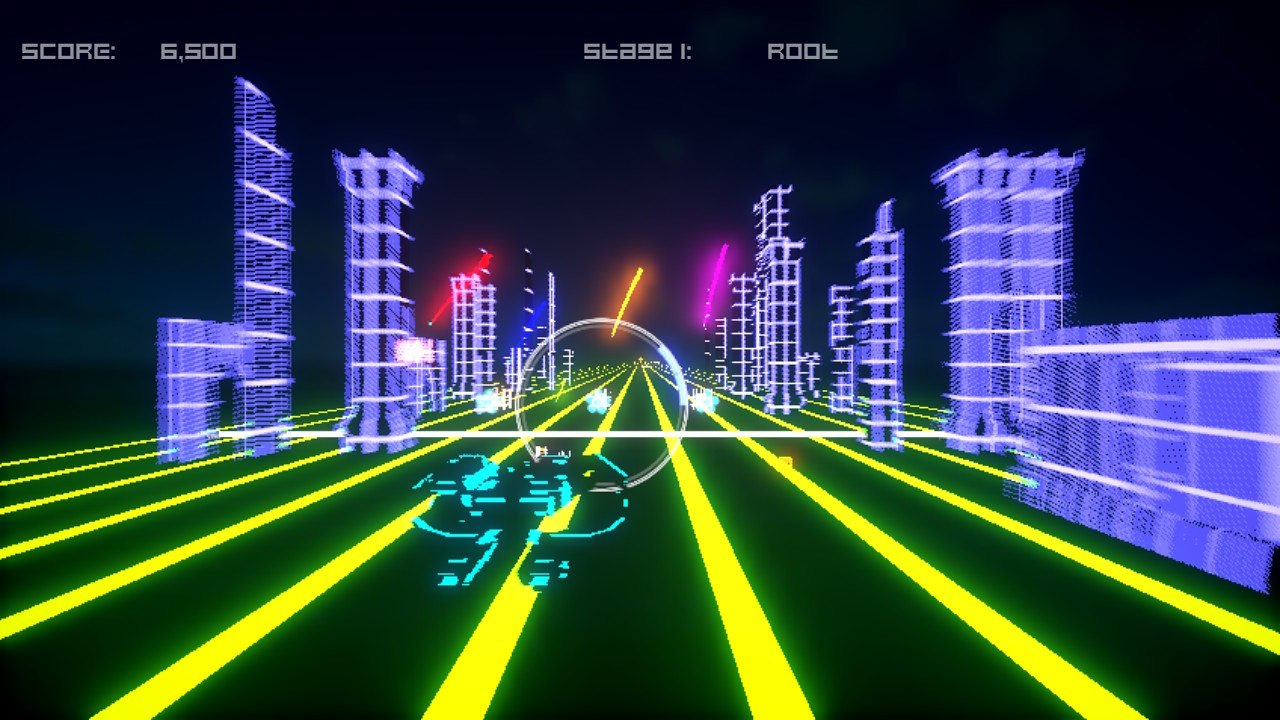 There’s this experience that all rhythm game players have had, where they move off of the traditional “match notes to buttons” situation and try something a bit different. For a lot of players, that came in the form of REZ, which abandoned logical progression and accuracy in favor of absolutely surreal form and execution. It was (and still is) a groundbreaking game, and several groups have tried to pay homage to it, either through complete copying or from their own interpretations of the game. Now, Daifuku Future Lab, along with publisher Mebius, bring the latest of the musical shooters, L.F.O. – Lost Future Omega, to the Nintendo Switch.

As there is no plot to speak of, let’s delve directly into the core mechanics and ideas of L.F.O. You are a blue ship, and you want to shoot the large squares. The large squares shoot blue flower bullets, and a single bullet that hits is game over. You can use a repeating gun that will also destroy the offending squares in one hit, or there is also a homing laser that can take out multiple squares at once. After a period of time, a giant boss cube arrives, and you gotta shoot that into oblivion without using the homing laser. Beat the cube, you get your choice of two new tracks to move onto. Get through five tracks and win the game. If it sounds simple, it’s because the concept, at least, definitely is. 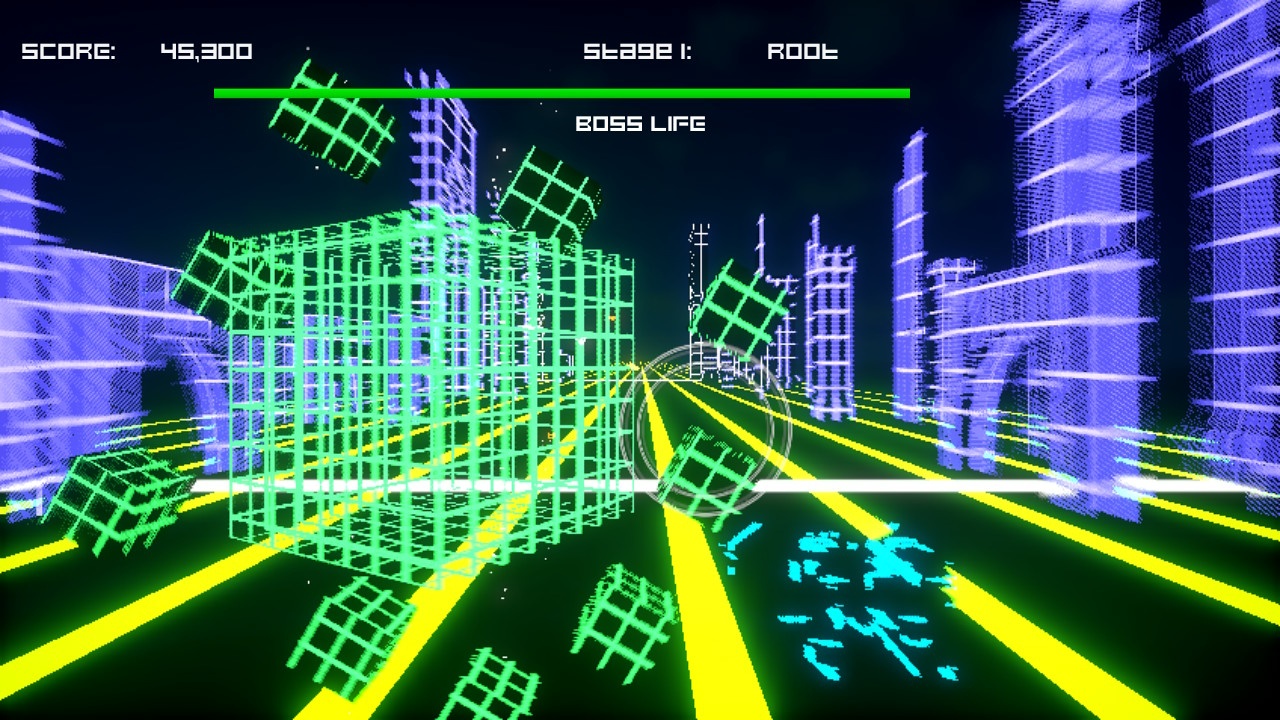 Graphically, L.F.O. chooses a lot of retro wireframe and callback design to keep the visuals engaging and undistracting. Especially when you start to get into the later stages, the number of cubes on-screen that you have to deal with (and, subsequently, the number of bullets) gets to a rather ridiculous number. There isn’t a difficulty setting, so you just have to roll with what the developers believe is the appropriate amount of pressure to keep on moving. While there’s nothing wrong with how the game looks, there is a fine line between low fidelity and overly simplistic. When you see everything in motion, the blur of objects and landmarks fits the motif and makes the game appear to be as nonstop as the gameplay. From stills and screenshots, though, you can tell that things are a bit rough around the edges, a bit janky in certain spots. I’ve seen this as a common, almost conscious choice from Japanese indie devs over the years, and, while I can’t fault that it works well in execution, it still rubs me the wrong way when I see the patchy nature of it all.

You’ll need to play a couple of times to fully understand what’s going on in Lost Force Omega in terms of shooting and aiming. It’s not explicitly clear, but the enemies that appear exist in a much larger realm than what you might perceive at first. That is, the offending, shooting cubes pop into existence above and below your normal aiming range, so you find out that you actually move beyond where you think you should be able to. The boundaries of each level are bigger than you and bigger than is mapped, so it gets confusing when the other squares just kind of exist and you don’t realize you can fly through the “floor” and “ceiling” to reach them. Then again, if you’re not in front of them, they usually don’t shoot at you, so it’s a double-edged sword. If you simply sweep a cube in your sights while moving around wildly, they’ll become a target for the homing laser, so sweeping the board clean is often a matter of twitchy movement instead of actual accuracy.

Which is good, because it’s a pain in the ass to aim and get a lock on the squares properly most of the time. You shoot these piddly little shots straight out in front of you, and they retaliate with these massive, blooming flower shots that can easily take up way, way more of the screen. This is all something to work out before the “boss” arrives, and the boss itself is not a problem. Big, green, spinning cube that’s super easy to shoot. But while you’re dealing with the boss, the smaller squares keep spawning and keep shooting at you, and you can’t see them until the flower is up your ass. It’s less than pleasant, and really quite frustrating at times. 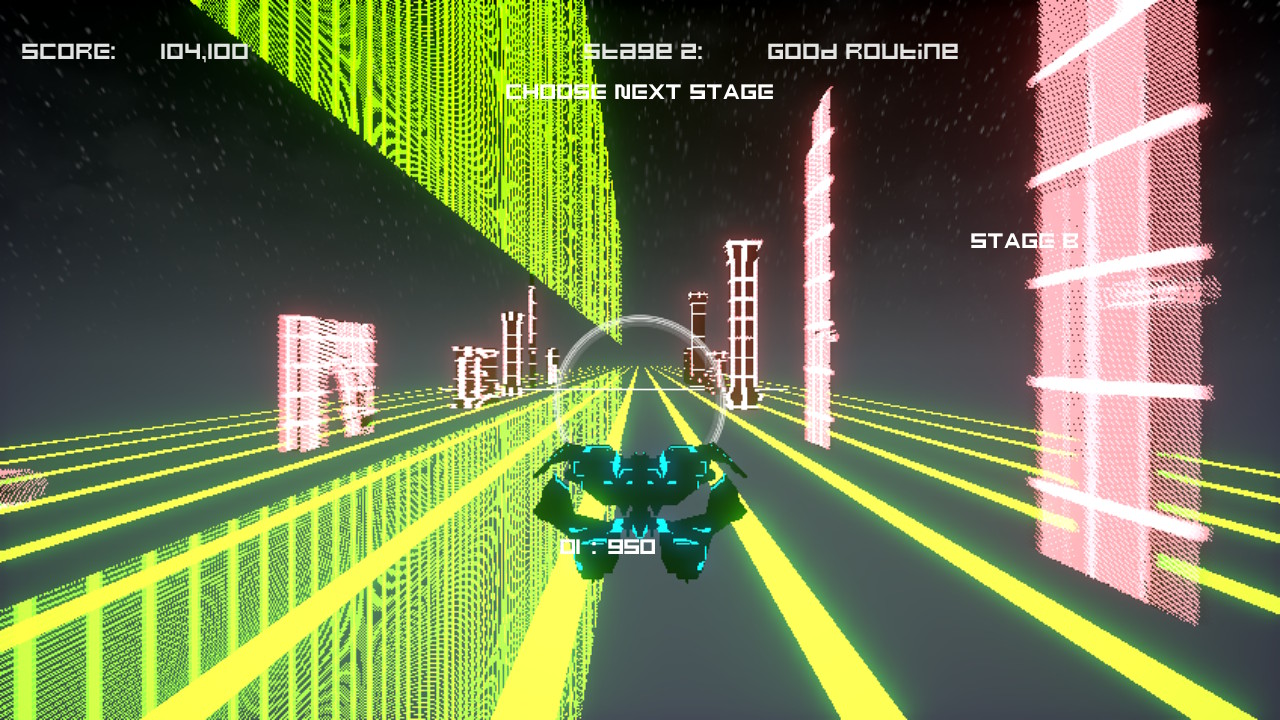 Daifuku Future Labs must have known this, so, instead of a scaling difficulty, they dropped in Okiraku mode, which is, well, God Mode. You never take damage, ever, so you just see how high of a score you can get. This is a good, relaxing situation where you can hear the full soundtrack of the game and explore the different musical paths, as, at the conclusion of a boss fight, you can choose between a left or right track to move onto the next mix. All the music flows together very seamlessly, with some very chippy, driven tracks that gradually get faster and more intense the further into the game you fly. Aurally, it’s a fantastic, trance-like situation that I deeply enjoyed and got heavily into.

L.F.O. really does a great job of offering two different gameplays in one package (and a third, more challenging mode if you spend enough time in normal). For the shooter who wants to put themselves to the test, there’s normal mode. For the high score chaser who just wants to rock out, there’s Okiraku. And, for everyone who wants a different kind of rhythm game, there’s Lost Future Omega in all its glory. It might be a bit wonky, but the rumble is solid, the music is great and the concept is short, clean and executed well. Definitely worth grabbing for anyone who loves replay and electronic music.