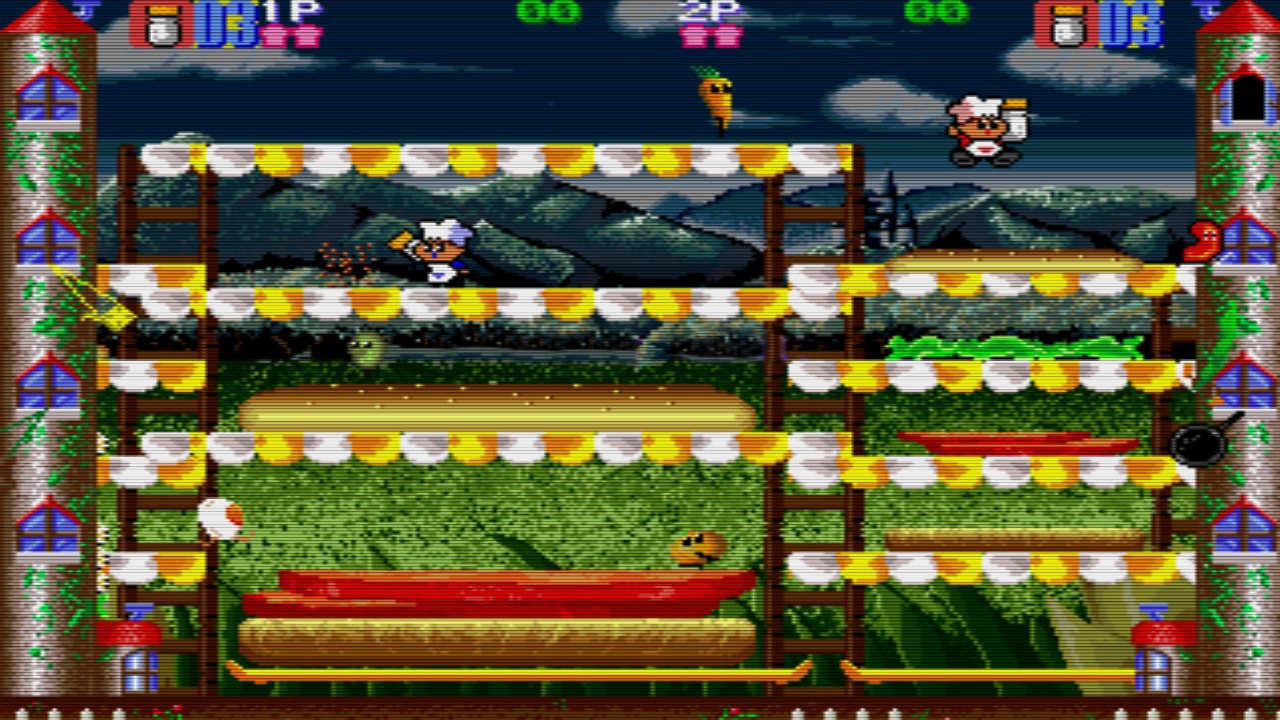 Johnny Turbo continues to bring some of the most interesting arcade titles to the Switch, and, whether I love them or not, I really need to applaud the action of investing the time and resources to port these games. Already the Switch’s eShop has become a bit bloated with some less-than-interesting titles, and the AAA lineup continues to grow, but slowly. I thrive off of unusual indies, appealing namesakes and oddball creations, and Flying Tiger Entertainment has made some relatively good choices in arcade investments. Good news, classics fans: Super Burger Time has arrived.

Burger Time is one of those enigmatic NES games that everyone has played, no one knows why and I can’t say that anyone has ever ranked it as a top-level game. Sure, the concept is one everyone understands: you gotta make those burgers, even if the food doesn’t want you to! The execution is still something that stands out in my mind as being pretty gimmicky, but in a memorable way. Basically having to run up and down ladders and platforms, avoiding touching sentient vegetables and meat, and running on burger patties to create massive creations of descending deliciousness. I guess my memories from the 8-bit days would be considered fond, but, if someone offered me a chance to play Burger Time “or another game,” I would check what the other game was first. 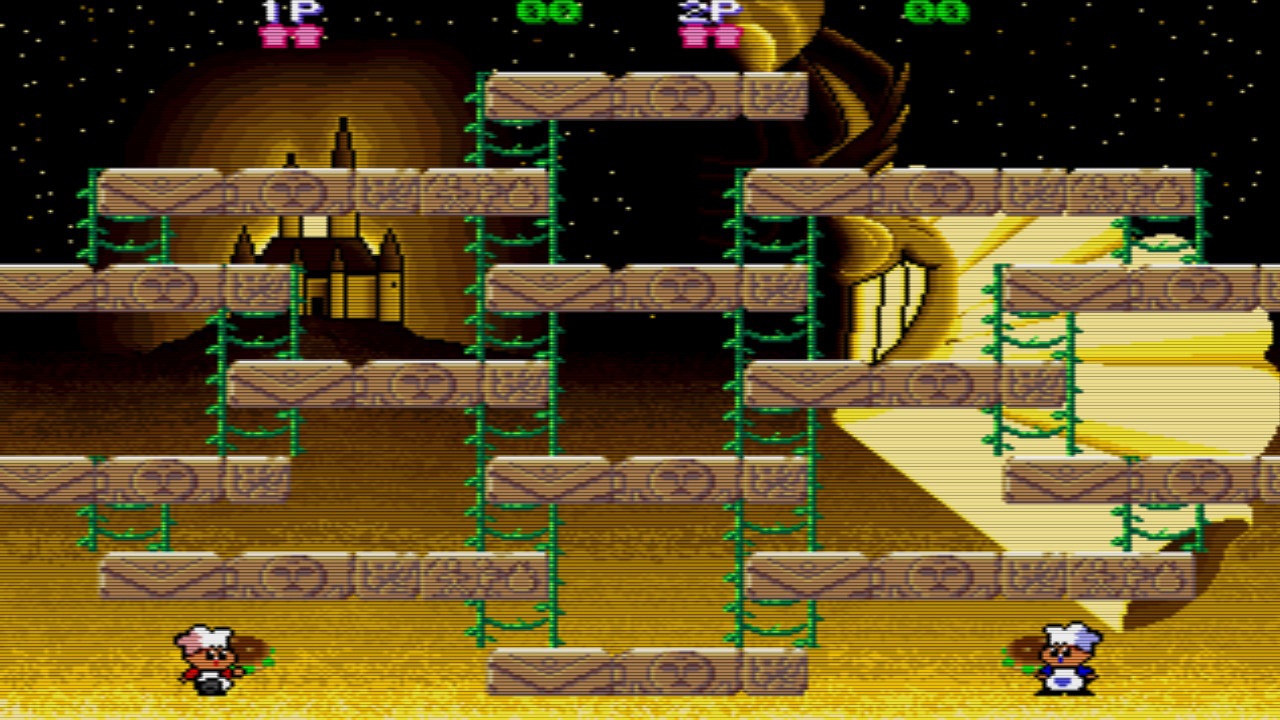 Super Burger Time is the arcade iteration of the series, and it brings several modifications to the game as a result. Firstly, the graphics are vastly better than that of the NES version, which bordered on Atari in terms of music, design and sprites. Super Burger Time feels like that tentative bridge between 8 and 16 bit, where the color scheme is more robust, the animation is a lot stronger and the music sounds like actual music and not a series of well-timed error beeps. For this reason alone, fans should really consider giving Super Burger Time a shot. It’s like being totally content with your bike tire constantly half inflated, and then trying to ride, just once, with a fully inflated tire. You’re stunned by how much smoother things feel, and you’re not sure if you can go back to the way things were. Probably why I don’t want to revisit the original Burger Time as badly.

Additionally, several core mechanics of the game remain intact but heavily modified. For one, our chef can jump, which is a frigging game changer. You can hop over a majority of the enemies, which, holy crap, makes my life. You also need to actually jump on the burger parts, which is good and bad. The good is that you can jump on any part of it to instigate the downfall, so you don’t need to cover as much ground. The bad is that you have to stop moving to usually jump, which leaves you vulnerable for a few seconds. It’s a tradeoff, and a different approach to the game’s strategy. My overall verdict is that I liked it: forcing the game to become more about on-your-feet reacting instead of a lot of “wait and see” like the original insisted makes it to be a more enjoyable situation.

But I wasn’t thrilled by how the salt changed. The salt, for those who don’t know, was a limited commodity that exists in Burger Time that allows you to dispatch foes who would seek to undo you. You get just a few shakes of the salt before it’s empty and you’re left to your own devices and wit. For Super Burger Time, the salt shaker is now unlimited but on a timer. This was really kind of bizarre to work with, because it definitely changes the approach to the game. Instead of using it as a last resort or a calculated risk, it’s now your first line of defense as long as you play as fast as possible. You got about sixty “game seconds” before it disappears, and that’s not enough time to knock the burger into place, not even on the first level. So it’s like a promise from a neighboring country to help during wartime, but only at the beginning, because they’re busy later. Don’t worry, you can always just die and get the timer reset! You know, the right way to play arcade games! 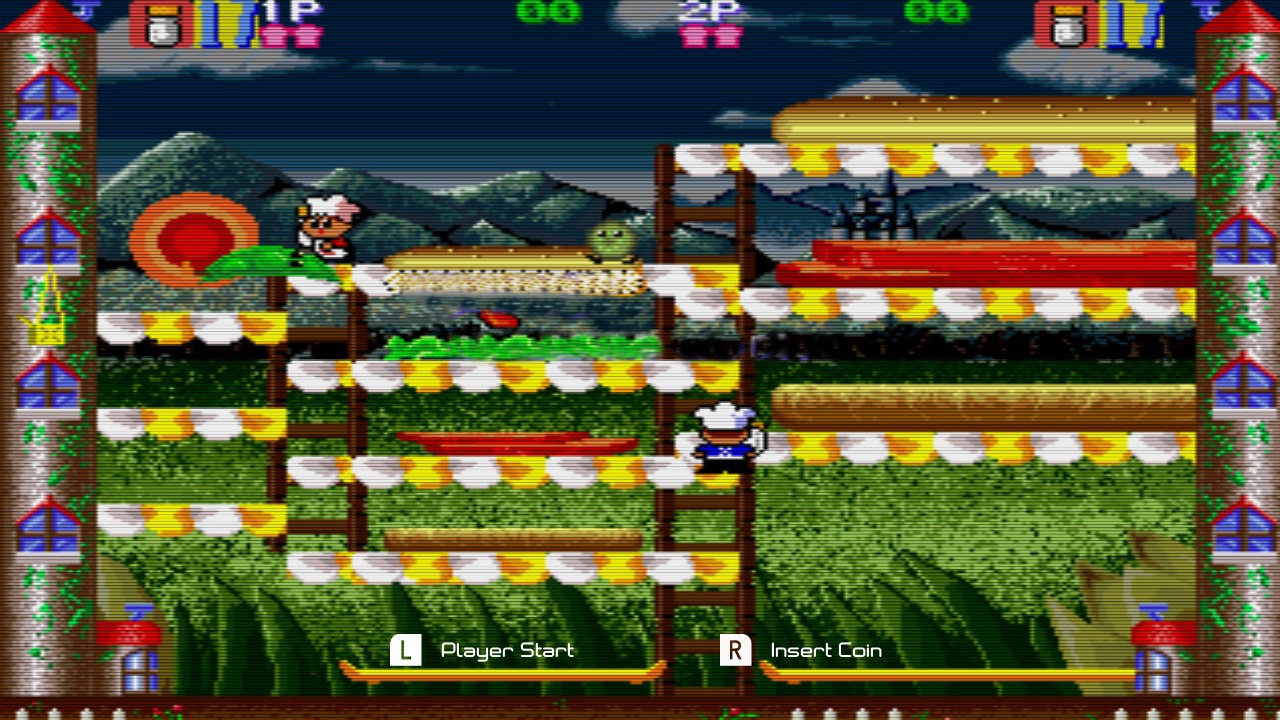 Super Burger Time also brings a lot more in terms of versatility and gameplay in general. Now you have enemies that have a much clearer AI pattern, and even use ranged weapons at times: something that would have been unthinkable for the original. There are even boss fights, which, real talk, are the worst goddamn things ever. While I love the fact that the screens now pan to show the scope of giant burgers that you make, or the fact that you traverse the world to make burgers in the jungle, these boss fights totally take me out of the game. You hurl burgers (the same ones I’m assuming you were making) at things like giant beehives, large fish and a particularly big king. I’m assuming the King is like the reason why you’re burger timing, but there’s not a splash screen for the story. Anyways, these boss fights are just all about getting into the sweet spot and mashing the attack button. You don’t even really need to worry most of the time, just be vaguely aware if something is going to hit you.

But what makes Super Burger Time a great game regardless of burger experience is the two player mode. Arcade games with co-op are always a ridiculous affair, and the complexity of having two people on the screen at once while building burgers is no exception. Again, this game doesn’t really scale, so it becomes an absolute breeze to have one chef salting and running interference while the other drops buns and lettuce with aplomb and skill. This is something that I can easily see being a repeat event, simply because the whole game can be finished in under a half hour solo, and even faster with two players at the helm.

Super Burger Time is a delightful retro romp, and it’s even better for fans who’ve only heard the name but never played the superior Super edition. If you can get past the hamminess of the concept and the fact that nothing is ever really explained, you can set yourself up for a fun hour or so and revisit continually with friends and family, all in the name of burgers.