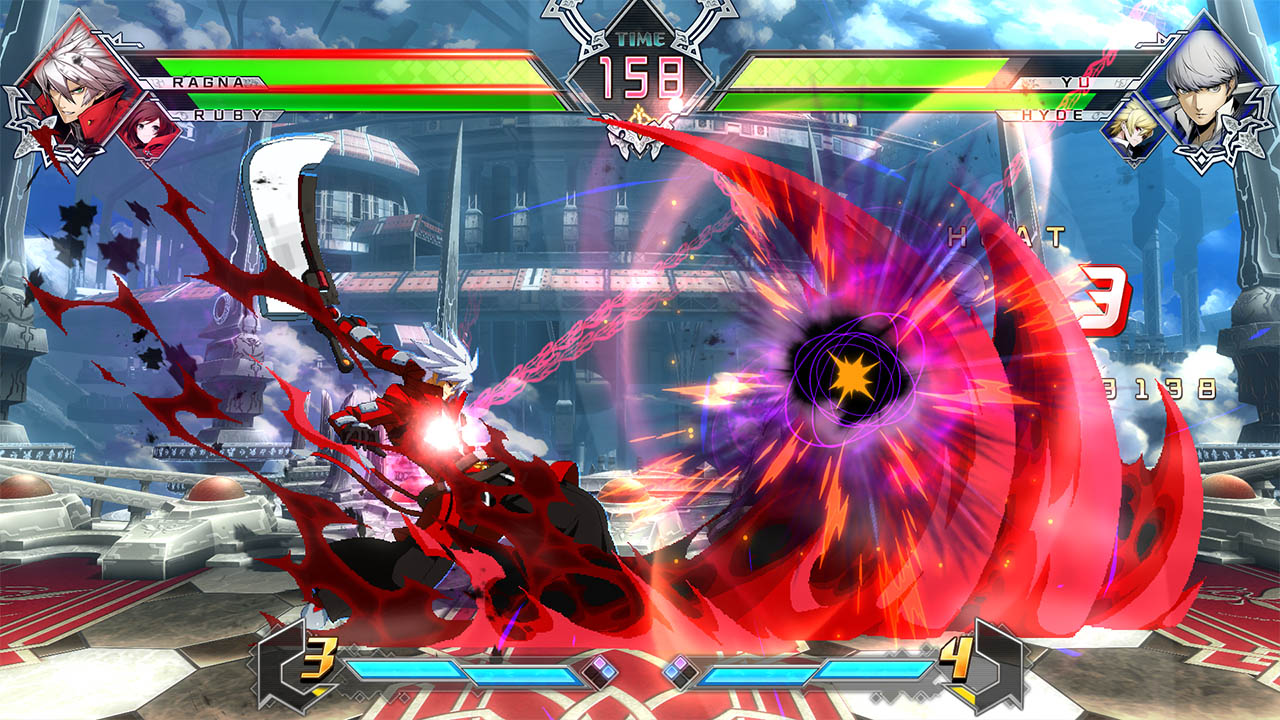 There’s nothing wrong with being ambitious. After all, it can only to lead to one of two outcomes; either be amazingly successful or fail dramatically. This is a concept that bears a significant relation in the development of video games, with a variety of titles throughout gaming history either surprising us lucky gamers or leaving us with a very sour taste in our mouths. The latest game to try its hand at presenting us with a world of wonders is Arc System Works’ Blazblue: Cross Tag Battle, a 2D arcade fighter/beat-em-up, that is punching its way onto the Nintendo Switch.

Despite its ten-year history, this is the first time a title from the Blazblue franchise makes its way onto a Nintendo console; an arrival that is certainly long overdue. However, despite the lateness in its transitioning, the arrival of this title has never been more welcome with its genre filling a void within the Switch’s library, as well as its ambitious content that brings a complete crossover from other, similar, titles. As well as presenting us lucky gamers with the usual Blazblue fanfare, Cross Tag Battle also incorporates content from the Persona 4 Arena, Under Night In-Birth and the RWBY franchises to bring us an extensive roster of fighters, as well as an insurmountable variety of gameplay features and moves.

The game feels more like a deluxe version of previous Blazblue titles. Characters such as Ragna, Jin and Azrael make an appearance from the successful series, as well as incorporating characters from the other, aforementioned, franchises, such as Yu and Chie from Persona, Hyde and Lyne from UNIB and Ruby and Weiss from RWBY, to name but a few. In fact, the complete roster boasts around twenty different fighters, a list that is further expandable with the current crop of free and paid DLC; with more becoming available in the future. However, despite this variety of fighters and the cross-over of franchises, this is still a game that very much retains the mechanics of a Blazblue title. 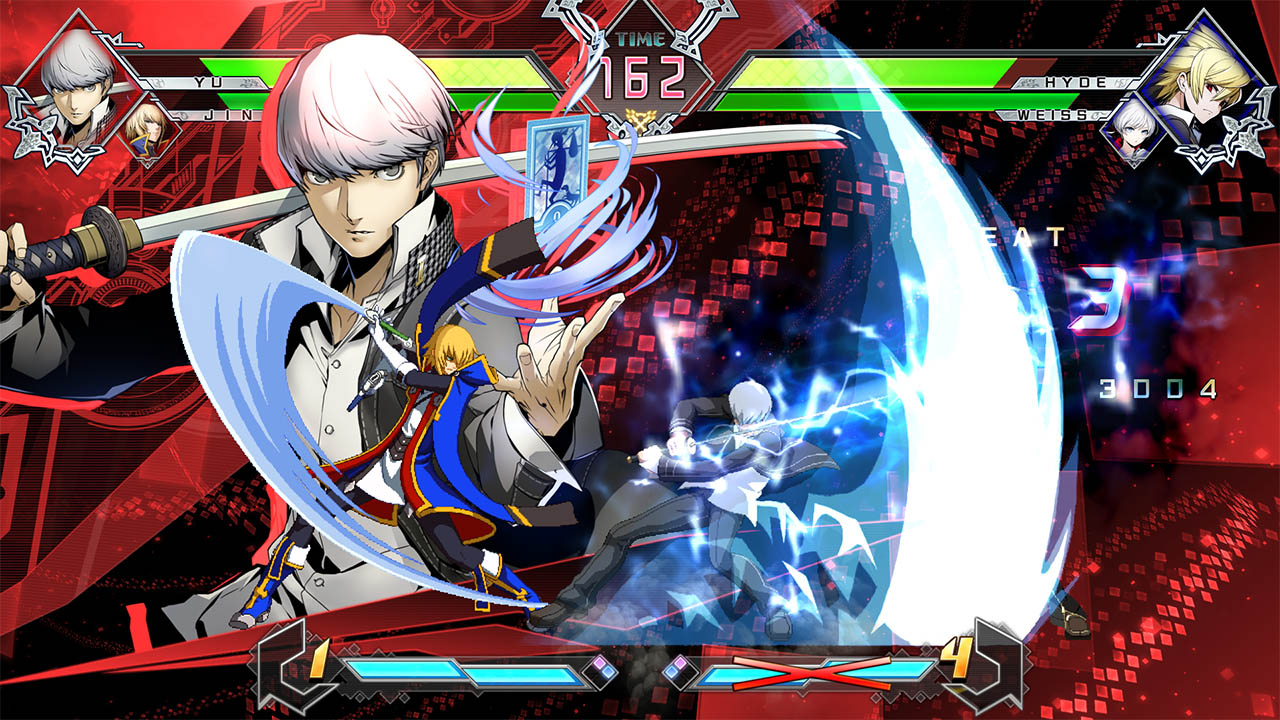 Keeping in line with its ambitious themes and cross-overs, Cross Tag Battle incorporates a lobby system for mode selections, rather than a menu-driven interface; a feature that takes its cues from Dragon Ball FighterZ. Using a 3D avatar, you are free to roam around the area as you interact and converse with a number of other avatars and areas. It’s a nice little feature, making a refreshing change from the usual menu selection mechanics of other games. Here you can select from a variety of modes from CPU battles, survival, episode mode and online lobbies. You can even purchase personalisation items here, which include avatars, titles and colour changes to the variety of costumes. It adds an element of accessibility to the title; something that is coherent throughout the many features of the game.

Whatever mode you choose, everything has a wealth of optional extras to tailor-make the experience to your own needs. A variety of difficulty levels create a suitable challenge whether you’re a seasoned pro or not. You can even practice your skills, or learn the overall mechanics of the game in the training and tactics modes; even create your own tag team of characters across each franchise to produce your ultimate team of fighters to take online, or locally against friends. There’s a wealth of options and depth here that is rarely found within similar games of the genre.

Of course, the main bulk of the gameplay revolves around a series of tag-team battles that consists of two rounds to determine the winner. It’s presented in a tried-and-tested manner, with highly detailed and animated, 2D characters that fight in front of fully-animated 3D backdrops. A variety of attack options are available, from the usual weaker fast attacks to slower, more powerful varieties. There are dashes, reversals, throws as well a number of special moves that can be utilized when certain conditions have been met. It uses a conventional five-button layout, but one that can be fully customizable to a control scheme that suits you. Being a tag-team battle, you can switch out characters, taking turns within the arena; you can even join forces to produce a dual attacks to give you an edge. Each of the characters have access to all of these basic moves. However, they also possess a range of attacks which remain unique to each of them.

As you fight, you slowly fill a skill gauge which can be used to pull off a series of stronger attacks; fill the meter up with a total nine and you can utilise a single-hit, instant kill move that is truly satisfying. However, this is easier said than done, but once you have the ability, produces an awesome display that is truly spectacular. Despite the variety in its mechanics and moves, this is a game that is extremely accessible to newcomers and seasoned fighters with its ease of use and utilisation of controls. For those looking for a story, then once again, Cross Tag Battle truly delivers with an episodic structure that incorporates all of the franchises within the game. Without spoilers, this main staple of the game presents a series of scenes that incorporates all characters, as well as a few extras and a plot that keeps you invested within the game. It’s all superbly presented too, with beautiful artwork and impressive voice overs, all of which is in fluid English. 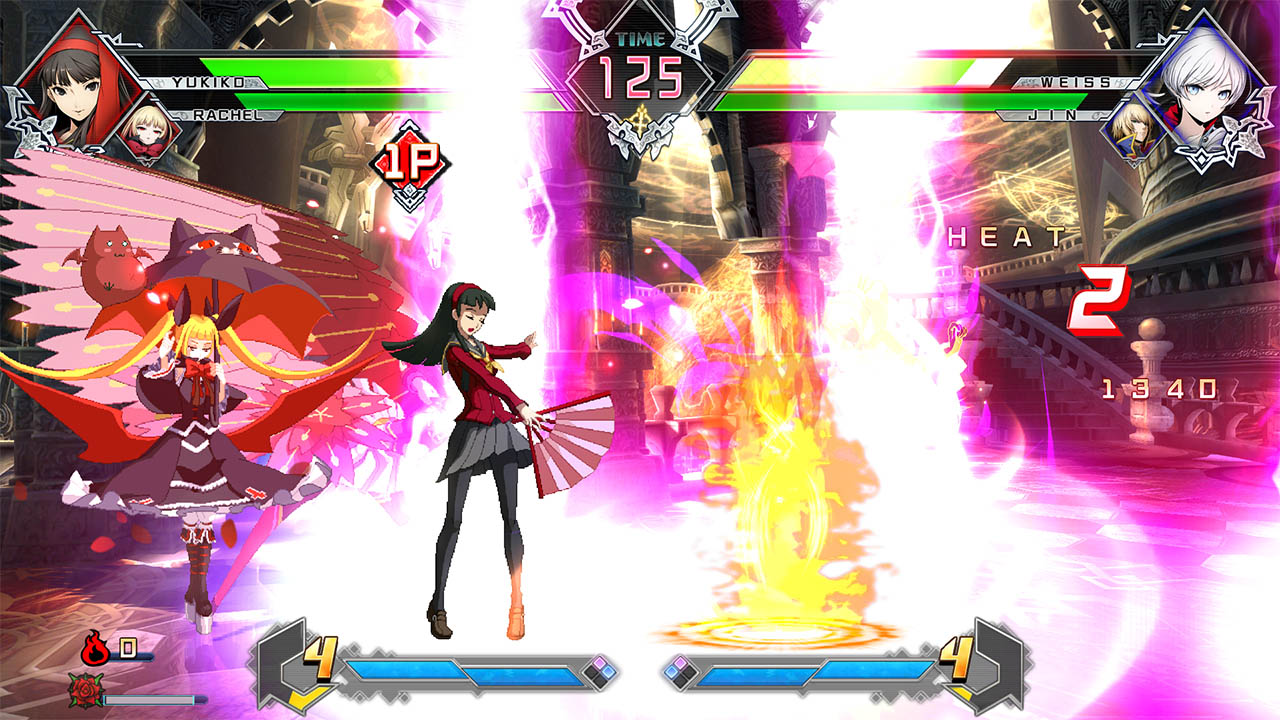 Although the game presents a number of options for the single-player, it’s in its multiplayer elements that the game truly shines; whether you take it online, with its totally lag-free fluidity, or play locally. It’s here where your customisation options really shine, as well as the ability to mix and match tag teams and show off your prowess to the uninitiated. However, particularly in local couch-play, the joy-cons present a good option for control, but the experience was further enhanced with the use of a pro controller with its securer build and larger buttons. It’s no big deal but is definitely something worth considering.

Despite containing a wealth of depth, options, modes and gameplay, Cross Tag Battle does, unfortunately, contain a couple of puzzling issues too. The first of these is the lack of an Arcade Mode. There are other modes, such as the survival and vs CPU options that play in a similar fashion, but the lack of this game mode in an arcade beat-em-up is a strange one; even more so when you factor in the appearance of, what looks like, an arcade element within the pre-game lobby, but it’s a non-functional location. Maybe it is something that may be added at a later date. The other strange omission is the ability to play as all of the characters who make an appearance within the game’s episodic story mode. These can be purchased separately via buying the paid DLC, something that has caused a stir within the community, but nevertheless, it’s a puzzling decision. None of these are game-breaking though and doesn’t really deter from the overall experience that the game can offer.

Overall, Blazblue: Cross Tag Battle presents a nicely packaged game that is bursting with content and features to please any fan of the fighting genre. It’s presentation values are very accomplished here, with an easily accessible title that sits perfectly on the Nintendo Switch; especially when you consider that this game looks and plays identically to the PC and Playstation 4 versions of the same game. A couple of strange omissions don’t really hamper the experience on offer here, as there are so many things to do and see within the game, that you’ll soon forget about its shortcomings. It’s fighting and control mechanics are sublime, allowing you to fully customise your experience and the story contains enough variety to keep you immersed and invested within the worlds of its included franchises. There’s never been a better game for the Blazblue series to make its Nintendo debut, but then again, there’s never been a better console than the Switch for it to do so. A simply sublime game that needs to be in every Switch owners library.