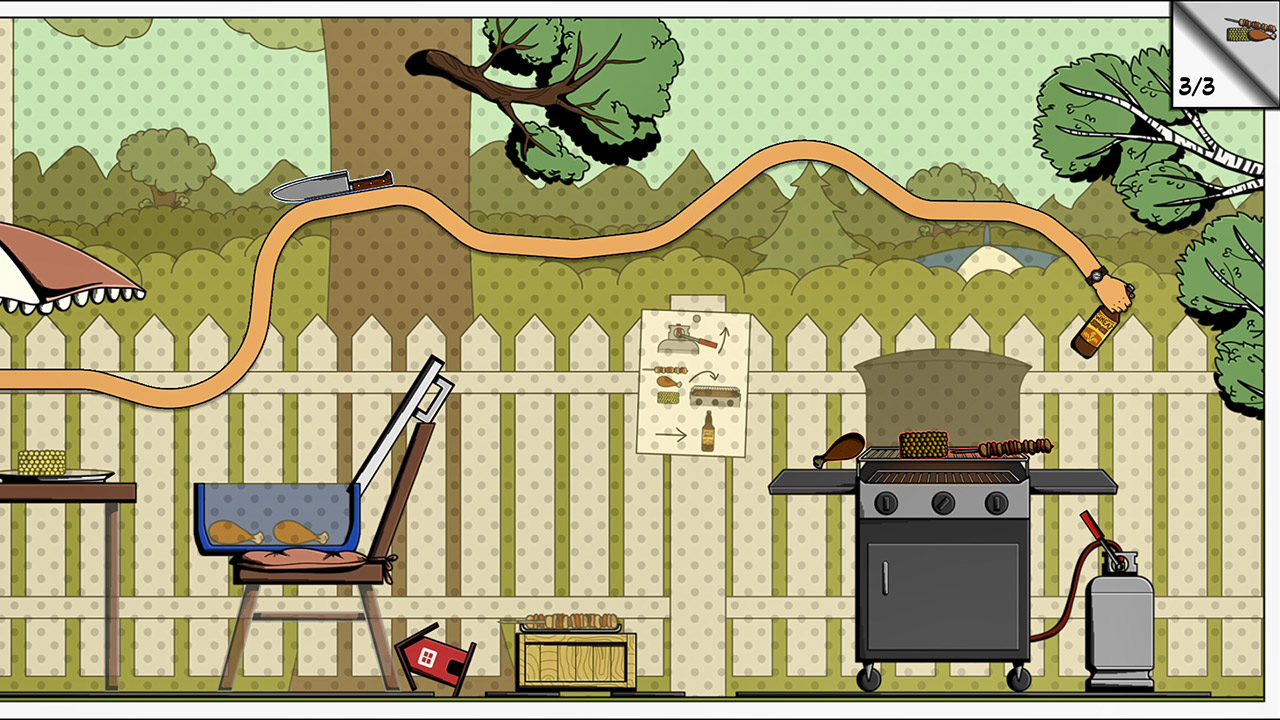 Wouldn’t it be nice if you could just reach out and elongate your arms to grab something that may, otherwise, be out of your reach? You could grab the TV remote sitting on the other side of the room, or change the game on your console, all without leaving the comfort of your armchair. You could even stretch out and have a drink, just like our protagonist in Sometimes You and Kamina Dimension’s new game on the Nintendo Switch, Grab The Bottle.

The game plays within the puzzle genre, tasking you over a series of varying levels, to stretch out your arms and grab the bottle that sits precariously somewhere within the environment. However, as with most puzzlers, there are many obstacles to avoid or requirements that need to be met before you can do so. You need to grab, pull, drop and manipulate the environment, or objects contained within, before you can reach for your final goal of grabbing the bottle.

With a limited amount of space available, you need to plan your route to gather components or reach the bottle. Some levels can contain a variety of options in how you traverse the terrain. However, as you progress further through the levels, many of the levels contain a mechanic that, not only produces only one route, but also gives a very narrow margin for error; often resulting in a frustrating replay of the level over several playthroughs until the right path is found. 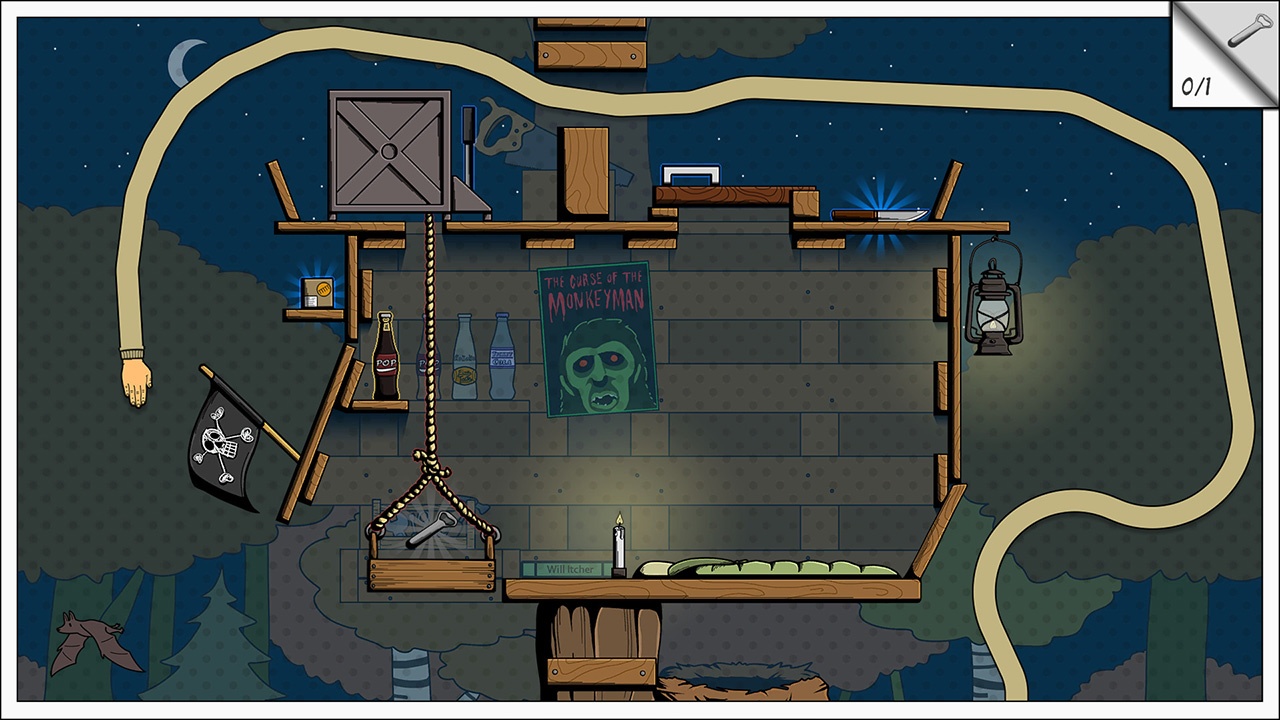 Over its series of levels, the game follows a story that begins in fifties America, where you start life as a baby who, after discovering they have an infinitely stretching arm, do all that they can to retrieve their bottle of milk. As you progress through the levels, you follow the life of the protagonist from cradle to grave as they continuously crave whatever bottle may be within their reach. You’ll find yourself in all manner of predicaments, from reaching out from your cot or pram, to traversing the obstacles at the amusement park or avoid burning yourself at the family’s barbecue.

The story and levels are all presented in a pop-art comic style, with background and foreground objects presenting a series of finger-crunching obstacles. Hit any one of them three times or more and your quest for the bottle is over. However, avoiding hazards isn’t the only thing that can stop you, as some levels require you to pick up objects, such as toy cubes or bombs in order to break certain objects; often a necessity in order to reach a required object that may be hidden within. Other requirements involve collecting a set number of other items, such as dummies, or pacifiers, or bottle openers to name but a few. A total is displayed in the upper corner of the screen and once this figure has been fulfilled, in the collection of the required items, then you can go forth to grab the bottle.

However, this element of the gameplay can create all manner of problems, not just in the collecting of objects or manipulation of the environment, but in the area that is available for you in which you can manoeuvre your arm; although a saving grace in this mechanic is the ability to rewind your arm when you grab an object that is used to break other items. This becomes even more prevalent during the more restricted elements of the later levels. With such a small window for manoeuvrability, the mechanics of the game largely rely on an element of trial and error; often leading to repetition and frustration as you try varying methods of fulfilling the level’s requirements. 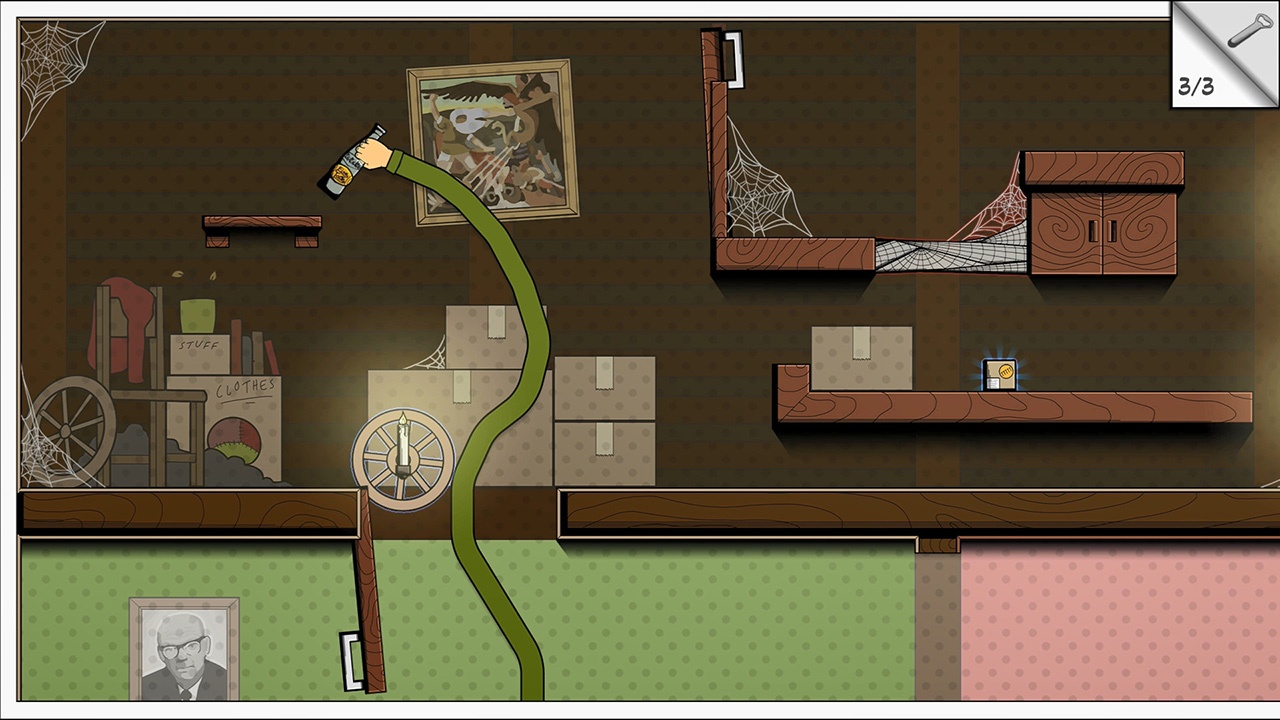 In order to try to mix things up, the game presents a number of environments, as well as try to incorporate varying elements of the gameplay. A personal favourite was one particularly stage that has you chasing a bird at high-speed while you dodge environmental hazards at the same time. However, with its unforgiving room for manoeuvre, these parts can still frustrate. In order to try and stretch a helping hand, the game will offer you various elements to try to even up the playing field, such as a boxing glove, for instance, which makes you invulnerable to hazards or counters above certain items that show you the order in which they must be collected. Despite this though, it still doesn’t detract from the overall frustrations of the game or repetitiveness from each of the levels’ designs.

Although the game tries to add some form a variety to the proceedings, its core mechanic of trying and rinsing through repeated actions remain at the forefront of the game’s mechanics. Unfortunately, it does take away a lot of the fun that can be had from this title, despite its inviting visuals and puzzling ideas. Its sound values are worth noting, however, with some cleverly, cutesy baby chuckles and musical tones that change with the times of the life spanning levels. It does contain a certain style, both in terms of gameplay and aesthetical presentation, but just ends up falling flat with its route-one mechanics and unforgiving difficulty.

Overall, Grab The Bottle does contain some good elements, but too many bad ones detract from the overall experience. Its puzzles, level designs and mechanics promote too much frustration to make this an enjoyable title. Despite trying to add  touches of variety here and there, as well offer a helping hand, they simply don’t vary enough to make the game interesting; even in a casual capacity. Unfortunately, it has to be said that this, ultimately, was a game that made me want to hit the bottle instead of grabbing it.