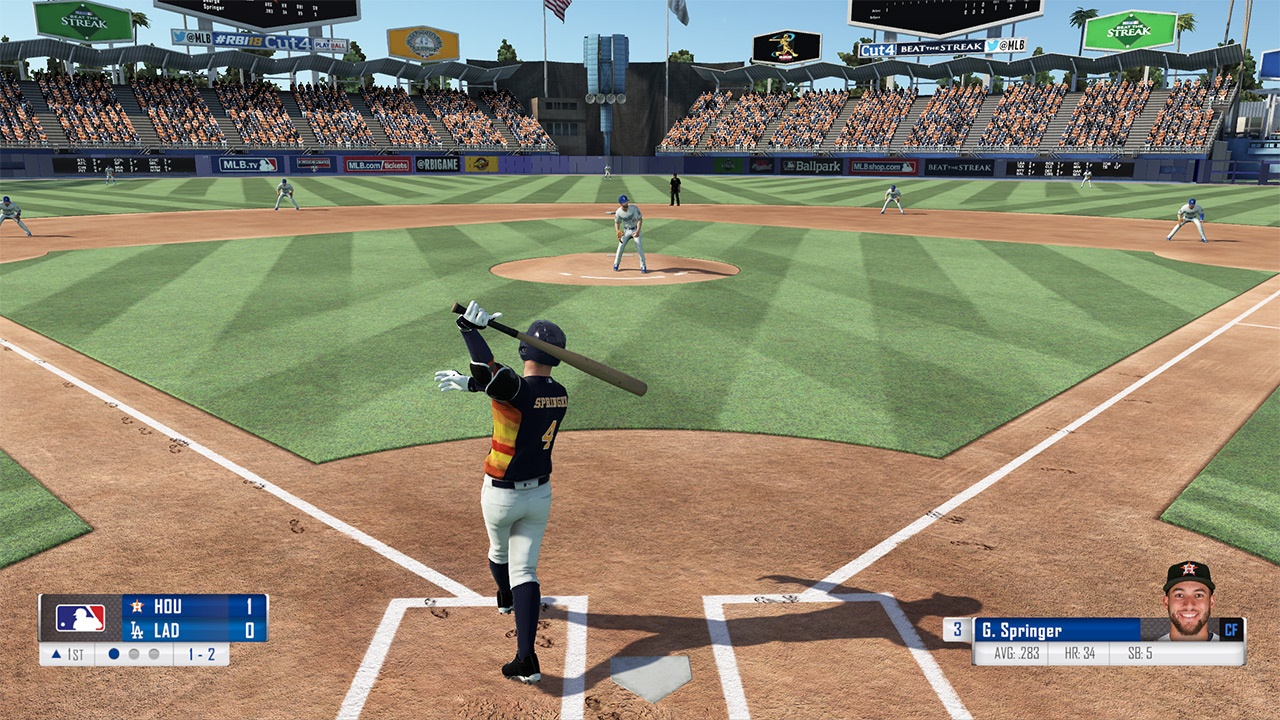 It’s always puzzled me why the sport of Baseball isn’t as successful in the United Kingdom, or any other European country for that matter, as it is in the United States of America. The popularity and fanfares of its major leagues is a concept that has never caught on over the ocean, despite the sport being played within the school curriculum of physical education. It was always a sport that I enjoyed participating in, revelling in the honorary lap of hitting a home run. These days, due to its lack of popularity in the mainstream, the closest I can get to replicating those moments of glory are through the medium of video gaming. Titles such as MLB The Show and Super Mega Baseball have long provided such entertainment; with some titles faring better than others in their simulation of the sport.

The latest of such games to hit the shores of the Nintendo Switch, comes in the form of RBI Baseball 18. Developed by MLB, with publishing through MLB Advanced Media, this sequel to last year’s offering now boasts a new franchise mode, home run derby mode and a whole host of upgraded features including improved ballparks, crowds, player models and animations. Upon loading, the first thing you’ll notice is the presentation values of this title are particularly high; even matching the professional look of titles such as Fifa and Madden. It’s menu system is nicely laid out and easy to understand, detailing each of the various game modes that are on offer. The soundtrack also contains a licensed track-listing, boasting artists such a Royal Blood and the Foals. It all adds to give a nicely professional feel to the aesthetics of the game and a high level of production.

RBI Baseball 18’s two main modes of play revolve around its two new offerings of franchise and home-run derby. The first covers a ten-year period with your favourite team, or any other from its roster, with an overall grade awarded at the end of it. There are also a few modifiers to add a touch a variety including trades, free agents and legendary players. Updated rosters can also be downloaded to keep player stats and teams up-to-date, which is a nice feature. Home run derby presents a fun diversion where you go head-to-head against the console or a friend via local multiplayer. The objective here is to try to smash as many home runs as possible; your eventual score being added to a worldwide leaderboard where you can boast bragging rights or simply work on your technique in order to climb amongst the ratings. 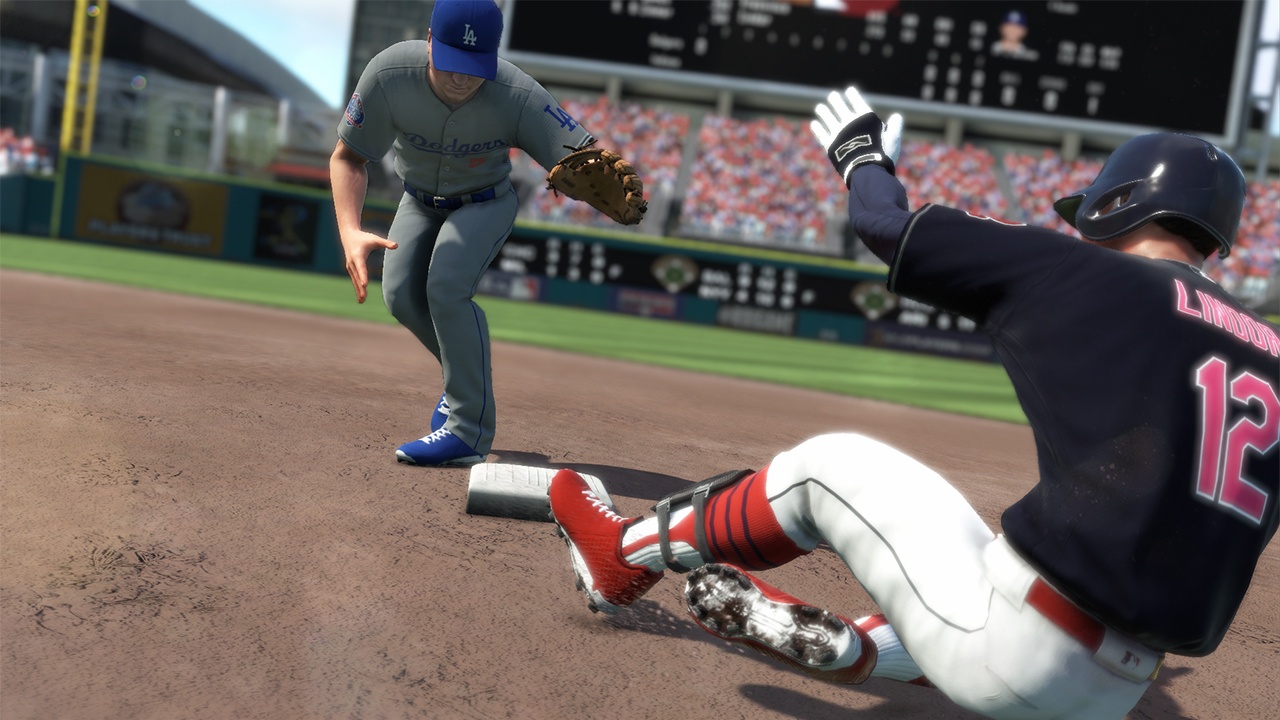 As with all sports simulations, it’s how the game plays on the field that truly determines its success. Again, RBI’s production values are particularly high here, especially in its graphical presentation. Ballparks look suitably detailed with animated 3D crowds, neatly cut pitches and character models and animations that match the personality traits of specific players. However, the main premise of RBI’s playability is to produce a mechanic that simplifies the elements of the sport to make it a more accessible title and it’s here, unfortunately, that the game begins to show glaring faults that make it far from being able to hit the mark.

One button swings, or pitches, with influences on delivery performed with the left analogue stick, leaves the game feeling as if the mechanics of its swing are randomly generated. Timing is of the essence here, but much like the batter, its mechanics can feel a bit hit-and-miss. There’s not much scope for judging if a pitcher’s delivery is true or not; often leaving you to swing against dead balls that produce a large number of fouls or missed strikes; essentially, the execution of its moves, whether you’re batting or pitching, rarely feel as if they are fully under your control.

Fielding fares no better either and, in some circumstances, actually comes off worse in a lot of its mechanics. High balls produce a circle of where the ball is going to land. By placing an outfielder within the circle pretty much guarantees the batter being caught out. However, it is the way that this mechanic is delivered that produces flaws in its execution. For instance, a fielder may be running to catch the ball with his back against the delivery, yet still catches the ball despite not being in a position to do so. Fielder control is often questionable too, with no ability to switch between player control; often leading to confusion on whom you are controlling. Again this can also lead to a feeling that you are not fully in control with the action that is going on around the field. Running speed is also questionable with players not running to intercept a ball at the pace that is required. 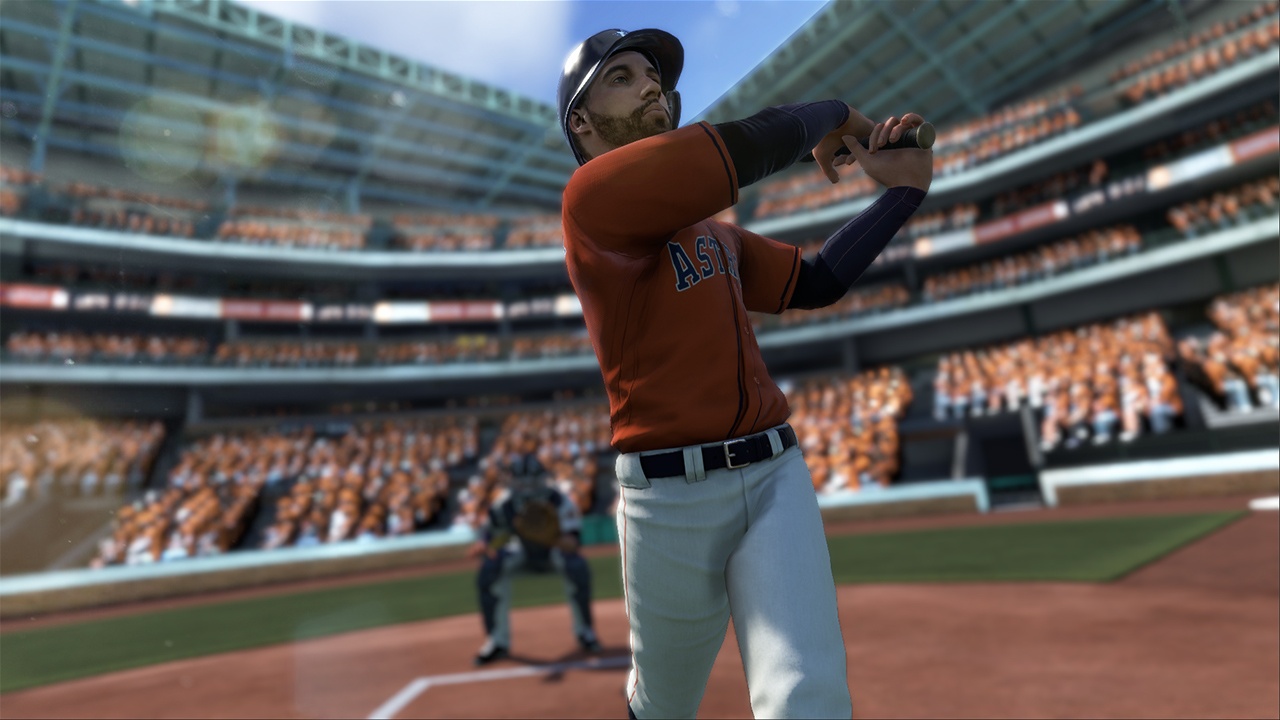 However, its biggest downfall comes in the form of erratic behaviour; particularly around the mechanics of fielding and throwing the ball. Controlling where you wish to throw the ball has been implemented well here, with the face buttons each corresponding to the base of where you wish to aim. It works like a mapped out position of the park, with A being first base, X second and so on and so forth. It produces an ease as to where you want to direct the ball. However, at times and more often than not, the players seem to disagree with your input and stand motionless as play goes on around them.

Unfortunately, it doesn’t end there as the commentary is sorely missing, thus impacting on the atmosphere of the game. Despite containing crowd noises, musical fanfares and call-outs, the rest of the audio presentation during play feels particularly lacklustre and flat. It all adds to produce an air that is never full of excitement or urgency, something that the franchises of Fifa or Madden manage to do well.

Despite some glaring problems within the gameplay mechanics, RBI Baseball 18 isn’t all bad. It is a fun game to play and its accessible simplicity does take some of the more fiddly aspects of the sport out of the equation. It’s main problems lies with the mechanics of its gameplay and the way that they are executed; often leading to an overriding feeling of frustration at never really being fully in control of the action. It’s a shame, as it does do a lot of things right, especially in terms of presentation, replayability and long-term appeal. I can only best describe it as playable, though it falls just short of capturing the true atmosphere of the game; leaving it to fall a bit flat and sometimes, even failing to make a sprint from out of first base.