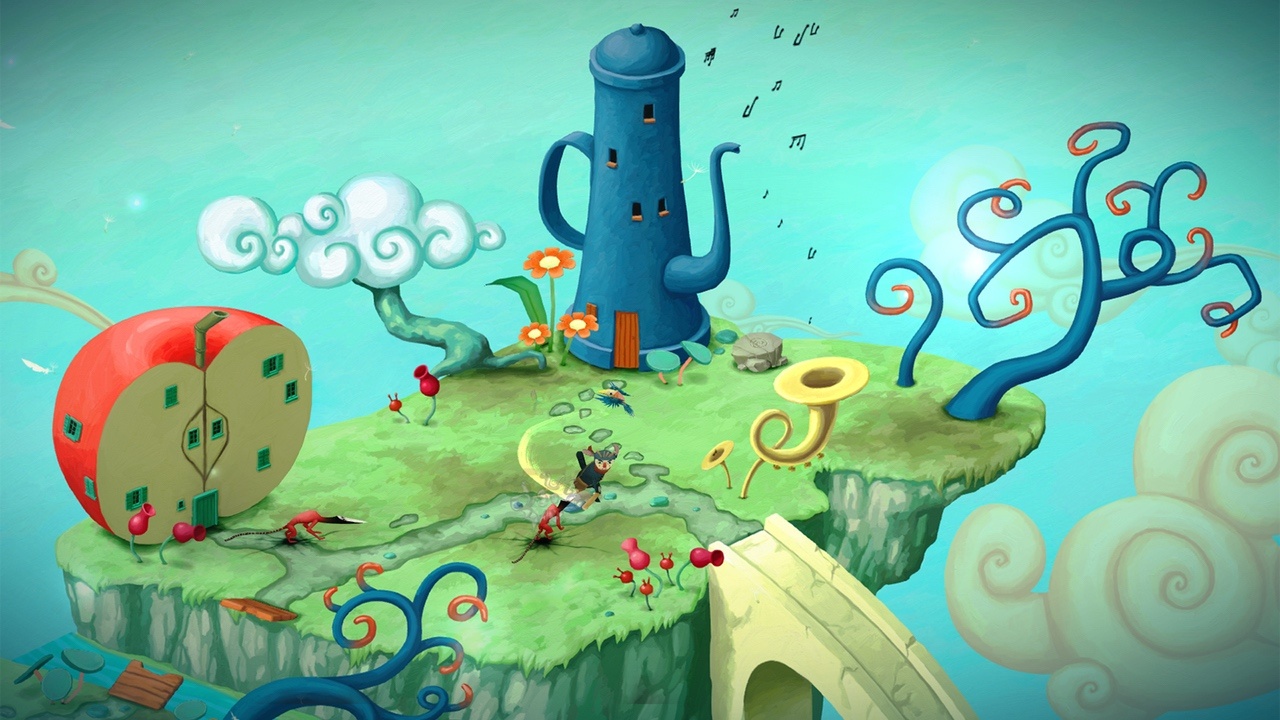 Here’s a question for you. What is it that sparks creativity? For some it may inspiration, other it may be experiences, but the overriding answer is those little figments of our imagination. Without them, we wouldn’t be able to create anything, whether it be a painting, a talent or even writing. And so, with Bedtime Digital Games’ Figment, we get to explore the areas of the brain where these little bits of creativity reside, as their new action-puzzle title makes a brain-wave for the Nintendo Switch.

It’s easy to see that this game takes its inspirations from very surrealist themes, placing us within the subconscious world of memories, experiences and nightmares. You play as Dusty, a character who is the personification of bravery and courage who, along with a feathered friend, Piper, a bird of optimism, fight through three themed areas of the brain in order to combat the fears that haunt them. Although remaining innocent for years, the traumatic experience of being involved in a car crash awakens a number of nightmares that are spreading fear throughout the mind of a young boy. Residing on the outskirts of the mind, Dusty has to dust off his wooden sword and embark on a mystical journey through three sections of the brain in order to put things right.

Each of the levels represent various areas of the mind: The logical left part of the brain, the creative right side and conscious mind. Each of these areas contain specific themes that are based on the mindset within. For instance, the creative side boats lush greenery and surreal landscapes, whilst the logical side resides within a world of clockworks and steam. The conscious mind however, reminds us of the unwanted things in life such as coffee stains and unpaid bills. However, it’s all presented in a bright and colourful world with an isometric view; its graphical representations looking like something from the world of the Gruffalo. 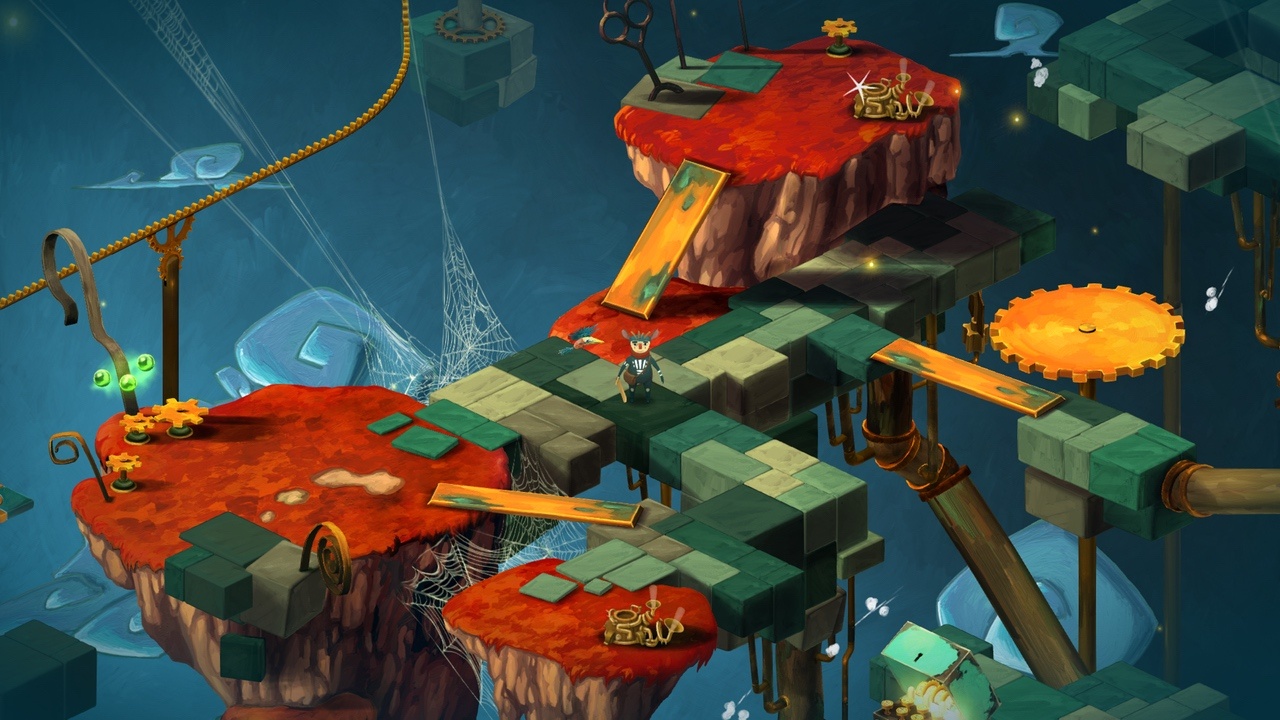 It all adds to give the game a certain charm. However, there are darker, underlying issues here too, with a narrative that is distinctly adult in its tone and a moralistic message that deals with the subject of depression, loss and courage, although it also presents a feeling of humour and fun whilst playing. This is mainly due to the crass nature of Dusty, whose sarcasm, mixed with twist of bitterness, creates a heroic anti-hero who you can’t help but like.

The first thing that strikes you when you start-up the game is the wonderful world of creativity that the game is set within. It’s surreal landscapes contain all manner of weird and wonderful concoctions, from pencilled bridges, dragonflied windmills and dancing bosses! Yes, you read that right, dancing bosses. It all adds to create a world that needs exploring and one that is extremely fun doing so too. The goal of the game is to defeat the three bosses that reside within each part of the brain. Along the way you need to solve all manner of puzzles, as well as fight off the marauding monsters that the nightmares leave behind.

Along with the landscapes, these puzzles also contain a lot of variety within their mechanics. One minute you may be tasked with retrieving an object in order to fix something that is stopping you from advancing, the next minute you are partaking in a memory game or firing projectiles. Whatever the task, the variety on offer here helps to keep things moving at a nice pace, as well as keeping everything fresh and entertaining, with a nice balance in their difficulty levels. However, the combat elements, although quite fun to execute, are quite basic in their mechanic, which can lead to some staleness within its gameplay. 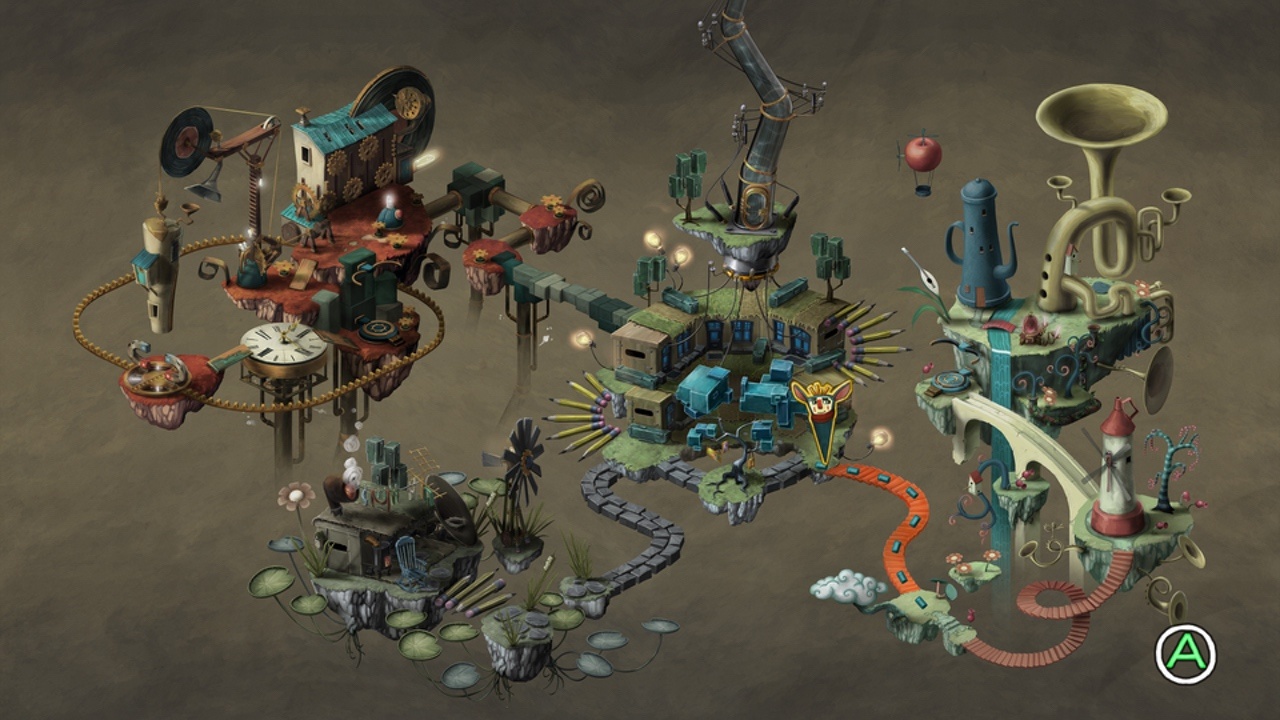 As with the environmental changes within each part of the brain, there are also a variety of different creatures that are housed within. However, when compared to the variance of puzzles, there isn’t a great deal to the enemies, or to how you face them. Its main premise revolves around dodging and timing your strikes in order to reduce damage to yourself, yet dish out the pain to the maximum effect to the nightmare or phobic creatures that inhabit the imagination. However, the boss battles do provide a spectacular challenge, often breaking out into some impressive songs, whilst you try to manipulate the environment in order to deal the pain. These battles are some of the best elements of the game, making up for the staleness of the smaller fights.

To fully compliment the world in which you explore, the game’s soundtrack is also taken directly from the top drawer. It’s musical tones match the environments perfectly, even interacting with your actions as you walk past a particular instrument or hit a piano’s key. It’s very cleverly implemented as your actions fit in with the rhythm of the soundtrack and greatly enhances the experience, as it truly brings the world around you to life. As I said, it’s very clear to see the creativity that has gone into this game, often producing moments of wonder at how the developers could even conceive such an idea.

Overall, Figment is an extremely imaginative game that is close to being a masterpiece. It only falls short from a distinct feeling of emptiness within the various segments of the mind as, although other characters exist, you never get to see them or interact with them as they only appear as voices from behind closed doors. The combat segments also contribute to this as, although there is some variety in the monsters encountered, the mechanics of fighting them remains the same, with only the impressive boss battles being a saving grace. However, despite some minor flaws with the overall presentation of the game, do not let these put you off from playing, what is, an absolute masterclass in creative gaming. It’s worlds are stunning, the puzzles finely tuned and balanced and, despite its adult tones and underlying messages of mental illness, presents a game that is extremely fun to play throughout its six or so hours of gameplay.