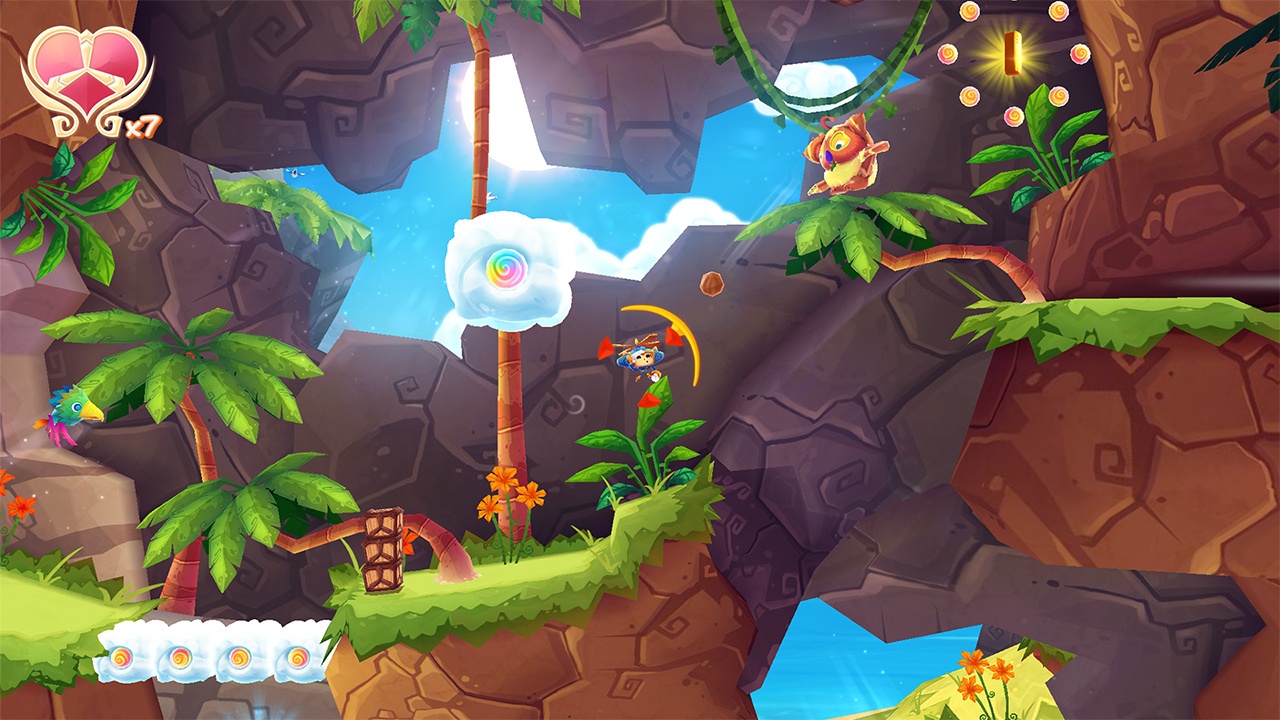 Comparing games to other games is sometimes a bit of a tacky process in-game critiquing. On the one hand, making something comparable to another great title is certainly a mark of quality, but it also belies the hard work that the development team put into their arguably original title. Additionally, it makes for some really sloppy and lazy analysis: simply pegging something as “Dark Souls but” or “Skyrim with” or “Call of Duty for” is the lowest fruit you can imagine, and just capitalizes on buzz words and fads. Still, when a game really evokes a certain idea or aspect, it should be recognized and pointed out, because that could be the hook that other players need to give a game a fair shake. So, when I say that a game is Owlboy meets Yoshi’s Island with some Katamari Damacy graphics, maybe it’s time to sit up and pay attention to Heroki.

Heroki starts in the village of Levantia, which is a floating town where everyone can fly with the aid of head propellers. The villagers of Levantia have this great amulet called the Emerix, which houses untold power and they just keep it around for looks or something. Naturally, their nemesis, Dr. N. Forchin, has chosen today, the day that little Heroki is getting his flight training finished, to steal the amulet and go do something evil with it. The villagers and the chief look to Heroki to be the sole savior, because N. Forchin might suspect a whole army but never a single, plucky hero with a heart of gold! Anyways, Heroki is tasked with retrieving the Emerix, which means he has to power up through different training and skills prior to attacking the fortress where the Emerix is held and saving everyone. Good luck, little dude!

Heroki plays out in a longform set of compartmentalized, widely splayed out levels where the technical goal is just to get to the goal ring at the end of the world. Heroki can fly in any direction and, initially, has two “attacks:” plummeting from the sky to break certain things, and picking up boxes to throw at enemies. Eventually, Heroki will unlock additional skills that allow him to Dash and Bash enemies, and the inventor of his village will create powerups like Shields and Aeroblades for him to be a bit more versatile in his rescue quest. Additionally, if Heroki really wants to unlock all those cool new attacks and skills, he can’t just blaze through the level: he has to find the five medallions hidden throughout the level, sometimes in secret pits and breakaway walls. Other collectibles include spelling out his own name and picking up coins that generate extra lives and, surprise, are used to purchase all the cool stuff the inventor makes. That’s still a logical separation with these types of games: “We need you to save us all, but pay us an honest wage as your salary for being the hero is literally our thanks.” Whatever, coins are so crazy plentiful it almost doesn’t feel like currency. 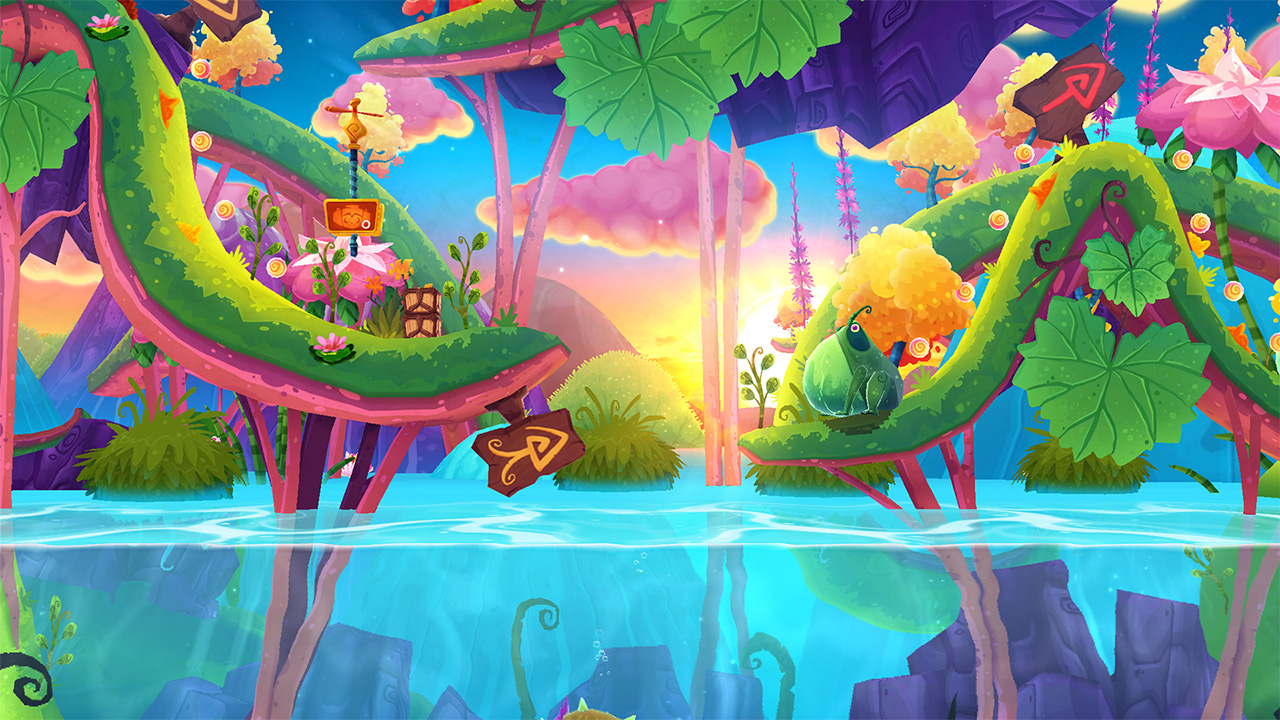 Getting into the movement and control scheme of Heroki is pretty simple from the beginning. Our little flyer is quite accurate in getting up and zipping between tree boughs, enemies and errant clouds that he doesn’t feel like dealing with. The freefall drop is mostly okay, but there’s a small bit of wonkiness that comes with the joystick. You’re supposed to be able to freefall and control your left or right descent, creating a cool bouncing effect when hitting multiple clouds/switches/whatever. However, if you accidentally nudge the joystick too far up when leaning left or right, the game reads that as an up input and immediately cancels the freefall, which can lead to a little frustration when getting certain bounce combos going. Additionally, the throwing mechanic, in theory, is easy and works out great: grab crate, hold grab button, aim and release to fire. But the movement and the aiming is the same joystick: no twinstick action for Heroki from the start. As a result, there can be some leftover momentum when you are trying to fly away from a grumpy parrot or a vicious panda and you’re aiming might take a moment to calibrate itself. Now, most of the enemies are far from vindictive or quick-witted, so this generally isn’t a problem in terms of getting the shot off without getting hit. It’s just a little annoying to have to account for leftover rolling in order to successfully hurl a crate.

But once you get the hang of what you’re doing, Heroki is ridiculously addictive and fun in it’s setup. You’ll always be able to find four medallions the first time you play through, and you will usually be able to spell out HEROKI through floating letters. The treasure chest of bonus goodness should usually be easy enough to find, but you will, almost assuredly, approach each level only one of two ways. Either you’re going to blaze through the stage and get a sort of passing grade, or you’re going to take these five-minute levels and stretch them to twenty because you’re hunting for where the hell that last medallion is. The crazy part is nothing ever feels like it’s being purposely obtuse or covered up: simply a careful eye and a chance to slow down once in a while is what will get you what you seek. The whole thing is a grand collect-a-thon that’s right on par with the aforementioned Yoshi games: some players will get 100% the first fly by, others will need a couple of swings.

And I love the look and sound of Heroki. The plot itself isn’t too heavy, since the Emerix doesn’t have caveats like “keeps everyone alive” or “locks away a cosmic horror” attached to it, just that it’s super important and powerful and the bad Doctor finally took it. The soundtrack is this light, colorful melody that keeps taking me back to the prime days of Nintendo 64, where we realized that dark and gritty didn’t work and even the right color of pastel was attractive to the hardiest adult. And I kept going back and forth between whether Heroki reminded me more of Animal Crossing or Katamari in design, but the big-headedness and the magical talking beard of the elder finally won me into a Damacy mindset. The whole situation is presented in this inoffensive and elegant way that encourages players to be excited, relaxed and ready to spend several hours questing through multiple terrains. Want to do mini games or sidequests? We got those, you don’t have to, but they’re there! Hoping for some utter silliness? Yea, the people you meet are crazy, but in a good way! 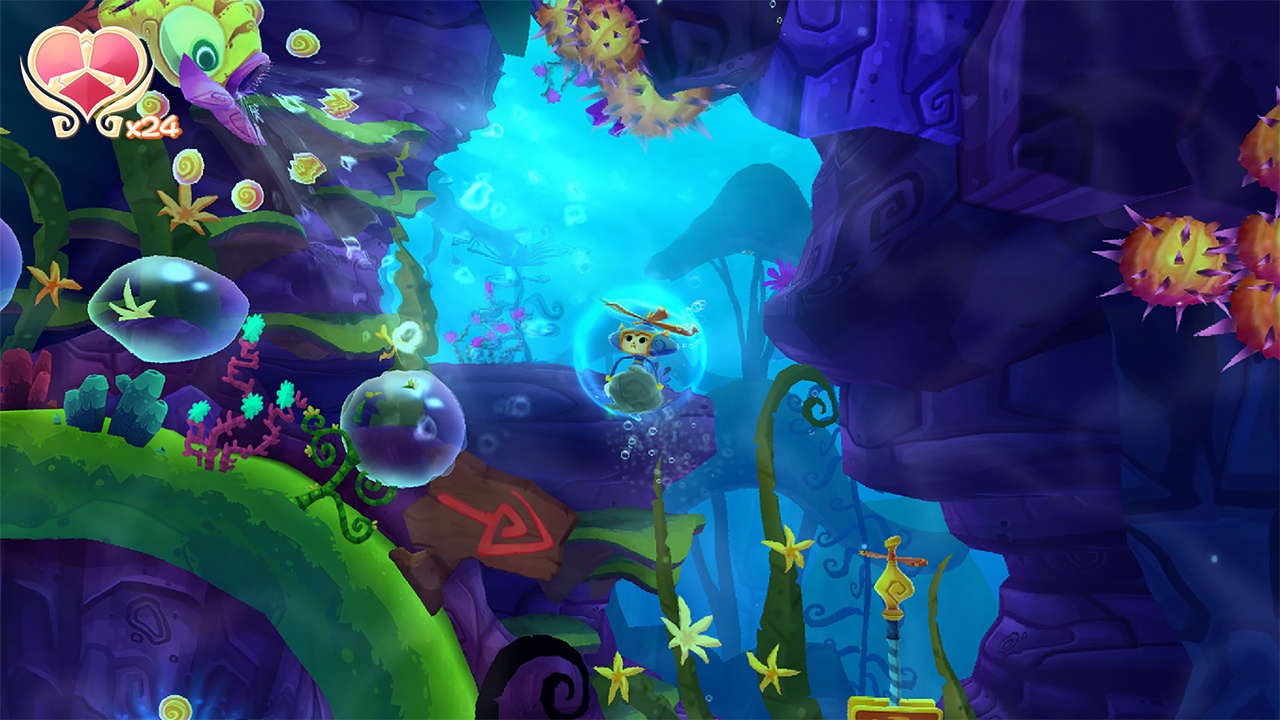 Lastly, Heroki’s developers, Picomy, really went to the mat to make sure their mobile adventure became a great port for the Nintendo Switch. Not only are the graphics crisp, clean and smooth, but the careful use of HD Rumble gives an air of great care on the part of those who want to connect with Nintendo fans. I had never heard of this game before playing it, and I was stunned to find out that it came out three years ago, when I used to game almost exclusively on iOS. But Heroki gets a second chance to make a big splash on the eShop store front. The game runs beautifully, the presentation is clearly intended for the Switch, and the price is exceptionally nice considering how many levels and how much time I’ve put into this game already.

There are plenty of reasons to avoid a game: lack of time, too high a price, no interest in the title. Fair enough, I get that. But Heroki makes a great argument in all three directions, offering a bit of something to everyone and doing so in a way that’s memorable and joyful. I give Heroki a solid seal of approval for such an adorable indie title, and I recommend everyone give it a shot when they have the time.