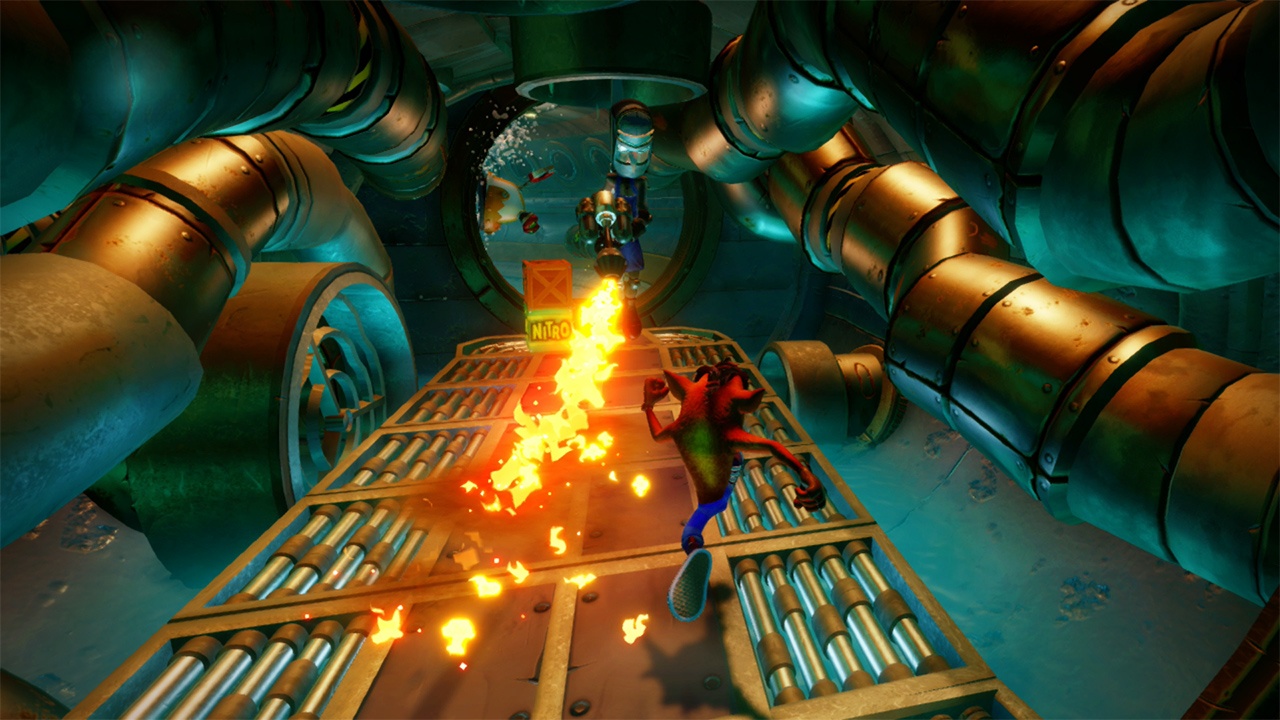 Crash Bandicoot is an icon from the 90s that embodies different things to different folks. For Naughty Dog, it was the beginning of a wonderful and weird relationship with Sony and their audience in general, and many would argue it was the breakthrough that allowed the company to flourish. For Sony themselves, this was their potential cash cow: they finally had a mascot to rival Mario and Sonic, and made a point to brand it as such. And, for Nintendo fans, it represents one single word: spite. Despite the fact that one of the greatest Mario games of all time was released in the same MONTH as the original Crash Bandicoot, it was clear that Sony was gunning for some kind of reaction from Mario. From the flippant print ads to the brazen television commercials, Sony was determined to rub Crash’s attitude and concept in the faces of everyone, and it worked in a pretty big way. From 1996 to 2010, Crash appeared in quite a few games, including his own kart racing titles (!) and some weird crossovers with Spyro that ended up on the Gameboy Advance (!!). Now, eight years later, Vicarious Visions has brought Crash back from the dead, onto the Nintendo Switch, and the spite is still very real. But damn, is it well done.

Crash Bandicoot N. Sane Trilogy is an updated, remastered and re-recorded version of the first three Crash Bandicoot games (Crash Bandicoot, Cortrex Strikes Back and Warped). The plot of all three kind of runs a bit of a gamut, but the main idea is that Crash is a mutated bandicoot (which is a real animal!) that’s escaped from the evil Dr. Cortex. Dr. Cortex wants to take over the world, Crash and company would prefer that not happen, and Crash would also like his girlfriend, Tawna, to not be kidnapped by Dr. Cortex. Over the course of the next three games, Crash will defeat a small army of berserker animals, overthrow Cortex, be convinced to help Cortex, be surprised that Cortex was actually double-crossing him, find out that Cortex is actually controlled by an evil witch doctor’s mask (a fact told to Crash by a good witch doctor’s mask) and then go hurtling through time. As we are looking at the trilogy as a whole, it’s best not to sit too long and analyze the different details of the different games, plot wise: they were all made prior to 2000 and, as such, are insulated from critiques regarding nonsensical story telling and bananas reasoning. Hey, it was the 90s, weird games were happening everywhere. 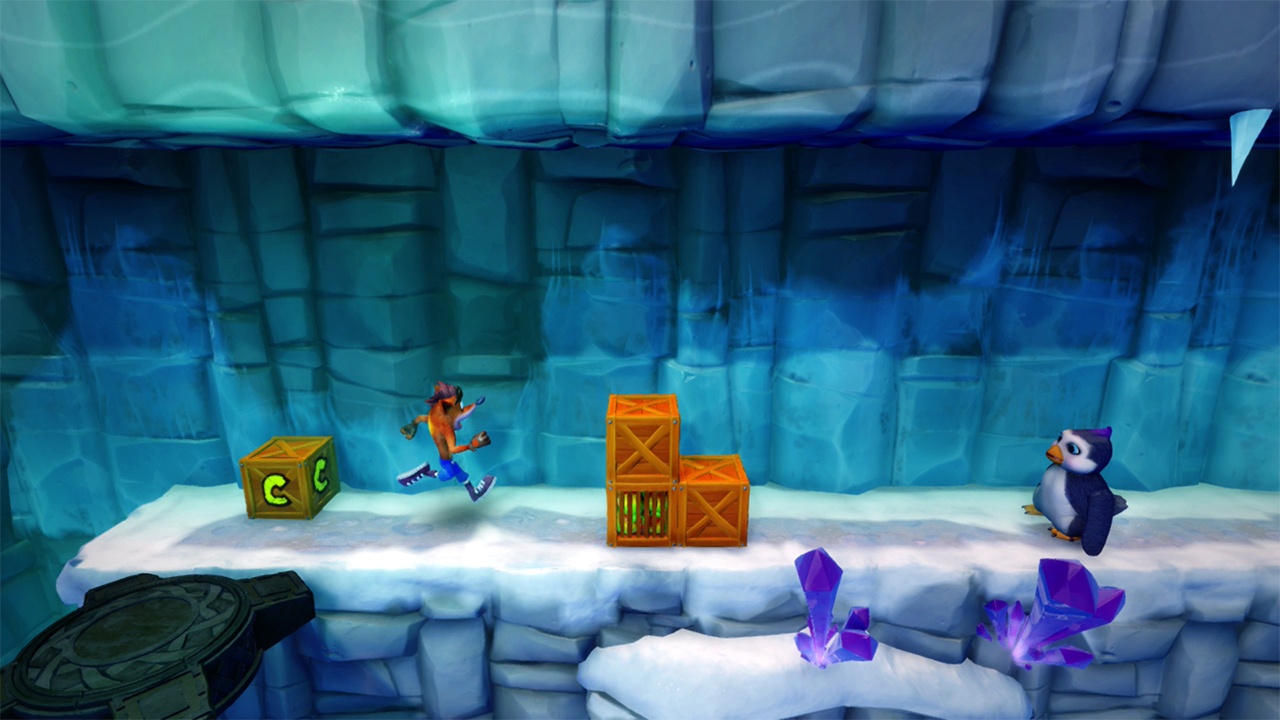 The gameplay of Crash Bandicoot is a really great interpretation of 3D platforming, and it’s one of the reasons the games were so successful when they launched. Even though Mario 64 was able to win players over with wonderment of good gameplay and execution of 3D movement, there was still some obvious limitations with the graphics and ideas. Crash Bandicoot made sure to look at the limitations of what the original Playstation could accomplish and adjust accordingly. For example, rendering these large levels but actually making them quite forced and small with pathways and tunnels that really only could go one way. This was super innovative at the time, and only got better when the developers realized how important and impulsive players were when it came to smashing crates (which, ultimately, is where Crash’s name originates).  As you move through the vertical, 2.5D world, you have to smash all the crates, either through a spinning attack or jumping on them, in order to achieve a clear gem for the world, and then you’ll go back again later to get even more validation for perfect achievements. This game was the original achievement hunter’s dream: you had a gradually growing percentage meter that let you, the player, know how well you were doing in your attempts to fully understand the game. Even though you could probably rush through and beat the original game in a few hours, actually getting down the timing to get all the crates per level took much, much longer.

While the core styling doesn’t change much from the first game, the second and third games do introduce the option to crouch, which turns into a slide tackle that’s invaluable in more than a few situations. This shows a clear evolution in both how players could control Crash, how the development team was taking in feedback from the players, and how the game was now pushing the limits of what the Playstation could do. The lanes became wider and more complex. The occasional side scrolling stages cropped up more and more, and the boss fights, which were already confusing and  frantic, became even moreso when Cortex Strikes Back landed. I would argue that Cortex Strikes Back is the best of the trilogy, mostly because it falls right into that sweet spot of innovation and execution. The first Crash is great but a bit wonky, with certain areas that simply are goddamned awful (Slippery Fortress comes to mind). The third Crash, Warped, is good and fun, but also just seems to be a bit overlong. There’s a loss of cohesion for both player and concept, which is surprising considering everything comes right out of a singular hub of the Time-Twisting Machine. I think it might actually be an inherent fallacy of having the trilogy: when you played the games separately with a bit of time separating them (and being a hungry child who simply needed that new Crash game), it was all well and good. When you have them all lined up next to each other, however, you begin to see when things are new and fresh, and when things are just going through the motions (at least, in my opinion). 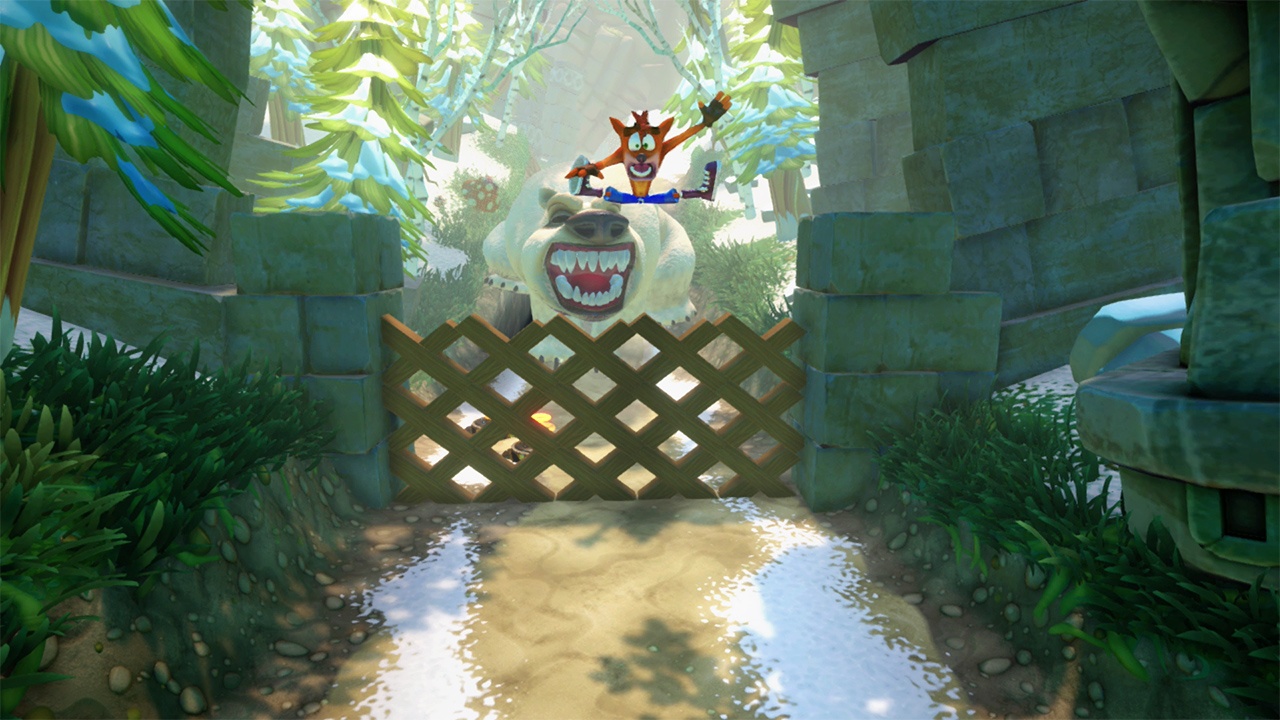 Now, as a game franchise and, specifically, as a new school oldschool title, Crash Bandicoot N. Sane Trilogy is incredibly worthwhile to play. The characters are memorable, the variety in levels is quite engaging, and the difficulty curve is very real and very vertical at times. This is one of those magnificent games where players who simply want to get to the end will be able to, with a little patience, and they can laugh at the buffoonery of certain characters and like the designs, albeit with some necessary skill (riding warthogs comes to mind). But, if you’re a player who likes to see your invested time come to fruition in some way, not only are there items to get to unlock completionist modes, but there are legitimate hidden levels scattered about that vary from crazy intense and engaging to…riding a motorcycle for some reason. Moreover, you’ve also got this great time attack achievement system that gives you silver, gold and platinum for your service and accuracy, and that’s just a wonderful setup unto itself. So if you liked the original games, or if you’ve never played them but are interested, there is SO MUCH Bandicoot goodness here that it’s impossible to be bored or let down by the sheer content amount.

And, as a port, we have to talk about the hard work and gorgeous outcome that Vicarious Visions created. This is also a bit where the spite element that I mentioned up top comes in. You see, Nintendo fans have a bit of a gaslit condition where we believe that just re-releasing the same titles, over and over again, with almost no changes, are what we deserve and what we want. Sure, I’ve bought Earthbound three times now, and I’ll buy it a fourth when it hits the Switch, and what’s the damn difference in any of them? Portability? Sorry, but I’ve been able to play SNES roms on my damn computer, phone and car GPS for several years now. Super Mario Bros. 3 is one of the best NES games of all time, but would it kill anyone to take a swing and try to give it a bit of polish for the new systems? Vicarious Visions, both through necessity and desire, have rebuilt the Crash Bandicoot trilogy from the ground up, and the effect is utterly astounding. These games look, feel and sound beautiful, and the cutscenes, voice acting and enhanced music are sheer rapture. It’s downright impressive that the first game in the trilogy is clearly updated and cleaned up, mimics the first game’s layout to a T, and then delivers an original experience all its own. I can’t even explain how bizarre it is to play Cortex Strikes Back and realize that it’s also an updated port that inexplicably looks better than the first updated game despite being released at the same time in the same software package. It’s like wizardry, and it cannot be overstated how magical the whole setup is. When you also consider the Switch port was almost deemed “too difficult” until a lone developer proved it was possible, you realize that Switch fans were saved at the zero hour because one person knew they could do it, and now we have the whole game, at a very reasonable price, to play anywhere we go, with smooth, sharp, glorious graphics.

Maybe you were a kid in the 90s and you’re looking to recapture all that spent time on the old gray rectangle. Maybe you’re a newfangled Nintendo kid who wants to see what the fuss is about. Maybe you just ignored these games back in the day because a man in a mascot costume screaming at a building wasn’t the best campaign idea. But the love, dedication and serious effort that went into the creation of the Crash Bandicoot N. Sane Trilogy will not be ignored. If you’ve even been mildly interested in these games, do yourself a favor and play this set. It’s well worth your time and money, and I highly doubt you’ll be disappointed.