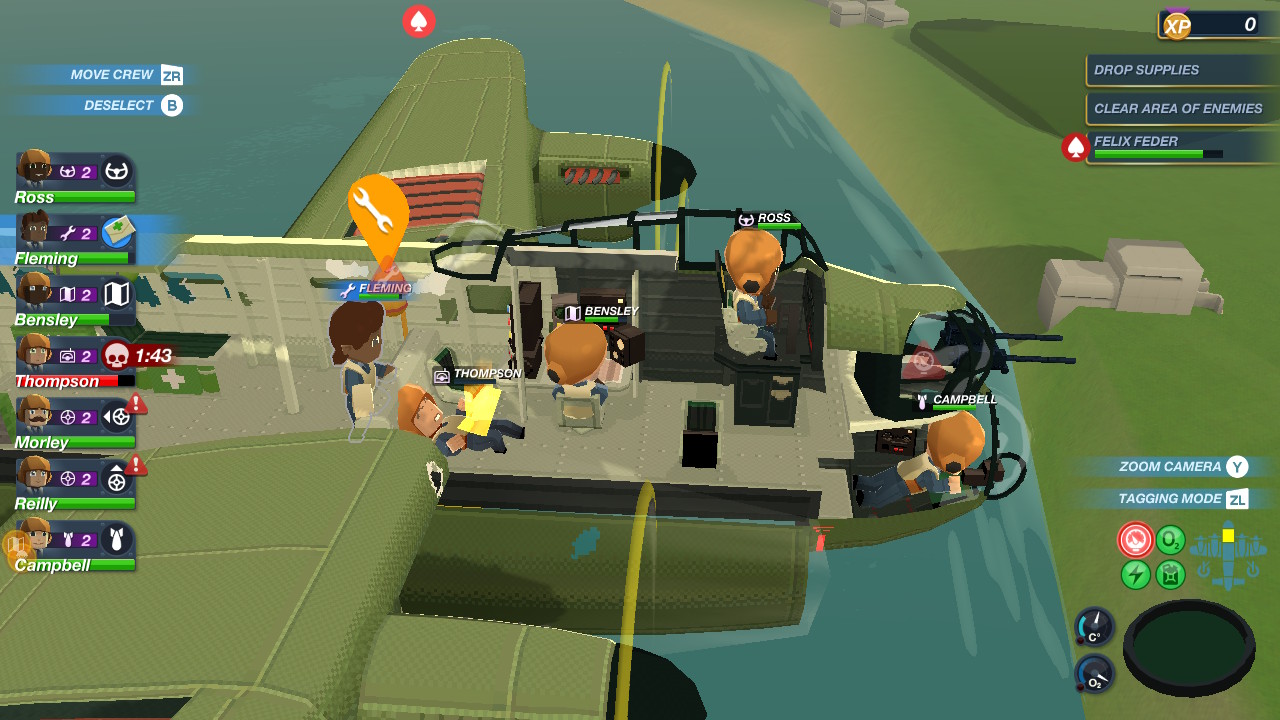 There were many daring missions during the Second World War that defined the course of the conflict; as well as create regimental honours and historical feats of sacrifice and bravery. Many of the battles, or events, of the war have become synonymous with their execution; but arguably, none more so than the daring raids of the Lancaster Bomber crews as they bounced their bombs towards the infamy of the Dam Busters. It required skill and precision to be successful, two of the attributes you’re going to need in Bomber Crew, as it opens it bay doors to drop a bomb of a game onto the Nintendo Switch.

Developed by Runner Duck, with publishing through Curve Digital, this strategic, come survival, come flight sim, tasks you with commanding a full crew as they set about a series of daring missions aboard the iconic Lancaster Bombers. Don’t be fooled by its, rather cutesy, graphical presentation though, as this is a hard-as-nails, split-second decision making ride into hell; much as it would have been for the real crews of the time. It’s mechanics sits somewhere between Subset Games’ FTL: Faster Than Light and Bethesda’s Fallout Shelter, containing a micro-management element, as well as a stat building mechanic with which to strengthen your crew and aircraft.

The games various options are presented throughout a series of buildings set within a British airfield called RAF Woodbridge. With the use of the shoulder buttons, you move back and forth between various departments in order to recruit crew member, kit them out in a variety of flying gear, train them in various techniques, personalise and equip your bomber and receive mission briefings, as well as information around enemy aces. Despite being quite stat heavy and incorporating a number of menus, its interface is extremely easy to use and understand. 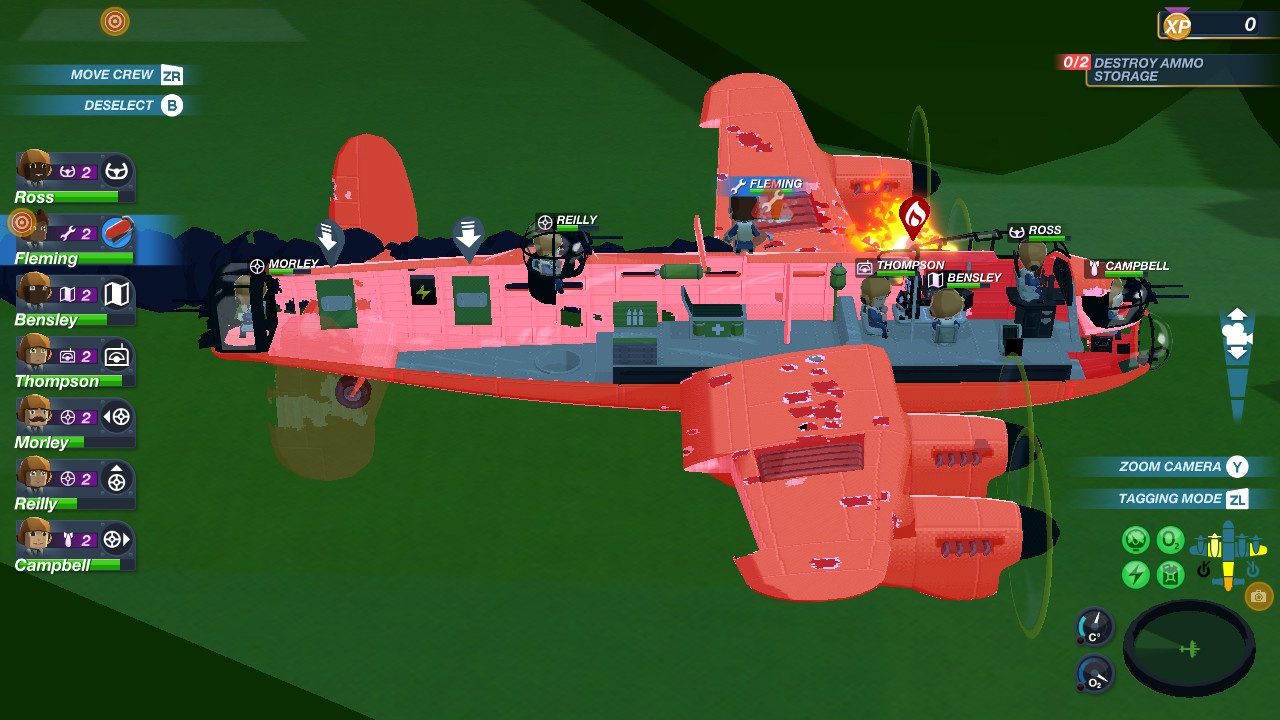 Crews can be comprised from all manner of hopeful recruits; both men and women, each of them possessing certain skills and backgrounds. You can even personalise each of them, changing their names and appearance should you wish to do so. Uniforms also come in a variety of options, offering stat boosts to armour, movement speed, thermal protection, oxygen levels and survival instincts. Then comes the star of the show, your Lancaster Bomber. Again, there is a wealth of personalisation options here, with colour schemes and  artwork with which to decorate your aircraft. You can also upgrade the bomber’s armour, weaponry, systems, equipment and engines, to name but a few.

Mission briefings too, come in a variety of tasks, usually offering multiple quests to choose from. These can range from straight-forward bombing missions to aerial reconnaissance and support strikes to sub hunting. These objectives can also change on-the-fly, often changing mission parameters or presenting targets of opportunity, should you be brave enough, or your crew and aircraft be in a suitable state to do so. It’s all presented in a very charming way, even peaceful amongst the birdsong within your tranquil airfield. However, that all changes dramatically once you and your crew take to the air.

Once you have chosen which mission you wish to fly, you are then presented a cut-out version of your bomber as it sits upon the runway. With each of the crew members sat within their stations, you select between them in order to issue commands with regards to flight control, navigation, target acquisition and any emergency that could arise at any time. From a list that is presented down the sides of the screen, you can select through your crew members, which in turn, opens a window of commands that you wish each individual to adhere to. These can range from starting the engines, flying altitude, deploying the undercarriage, opening and closing the bay doors, flying to waypoints and dropping the bombs. 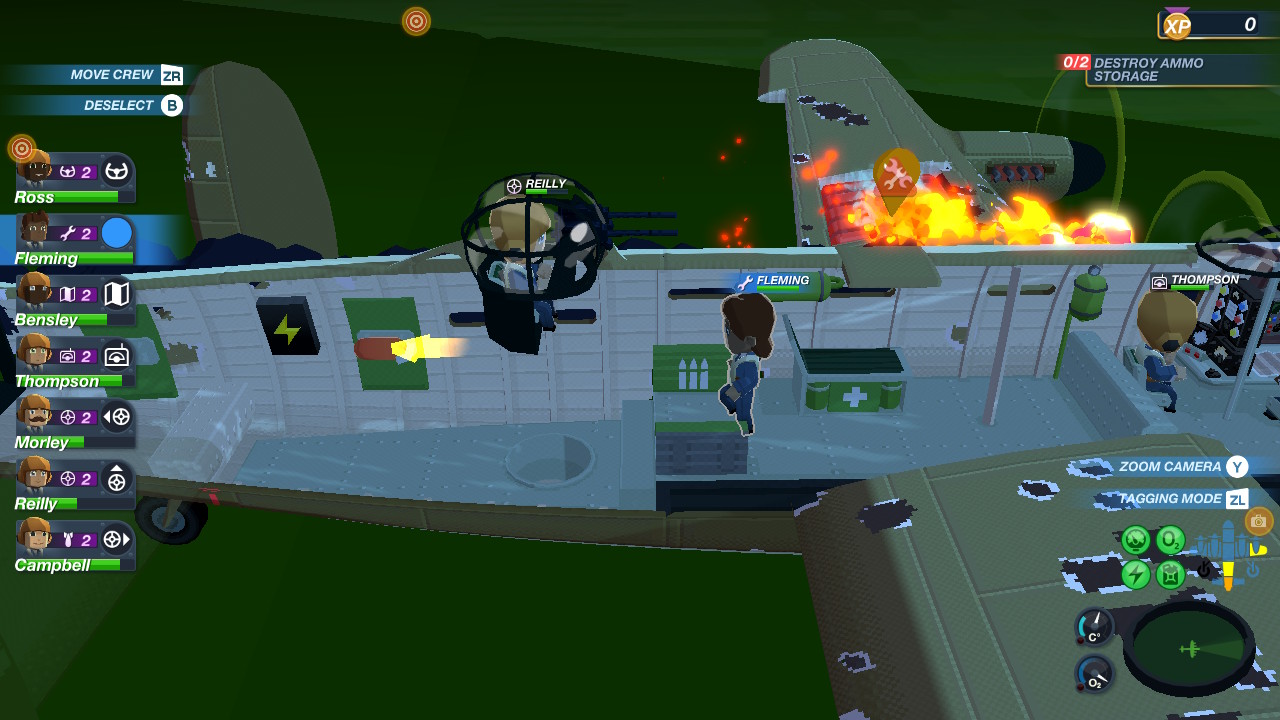 There are so many options here, that your first few sorties can become a bit overwhelming. However, the more flying hours you put into the game, the easier it is to become acquainted to the various options you have at your disposal. Saying that though, each mission is a real seat-of-your-pants experience; often presenting factors that you may not necessarily allow for within mission parameters. These can range from fixing electrical faults, repairing damage or putting out fires, keeping your gunners topped up with ammunition and tending to wounded colleagues. The game can literally throw anything at you, keeping you on your toes and making it essential to keep your wits about you if you want to return home safely.

It’s here that the game shows another form of grabbing you by the fur of your collar, as you work hard to keep your bomber flying and your crew safe. As you become more familiar with your flight crew, the more you begin to care about them; especially if you’ve given them a touch of your own personalisation, often working hard to ensure their safety. Losing a team member, whole crew and even your bomber, can leave you distraught; I even had moments where I teetered on the edge of feeling mournful. It’s this level of immersion and attachment, that makes this game such a joy to behold. It’s a very rare quality in video games these days, yet Bomber Crew has it in abundance. This is further reinforced with memorials set up for lost members on the game’s opening screen.

Overall, Bomber Crew is an astounding achievement; especially when you consider it is just shy of taking up 300 megabytes of your Switch’s precious storage space. It contains such a high degree of depth, that you could simply nose-dive into it; offering countless personalisation and upgrading options to make the game your own. Its missions and flying mechanics are incredibly immersive, giving the game such an addictive quality that it almost becomes a part of your life; thinking of crew members, or how you could approach a given problem better the next time you are in the sky. It’s mechanics work in such a way, that your actions always lead onto another factor that needs to be considered, keeping you mindful of your decisions, yet always pushing you, and your crew, forward in order to achieve success within your mission. The production levels are so high, that this is easily a game that you will find yourself returning to time after time. There are plenty of games out there on the Nintendo Switch that are sublimely playable at the moment, and with the release of Bomber Crew within its ever-expanding library, now contains a title that climbs to such an altitude, that it simply bombs the competition and flies very highly indeed.