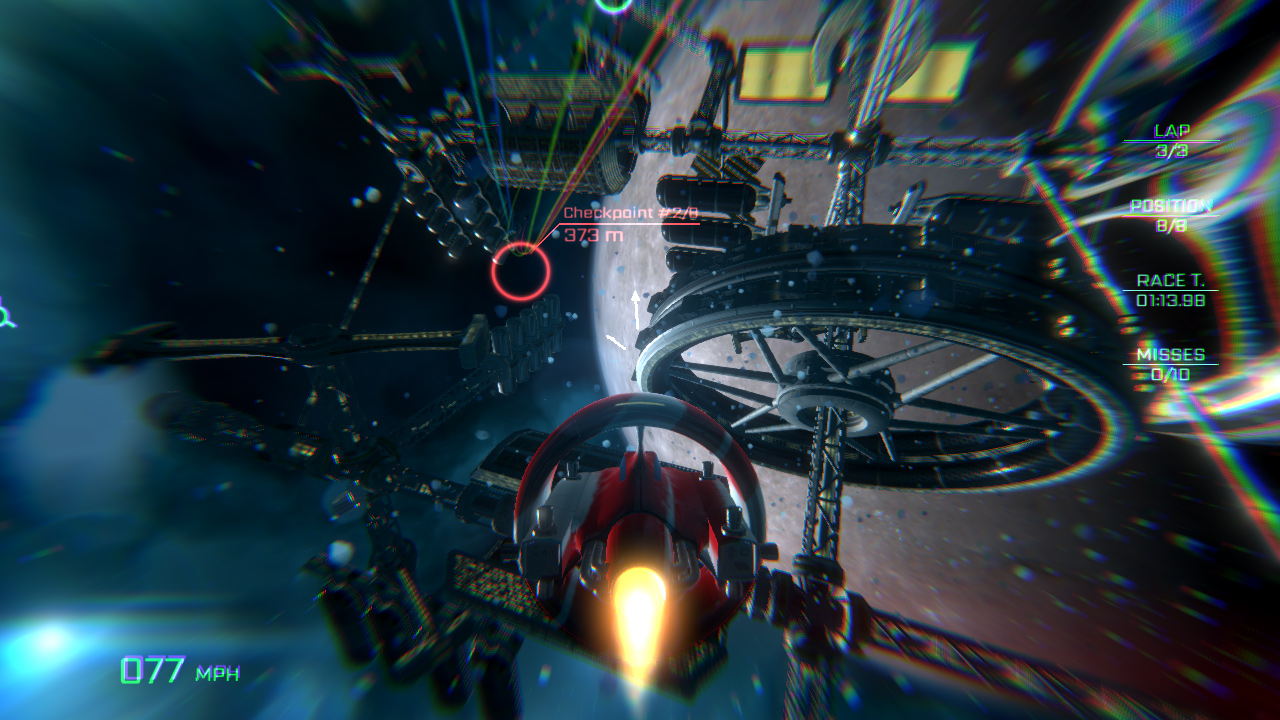 When it comes to the racing genre within video gaming, they all possess a certain generic quality, such as brake, drift and nudge your way to the front of the pack. Some even add a combative element with the use of power-ups to boost your performance, or hamper the development of others. Although still retaining the generic formula of other racers, VSR: Void Space Racing, also brings something new to the table: Physics. Being a racer that is set within the non-gravitational setting of space, it introduces the aspect of inertia; a form of drifting, but one that is created through unstoppable movement, whatever direction you may be flying in.

The roots of Void Space Racing lie within a previously released title, Orbital Racing; a game which released last year upon the PC. Developed and published by SONKA Games though, the original concept has been completely overhauled with new flight models, game modes, improved AI, thumping soundtrack, graphical overhauls, along with the addition of local multiplayer, online leaderboards and full use of the Nintendo Switch’s HD rumble.

The general premise of the game involves running through a series of space-based races in various locales and with a selection of varying spacecraft. Each of the courses are plotted with a series of rings, each one navigated through the directional capabilities of an on-screen HUD, as you compete against ten other racers for intergalactic glory. With eight varying courses and a variety of ships at your disposal, as well as three difficulty levels, a time trial, single racing and local multiplayer, there’s plenty here to keep you racing amongst the stars. 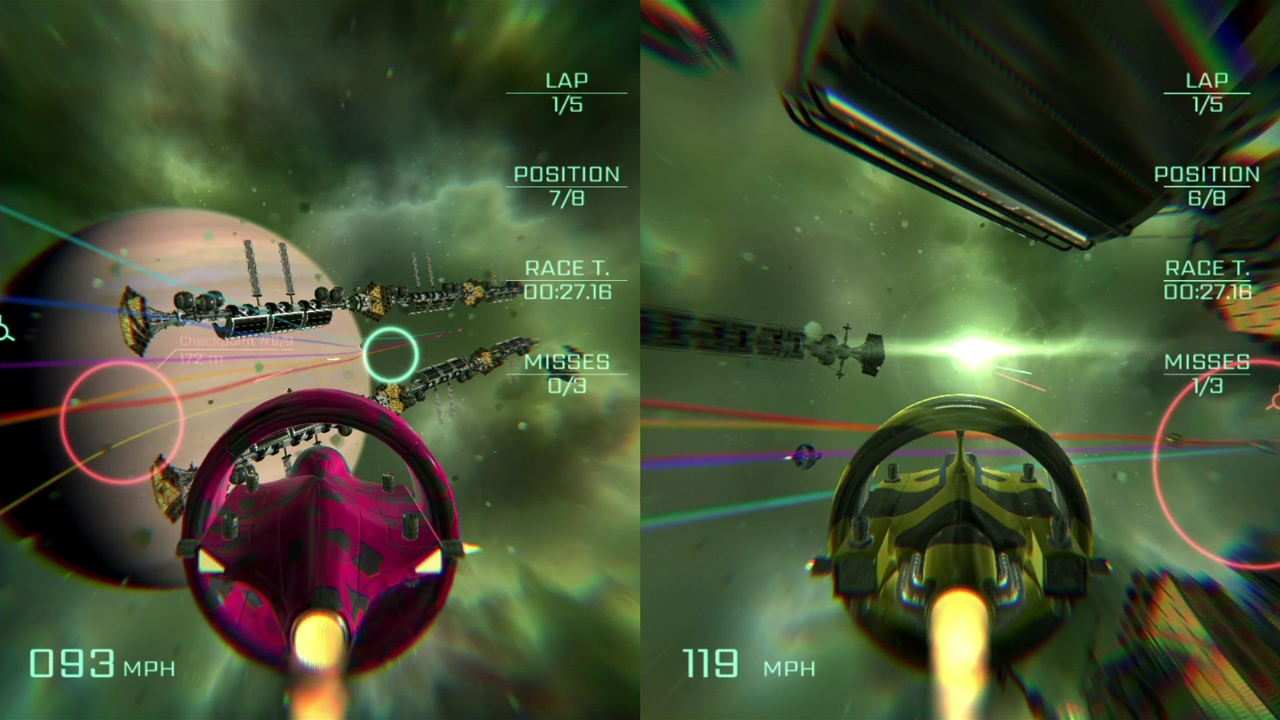 The main play mode of the game comes in the form of single races. There’s no championship, or running competition. You must simply finish in first place in order to unlock the next course, or a new craft. However, this isn’t as simple as it sounds, thanks to a physics dynamic that causes inertia, or for your craft to carry on along its trajectory until it reaches a speed where it can change direction. It brings a new element to the style of racing that we may be used to; one that requires a certain amount of dexterity and control in order to be victorious.

Against a group of ten other racers, the course is plotted through a series of colour-coded rings: red showing the next ring to pass through, blue ones showing the rings that follow next. In order to help navigate the course, two arrows in the centre of the screen help to direct you to the next series of rings that need to be triggered. However, should you miss ten rings, then its race over. With its emphasis on the physics of flying through space, lining up your craft in order to pass through each ring, or to stop yourself from drifting off-course and crashing into the debris or structures that surround, is no easy task; especially when you first start to play.

It takes a few races to get used to the control scheme, or at least the physics of your movement. You have control of acceleration and deceleration, mapped to the A and B buttons respectively, as well as the ability to roll your craft with the ZL and ZR shoulder buttons, and you need to quickly work out the best scheme of controlling your speed in order to succeed. However, other factors can come into play, such as contact with other racers and traversing small corridors through asteroids; the slightest of contact, sending you spiralling out of control, losing precious seconds from achieving a respectable finishing time. Saying that though, after half an hour of experimenting with the control of my craft, I managed to top the online leaderboard.

As well as a single race option, you can also play through a time trial. It runs along the same premise as the single race, only this time you race against the clock, rather than AI opponents. In fact, despite what game mode you might be playing, the general racing mechanics of the game feels very close to that of a time-trialled style of game. It’s not a bad thing, but it does take away some of the feeling of being involved in a serious race. 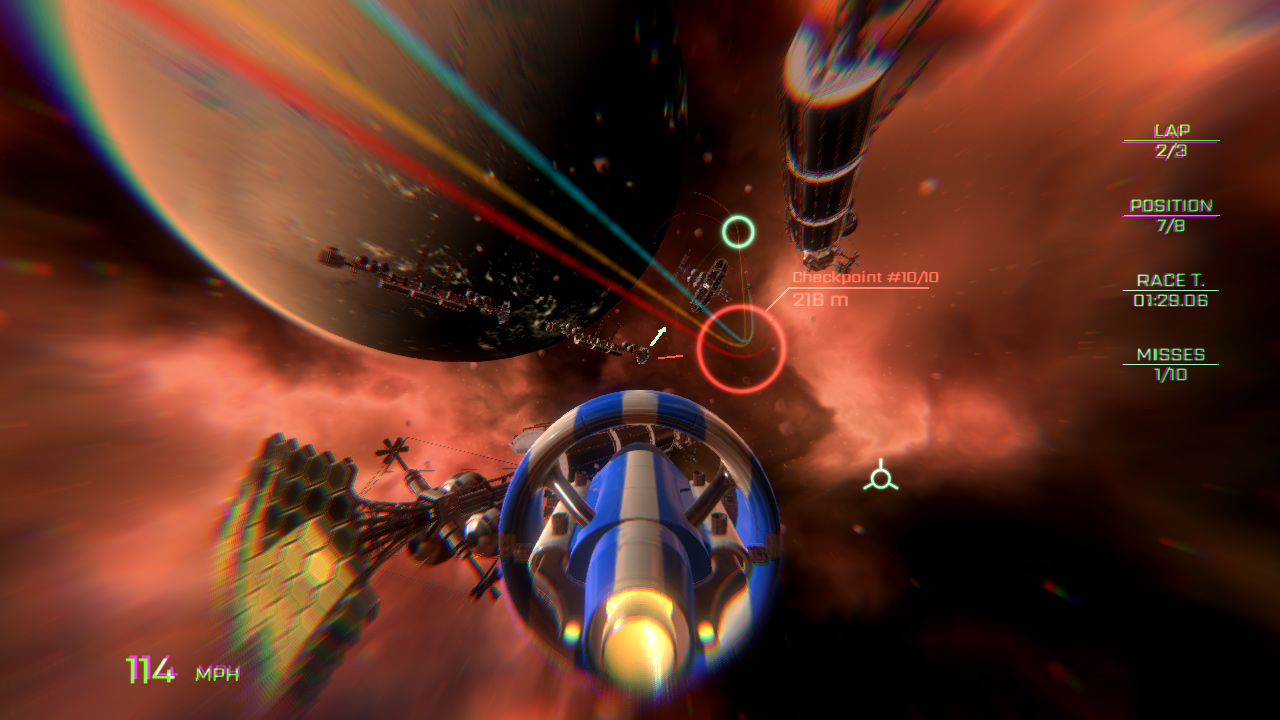 With each difficulty level per course, you are awarded a star in either gold, silver or bronze; depending on your finishing position. Gain pole position though, and you’ll unlock the next course. As well as this though, each course also contains an online leaderboard which posts your time against other players in the world. This adds an element of gameplay as you, not only compete to unlock and open up more of the game, but also strive to improve course times in order to rank up the leaderboards. It adds a touch of competitiveness that keeps you playing; adding a replayability value to the game.

This can be further enhanced with the inclusion of a split-screen local player capability. By using one joy-con each, you and a friend can compete with each other, as well as the AI racers, for the right to brag. It doesn’t add anything different to the formula of the game, but does allow any bystanders to join in the fun with you. Although its options are limited, the graphical presentation of the game produces some stunning space-scapes, from racing around space stations, through asteroid fields and over mining installations, it’s unity-run engine produces some very pleasing aesthetics indeed; although it’s blur-effects for speed enhancement can appear a bit fish-eye lensed at times. This is further added to with an electronic soundtrack that perfectly matches the pace of each race.

Overall, VSR: Void Space Racing provides a solid little racer, with a series of courses that are fun to navigate. Learning the physics of control can be rewarding, as is achieving a respectable score upon the game’s online leaderboards. It’s suitably challenging for those who are looking for a hardcore racer and it’s setting is very different from anything else that is currently available. If there any gripes, then it would be that some races can feel a bit empty, thus producing the time-trial feel to the gameplay and it’s a bit thin on content when compared to other racers, plus a small bug was present when playing for this review, with the ability to view the leaderboards being non-functional. It’s only a small fault and hardly game-breaking, but I’m sure it’s something that will be fixed upon release. In terms of its generic qualities within the genre though, this game presents a very smooth experience, with tight controls and a good sense of speed. If you’re looking for a racer that’s a bit different to the norm, as well as present a good challenge, then this is a game that will provide that in casual, but fun, bursts.