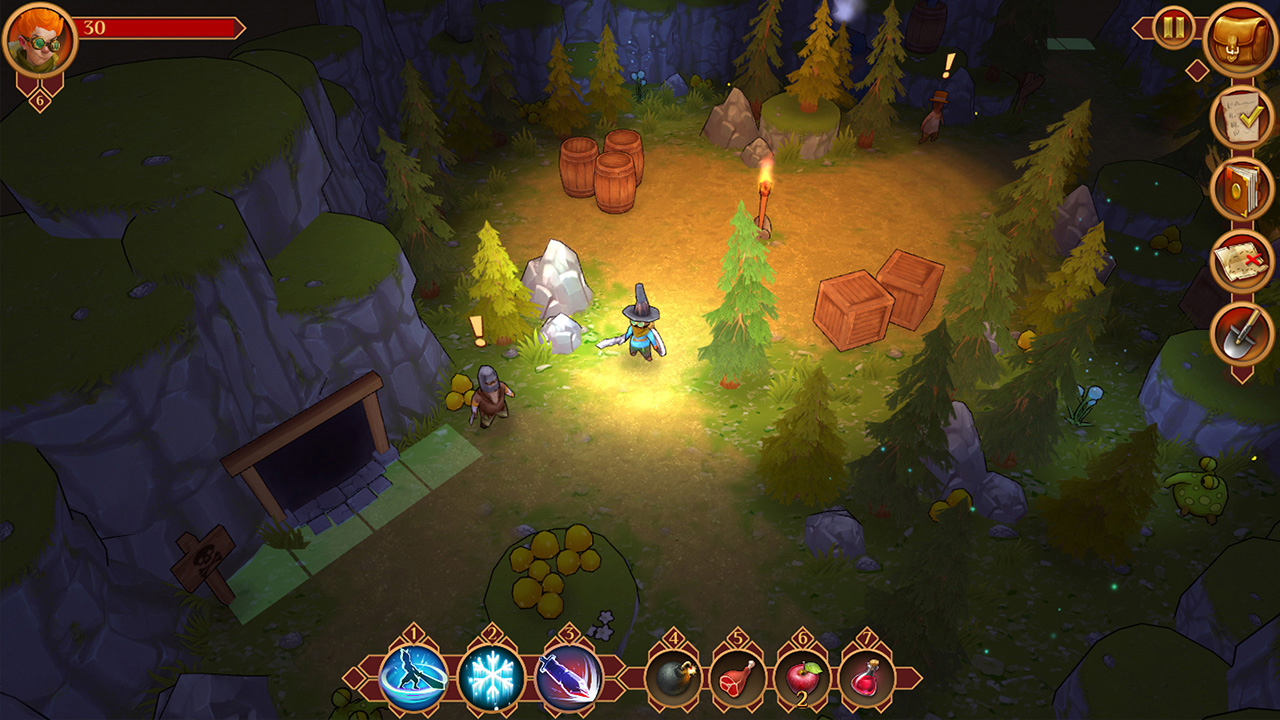 When it comes to the majority of action-orientated role-players these days, they comprise of so many mechanics and finely-tuned elements, that they can become a bit overwhelming for the novice gamer or younger audiences. This in turn can lead to a disinterest in its genre, which is a shame, as many of the best titles that are available these days belong within these particular styles. The fact of the matter is, there aren’t many games available that contains the depth or streamlined story to maintain an interest for specific audiences that are looking for easily accessible adventure. However, worry not would-be explorers, for 2 Zombies’ new title, Quest Hunter may just be the game you’re looking for as it explores a release onto the Nintendo Switch.

This isn’t necessarily a title that has been developed exclusively for new gamers or younger players though, as it contains a wealth of depth, an intriguing story and a pleasing aesthetic that will make it appeal to just about anyone. The beauty of this title lies in its accessibility, making it a perfect starting point for anyone who is looking for an introduction to role-playing adventures; yet also holds enough to keep seasoned explorers engaged too. There’s nothing too demanding here, or particularly complicated, yet it’s need for exploration, material collecting, crafting, combat and weaponry, as well as a sprinkling of humour, ensures there is enough content and depth to keep you playing over the long-term.

The story follows the exploits of your character, whom is semi-customisable to produce a look that appeals to you, whose airship has crashed in a strange land after the sun is blanketed in a shroud of darkness. As you awaken amongst the wreckage of your stricken ship, you begin to explore the region around you, learning that there are dark forces at work here and in order to find a way home, you must embark on a journey to unravel the mystery, as well as provide a helping hand to the residents of this strange and stricken land. With the game’s story revolving around the blockage of the sun, the game plays on the mechanic of using fire to guide the way. It works on a number of fronts, from lighting the area around you to warding off the creatures of the night, as well as providing a guiding path that can be easily followed. 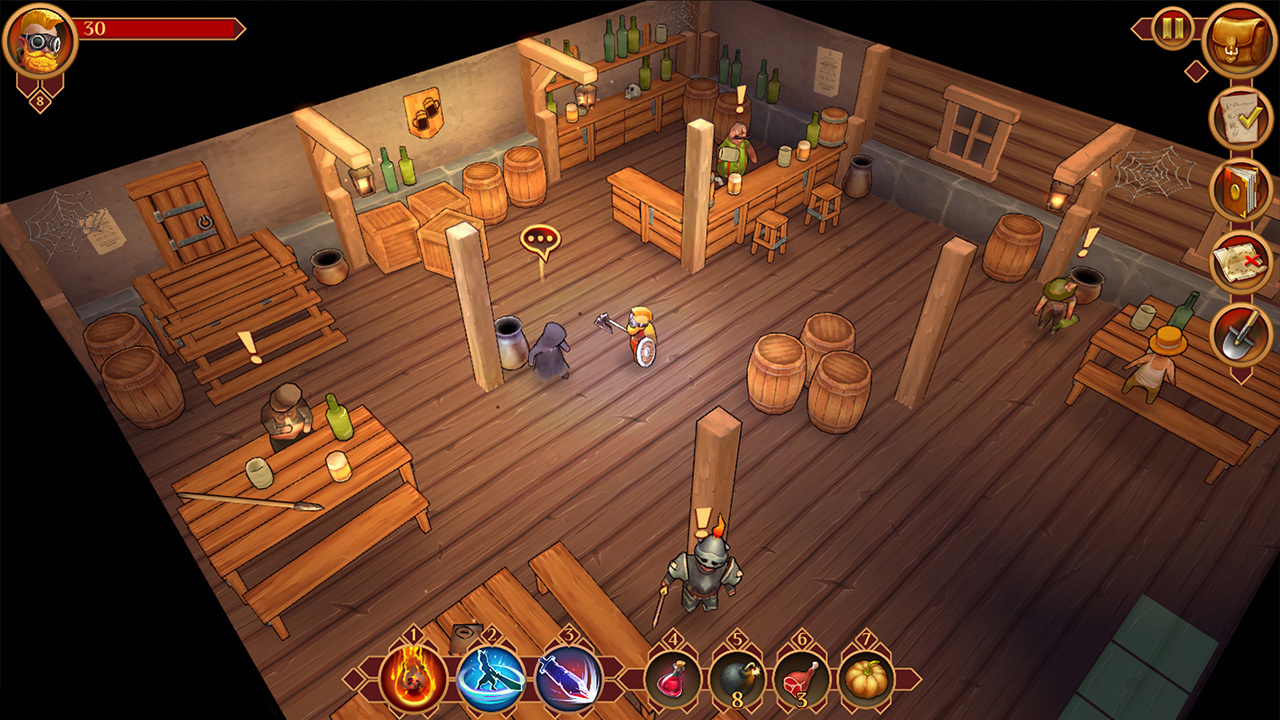 The first thing that strikes you about the game is its cartoon-styled aesthetic. Everything takes on a hand-dawn look, with vibrant colours and bold, black lines that outline everything. This in turn, produces an appealing look for younger players, as well as an easily distinguishable art-style that makes everything appear crystal clear. There’s also some nice lighting effects in use here, one that hues a gentle glow to light up your surroundings. There are many elements that need exploring within the game, something that this title actively encourages you to do. First and foremost, this is a game that needs to be explored, either through adventuring or through thorough investigation of each area that you find yourself in.

The gathering of resources and crafting is vital here, making it an important asset to chop down as many trees as you can, or smash open crates or splinter the rocks into stones. Crates, barrels and chests can be found in abundance, each one randomly housing all manner of treasures, from gold coins to crystal jewels; all of which become important in crafting and purchasing vital equipment, such as torches, to levelling up your character through a series of combat abilities and numerical values for your health, attack power and so on. However, many areas also contain a number of NPC’s, many of whom possess a task of some kind for you to perform; whether it be lighting a series of torches or exploring the randomly generated caves and dungeons to rescue a stricken explorer or find a particular object.

All of these elements combine to make up the core values of the gameplay. However, the land is also infested with all sorts of creatures that need to fought off. In general, the combat elements of the game are probably the weakest of all its mechanics. Despite containing a series of moves that are mapped to specific buttons, or a variety of weapon styles, the combat is largely basic in its execution. Again, the fire by torchlight can play a crucial role here, as if you stay within the radius of its light, then many of the enemy types won’t come near you, allowing you to pick them off as they gather by the edge of your torches beam. However, it can a different story in the dark and dangerous caverns and dungeons that frequent the land, although the rewards are often more rewarding should you succeed here. 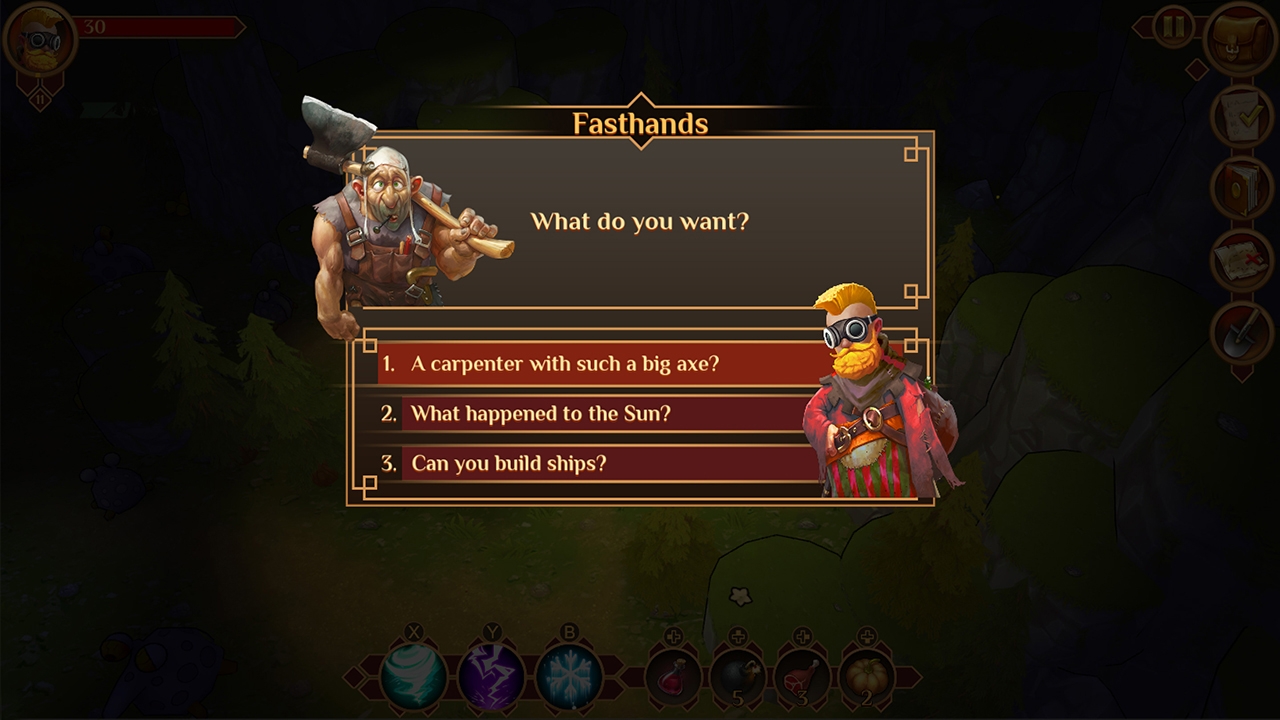 From your base camp, you begin to venture out in your search for quests, uncovering locked gates and impassable areas that require specific items in order to pass. Some of them require keys, whilst others revolve around the solving of certain puzzles. Again, there’s nothing here too difficult here, with solutions often based around the use of light or the placing of specific blocks to trigger effects. Everything all works together to produce an easily accessible game in how it all works, as well provide some form entertainment if the constant search for quests, uncovering of treasures and constant levelling and crafting that betters the base stats of your chosen character.

There’s also a myriad of menus, which are, again, easily navigated and distinguishable. However, saying that, they do also contain some minor distractions, namely with a number of options or choices within them that aren’t necessarily clear in their intention; although in time, you soon learn all of their functions. For instance, you can store items in your base camp, as well as carry items in your handy bag. However, when presented with the menu for switching items, you are presented with a number of pictorial depictions of certain functions. There’s no textual guidance here and it can take a second or two to work out what each picture is trying to convey. Admittedly, it’s only a minor nuance, but it’s still a nuance all the same. The real jewel in its crown though, comes in the form of its co-op capabilities for up to four players at one time. played either online with friends or, better still, with up to four people locally on a single screen, you can embark on your adventures with friends, family and even offer a guiding hand for your children. It’s in this mechanic, that the game adds a whole lot more to its experience.

Overall though, Quest Hunter does provide a good form of entertainment for fans of action role-players. However, the game doesn’t necessarily bring anything new or innovative to the table and in a lot of its functions, it’s quite basic. Where the fun lies here, though, is in its exploration, puzzling, crafting, sourcing and a clever usage of torches to light the darkness. The combat is largely weak, but does serve its purpose and the story holds enough to keep you engaged. There’s nothing particularly technical within the game and from a personal viewpoint, I think this is a perfect game for people seeking an introduction into its genre or is a game that would hold a lot of appeal to younger players. However, at the same time, this is also a title that holds enough content and depth to satisfy most other players too and with its ability to play co-operatively, produces the perfect game for families. So, if you’re in the hunt for a quest, then you’ll find plenty of them here.

If you’re in the hunt for a quest, then look no further than Quest Hunter with its accessible style and family-friendly mechanics.