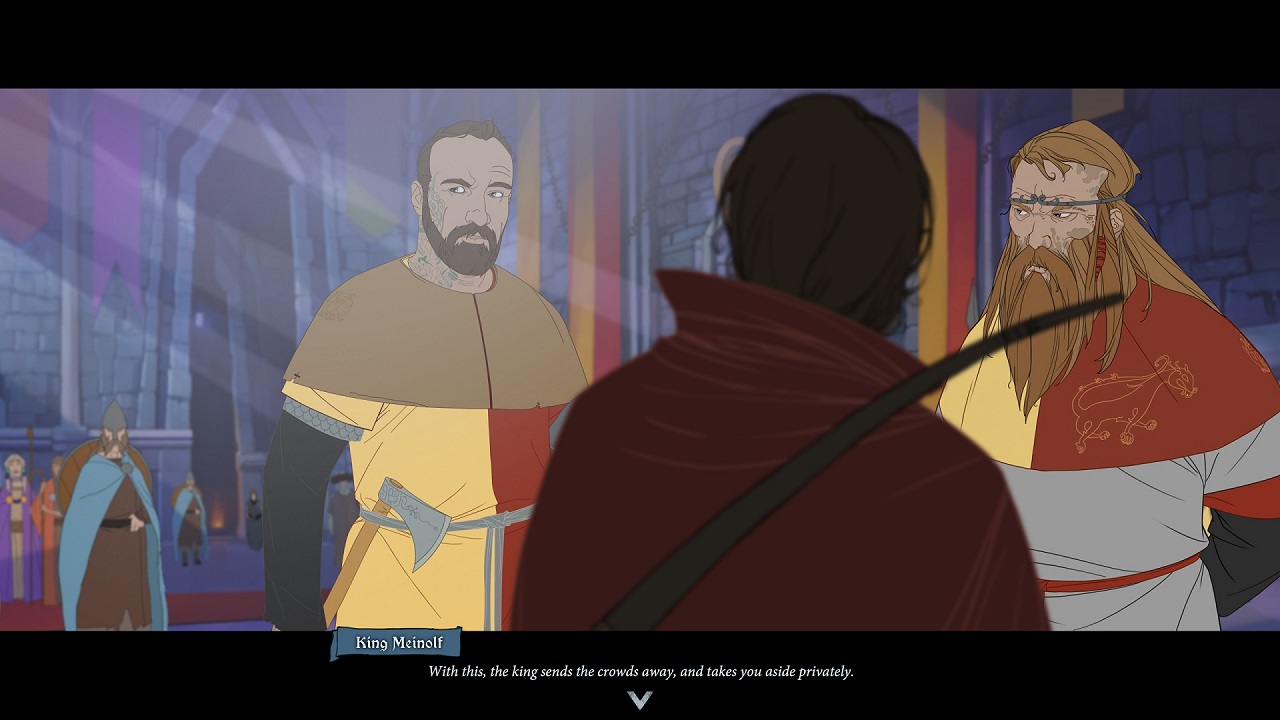 It’s been a long journey, not just for the Varl and humankind, but for us lucky gamers who have tagged along for the ride with the caravans of the Banner Saga. Well, our journey is now about to reach a thrilling climax, as Stoic’s The Banner Saga 3, gets its long-awaited release on the Nintendo Switch.

Published through Versus Evil, this third and final episode in the trilogy of tales, finally brings closure to the heroic deeds of characters such as Rook, Alette, Fasolt and Juno, as they make their final stand against the threats to their homeland since the sun stood still. With the looming onslaught of the ever-consuming darkness, as well as the threat of the mysterious worm-beast that tears up the landscape, both humankind and Varl, along with their old adversaries of the Dredge, face desperation as they prepare for a battle against time in order to save themselves, as well as the world around them.

Being the third of the trilogy, the events of this game carry on from where the second title ended. Although it can be played as a standalone title, it isn’t something that I would whole-heartedly recommend, as not only do the events of the first two games carry over through your save files, bringing a personal experience to the game, but you also miss out on the key events and themes that has led us to where we are now. If you truly want to experience the epic that is Banner Saga, you really do need to play through the first two chapters, before you invest yourself in this final outing. 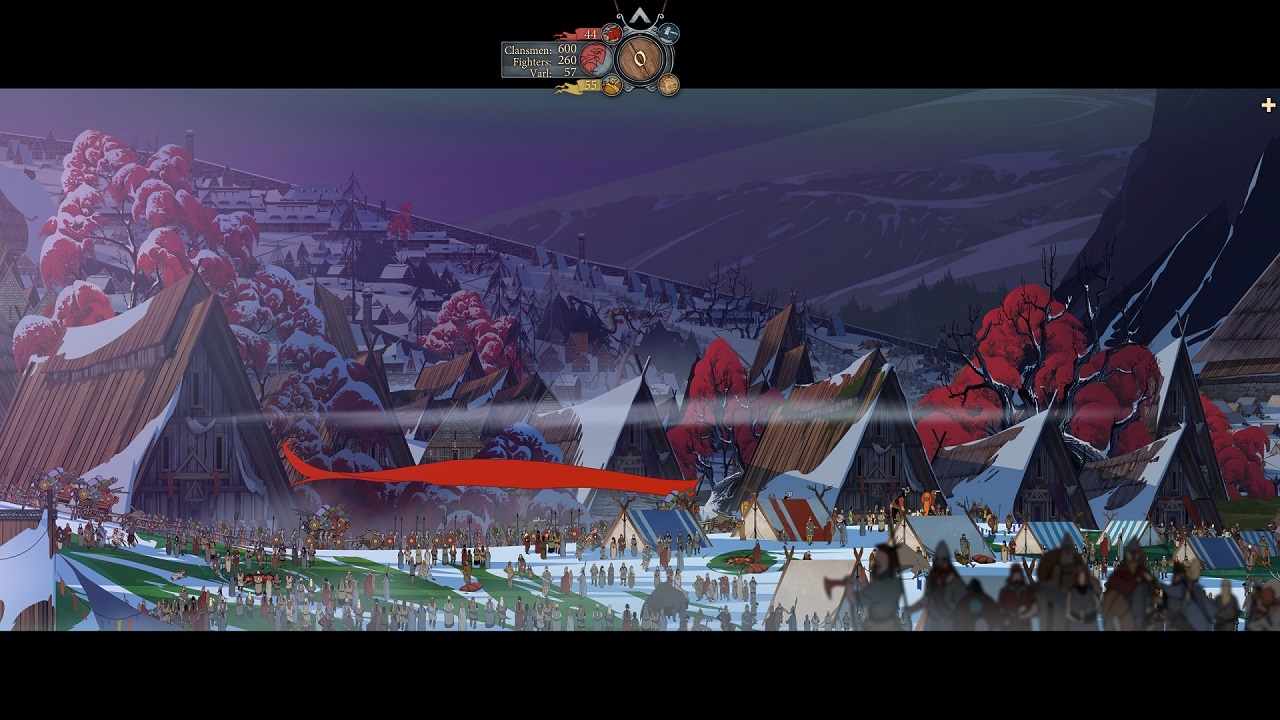 If you’ve already played the first two games in the series, then you’ll know that the second instalment brought a series of improvements over the first, even though it still contained the main core mechanics that made the first in the series so great. This time, Stoic have gone even further, pulling out all the stops to bring us even more characters, now boosted up to a roster of forty heroes, new enemies to fight, two related, yet separate storylines, as well a host of new features to the already sublime combat elements.

With two separate stories running at the same time, this time around, you have two travelling caravans to tend to. The first, who have reached the last bastion of Arberrang, the capital city of Rundwall, focus on bringing the races that are seeking sanctuary there closer together in order to bolster a last line of defence against the growing darkness that enshrouds them. The second focusses on a separate party that has ventured into the darkness, in the hope of stopping its advances and to find out what is responsible for the engulfing phenomenon. It creates an exciting premise as you battle on two fronts, with each decision you make bearing importance on the success, or failure, of either party.

Past decisions always bore an importance, as they made a direct contribution towards the stories within their following chapters. In this third of the series though, your decisions have a direct bearing on the end game through a series of branches that can lead to any number of climaxes. For instance, do you lose control of the stronghold at Arberrang, leaving the caravan within the darkness to travel alone? Or can you buy yourselves enough time to hold off the threat and allow the other party to stave off the advancing threat? Or do you simply fail on both fronts?Whatever your decisions, the end game will differ for each player, depending on your actions, not only from those made in this game, but from the previous iterations too.

Gameplay wise, Stoic have stuck rigidly with the same formula that we have all grown to love. Stunning cut-scenes and narrative all drive the story forward and the turn-based combat is still as strategic as ever. However, a few new inclusions have also been added, such as twisted new enemies that have become distorted within the darkness; offering more of a challenge than what we may have become used to in the past. The scenery too, within the dark veil, is twisted and distorted, making towns and villages that may have been visited in the past, barely recognisable. 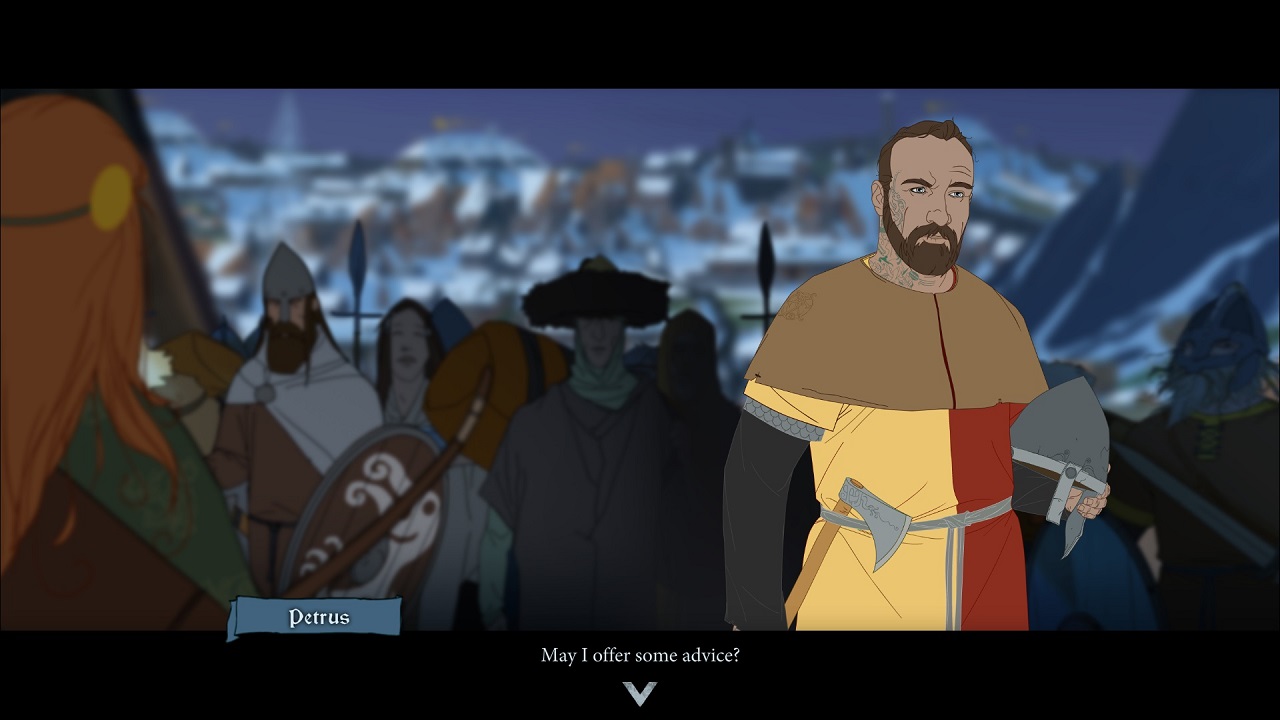 Menu options and controls seems to have been refined too, taking out some of the clunky mechanics of party management to produce a much smoother experience. The biggest change though, has to be the additions to the combat mechanics, especially when playing within the darkness, giving you more choices than ever before, as well as earning titles for your heroes that can offer buffs to other party members. Turn counters have now been included, bringing an urgency to the combat scenarios as you race against the clock. Should you eliminate the enemy before the counter reaches zero, you can flee the battlefield and continue along your path. However, if the counter reaches zero, then a new wave of enemies will attack, even mini-bosses, that can overwhelm your party. Survive the encounter though and special items can be dropped to bolster your party.

Willpower remains an important asset, but this is now further enhanced with the use of titles that can be awarded to your heroes. These in turn offer enhancements that produce a need to be strategic with your combat stance; position your heroes amongst your party and they will add buffs to these party members, such as extra attack options or more defensive stats. A lot of these can be character specific, especially with some of the new introductions within this game. Those of you who are familiar with Juno, will also be pleased to know that she has a more prominent role in this third outing; providing an effective source of combat on the battlefield, as well as an interesting mechanic that sees her entering into other dimensions to collect dark energy in order to revive herself should she meet a grisly demise.

These extra additions to the gameplay provide a good source of variety to an already tried-and-tested mechanic. Although familiarity still remains, its new features add an extra layer of depth and playability to the proceedings. Decision making feels more important as the claustrophobic setting of the stories produces an urgency around you, especially with the two parties of caravans working in unison to help each other. The maturity of its themes still remain strong, especially around the fates of the battle-weary and well-worn heroes that we’ve all grown an attachment too through the strengths and weaknesses of their harrowing journeys. It’s dark, it’s bleak and it’s seemingly hopeless, yet this third and final episode is also the most exciting, as you journey ever deeper into the climax of our heroes’ stories. Even though this is the most definitive version of the three titles, you’d be a fool not to play through the whole of the saga, as it sets you up perfectly for this enthralling journey to the end; a prospect made even more mouth-watering with a day-one patch that will further enhance the experience that I had with this review copy of the game, bringing extra features, mechanics and titles to an already sublime conclusion to an overall epic adventure.