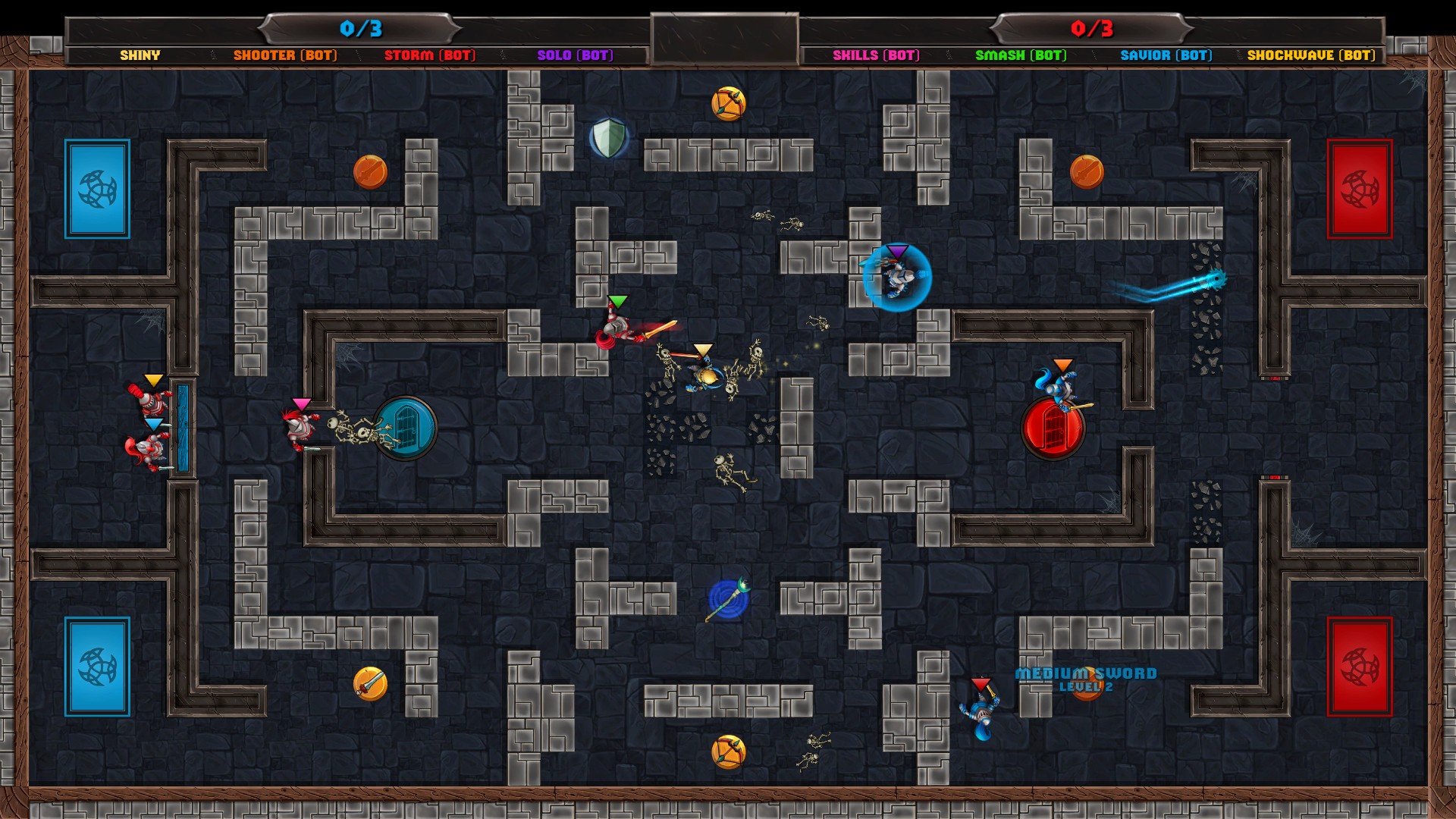 Knight Squad, despite its bounty of game modes and party-friendly arena combat, is an awfully lonely experience. It’s got all the parts to be a great Bomberman clone, but with limited online capabilities, you’ll spend most of your time in the company of bots.

But if you’re still developing cabin fever with your family, lockdown is the perfect time to experience Knight Squad’s ample content, most of which can be experienced with up to eight players. Game modes such as Team Deathmatch, Crystal Rush and Capture the Flag make for great Co-Op fun, but if you fancy showing off your skills solo, all the modes can be played alone either against bots or others. Each one can also be adjusted to whatever settings you like, such as choosing how many kills you need to get to win, or setting a time limit on a round.

Really, a big part of Knight Squad is its accessibility, and being so easy to play is perfect for inviting non-gamers into the mix. The game only uses the left thumbstick and any of the A/B/X/Y buttons to use your weapon, and it’s never more taxing than dodging hits and running towards your target. 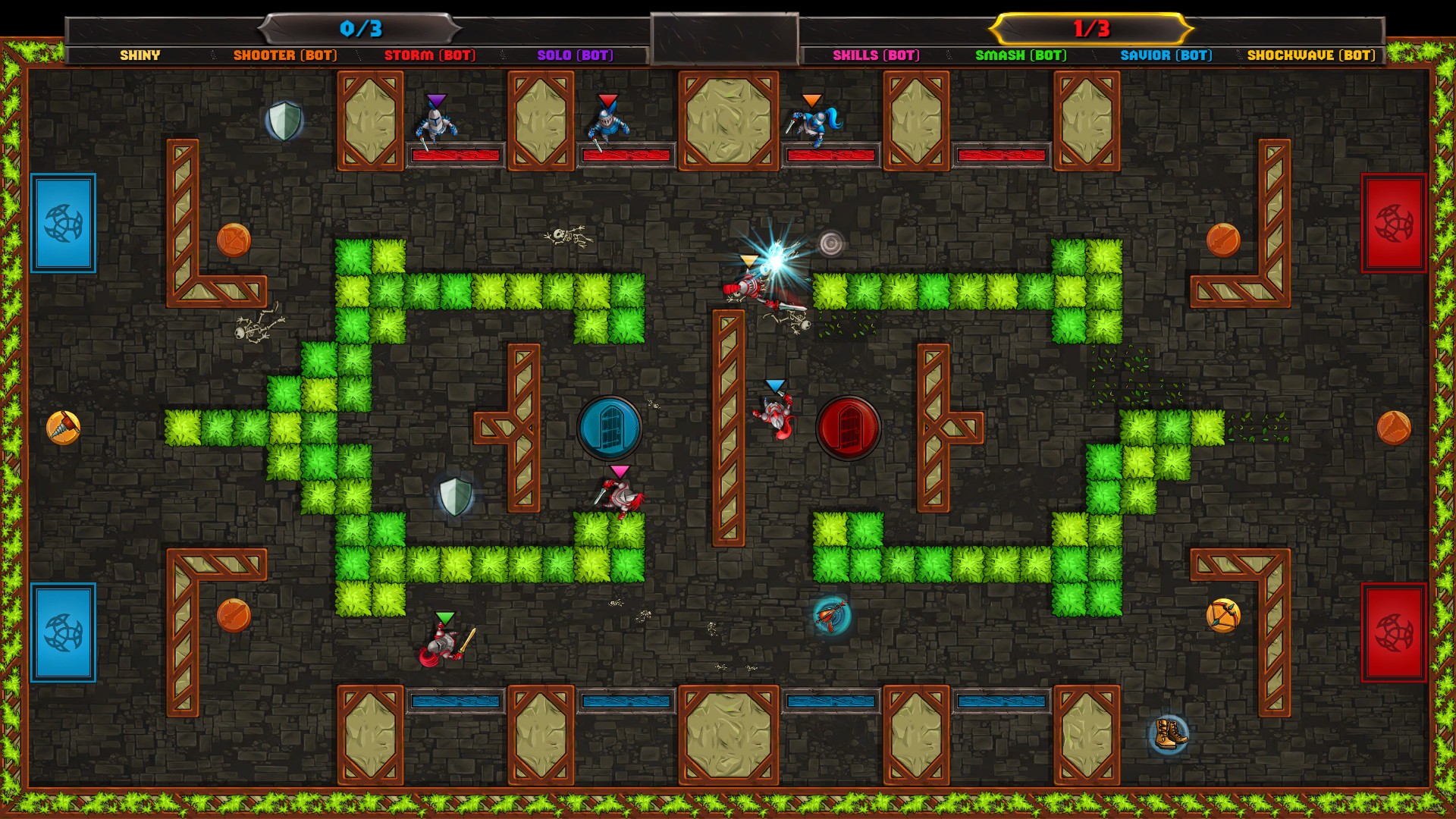 Each map boasts plenty of spawning weapons, and while some of these are entirely useless (distance weapons like arrows and crossbows are difficult to aim and too slow to be useful), most are great stupid fun. Watching your friends try and outrun you while you gallop towards them on the back of a horse is hilarious, and it’s these moments that make Knight Squad a great party game.

There’s plenty of weapons and upgrades, but unless you have shields equipped you’re always at risk of being killed with one shot. Granted, you respawn quickly, but some of the deaths feel cheap, especially when you’re flanked by persistent enemy bots that you can’t seem to escape. The same can be said when playing against others – if the enemy team feels like being particularly mean-spirited, they can easily surround your spawn point, forcing you into a cycle of constant death.

The latter is mostly an issue only in modes that rely on how many kills you can rack up, and more strategic modes tend to avoid such pitfalls. The latter tend to be the most fun parts of Knight Squad too, with modes like Jail Break and Crystal Rush being two of the most enjoyable. The former requires you to rescue dead allies from a cell to return them to the game, if the enemy team manages to take you all out before you can release them, it’s game over. In Crystal Rush, you defend a set of crystals from enemy attacks while trying to take your enemies crystals out first, using the otherwise useless drill weapon. Just like all the modes in Knight Squad, they’re both bonkers, chaotic fun that are better with friends.

If you’re flying solo and don’t fancy playing with a bunch of bots, there’s a fun challenge mode, pitting you against a series of boss battles that are totally unique to the rest of the modes. They still fall victim to the same problems as the rest of the game, most notably enemies are much faster than you, so one false step and it’s game over, but they’re all a great challenge, even if there’s only a handful.

Completing these as quickly as possible puts you into an online leaderboard, so you can compete with the rest of the world to be the best giant worm slayer, or see if you can last the longest in an endless mode. It’s a shame, however, that this is the only online functionality – there’s no way of joining up with a party online and taking on any of the games modes with strangers, so if you don’t have a houseful of willing combatants, Knight Squad can run it’s course quickly. 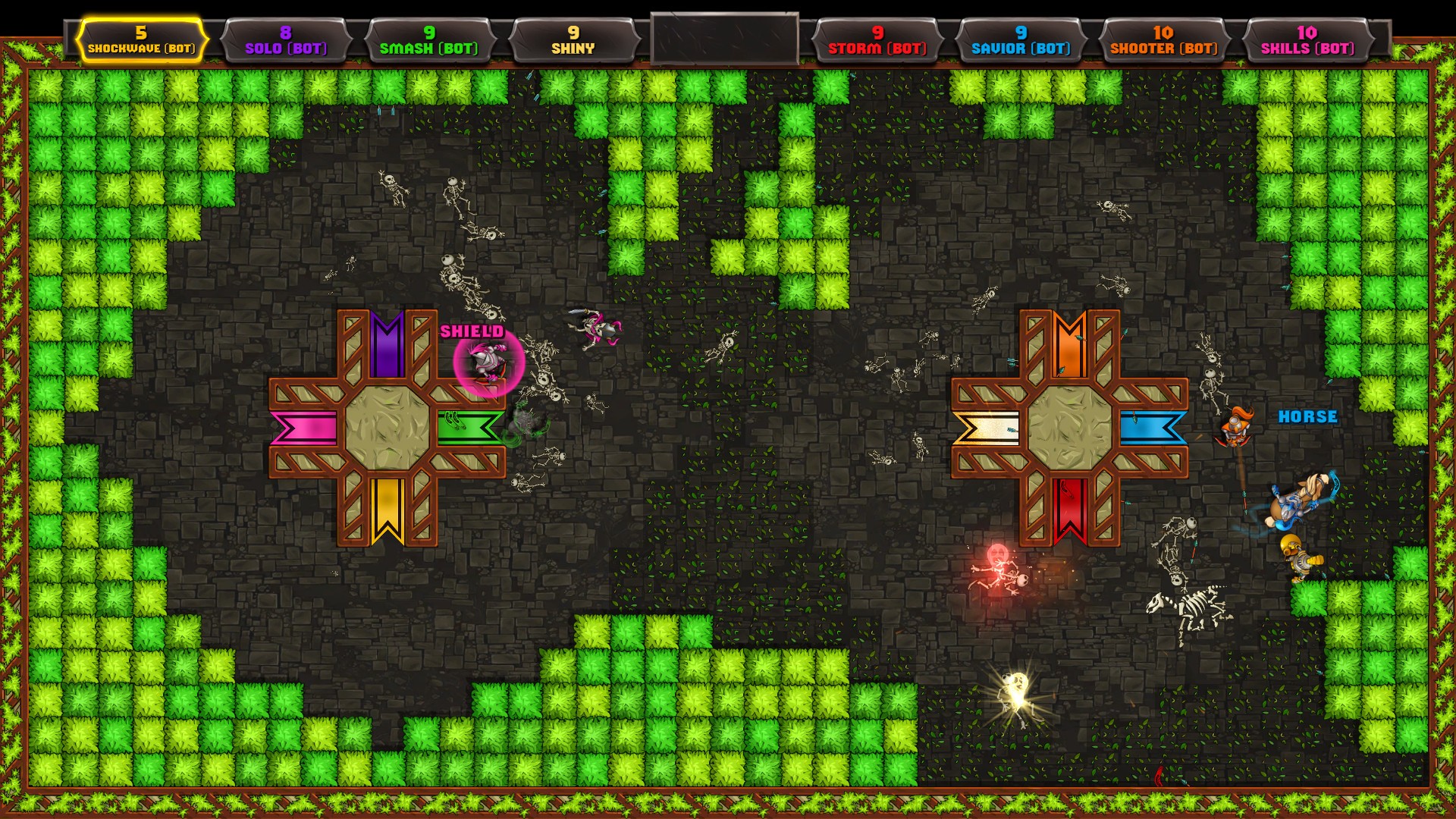 It’s not to say you won’t enjoy some of the games modes solo, playing Soccer (quite literally just soccer with knights…and swords) can be fun for a round or two, but for the most part, you won’t rush to choose these modes over others.

The top-down, 2D Bomberman-style arenas are charming, as are the great selection of Knights to choose from. There’s clearly a great deal of love gone into making each one unique, and whether you pick any of the Knights from the base game or one of the three unlocked via the DLC, you’ll always be treated to a well-designed hero to play as. That being said, as soon as you enter the arenas, the characters are so small you can barely notice the unique design your hero possesses. It’s more of an issue for the Switch than the game itself, as playing on a handheld is clearly more troublesome than docked.

Some of the best content in Knight Squad is reserved for the Extra Chivalrous DLC and for the money you can’t go wrong. With three new heroes and four modes, there’s ample content, and considering it contains some of the best modes (including the previously mentioned Jail Break), it’s definitely worth investing in.

Knight Squad is a great party game if you have plenty of friends to play with, and even if you don’t, it’s still better than any modern-day Bomberman title. It might run its course quickly, but with others, it’s great fun, at least for a little while.

Knight Squad is at its best when you have a house full of friends, and even if you don’t, you could do much worse if you’re looking for a Bomberman Clone.