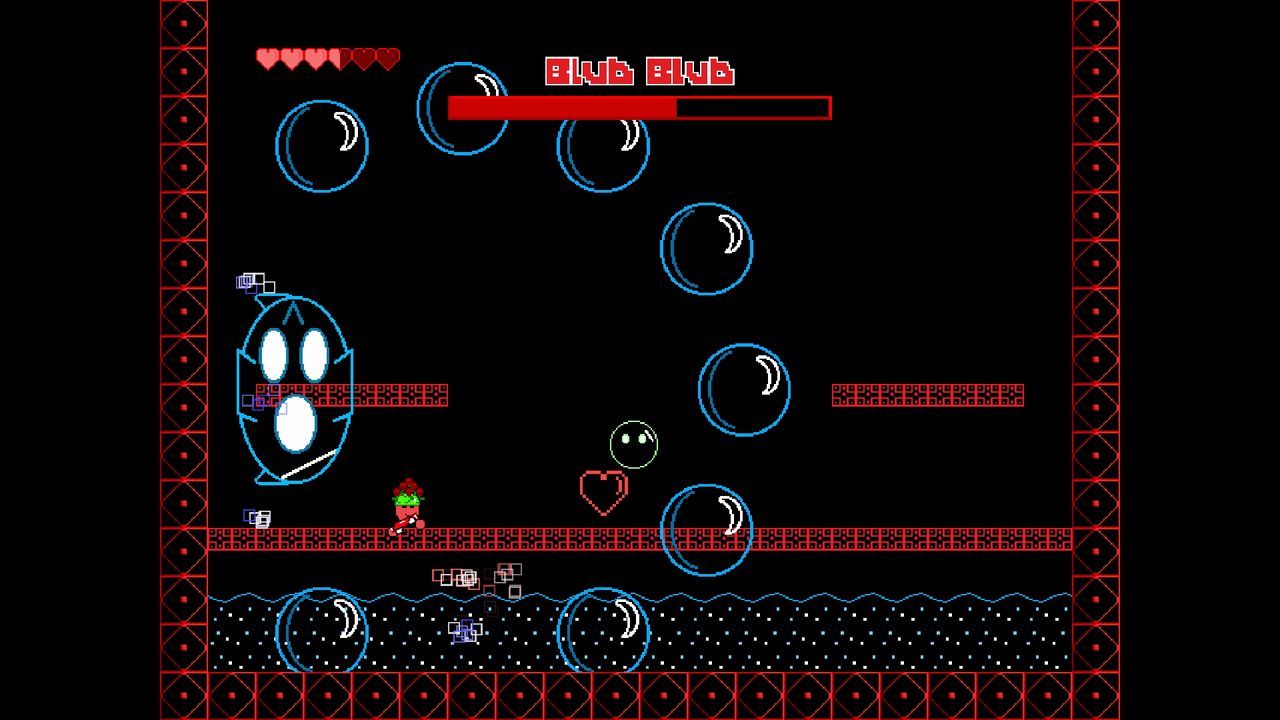 Many Faces is an arcade-style shooter that comes to us from Wanzungdev by way of EastAsiaSoft, who is doing a pretty good job of bringing over various indie devs from outside the norm to the Switch forefront. The objective of Many Faces, in both presentation and mission statement, is to recapture the ideology and sensation of playing a game that was created back in the 90s. Retro-inspired development takes on many forms (ironically), and Many Faces seems to try and capture almost every aspect in a singular package. The attempts come in several attack points: graphics, sound, execution and enjoyability.

The biggest set of points for Many Faces comes from the concept and design. It’s simple: you’re a dude who was trying to sleep on a hill, and aliens came and abducted you, and you need to defeat them so you can get back to sleep. You need to shoot through several stages of enemies (including a few bosses) to ultimately beat the ship and get back to your beloved resting hill. That’s seriously it, which is appropriate for an arcade game. There’s no reason to get bogged down in storyline for something that’s meant to be played in small chunks to completion in the same amount of time it’d take to watch an episode of Bob’s Burgers. Thankfully, to help offset the shortness of the game, there are multiple difficulty levels which can be felt in level layout, enemy type and the frequency of heal drops.

Many Faces gets its name from both the main boss that you face at the end and the underlying theme throughout the entirety of the game. The player, who does little but run, jump and shoot, is able to adapt and adjust to the game through the hats that are dropped at the end of each stage. You can only wear one hat at a time, and each hat bestows a different ability on the player. Some of them are silly and superficial, like creating a cloud of damaging music notes every time you jump down from a high platform. Some are pretty freaking cool, like the Ultimate Weapon hat that cuts you down to a single heart for health in exchange for a rapid fire blaster. The key to the hats is to identify the ones that work best for you on sight and make a rapid fire decision before the beam of light moves you to the next level. Also, be careful about dodge rolling: it might save your life, but it knocks off your hat, and you gotta be wearing it for the passive effects to work. Also also, simply walking over the hat puts it on, so you need to be aware so that you don’t accidentally pick up some truly worthless chapeaus. It’s trial and error to figure out which each hat does, so be prepared to make some bad decisions. 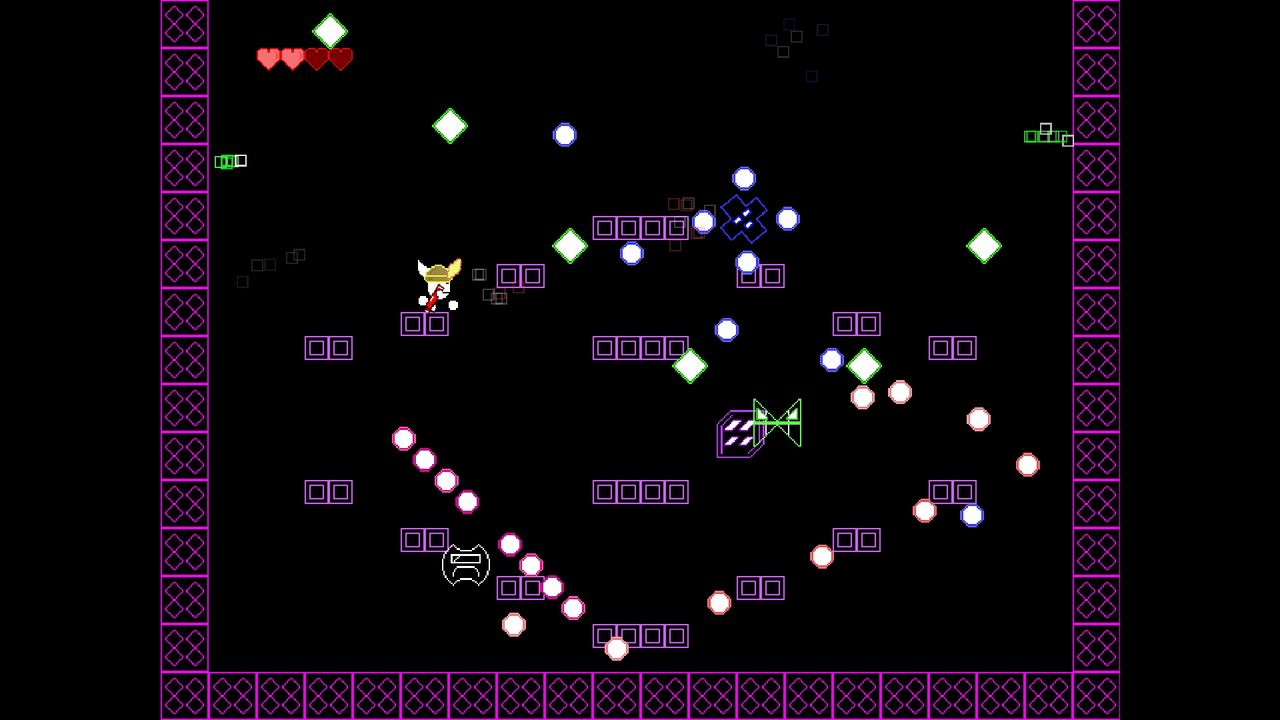 The enemy variety in Many Faces is shockingly diverse, and it’s probably the coolest point of the whole game. Something like Many Faces, that uses very a simple, angular art styling could have ended up with very same-same enemies throughout. Instead, there’s this whole stable of differently colored, shaped and formatted foes that bring totally different bullet patterns with each. You’ve got your homing shot enemies, some pinwheel spinning enemies, some enemies that create bullets frozen in time, some dudes who shoot down ground piercing shots like lances, and even more. One of my favorites are the foes who seem to zip around in the air, leaving Tron light bike trails behind them that are dangerous to step into. This tells me our protagonist was either abducted by an interstellar zoo, or by a spaceship that has gathered different representatives from all the far reaches of alien life, and every single inhabitant straight up hates you. It’s borderline inspiring, and it’ll keep you on your toes.

With the game being fairly short, it was important to play Many Faces on different difficulty levels to see how the experience stacked up from case to case. Easy Mode is truly quite easy, and should be used as a gateway to the normal and hard experience as it better gives you expectations versus that of the tutorial. The tutorial gives you a very flat, easy-to-navigate room with just some static targets to shoot and a hat that does nothing. The easy mode shows you how each level has wildly different layouts, complete with collapsing floors and seemingly arbitrary walls,  and that your bullets by and large won’t pass through most platforms, forcing you to leap all over the place in order to make the shot. Enemies aren’t pulling their punches, but also some of the more fearsome mobs don’t show up on easy mode. Additionally, heart drops are plentiful: most hits from enemies drop you by half a heart (you start with the standard three), so full heart drops constantly keep you in the black. Easy mode also lets you get used to the shoulder button approach, allowing you to get comfortable with the shooting, jumping and occasionally rolling, though, arguably, I almost never had to roll in easy mode. 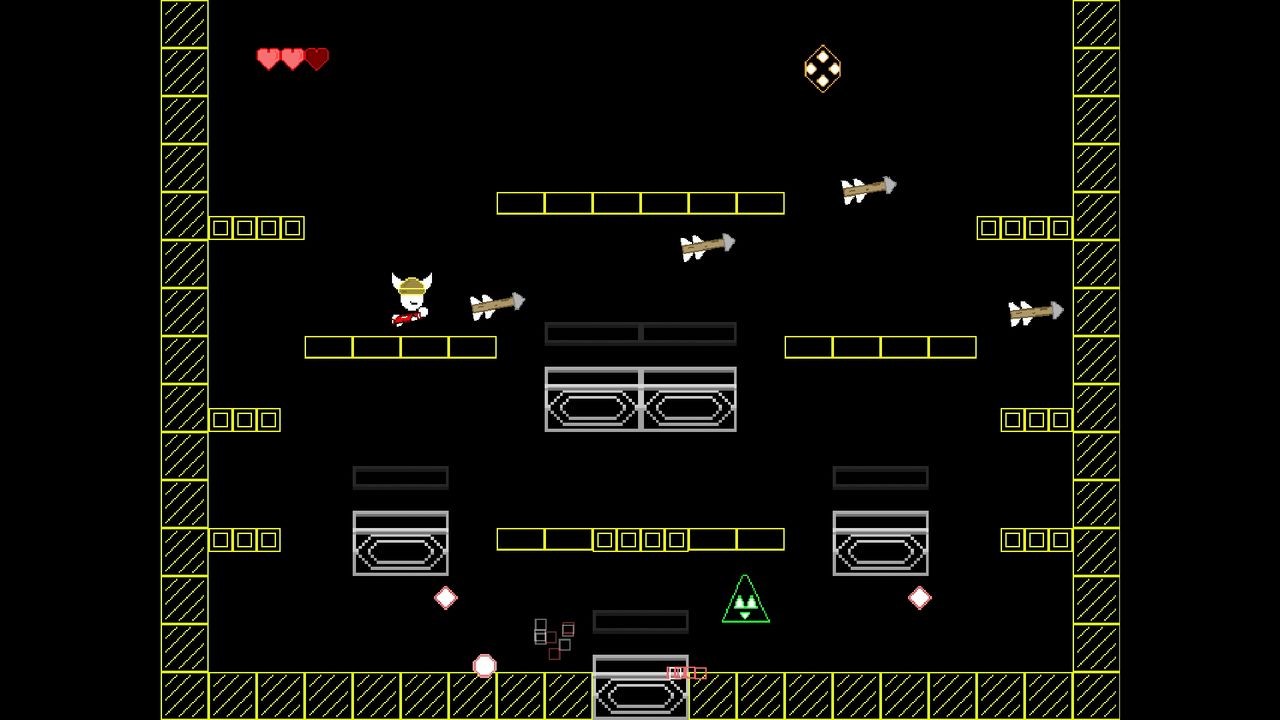 Normal mode for Many Faces feels like where the game should be, in terms of engagement and challenge. Here, at normal, you get to see a higher density and more waves of enemies, as well as a better balance in heart drops. You start to feel the pinch of the random generation more here, especially with the hats. Hard mode is certainly challenging, with far too many reasons to need to dodge roll and treat the game more like a bullet hell platformer than a standard action arcade experience. All three of the difficulties can be played from the very beginning (once you clear the tutorial) so feel free to weigh in and get your own feel of the game in all flavors.

The biggest difficulty I have with Many Faces is how it strikes me once all is said and done. With arcade games, the appeal of the arcade is a clear and easy-to-understand benchmark. You get in, you play it a bit, you accept the loss of your quarter and you move on. This was obvious and easy in a smoky room with plenty of neon cabinets and a cacophony of sounds. Arcade games that come to the Switch and other consoles, however, need to have an addicting hook to them to justify the price that is far higher than 25 cents, and also removes some of the atmospheric elements I just mentioned. Many Faces is a good game, don’t get me wrong, and there’s plenty to enjoy about it in a small dose. But, looking at my collection of Switch games, do I think I’ll come back and play it again during a downtime moment? I highly doubt it. Do I think that four bucks is about how many quarters I might have dropped to play this? It’s possible.

Many Faces has polish, poise and proper execution, and the developer should be proud of their product. And, for the arcade enthusiast out there, this could be the great addiction you want and crave to blast through a lazy Sunday or this particular leg of in-house restriction.

A fun but fast arcade shooter, Many Faces has many reasons to enjoy the chaos and the execution, though that well can dry up surprisingly fast.