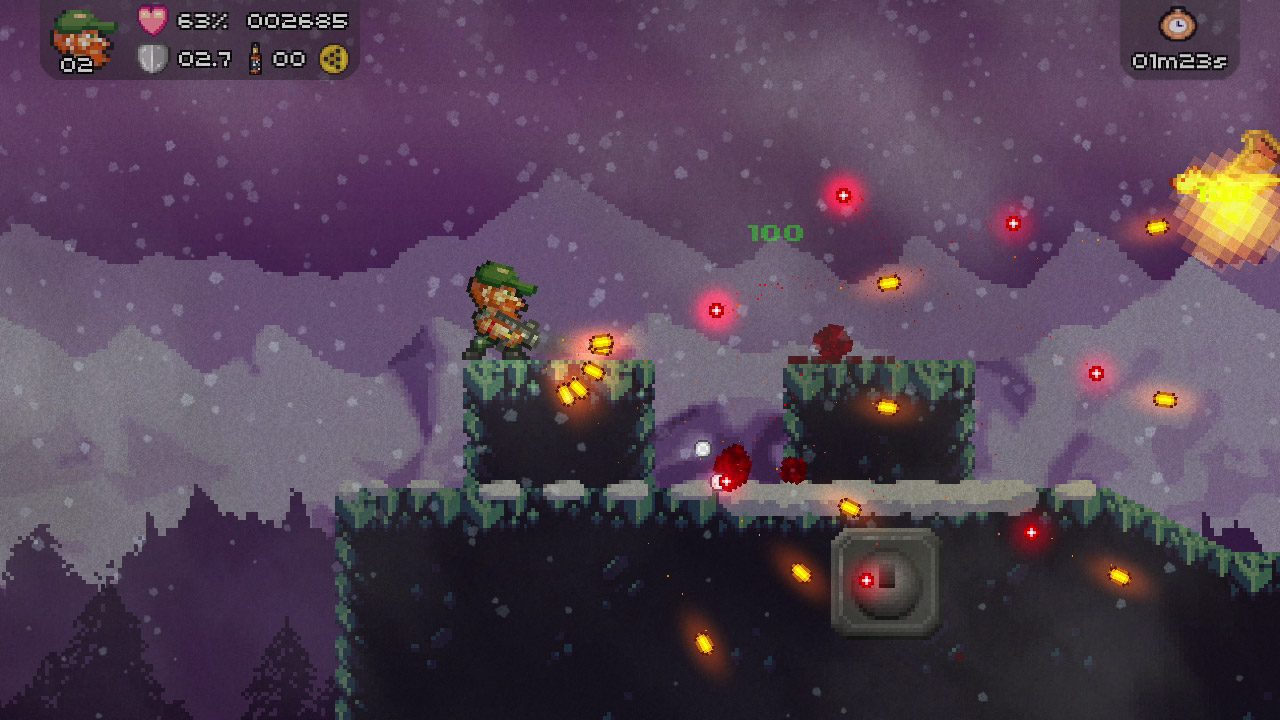 Action movies know what the audience wants. Sure, not all of them are going to engage fans with an in-depth story that questions your existence, but it will entertain you. Operation Hardcore pays homage to the genre of action films and is complemented by its old school side scrolling game play.

An alien invasion is already underway. Instead of cowering in fear like everyone else, you decide to take matters into your own hands. It’s past time for negotiations and you begin your negotiations with the aliens in the form of explosives, machine guns, and other instruments of destruction.

The game play is a traditional side scrolling shoot-em-up. You pick one of four heroes, each with different personalities and backgrounds. You get the pirate-like guy of Road Rash, ex-military specialist, Ammo, cowboy Mickie Lee, or the Mr. T homage, T.A. Fracas. From my initial play through, there wasn’t a huge difference in the variety of characters other than their appearance and their backstories. 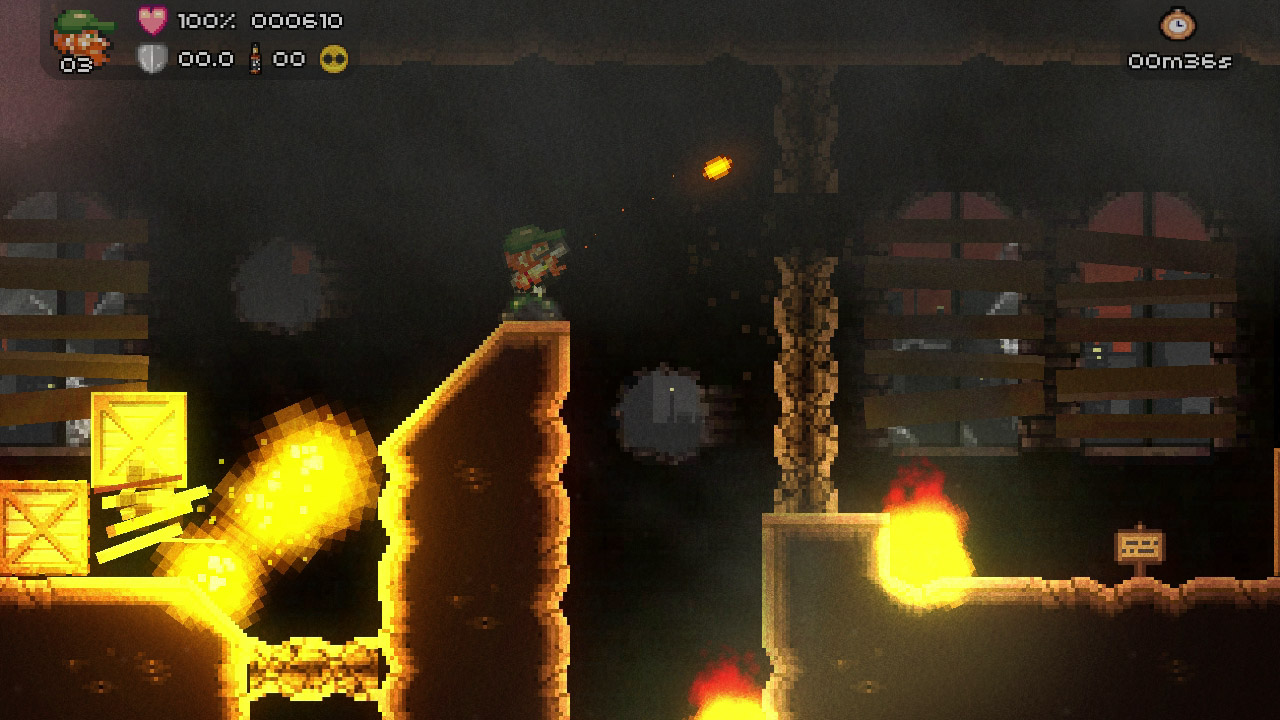 In addition to the basic shoot-em-up game play of controlling where you aim and point at what to shoot, you are also given an option to brace yourself to focus your shots. This feature amused me as it allowed me to focus on specific angles I needed to hit aliens at a lower elevation or awkward angle. Another interesting thing that ties into the gameplay is the powerup system. As you destroy invading aliens in your path, you are rewarded red chunks, which are health and coins. With those coins, you’re able to purchase different upgrades in a store area, but unfortunately when you die you lose all your power ups, but keep your money. The powerups range from a flamethrower, machine gun, explosives, and a charging laser gun. Personally, I enjoyed the laser gun although it required a small charge time, but the damage dealt to enemies was worth it.

There are three modes in Operation Hardcore. The first mode is Adventure. You fight your standard bad aliens, then you eventually run into the boss for the level. The next mode is competitive. This is an adversarial mode where you and one other player compete to see who can take down the most enemies. At the time of this review, I wasn’t able to fully test out this mode due to lack of extra players, but firing upon your competitor is open. The last mode Operation Hardcore includes is challenge mode. There are different scenarios you can pick from, but the goal is to finish them in the fastest time possible. They range anywhere from acquiring specific items, fighting X amount of enemies, or trying to get to a goal in X amount of time. As an added bonus, there are later stages in the game where you are given the traditional non-stop scrolling stage with a jet pack.

The graphics and sound design of the game are the nostalgic throwback of 16 bit gaming most of us grew up to know and love. I give major props to the designers of this game for the little details, such as detailing out the damage of the destroyed buildings or even the gruesome corpses on the floor as a result of UFOs attacking everything in sight. Things like this propel Operation Hardcore to stand above mediocrity when developers are trying to innovate the genre of side scrolling shoot-em-ups. Another neat thing the game adds is humor. As I was going through the first level, I ran past a sarcastic sign with a message from the aliens threatening me to the extent of, “You’re going down-The Aliens”. 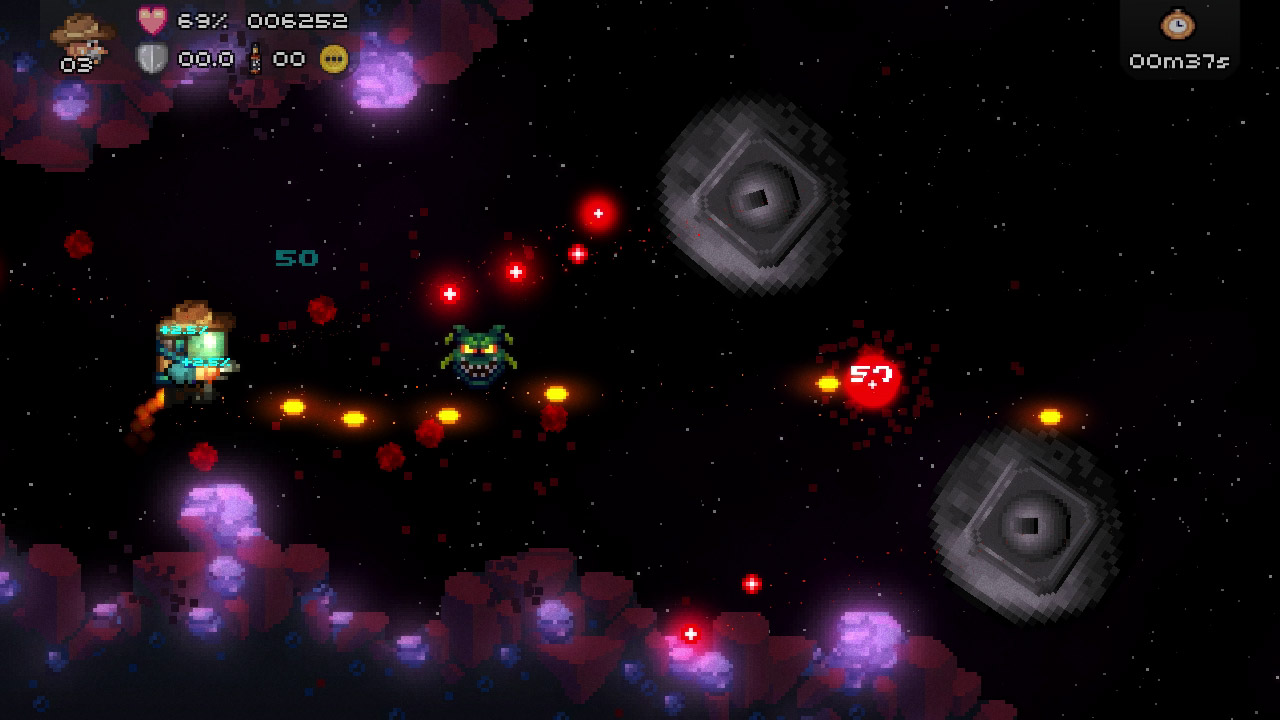 Operation Hardcore was a solid game, but it did have a couple of problems. The first issue I had with the game was the loading time of the areas. The animations and vibrant backgrounds chugged momentarily, but this was probably due to generating so many factors in the stage. Without factoring what specs I have on my laptop, I recommend this can be remedied by just waiting a couple of seconds to let everything settle in, then continue playing the game. The other thing that holds back this game is the variety in each character. I love how they each have their own backstories and personalities, but I would hope if the developer planned a sequel in the future, perhaps they could each have special abilities that suit their personalities or with their preferred weapon of choice.

Overall, Operation Hardcore is fun. The story line doesn’t bring anything new to the table, but it is a great way to kill a couple of hours on a lazy weekend. I’d recommend this game if you’re up for an old school side scroller that doesn’t take itself too seriously. As of now, this game is priced at 5.99 USD, but if you truly want to wait, holiday sales are common, so add it to your wish list.