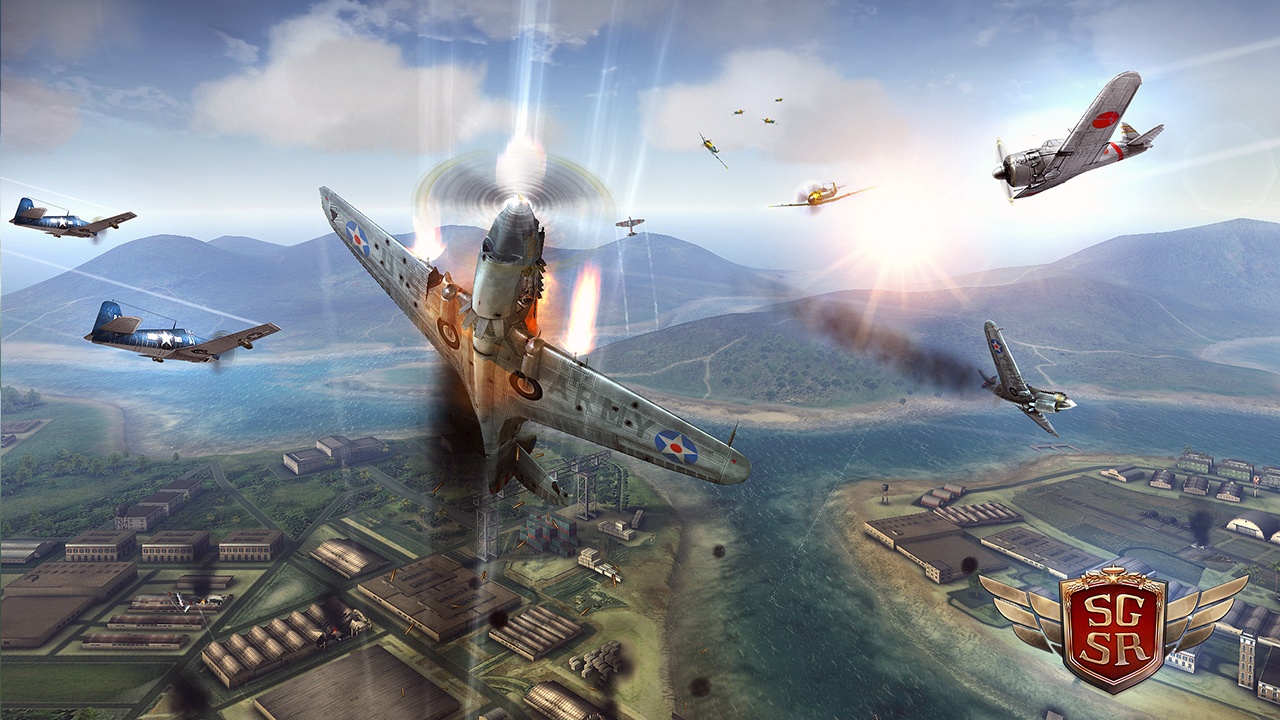 With the Nintendo Switch just being over a year old now, as well as its dedication to providing a platform for independent game developers, it’s library is now suitably varied with a number of genres to suit all tastes. Whatever style of game you’re looking for, you’ll find it here; especially with a personal favourite of mine, air combat simulators. The latest offering to fly into the Switch’s airspace, comes in the form of Atypical Games’ mobile port, Sky Gamblers: Storm Raiders, out now on the Nintendo eStore.

This arcade/simulator focuses on the era of the Second World War, containing a myriad of options, particularly when it comes to control schemes, personalisation and gameplay, as well as a whole host of iconic aircraft from a variety of nationalities. It also contains a stunning level of detail, from the white cliffs of Dover to the American naval base at Pearl Harbor, as well as progressive damage to aircraft, weather effects and lighting blooms. All of its elements combine to produce a game that not only looks aesthetically pleasing, but also contains a level of depth that is easy to nose-dive into.

It’s single-player offerings consist of three campaigns: The Asia-Pacific War, Battle of Britain and Burning Skies. Each one contains a variety of scenarios, from the attack on Pearl Harbor to the defence of Dover, as well as presenting you with a flying perspective from all sides within each respective conflict. There’s also a wide variety of mission objectives too, from simple dogfighting to bombing runs and torpedo strikes to escort and protection; they even change on the fly, requiring to perform all manner of tasks within the mission parameters. Each of the battles here are particularly enthralling, with skies full to the brim of enemy and friendly fighters, seas packed with ships and faithfully recreated landscapes. 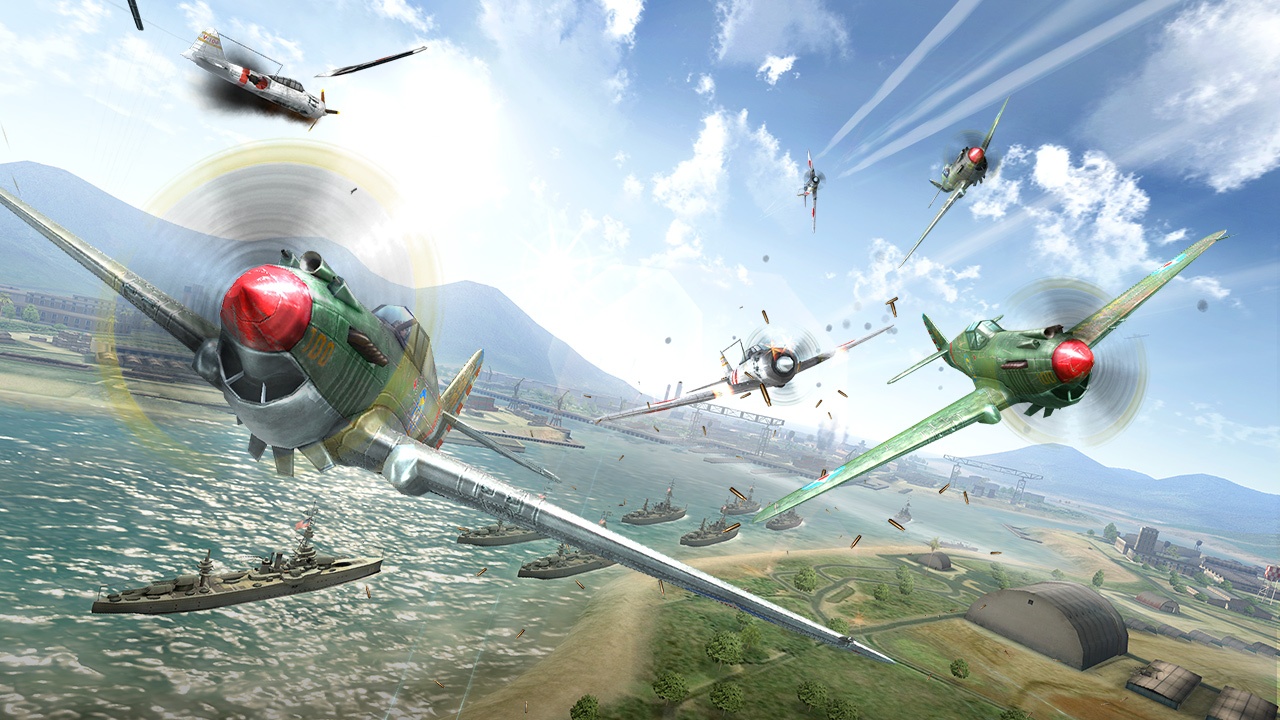 As well as a series of campaigns, the game also offers a variety of gameplay options, with skirmishes that revolve around Team Deathmatches, Free-For-Alls, Capture the Flags, Base Defence, Dogfight Missions, Survival, Last Man Standing and Free Flight. These can all be played against a suitably threatening enemy AI over a variety of scenarios and landscapes. You can even personalise your aircraft from an impressive roster that ranges from propellor-driven aeroplanes to the early forms of jet fighters.

As well as the ability to play these variety of game modes solo, you can also take them online in a series of aerial battles against human opponents. However, at the time of writing this review, I was unable to find any occupied lobbies, so I can’t comment on the playability or functionality of this element of the game. Saying that though, the AI skirmishes were satisfyingly addictive in their gameplay qualities and I can only assume that its online component will be just as thrilling, if not more so. Despite the game lobbies being empty, which is most likely due to my playing this game before its release date, the array of game styles and options available to you, both in solo and multiplayer terms, is simply staggering.

Flight controls are incredibly smooth with a nice tightness to the responsiveness of your inputs. The game also incorporates a nice level of customisation and options here too, with simulator and arcade styles, conventional control or accelerometer driven mechanics, difficulty levels and an auto-aim function. However way you want to play, from a simplistic arcade experience to a bullet-hell simulation, you can set-up the game to produce a tailor-made experience for your particular style. There are even a variety of camera angles that range from varying degrees of external views to the interior of the cockpit; However, one thing that I did notice is that all the cockpit models are the same, whatever aircraft you may be flying. 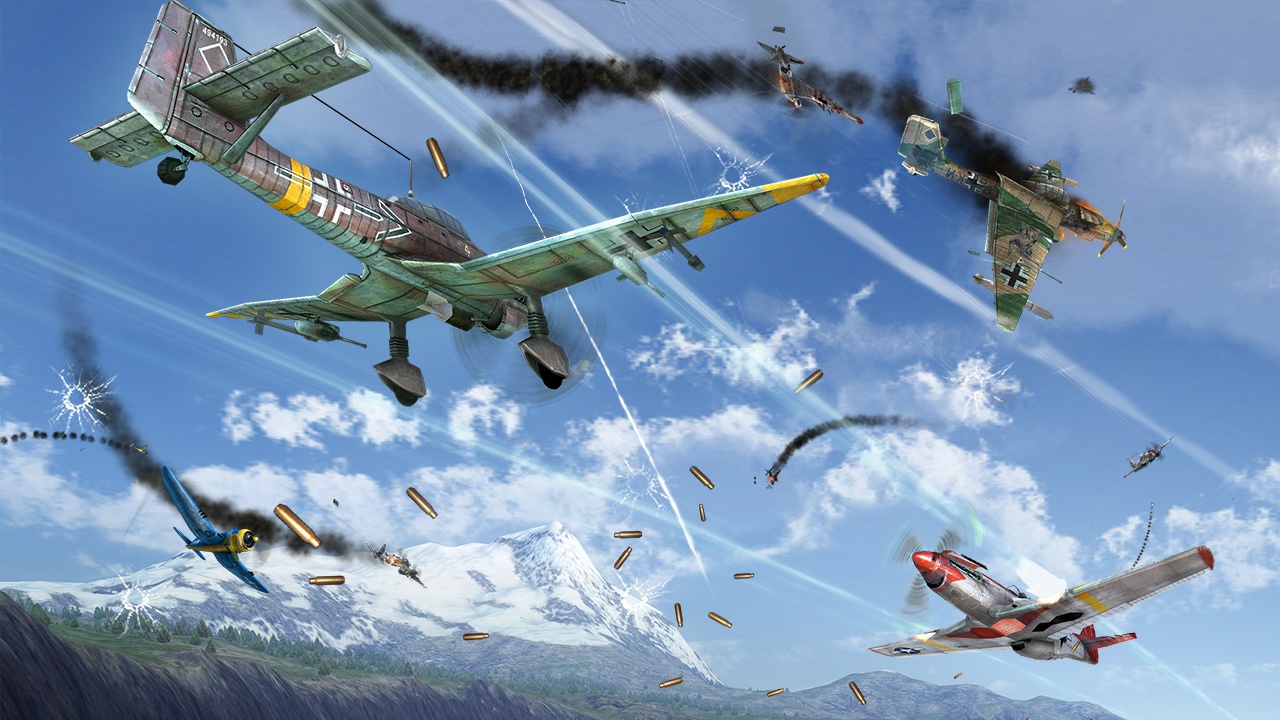 As well as boasting a whole range of options and game modes, Sky Gamblers: Storm Raiders also contains an impressive level of detail; both in aircraft modelling and landscapes. It’s roster of aircraft contains all manner of flying classes, from fighters to bombers and jet aircraft to some legendary and ace varieties. They each contain a nice level of detail, as well as varying paint jobs and customisable features. However, I did feel that some models were more accurate than others, but saying that, each one is suitably distinguishable and instantly recognisable with models such as the Spitfire, Mosquito, Ju87 Stuka, BF 109, A6M Zero and P51 Mustang; and that’s only a small percentage of the aircraft on offer here.

Scenery is also highly detailed, with instantly recognisable landmarks such as Pearl Harbor and the cliffs of Dover. From altitude, the fields of England, mountains of Ardennes or oceans of the Pacific flyby with a realistic aesthetic. However, they do lose some their impact at low-level; although flying over tree-tops and in-between buildings, even though train tunnels, is as equally as satisfying as the birds-eye views of the passing landscapes. Damage modelling is equally as impressive too, with debris flapping from wings and fuselages, as well as smoking fires and bullet-ridden cockpits. Despite its level of detail, flight mechanics and options, there are one or two elements of the gameplay that do falter here. There’s nothing game-breaking, but the simplistic landing mechanics, shallow-watered shadows and non-destructiveness to some buildings do pull you somewhat from the level of immersion that the game presents.

Overall though, Sky Gamblers: Storm Raiders presents a thoroughly engaging experience in the genre of flight combat games. The smoothness and tightness of its flying mechanics produce a deeply satisfying element of dogfighting, strafing and bomb running. With so many options to playability and an abundance of game modes, both in a solo and multiplayer capacity, produces a level of depth that guarantees you absolutely hours of flying-time. Although not perfect, its level of detail contains enough to produce a realistic and aesthetically pleasing environment; especially in its gradual depiction of battle damage and rolling landscapes. If you’re a fan of flight combat games, or even aircraft from the era of the Second World War, then this is a game that will satisfy you immensely. Despite a couple of shortcomings, Storm Raiders represents not only great value of money with its wealth of options, but also a deeply engaging experience with various depictions of aerial combat within a world at war.