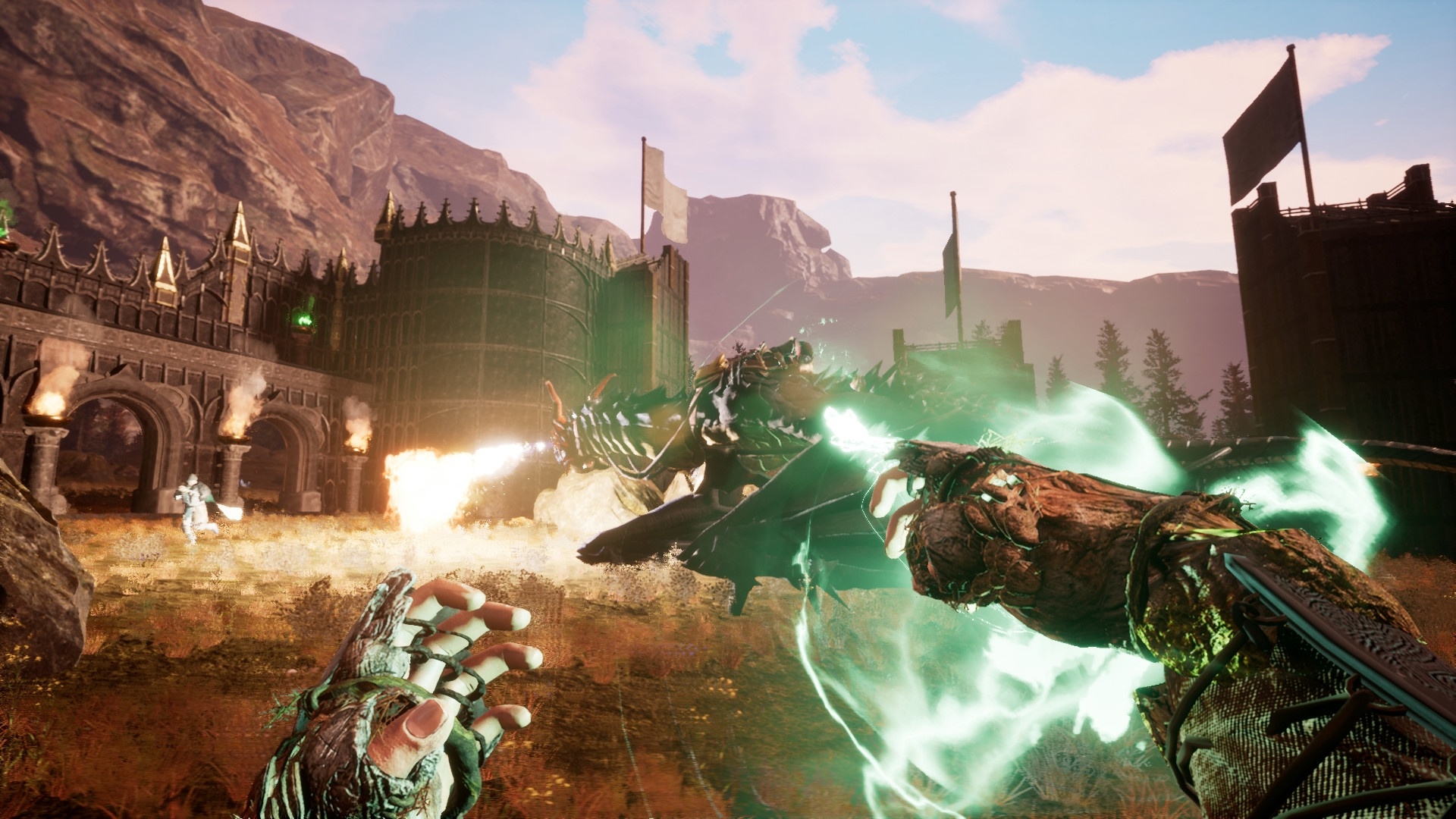 Citadel: Forged With Fire is a bubbling cauldron of potential – mixing elements of successful online survival titles such as Rust and Ark, with the wonderful wizarding world of Harry Potter. Confundussed yet? Citadel: Forged With Fire is essentially your chance to enter into an online world permeated with magic and odd, square-looking player created structures all over the place. It’s fun, but as with all online survival games, it has its drawbacks…

First up, I wanted to talk about graphics. If you read Steam reviews, you’d be forgiven for thinking that the game looks like a potato. This is clearly not the case upon entering the colourful world that Citadel has to offer. Using the Unreal 4 engine, Blue Isle Studios and Virtual Basement LLC have created an atmosphere that begs to be explored – with crisp textures, amazing lighting and incredible particle effects. It’s a wannabe wizard’s dream as spells are not only brought to life, but given a whole new life of their own. Yes, there are some clipping errors, trees that look like toothpicks in the distance and the odd piece of terrain that wasn’t thought out properly, but Citadel: Forged With Fire looks amazing on the whole.

In terms of music, Citadel offers up a soundtrack that is epic and befitting of an open-world fantasy survival – with dramatic conflict music and accents that make your exploration of the world feel cinematic at the least. Spell sounds and ambient forest noises are immersive, creating a truly magical atmosphere for the player. 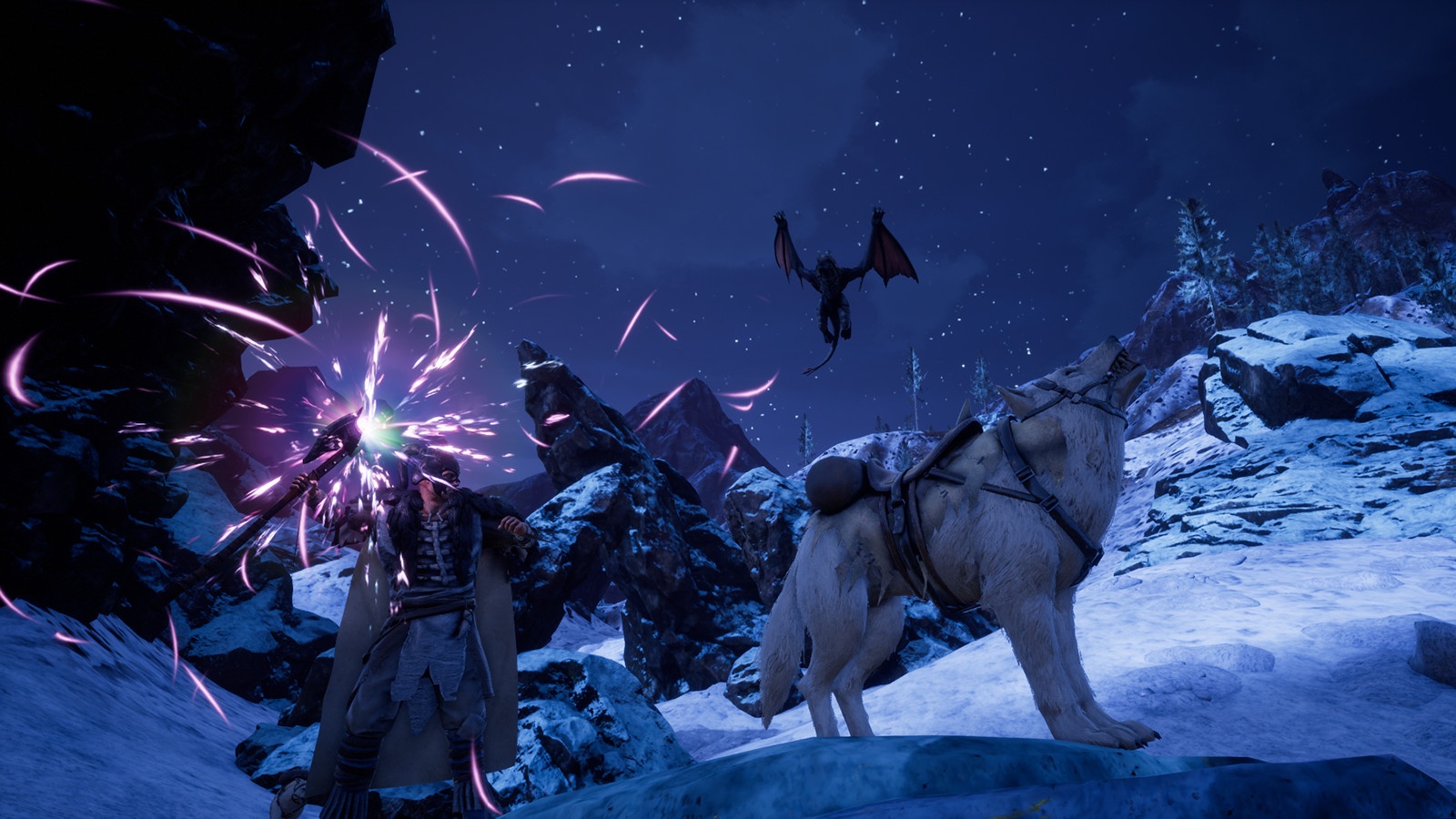 The one element of Citadel: Forged With Fire that shocked me, was the fact that for an online, open-world survival game, the gameplay was actually fun and incredibly polished. The combat system is simple and allows for a large combination of items and spells – meaning PVP and PVE combat is easy to get into, fun to master and rewarding when you use your brain a little. Additions such as the flight mechanics work extremely well, with players being able to fly a broomstick like a crazy old hag, or tame a wild beast with wings to zoom around on. You can even join the “Broomstick league” which is essentially Quidditch online – now that’s gotta be worth the purchase right?

One thing I really didn’t enjoy about the game was the tutorial. There was a lot of reading text and unfortunately not a single drop of voice acting in place. Quests in Citadel: Forged With Fire are given by fairly lifeless NPCs and tend to revolve around fetching materials in exchange for a reward of some kind. In the case of the tutorial you have to venture outside of the safe zone (an awesome force-fielded area around a castle) in order to collect said materials. This is all well and good until you have to build a campfire. Because Citadels uses a kind of ‘claim’ system to ensure players have an area in the world to call their own, you had to venture pretty far to place your campfire outside of the spawn – due to an abundance of abandoned ash piles. Even more annoying was that I was sent back to the campfire a further 2 times in order to complete the tutorial, all the while trying to dodge annoying players who wanted to PVP me at every opportunity.

So the main thing we’re all here for is the spellcrafting right? It’s a really cool and simple system that lets players tinker with various elements such as dark, light etc – to craft their own spells. Different items will be able to hold different spells, so it would be useful to have a wand, staff and maybe even an enchanted axe. As I said earlier, the spells in the game look and sound fantastic, but they also play very well too. Low-level arcane spells fly quite randomly from the tip of your wand until you can master the better spells and make more reliable equipment – think of Ron Weasley’s somewhat tatty wand. This all adds to the charm of the magic system and the motivation for players to progress in the world of Citadel: Forged With Fire.

The problem with progression however, lies with the world itself – it can sometimes feel a tad empty, despite its graphical allure. Base-building often requires a lot of resources and many items and spells require materials and elements only found in certain areas on the map – all the while you need to replenish your mana so that you can defend yourself against the environment and other players. This is where the apparent need to grind comes into play, as with most online survival titles – it’s a great shame as it puts a dampener on the amazing potential of Citadel: Forged With Fire.

It’s worth briefly mentioning that Citadel boasts quite a comprehensive progression system, similar to the one seen in Ark. The player earns knowledge points upon levelling up and can spend them on learning recipes. Said recipes include base-building elements, weapons, clothing and armour etc – all adding to the feel of the game. This also gives players the ability to build themselves a little wooden hut to begin with, all the way to a mighty and sprawling stone castle complete with throne – pretty cool right!?

Overall I have to say I really enjoy Citadel: Forged With Fire. The core mechanics feel solid, it looks amazing and the spell-play is simple yet enticingly brilliant. These are the things that will draw me back to the game to play more, yet I hope the developers can flesh-out the world and bring a sense of balance to the need for resources in order for players to progress. Citadel: Forged With Fire is often on sale, so go pick it up if you fancy a magical new take on online survival titles.