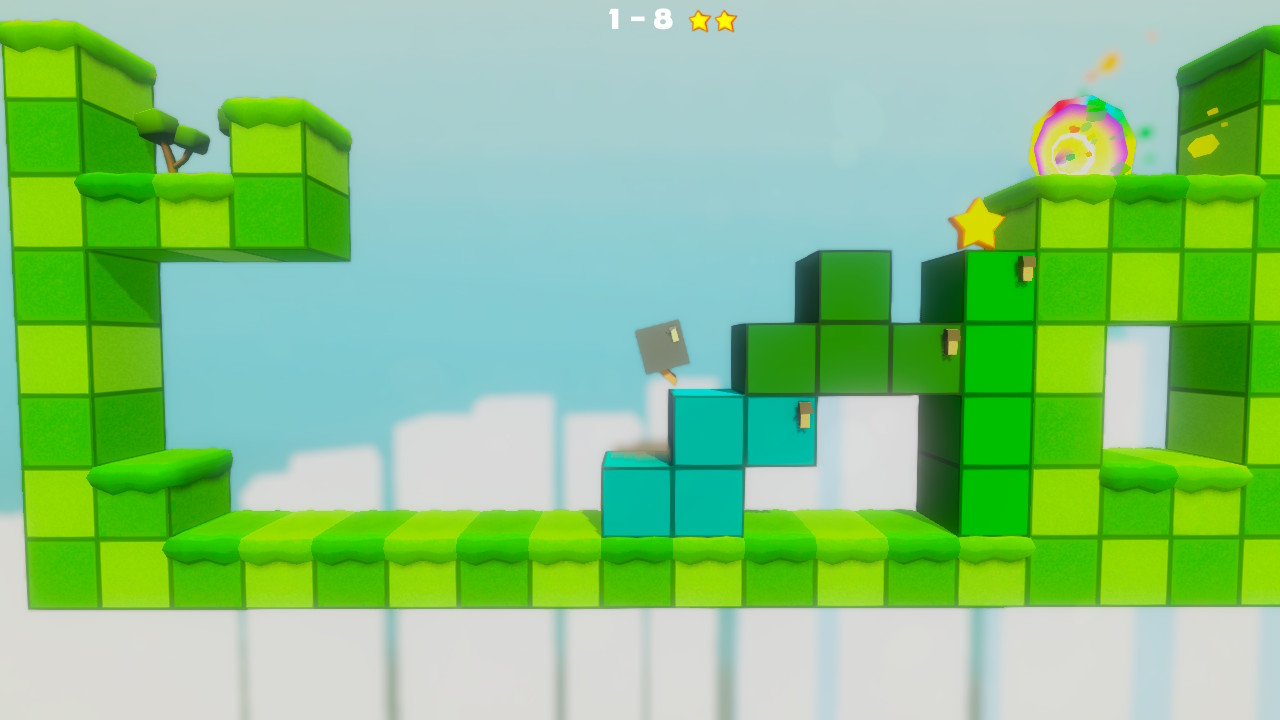 You can’t deny the classical status of the puzzle game, Tetris. After all, it was one of the first of its kind within its genre and has since spawned many iterations of its elements, as well as a number of imposters that have tried on many times to steal its crown, yet nearly always failed. However, despite its success, it’s a game that’s getting a little old in the tooth now. So, what better way than to refresh its worn-out blocks, by giving it a whole new lease of life in a puzzling platformer that takes full advantage of its shape-shifting ways on the Playstation 4 and PS Vita.

Developed by ABX Game Studios and published through Ratalaika Games, Tetra’s Escape follows the exploits of a series of blocks known as Tetras. Through their shape-shifting ability, transforming them into Tetrominos, you need to traverse a series of 2.5D levels by creating blocks, bridges and pillars in order to overcome each of the levels’ pitfalls. You see, the tetras can only climb up one block at a time within the landscapes and by using the help of their buddies, they can build into shapes that change the landscape, allowing at least one of the tetras to make it to the end level vortex and escape.

It’s a simple premise, but that’s the charm of this game. It’s basic in look and in its mechanics, but in its challenge in finding the right solutions to escaping each level, it’s no walk in the park. Each of the levels are built up from a number of blocks, some of which leave the landscape in an impassable state. However, a number of Tetras also inhabit the level, their colour-coded forms detailing the form of shape they can take; with some even being able to shift into a variety of different blocks. The challenge lies in what tetras to utilise, which form they must take and in what position they need to transform within the level. 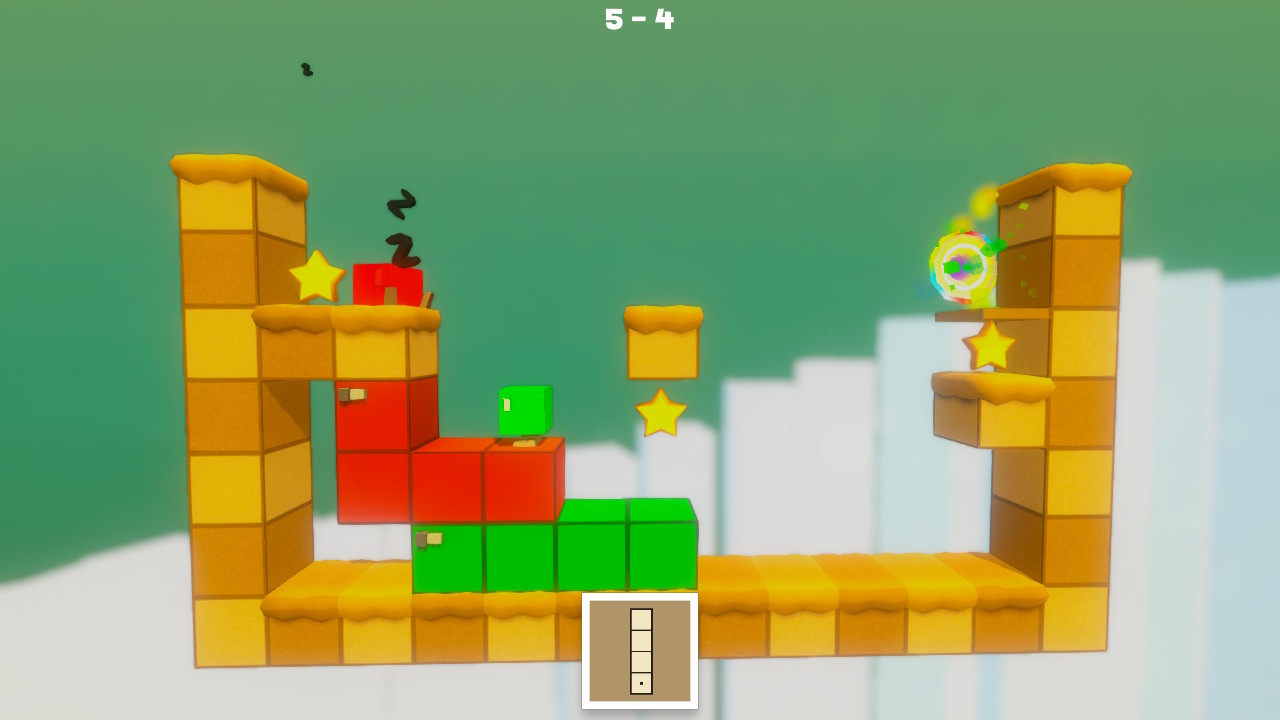 Everything starts off easy enough, the early levels guiding through a tutorial to how its mechanics work. However, as you progress things get decidedly more tricky. The more tetra’s that inhabit the level and the wider the variety of shapes they can form, brings with it any number of possibilities in building within the levels, but usually only one solution to the puzzle. It creates an instantly accessible game, but also one that brings a satisfactory challenge in its level of difficulty. There’s nothing head-bangingly frustrating here, but each level does require a good use of the old grey matter.

Each of the levels are suitably short; filling the screen with its entirety. However, they all have different layouts, as well as differing tetras to help rescue. Despite the core game mechanics remaining the same throughout, its variation in level and tetra design help to keep things fresh. In fact, its puzzling mechanics feel quite unique in their presentation. As well as trying to reach the end-level portal, each stage also contains three stars that can be collected, as well as a trophy which appears when all the stars have been obtained. Some levels require you to revisit them, building a different set of structures that allow you to reach stars or trophies that may have been previously missed, or impossible to grab the first time around.

The control scheme for the game is suitably mapped, with movement being implemented with the left analogue stick, transformations being selected with Y, whilst the shoulder buttons cycle between tetras and rotate through the various shapes on offer. You can experiment with different shapes and positions before committing them with the A button; however, you can’t overlap blocks, producing a limit to the positioning of each shape. Once you commit though, there’s no turning back apart from restarting the current level, so be sure to choose wisely before giving the tetromino’s their final form. 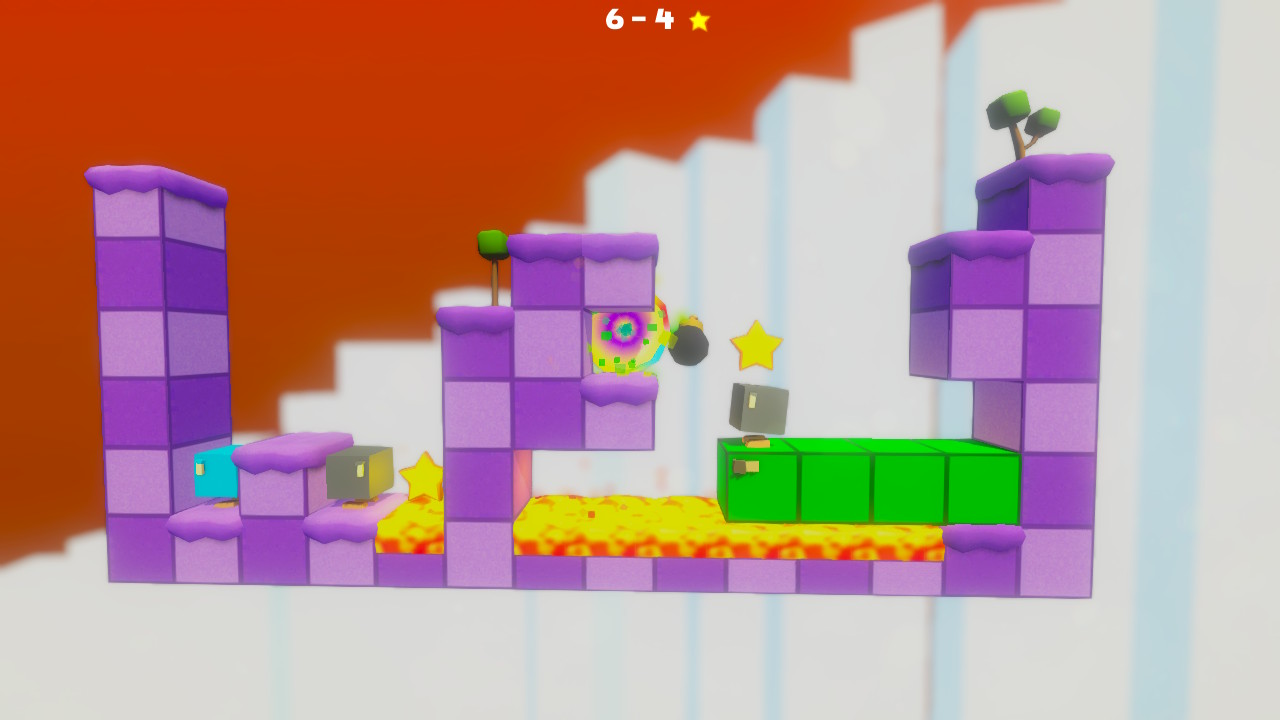 In all, there are sixty-four levels to work through, giving around seven hours or more of playtime; depending on how thorough you are with collecting all of the stars and trophies. Each of the levels are split amongst a variety of different worlds, offering changes to the backdrops and colours of each level. There are also a number of other elements that come into play as you begin to progress through the game, such as gravity inversions and bomb blasts that free the tetrominos from their shape-shifted form. It all adds to keep things fresh, as well as forcing you to think ahead as you plan your next strategies for the levels ahead.

Although basic in its presentation, the aesthetics of the game contain a certain charm, with colourful levels and likeable Tetras. However, in this respect, I did feel that everything was better suited to the PS Vita’s screen, rather than playing on the big screen of the PS4. Even the control method felt more at home on Sony’s portable machine, but this is only a personal preference really and not something I would say is set in stone. Trophy support is also implemented here, including the coveted platinum. There’s nothing too tricky here, but that largely depends on how well you are able to figure out the solutions to the game’s levels.

Overall, Tetra’s Escape presents a platform puzzler that holds a large degree of appeal. Its family-friendly presentations and suitably challenging levels holds enough content to keep you busy for the long-term. With its cross-buy mechanic, you really can’t argue against its value for money; especially with a pocket-money pricing. If you love all things Tetris, then there is a great deal to love here, presenting a very different take on its mechanics, yet offers the same level of satisfaction with its solutions. It feels quite unique and its simplicity produces an easily accessible game that will appeal for all ages. Its difficulty fluctuates at times, spiking and dropping at certain points, but its puzzling mechanics holds just enough clout to keep you playing. If you like casual puzzle games, then this is a title that you won’t go far wrong with.

Once you get blocked in by this puzzle-platformer, there’ll be no escape from its cutesy charms.