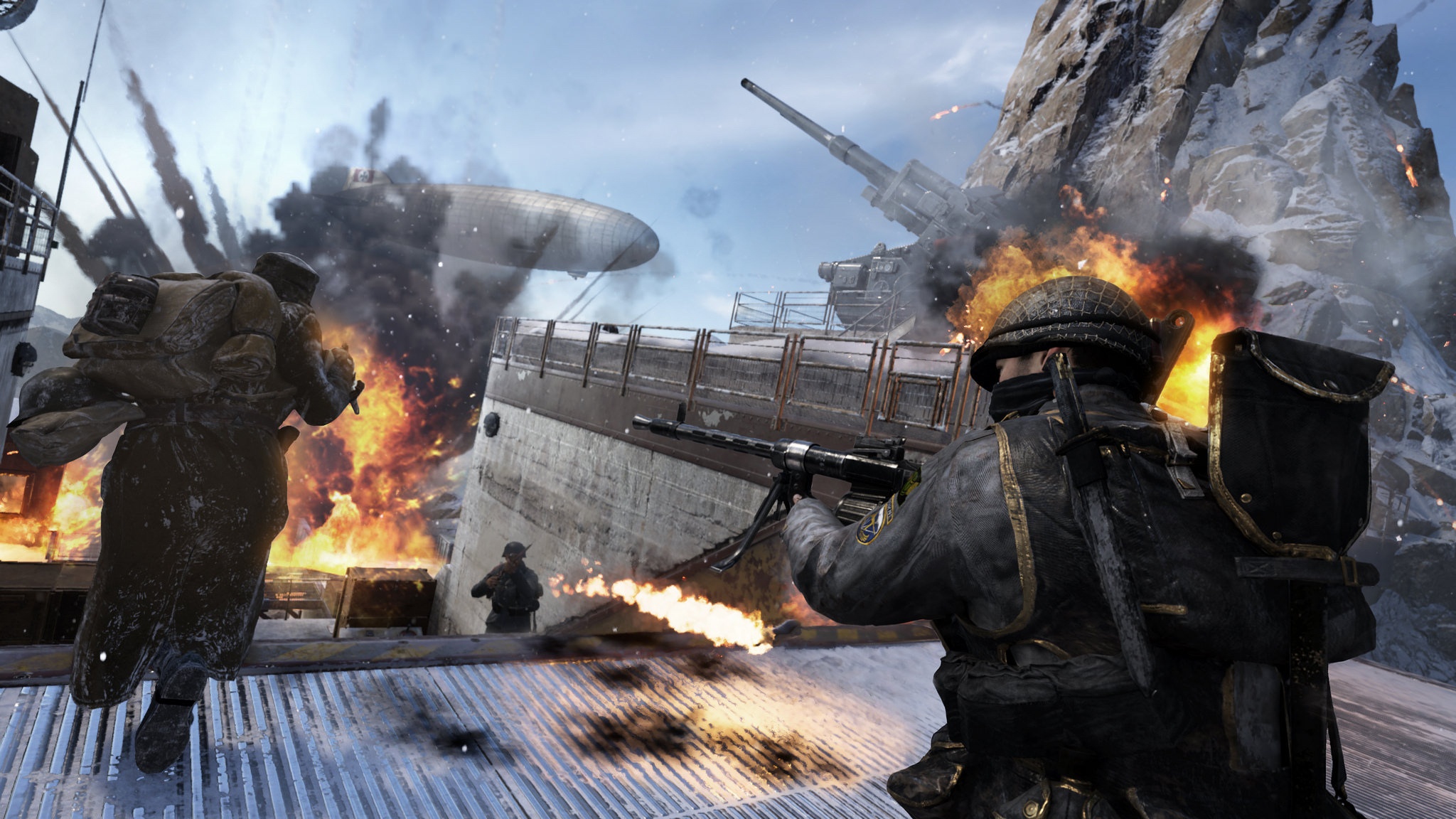 Roughly three months after I have written my review of Call of Duty: World War II, I began to doubt myself, and my judgement.; as each and every single time that I’ve returned to this particular title, I felt like it is perhaps not as good as I’d initially thought. And while my opinion on its narrative campaign remains unchanged to this day, then I cannot say the same about its zombie mode, and multiplayer; as those two have been heavily impacted by numerous hot-fixes, patches, and most importantly DLCs.

As months passed, and seasons began to change, so did Call of Duty: World War II. About six months after its launch, the once down-to-earth, slow and methodical shooter, which at the time was hands down the most unique Call of Duty experience on the modern consoles, has turned into yet another bland, and indistinguishable COD, the like of Ghosts, which was nothing more than a mix of different mechanics, pulled straight out of the franchises catalogue, and jammed into one unattractive, and deformed package. And the recently released Shadow War Map Pack, is a great representation of this phenomena, as it mirrors the current state of World War II, nearly one-to-one.

Just like all the previous map packs, the Shadow War add-on features three multiplayer maps, one war operation, and last, but certainly not least, one zombie map. And while aesthetically, it tops all the previous efforts of Sledgehammer Games, as all the maps featured in the DLC, are easily the most visually attractive of all the additional content released to date, then unfortunately it is all not as meticulously purpose-built, as one would perhaps like it to be, or even expected.

The core three multiplayer maps are titled Airship, Chancellery, and Excavation. The first, takes place on a picturesque mountain base designed to dock Zeppelins. It is incredibly open, features the most vertically placed platforms out of all three maps, meaning that it allows you to approach gunfights not just from different angles, but also from different plains. However, unlike Call of Duty: Black Ops’ Summit, which is very similar in design to Airship, it is way too big for its own purpose. And in-game it often feels like a large portion of the map remains untouched, as all players naturally gravitate towards the ‘mid’, and upper portions of the base, and more often than not, leave the lower passages desolate, and largely untouched. 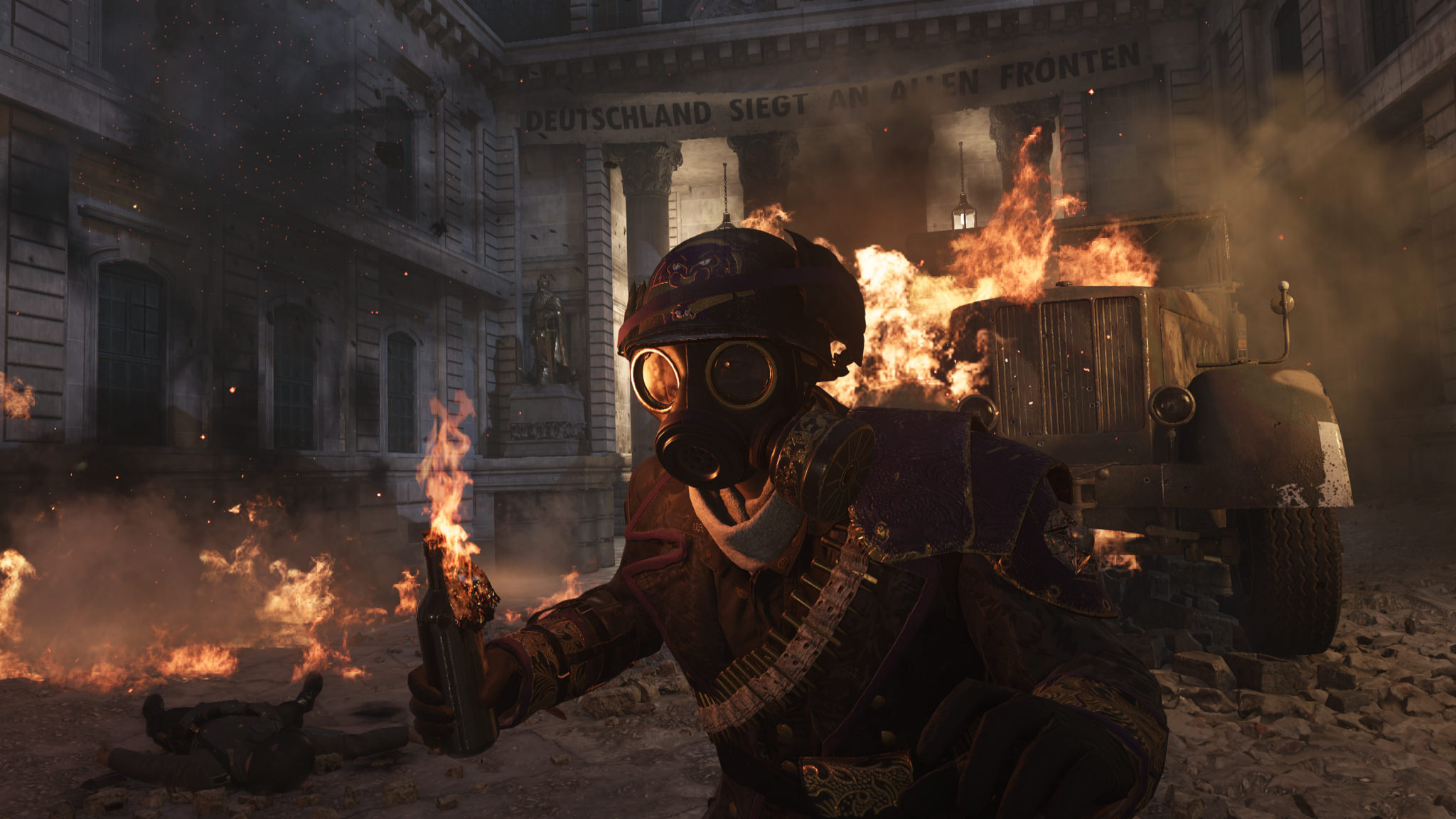 The second of the three, Chancellery, as the name suggests takes place within a consulate-like space, which has been partially destroyed by repeat bombing. And this particular map is hands down the most intriguing out of all three, as unlike the other two, it allows you to utilise any approach which you may find desirable. And it is also the most visually diverse out of all the content featured within this pack, as it is full of mahogany clad, glistening marble corridors; grime filled, cobblestone pathways; and lastly, it is full of burning rubble, which fills large portions of the maps. And the parade of flame, which engulfs numerous rooms, and hallways, provides one with great contrast to the remainder of the map, which in comparison could be seen as pristine.

Excavation, is the third and final map. And I have purposely left it for the very end, as it is the weakest link of not just the multiplayer maps featured within the pack, but of the Shadow War DLC, as a whole. And that’s because unlike the two, it is a flat, overly complex, desert-centric map, which unlike the previous two maps, is simply boring and uninteresting. And sure the mining tunnels which run through the center of the map, do add a certain level of intricacy to it, but overall, just like the remainder of the map, those are simply overdone, and largely unnecessary. Overall, Excavation feels like a dollar store version of Afghan, but one which is nowhere near as exciting, nor captivating.

Overall, the core multiplayer maps are a mixed package. First, you have the rather superb Chancellery, which does not just look good, but also plays incredibly well. Right in the middle, you have the breathtaking Airship, which easily is the most impressive map of Call of Duty: World War II, as a whole – but in its design it lacks significantly, and it is nowhere near as accomplished, as the aforementioned Chancellery. And lastly, there is Excavation – the ugly duckling of the package. A map which is neither attractive, nor enjoyable, and as a whole, it feels like it has been cobbled together in a rush, just to fulfill a quota of the three required multiplayer maps, for each DLC. And it has to be said that if those maps, were the only three pieces of content which could be found within the Shadow War DLC, then it would be incredibly underwhelming. But fortunately for you, and Sledgehammer Games, just like all the previous DLCs, Shadow War also features a war operation, and a zombie map.

Shadow War’s one and only war operation is titled Operation Arcane, and unlike all the other operations featured to date, Operation is nowhere near as serious, or as drab. And while it may oscillate around the same activities, which have been mulched to death by all the other operations, then what makes it stand out, is what those activities are centered around. Yes, you still have to A: detonate a charge, B: smash & grab weapon parts, and C: escort a tank to the exit. But in Operation Arcane, you are not just stealing fuel, or documents, but plans and parts for a Wonder Weapon, and one which you can use throughout the mission. As upon completion of the second step of the operation, the Wonder Weapon can be picked up and used by any player. So if your team is not fast enough, you may be faced with a task of having to escort a tank, while staring down a barrel of gun which fires one-shot one-kill jolts of electricity, right at you. 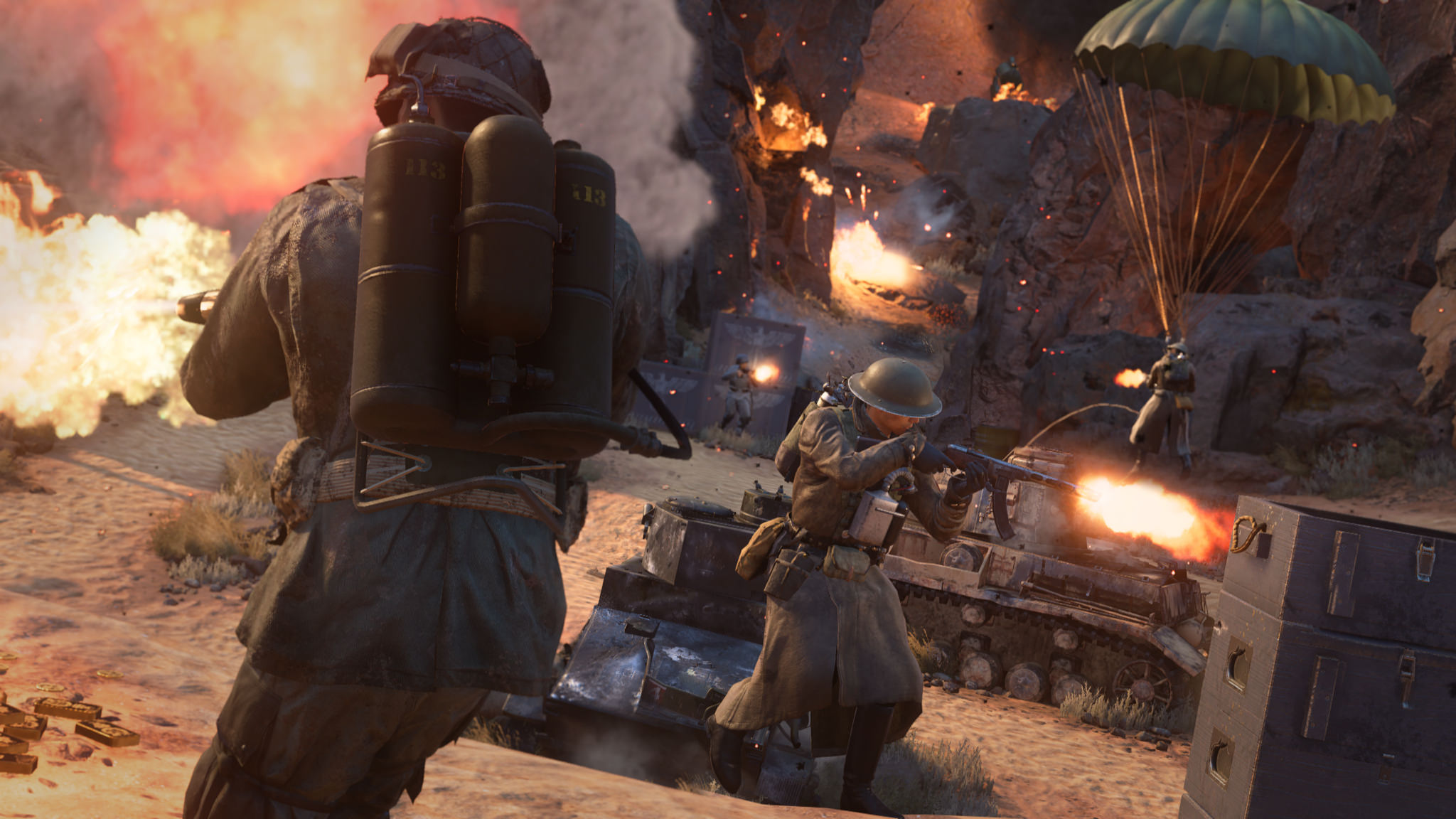 At its core, Operation Arcane is really nothing to write home about, as in its structure it is incredibly similar to all the other war proportions. But its tongue-in-cheek nature, and the addition of the Wonder Weapon turn the otherwise boring operation, into one which feels legitimately exciting. And sure, one new weapon and a sci-fi setting may not feel as much to some, but to those who spent the last year playing the overly serious, and at times depressing World War II operations, it will feel like a brand new, and unexplored world. And while it may not provide one with as much closure as the final zombie map, then it has to be said that Operation Arcane, gives World War II’s multiplayer a breath of fresh air, which will pull it all the way until its final days in the spotlight.

The final part of the Shadow War package, is as mentioned previously, the very final zombie map, which seeks to close the book of the unlikely heroes, which were introduced to us nearly a year ago. And as it is a very final map, in this year’s cycle, Sledgehammer has decided to return to the single-location formula, and has not featured three smaller locations, like it did within the previous DLC. And many will rejoice because of that fact, because as intriguing as the previous zombie experience was, it was nowhere near as captivating as the one which was established by Treyarch all those years ago. And without spoiling too much, all that has to be said about the ice clad Frozen Dawn, is that it provides the mode with a fitting send-off, which while heavily relying on the frozen stylistic of the final location of the Tortured Path, expands upon it exponentially, and provides one with a true zombie experience, which will easily keep you busy until the release of Black Ops 4.

In conclusion, just like the previous expansion packs, Shadow War is not perfect. But because Sledgehammer Games did not have to stress so much about the reception of this package, as many have already moved their sights onto Black Ops 4, they have created the best DLC pack to date. And sure, Excavation is not as good as it could be, and Airship is a little too big for its own good, but despite of their respective flaws, all featured maps are simply fun. And you can feel that developers behind the expansion must have had fun developing it, as it is nowhere near as depressing as the previous three packs. And this is clearly visible through the addition of things such as the aforementioned Wonder Weapon. This alone, makes Shadow War the best map pack to be released for the now retiring Call of Duty: World War II, and while it has taken the developer sometime to release a quote-on-quote good DLC, then it is better late than never.

The best map pack to be released for the now retiring Call of Duty: World War II, and while it has taken the developer sometime to release a quote-on-quote good DLC, then it is better late than never.