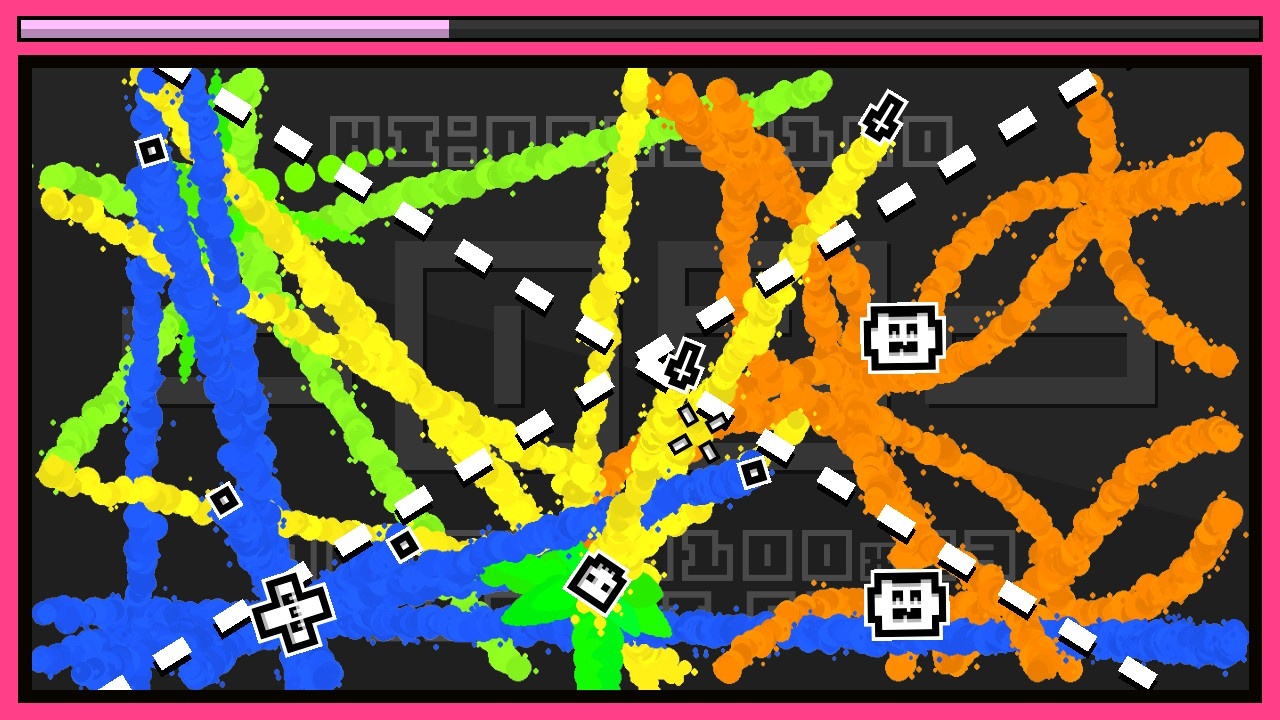 Twin stick shooter Inksplosion is the order of the day, there’s no story, there’s no tutorial so it appears Inksplosion is aiming for the play-just-one-more-time market. It’s always hard to review a game like Inksplosion, because the structure of it relies on challenging your stubbornness and the belief that you won’t stop after a few goes. So let’s see what Inksplosion has to offer and what may be lacking.

Inksplosion is a twin stick shooter, so one stick is used for movement, up, down, left and right, whilst the other stick is used to point towards the direction you want to shoot at. It won’t take long to get used too, but it may take a little while to become a navigation expert. Inksplosion is played from a top down perspective. Each level is randomly generated in design, there are a multitude of dotted lines that appear in different formations which hurt your skull shaped ship, so the idea is to not fly into them. Sometimes the lines rotate/move, sometimes they flash on and off and other times they remain static. The basic premise of Inksplosion is to destroy the enemies that appear on-screen, when you’ve beaten four of them, another four appear and so on. Unusually in a game like this, there are no power ups, however your weapon changes each level; it may be a rocket, 3 shots coming out at once or a laser for example. 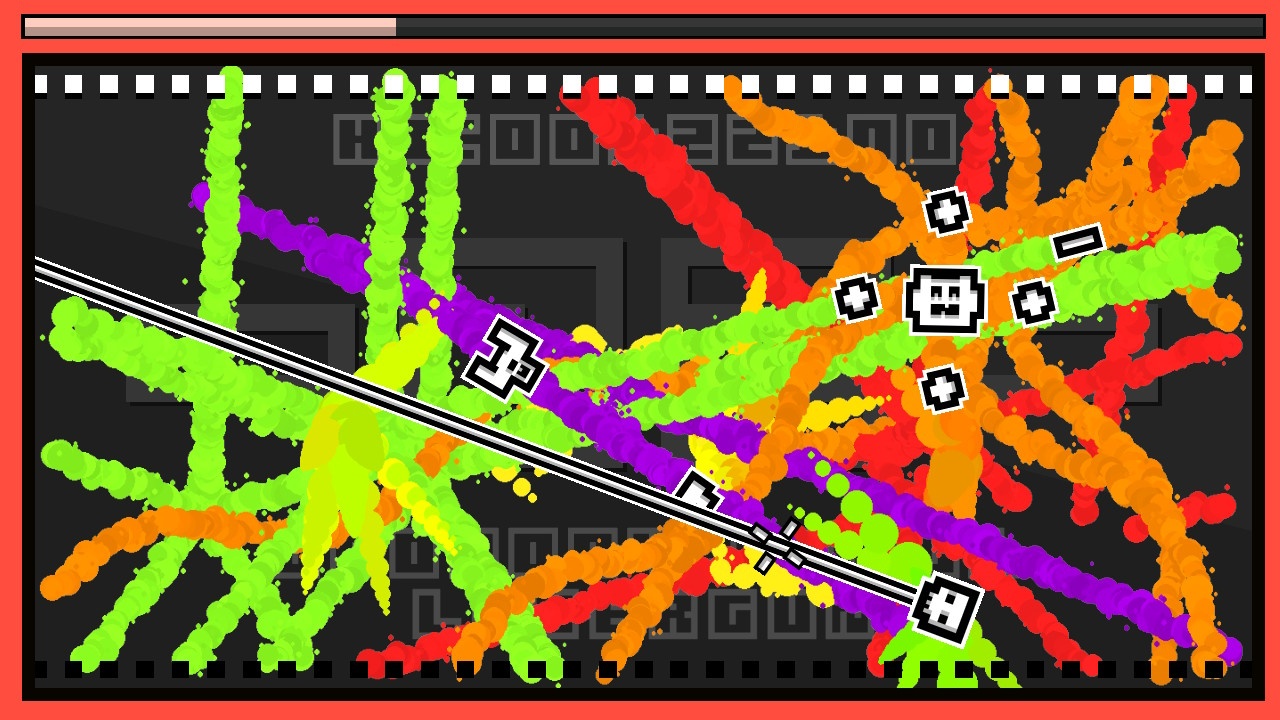 As mentioned previously there is no plot to get engaged with nor is there a tutorial to practice on. There are 3 modes to get to grips with. Classic mode has a level structure as enemies come in waves, so beat the four enemies on-screen will move you onto the next level, it doesn’t seem to get any harder as you progress as the levels are randomly generated. Once you hit 100,00 points you open up Arena and Hard mode. Arena mode is almost identical to Classic mode, but instead of a level structure it’s more of a non stop free for all, again it comes in waves of four enemies. Hard mode is like Arena but the enemies are just harder to kill.

There are a few different enemies, some shoot out homing missiles, some are shaped like crosses where their bullets come out of the ends of each cross whilst others shoot out a wavy projectile which is probably the most annoying to contend with. Your ship has a life meter at the top, if you get hit by a line or one of the enemies shots then it decreases, when you destroy one of them then your life meter replenishes. An additional tactic you can use is your ability to slow down time which is useful for dodging incoming fire however this also reduces your life so you need to use it sparingly. At the beginning you’ll often forget about this and use this ability to get past one wave only to be killed by the first shot of the next wave. 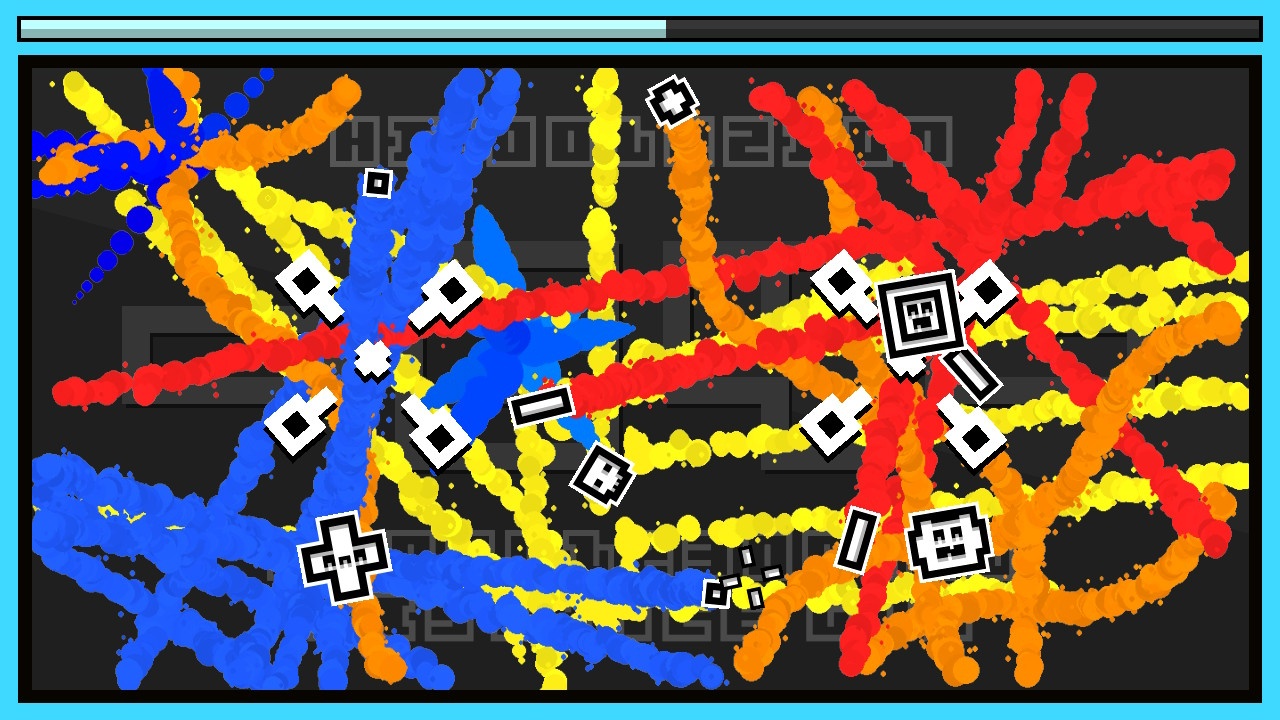 Inksplosion is a very colourful and boldly bright game, when enemies blow up they leave a trail of colours that fill the screen, this can be a tad disorientating at the start. The enemies and your ship are small white objects on-screen, very little detail in them but it doesn’t detract from the overall gameplay. For trophy hunters Inksplosion is a very quick platinum, you could technically collect all the trophies within twenty minutes depending on skill level. There’s no online leadersboards or co-op modes available, so it won’t take long until you’re likely to get pretty bored as there’s no challenges besides beating your own high scores.

Inksplosion is a very simple game in both design and gameplay. Once you’ve unlocked the other two areas the only thing to keep you interested is the challenge to beat your own score. The lack of multiplayer or online leaderboards really restricts Inksplosion, as there’s not enough single modes to keep you interested for more than half an hour. If you want an easy Platinum to add to your collection then Inksplosion is worth it, but beyond that it is quite hard to recommend such a simple game with little longevity.

What happens when you mix ink with explosions? Obviously you get…… Inksplosion!