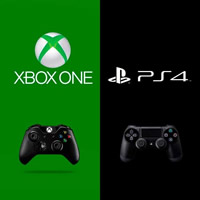 We keep hearing how games rather than graphics sell consoles, that the rise and rise of iOS gaming  and success of the Wii proves this, that consumers are after innovation and convenience rather than horsepower and spectacle, but graphics, you know, being a big part of most games, don’t they still have a role to play? Can they still amaze the masses and sell a console or an otherwise ‘by the numbers’ videogame? While a game can certainly be sold on its gameplay alone, isn’t sheer graphical grunt still enough to shift units? After 8 years of the same tech, I’m inclined to say yes.

I crave innovative gameplay and new ideas as much as the next guy, but come on, who isn’t excited to see just how pretty games are going to be running on the new hardware from Sony and Microsoft. Sure, iOS is convenient and yes, the current gen still looks pretty great, but there’s still something to be said for a new product that can, on a purely visual level, blow your bloody socks off. Of course, balance is key, and visuals alone aren’t going to sell a console in the long run, but as an introduction to its capabilities, I’d say that they will remain a huge part of the experience and a major aspect of each consoles marketing push.

Take Motorstorm for instance. By the second and third iterations, visual polish wasn’t enough to shift units as players got savvy to the fact that the gameplay was actual a bit, well, for lack of a better term, ‘meh’. But go back to the PlayStation 3’s launch and Mototrstorm was hot shit. Why? Because it looked great and a was a brilliant way for both PlayStation to show off its new tech and players to show off their (outrageously) expensive new purchase.

Will the leap in visual fidelity be so dramatic this time around? Probably not, but that doesn’t change the fact that improved visuals will still play a major role is selling the next-gen to the masses.they are the easiest way to show the jump in power and above all else, good graphics look great in adverts…..why do you think so many adds go to such great lengths to tell you that what you are seeing is “in game footage”.

In fact, given the popularity of the current-gen and the fact that we are likely to see extended support for both the 360 and PS3 and an array of cross-generational titles on both of Sony’s and Microsoft’s consoles, it will most likely remain the improved visuals above all else that will set, for example, the next Call of Duty on Xbox One apart from the simultaneously released 360 version.

Again, I’d like to stress that innovation is paramount to the potential success of both the Xbox One (NextBox, SexBox…whatever) and the PS4 (Orbis thing), especially in the long term, but in the more immediate future, will graphics matter? Can they still be relied upon to seel the next-gen? You bet your ass they will.