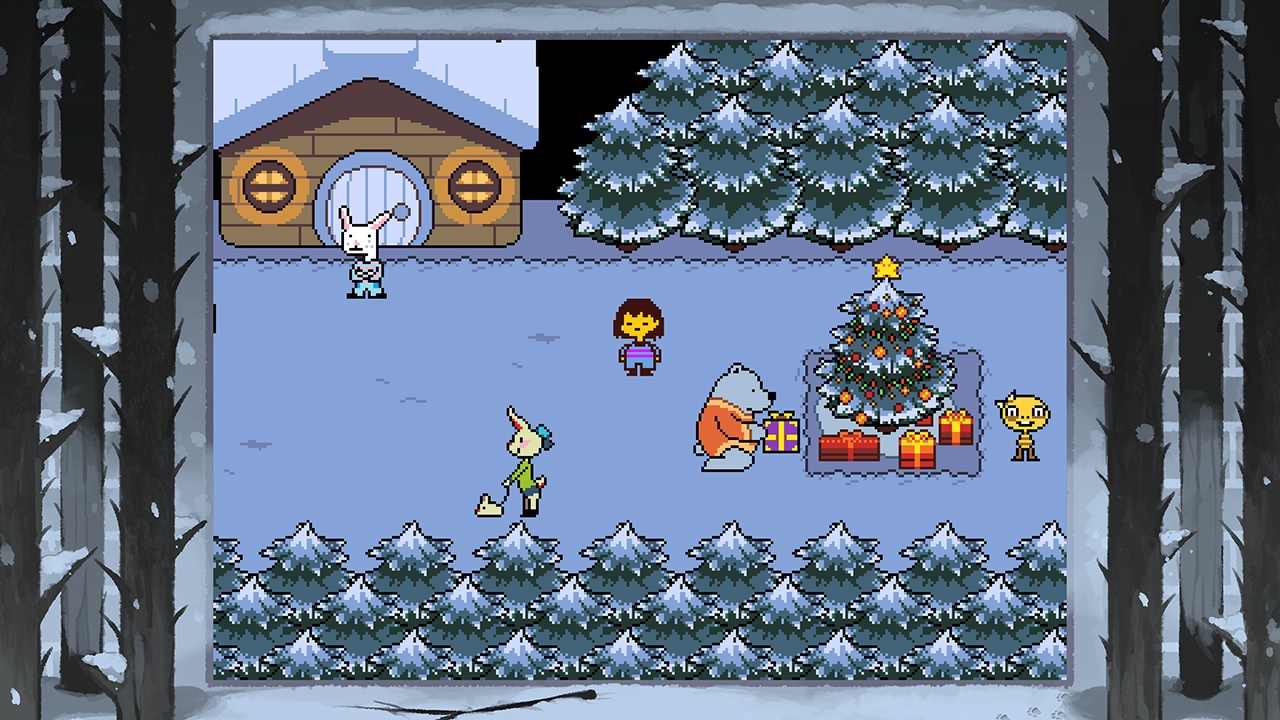 The effects of video games on people is always a fascinating one, and they produce a lot depending on the person and the intent. For some, like relaxing puzzle games or simple matching titles, they allow people to just tune out the world and enjoy something for a while. For epic RPGs and adventure titles, you get lost in a magnificent, sprawling world, usually peppered with an immense amount of lore and ideology that spawned from the mind or minds of greats. And sports games, shooting games, simulation games…they all have their audiences, and they create the appropriate sensations of loss, victory, frustration and vindication in turn. So when a game comes along and deeply polarizes the population, it’s important to take note, even if you happen to be on the opposing side of the group. Just three years ago marks the release of Undertale, one of the biggest reactionary titles I’ve ever seen, and, very soon, it will be coming to the Nintendo Switch.

The story of Undertale is deceptively simple. There is a world of humans, and a world of monsters, a schizmed existence created by some kind of tragedy many years ago. The monsters live in the underground, banished from the sunlight, and humanity has completely forgotten that monsters exist at this point. A human child, by chance, has fallen through a hole and landed in the monster world. Initially taken in by a caring, motherly monster named Toriel, the human is determined to find their way to the surface and back to humanity. However, as the story unfolds, we find out there are many factors at play. The King of the Monsters is very interested in the human that’s landed, and sends his troops to kidnap them. Some monsters wish for the human to find freedom so they are not trapped like the others. And, as it turns out, the human may not have landed in the monster world by chance.

A first glance at Undertale is something marvellously underwhelming. When you hear people and fans rave about this game, you get a certain impression, and, upon viewing it, you realize this is a very simple, pixel based, almost pre-SNES style design. The human character, which you can name almost anything, is purposely androgynous so you can make it whatever you want in terms of character projection. The landscape is beautifully designed but, ultimately, pretty basic, especially initially. Later areas become more complex in beauty and design (I always love the Waterfall area and the echo flowers), but the appearance is still subpar in comparison to other massive RPGs that have landed on the Switch, such as Ys and Xenoblade Chronicles. There are great shots, don’t get me wrong, and moments of spellbinding overview (not to mention some particularly great monster designs), but the appearance is purposely meant to set your expectations low. 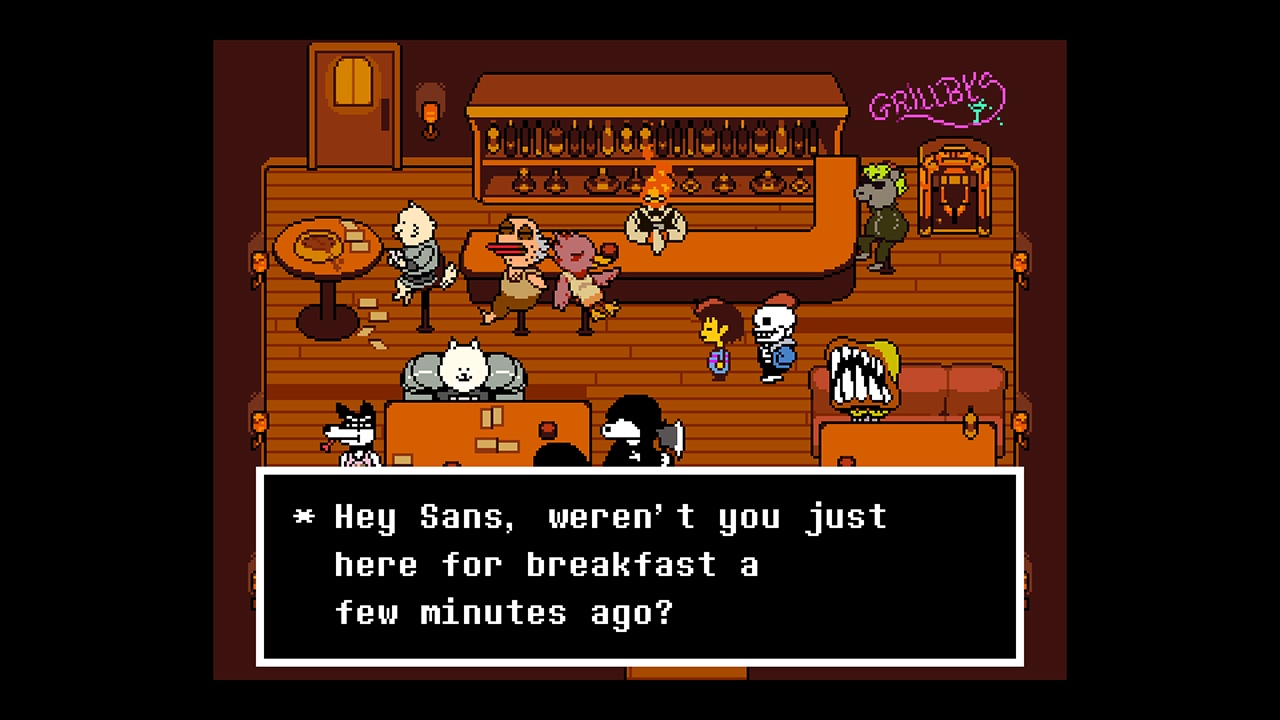 You see, Undertale is an RPG, but it’s a rather curious sort of RPG. Toby Fox, the creator of the game, took painstaking care to ensure that this is a game where you almost never have to fight anybody. Now, sure, there’s plenty of random encounters and combat, but you don’t HAVE to fight anyone. Instead, your character will have the option to “Act,” wherein you’ll have a set of choices that align with a particular monster. For example, an extremely muscular horse will give you the option to Shoo (try and chase it out) or to Flex (might as well get into a body building competition, right?). If you choose the right options, you’ll eventually be able to Spare monsters, ending the combat with a victory but without hurting anyone. Of course, you certainly have the option to start hacking away at the monsters, and you’ll be able to find and purchase weapons allowing as such, but it really is a choice you can make.

The return fire from the monsters is something to take note of as well. Rather than just punish you endlessly for opting not to hit, the monsters all attack in strange, graphical patterns that appear inside a tiny box, and you must dodge these patterns by navigating a heart that represents your hitbox. Tear bullets, spider webs, gouts of flame, spears, bones that spell “Cool,” and even dogs will all show up as targets that you do NOT want to hit, and you need fast fingers to stay alive. At this point, I must mention two things. One, not hitting doesn’t mean not preparing yourself, so buy some armor when you can to reduce the damage you might take. Two, if you’ve had any experience with bullet hell games, you might have a better chance of survival, though the heart isn’t exactly spry and agile like we’d hope. Still, you can usually get through most minor battles without taking any damage, and the boss fights (which can be LONG without hitting) will require some practice and a lot of determination.

Now, as an RPG, it’s important to take a look at Undertale and the story throughout, and this is what makes the game a goddamn classic and a modern masterpiece. Firstly, this is one of the few games that I can say, unequivocally, that you cannot play just once. Your first time playing through will take probably close to ten hours – between puzzle solving, item finding and dialogue talking – and will end with a rather abrupt, strange halt that the Nintendo Switch handles marvelously in terms of atmosphere and developer intention. At this point, you can begin again, and you really, really should choose what you’re going to do moving forward. Players should look at the first run through as a kind of a test to see what their fortitude with the game will be, and how they want to approach it. But believe me when I say: if you’re going to do something, do it all the way. Deciding to only kill enemies when it’s too hard to do otherwise OR to spare an enemy just because it’s too easy will net you a very bland, simple ending. You’ll want to go all the way, light or dark to see just what the game has in store. 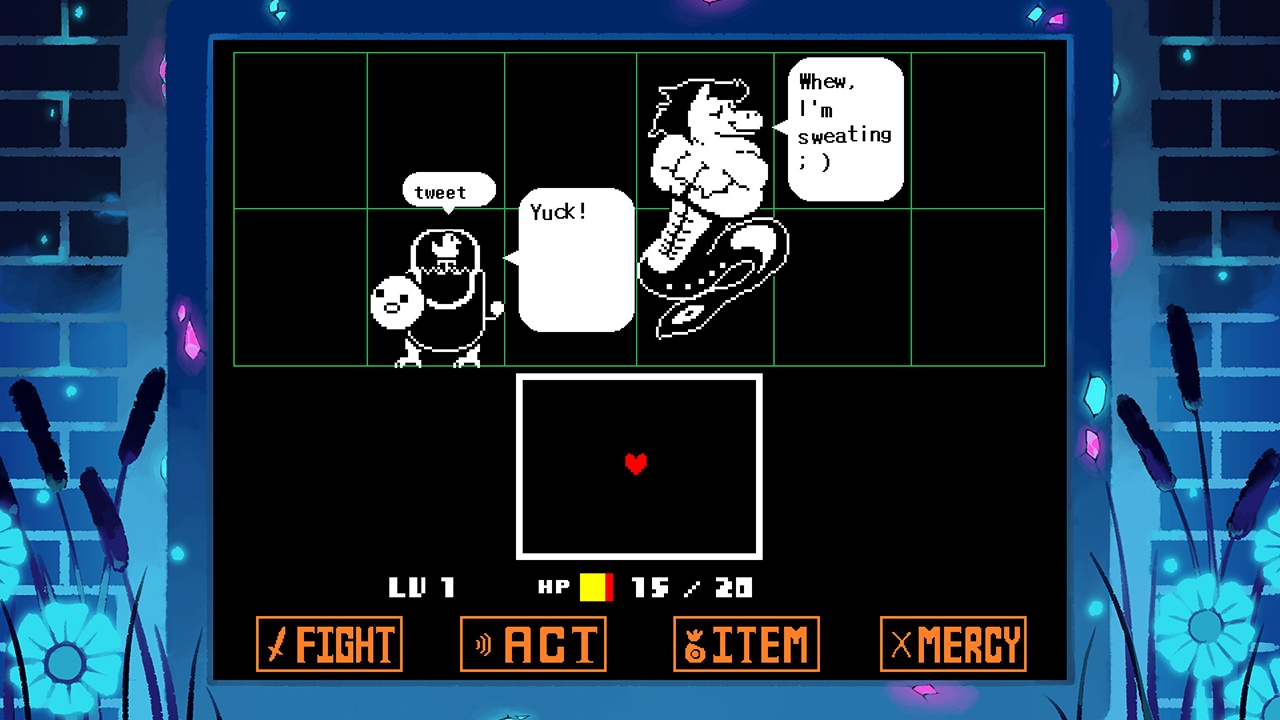 By the time you finish your first play of Undertale, you’ll hopefully be fully smitten with the game’s presentation. There’s so much clever and honestly hilarious text peppered throughout, from oddball conversations with the denizens of the Underground to bizarre and often non sequitur signs that appear in various places. When you get a game that does a lot of “random” humor, it can sometimes become tiresome and also lazy, because it comes across like the developer ran out of actual things to say (if they had any to begin with). The opposite is true for Undertale. The offbeat humor and speeches only help to better set the tone of the game for when some truly dramatic and emotional moments unfold, and the game doesn’t just horde them for the final reveal. There are moments throughout, from making friends with unlikely enemies to helping monsters understand their true selves, that make the game worthwhile. And this is all happening while aurally drinking in a fantastically atmospheric soundtrack that Toby Fox himself created. It’s so odd to me that there’s this massive soundscape that occurs throughout, and yet I always come back to loving that first track when the human must trek to Toriel’s home.

To answer your question as best I can: the Nintendo Switch port is worth it. The game still has a tiny footprint, certain oddities that make the game work on the PC still work here, and the controls of being able to dodge are mapped well to the buttons. I do recommend using the C buttons instead of the joystick on occasion, however, because some puzzles require precise walking and I made a couple of missteps with the joystick that resulting in huffing a sigh and trying again. There is new material in the game, but it’s only something that adds to the atmosphere of the game itself and not the lore of Undertale as fans have WILDLY expounded upon in the last three years. The extra is fun, however, and I’ve been specifically asked not to spoil it, so I won’t. This is what I will say, though. If you didn’t like Undertale previously – it didn’t rub you the right way, the gameplay was too strange, the story didn’t pace well – this isn’t going to change your mind. It’s still the same game, just portable now. If you already love Undertale, it’s worth double dipping for. You get some dope borders to help frame the game and keep the original aspect ratio, the new boss fight (!) is really quite fun, and now you have Undertale as a portable option! Not to mention Nintendo makes it very easy to delete save data, so, when you ultimately corner yourself, you have a way out.

Undertale has seriously been one of the biggest, best surprises that I’ve seen in gaming in years, and I’m glad that a whole new group of fans have the opportunity to give it a try. The amount of enjoyment and emotions that was drawn up by this earnest little game is unparalleled, and I will never regret backing it on Kickstarter, nor on double dipping to get the physical release when it drops. If you’ve heard of it and like it, you know you’ll get it. If you’ve tried it and hate it, fair enough, this isn’t any different. But if you’ve never been down this path before, then open up your heart to some LOVE and frisk around for some determination: you’ve got a hell of a journey ahead of you.

One of the biggest surprises in RPG gaming finally comes to the Switch, and it’s as delicious as cinnamon butterscotch pie.