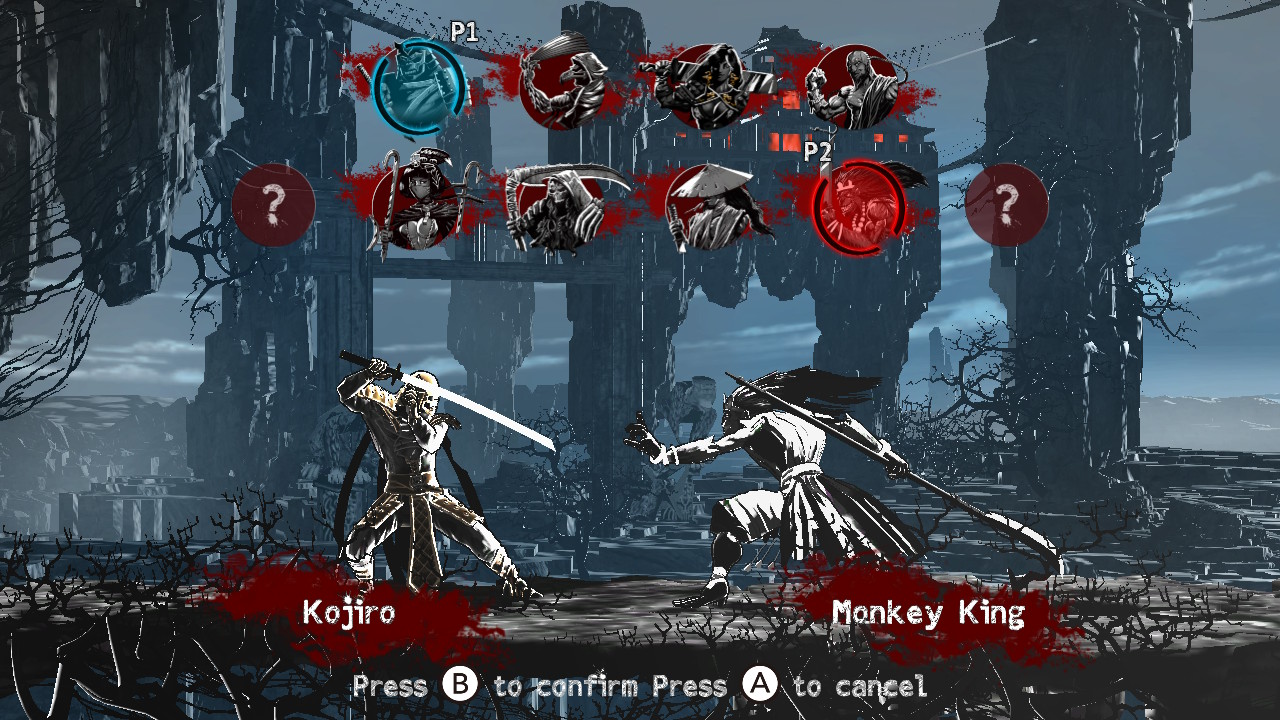 I don’t think anyone is out in the streets complaining about realism in fighting games. First of all, most of the titles revolve around this idea of a secret tournament that’s invite only, totally cloak-and-dagger, internationally renown and yet the police and other branches of law enforcement are powerless to even attempt to intervene. Secondly, the amount of punishment the average fighter takes over the course of a bout, even one where there are only fists and feet, is unbelievable. You mix in something like Soul Calibur to the fray and you can’t even figure out how a living nightmare like Voldo moves, much less survives being whacked ten or eleven times with a blade whip. Again, though, no one cares that they aren’t realistic: if someone wanted to do a realistic duel game, they’d do it, and, believe it or not, they did, once. Bushido Blade was a really dope experience, and someone took notice, remembered it, and decided to try the formula out on a new generation, with a new console, and a freaking fresh take on the game. With that, we take a look at the oddly titled Slice, Dice and Rice.

Slice, Dice and Rice is a fighting game that centers around a mystical rice that essentially grants massive wisdom, strength and power to whomever decides to eat it. There’s a dude who’s guarding the rice, but he’s not the official final boss of this quest. There’s a big ol’ death God who’s looking down on the whole thing, essentially a Japanese Satan, and he’s only benefiting from every fighter who falls during the struggle towards the rice. You play one of several fighters with various reasons to seek the rice: a tour through Hell to find the last battle, someone looking to find answers and vengeance, and the average monk turned yokai that wants to either regain his humanity or just become the best damn Tengu he can be, I wasn’t totally clear. There’s a variety of weapons, plenty of madness and blood in the sand. It’s time to Slice, Dice and Rice.

As you may have guessed, this is a one on one fighting game with the caveat of no health bars, no time limit and no real special moves. Each fighter has a horizontal strike, a vertical strike, a jumping variant of each and a heavy horizontal attack. Most of the time a single hit will kill the other player, and, if it doesn’t, it will cripple their ability to jump. Each match consists of the first to four kills: plenty of time to figure out your opponent’s style and strike back, turning the tide if your foe isn’t clever enough to introduce variety. Full matches can take a while if both players are careful and crafty, or the whole thing can be over in seconds if someone is brazen and foolish. This isn’t a game of combos, amazing chains and breakers: this is a game of patience, timing and split second reactions. 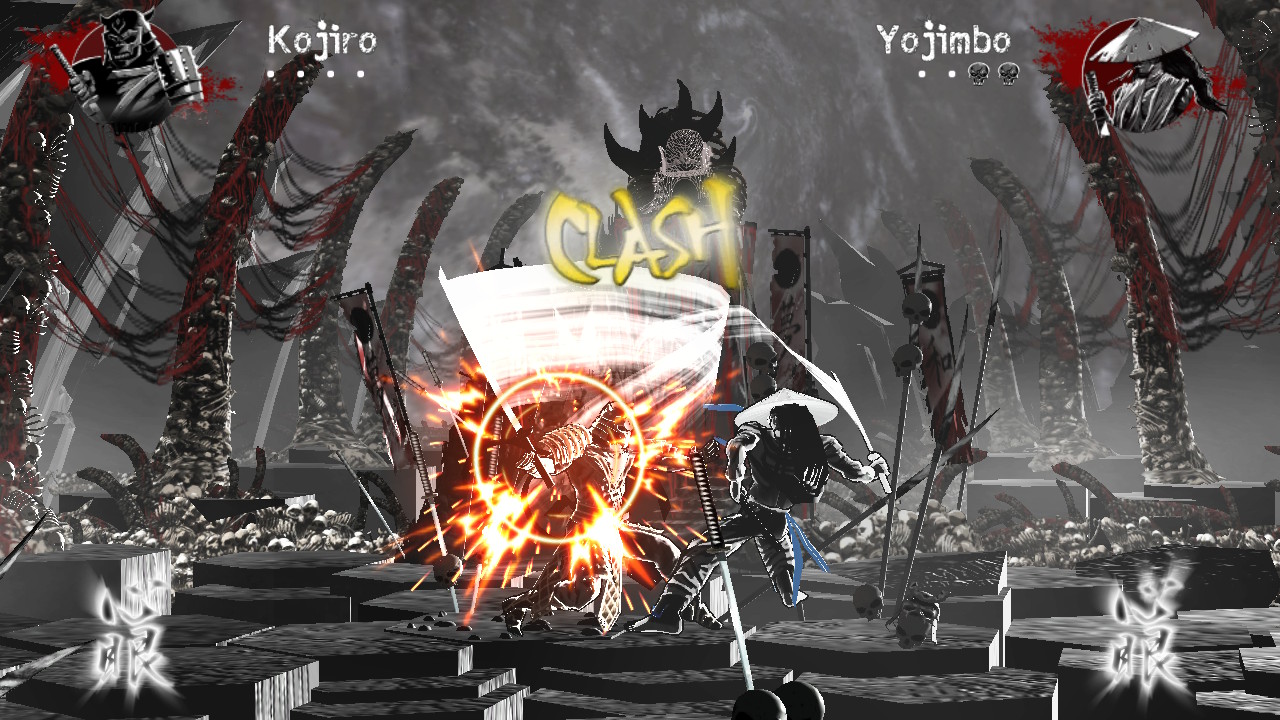 Thankfully, you don’t simply just die in Slice, Dice and Rice. If you can time your opponent’s strike, you might be able to jump or back dash to dodge out of the way. You may also be able to swing your blade at the same time and parry the attack, giving you a momentary advantage to deliver a killing blow. There’s no hope to parry a heavy strike, however, so be sure to keep an eye out for when your opponent is winding up for the big attack. Moreover, make sure you have the time and the edge before trying to execute one yourself: if you’ve spaced it out wrong, it’s frightfully easy for the faster fighters (Tomoe and Tengu especially) to slip in and slit your throat while you’re still trying to get the blade around in a circle.

There are a lot of things that Slice, Dice and Rice does right. Firstly, the atmosphere for the game is shockingly perfect, from the art style and the quiet soundtrack to the balanced amount of blood and gore. As this is ultimately a game that will travel through Japan-inspired hell and bring you to the gates of death, every level is done in a black-and-white paint style, giving the sophisticated brush ideas of ancient paintings and styles. Nothing is too on-the-nose, however, and you won’t be seeing iconic backgrounds from Japan’s history, but you definitely get the right impression about what Dojo Games was seeking to emulate with this title. The music isn’t quite wooden flute and samashin, but it’s still got that tone and quality to it that puts you in the woods, alone, against an opponent who wants nothing more than to separate your head from your body. Which, by the way, when it happens, is AWESOME. Far too often the deadly blow that you land is one that is surface damage only, causing a small spout of blood but nothing too grotesque. Occasionally, though, a heavy horizontal strike will land perfectly, cleanly decapitating your foe in a very flashy, slow-motion sort of way. Even better, since the death God is so big, you actually cut him in half around the upper torso, which is both appropriate in strike and also more visually striking when it happens.

As a multiplayer game, the concept is something that I desperately want to like more and more when I play it. The theory is that this is the ultimate way to settle disputes, either fighting game related or merely to sort out some kind of argument in the house. If I had someone try to throw down in a game that had a lot of intricacies to it (Street Fighter, Tekken, even Blade Strangers) there’s a good chance that I’d get my ass handed to me in a matter of moments. However, with the one hit rule of Slice, Dice and Rice, you always have that glimmer of hope that you’re going to be able to land that first blow, make that first move, really get in the hit and show that, yes, it’s okay to put ketchup on a hot dog. With just a couple of buttons, it’s faster to pick up than SNK Heroines, and I’m surprisingly more comfortable bringing Slice out in mixed company. 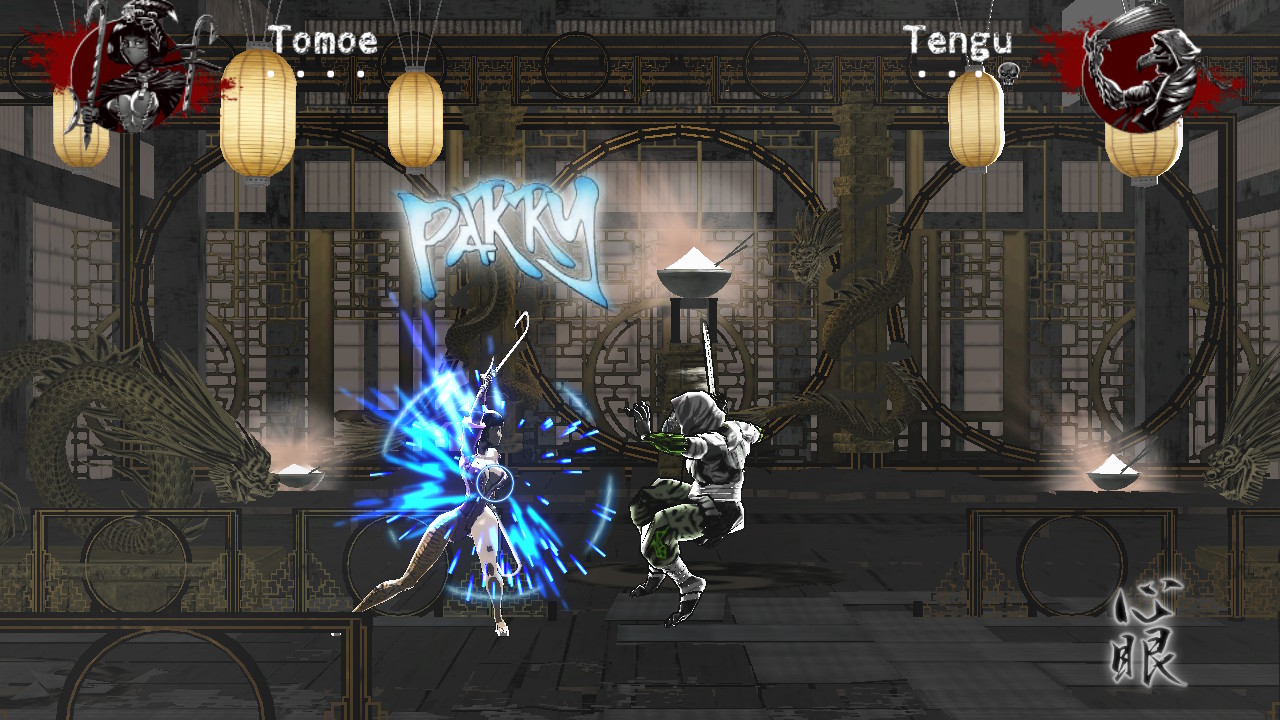 But that’s only if no one realizes what an unbalanced game it becomes depending on the fighter. Kojiro, the very first character (and the only one initially available for story mode) is far and away the most balanced, and, as a result, the best character for the game. Everyone else seems to be tipped a little too far in one direction or another. I had to completely relearn how to play the game to beat the story as Tengu because his strike zone is pathetically small and his hits are crazy slow. Monkey King has a decent reach but always seemed to lag just a bit behind in delivering anything that would count as a death stroke. I have no idea how the CPU played as well with Yoketsu as it did, because she seemed so sluggish and the buttons borderline didn’t make sense when it came to navigating her big ass sword. It eventually dawns on you that this is more like a real fighting game than initially conceived, but dammit there’s not enough time to figure that out before your skull goes skipping merrily across the floor.

Additionally, the game does play well…once it loads up. That first loading time when you cold start the game is so long I thought that my Switch had actually corrupted the download or something. I didn’t want to download it again because it weighs in at just under 2 GB, and my Internet is something terribly slow on weekends, but patience prevailed and I was able to get it up and running. It’s not even a complaint so much as a general warning to future players of Slice, Dice and Rice: do a NAND install if you can afford it, it makes all the different.

The overall tone and presentation of Slice, Dice and Rice more than makes up for some imbalancing with the characters, and I still had an absolute blast with the game from start to finish. It was hilariously awful how easy the characters can be on easy, especially when some would just run right up to me and wait patiently to be stabbed. But there’s no minor NPCS to deal with, no grinding for levels or learning how to perfect a backwards quarter circle to pull of the right move. It’s you, your blade, one opponent, and all the time in the world. Wait for the signal to draw your blade. Let the whole thing play out like the battle against O-Ren Ishii, patience and madness drawing towards a bloody conclusion. Or just rush in, screaming and swinging, and pray that the “Panicked Chimpanzee Style” gains you victory. In either case, there’s a lot of fun to be had here, and I hope they consider releasing a demo, because just a taste of Rice is enough to make you a believer.

Despite an odd sounding title, Slice, Dice and Rice does an excellent job of upholding the Bushido Blade legacy while carving a path of its own.