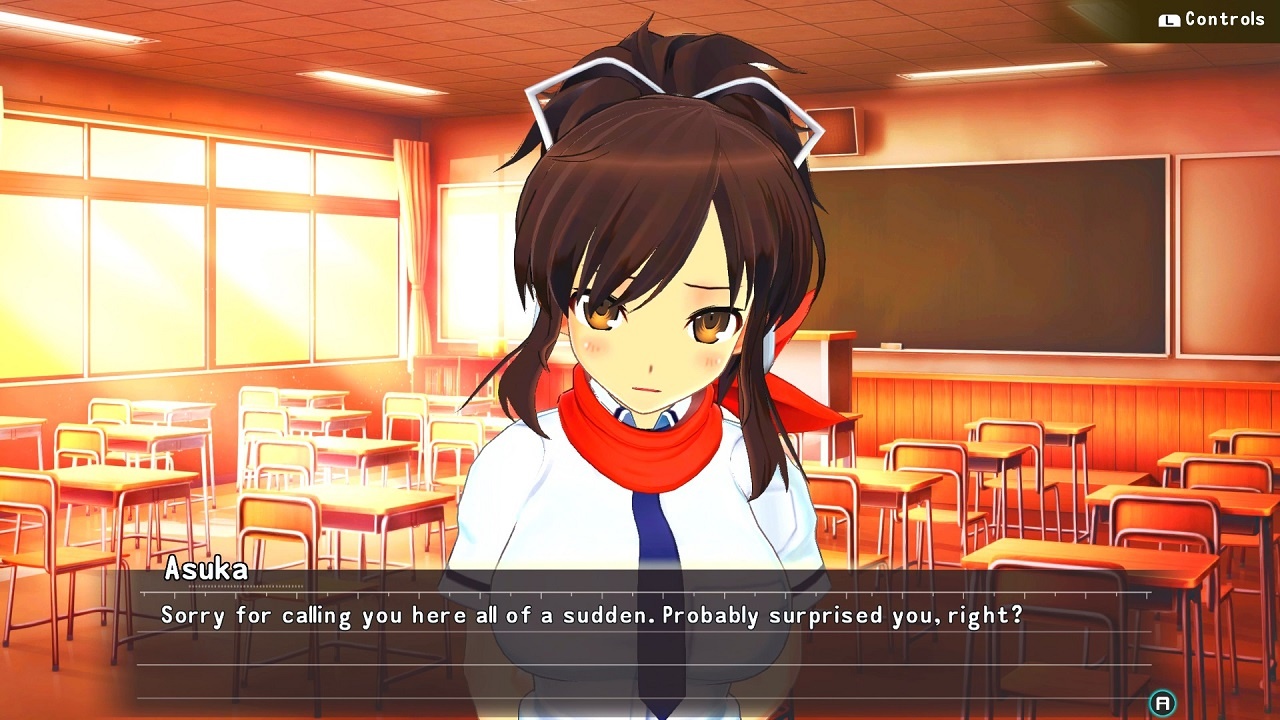 WARNING: This review is far more targeted and opinionated towards fan service and the expected audience of this game than previous reviews. Yes, even more so than Gal*Gun 2. If you are put off by language and descriptions of anime breasts and incredibly niche situations, please read something else. Also, if you already know you won’t buy it, don’t bother reading here to confirm your worst nightmares.

The singular, unapologetic belief structures of Kenichiro Takaki seem to have emboldened a whole new generation of fans across the globe. Rather than give some kind of half-assed, deeply nonsensical explanation for his character designs and reasoning with the Senran Kagura series, he’s put it frankly and simply: Tits are life, ass is hometown. The man has zero problems or illusions about his objectification of female characters in his games, and, despite what some people scream about, it’s worked out incredibly well in the department where it counts, which is sales. From a comprehensive and strong beat-em-up with destructible clothing to some odd choices of beach spots, the female ninjas of Senran Kagura have dominated the charts of Japan and the hearts of fans everywhere. And when the newest title was announced for the Switch, there was amazing skepticism if something like this could be localized for the rest of the world. After all, other games at least attempt to make up reasons why the large-chested females are always in embarrassing and revealing situations. But, against all odds, Senran Kagura: Reflexions has been localized to the rest of the world. And, dare I say it, we might be better off for it.

Senran Kagura: Reflexions is an odd and strangely endearing title that puts you in the classroom of the local high school. Asuka (or one of the other girls, if you get the DLC packages) is confused about her feelings towards you, and really needs something to help her think clearly and understand what’s going on. She offers up her hands, and you take them in your Joycon-controlled fingers. Through some targeted caressing and targeted touching, you’re able to stimulate a part of Asuka’s brain that seems to take her away to another time or place, a time where the two of you are in different scenarios, rather than simply being at school. Maybe you’re cooling down after a great volleyball practice. Maybe you’ve been caught in the rain and need to dry off together, quickly. Or maybe she’s just an incredibly nervous idol who needs a little reassurance before getting onto the stage. In all cases, Asuka needs your touch and guidance to get focused, and, with every rub, squeeze and slap (yea, slap), she finds herself falling deeper and deeper in love with you, until she can’t contain her hidden emotions anymore.

If that last paragraph sounded weird, it’s because it is, and it works out marvelously well as a result. Basically, the game is divided into three sections for the main Reflexion gameplay. First, you hold Asuka’s hands, which is done through pressure point sensation and rubbing with either the joystick buttons or the ZR/ZL buttons. Eventually you’ll happen upon the right spot (Asuka will give you vocal cues) to start her heart racing, and suddenly she’ll drift away into a very realistic daydream, where she’s wearing something entirely different and you’re there with her. From here, you begin to touch her in variety of ways, from simply squeezing her hand and rubbing her arms and shoulders to straight up honking her boobs and slapping her ass. If you’ve played even a little and can’t figure out how to get to her ass, make sure to turn on water gun mode so that you can spin her around, then switch back to intimate touching. You’ll have two handfuls of Ass-uka in no time flat! I’m not proud of that line, but here we are. 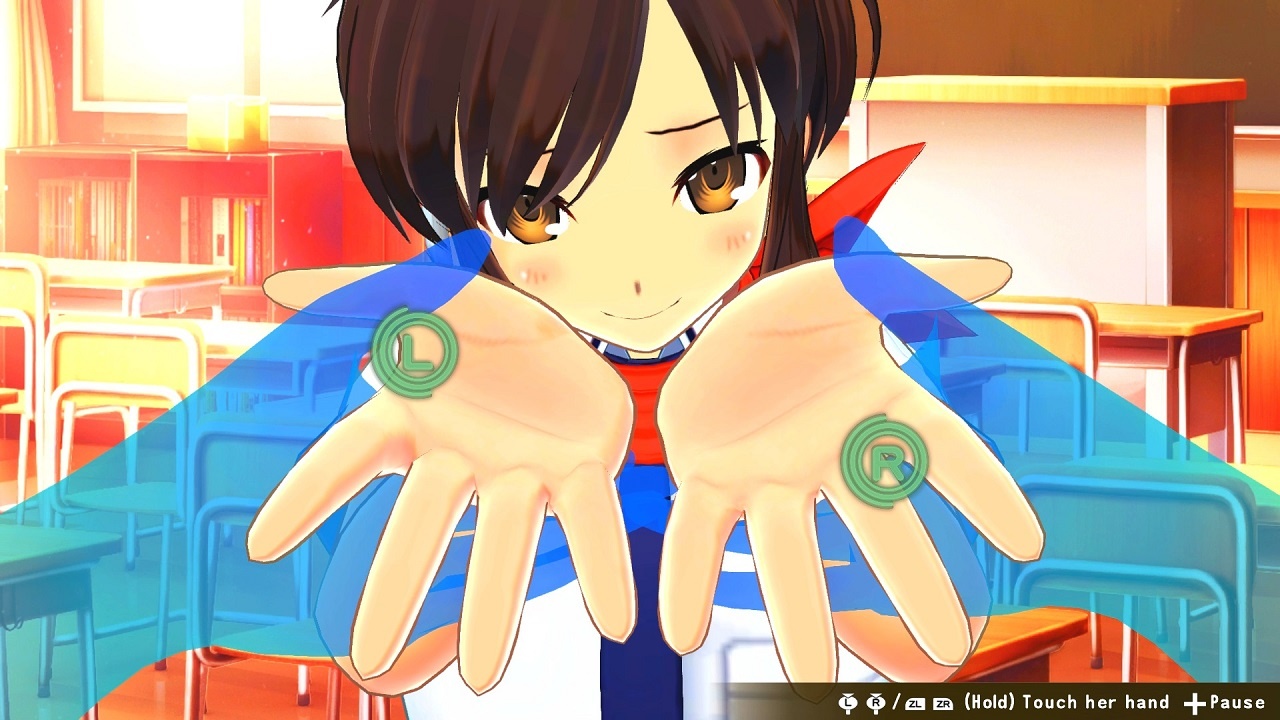 After you successfully get her worked up enough, Senran Kagura: Relfexions begins a mini game of sorts to see if you can really work her up in the right way in a limited amount of time. At first, these one minute special massages only allow you to use your hands to rapidly pummel her inner thigh until she’s overcome with pleasure (or time runs out). But, as you get better at the game, you can unlock other tools to help her, from a hairbrush (brushing her arms is a thing, I guess) to a muscle roller to a…personal massager. It’s at this time that I have to remind everyone, even those grabbing their pitchforks (I told you to stop reading!) that this game, yes, is rated M, but there is zero official nudity or sex in this game. You have a damn sight close for some of those costumes. Asuka literally wears a ribbon and nothing else at one point. You get a really good idea of those breasts and her ass, but nothing is ever fully exposed, and, interestingly, there’s plenty of insistence that Asuka never touches you back. This is something where the full degree of horny activity is ultimately left in the hands of the player, not the game. This isn’t a harem dating sim: this is a very specifically odd dating simulator.

The most disappointing thing about the game is that the HD rumble and motion controls, which I feel are the main attraction of this game (especially given how it was advertised in CMs) is nothing particularly special or interesting. It’s exciting to feel Asuka’s heart start to race when you find the right spot on her hand, and there’s a bit of feedback that almost gives her fingers weight, but there’s nothing as outlandish as having sensory overall when you grab at her breast or rub her leg. It’s insane that people would think this would be possible in the game given the physical limitations of the Joycons, but there was trumpeting everywhere that Reflexions would be the ultimate touching simulator, and that’s straight up not true. In addition, when it comes to rubbing down the girl or girls, the whole thing feels weirdly like a broken rhythm game. You can touch her wrong and get a negative reaction, but it won’t end the reflexion whatsoever, and you can easily recover and keep going to another part of the body. Most of the time I just flapped around wildly, rubbing her head and poking her stomach until she was somehow overcome with desire. It’s truly bizarre.

Additionally, there are some scenarios that will sincerely put people off if it’s not in their fetish wheelhouse. Asuka as a classmate caught in the rain, alright, cool. Asuka as a private tutor who wants you to rub her shoulders, kind of strange but no problem, it works. Asuka as your jealous younger sister. FULL STOP. I get that it’s a Japanese thing that’s deeply, deeply rooted in the odd levels of sexuality that float around the country, but really? I don’t remember giving my little sister deep tissue massages when I was growing up and then have her teasingly remind me that I can’t give other girls massages because I belong to her. Hey, if that’s your thing, awesome, go with God or whatever and just enjoy that without committing crimes. But if you’re not into it, it really catches you off guard in a big way. 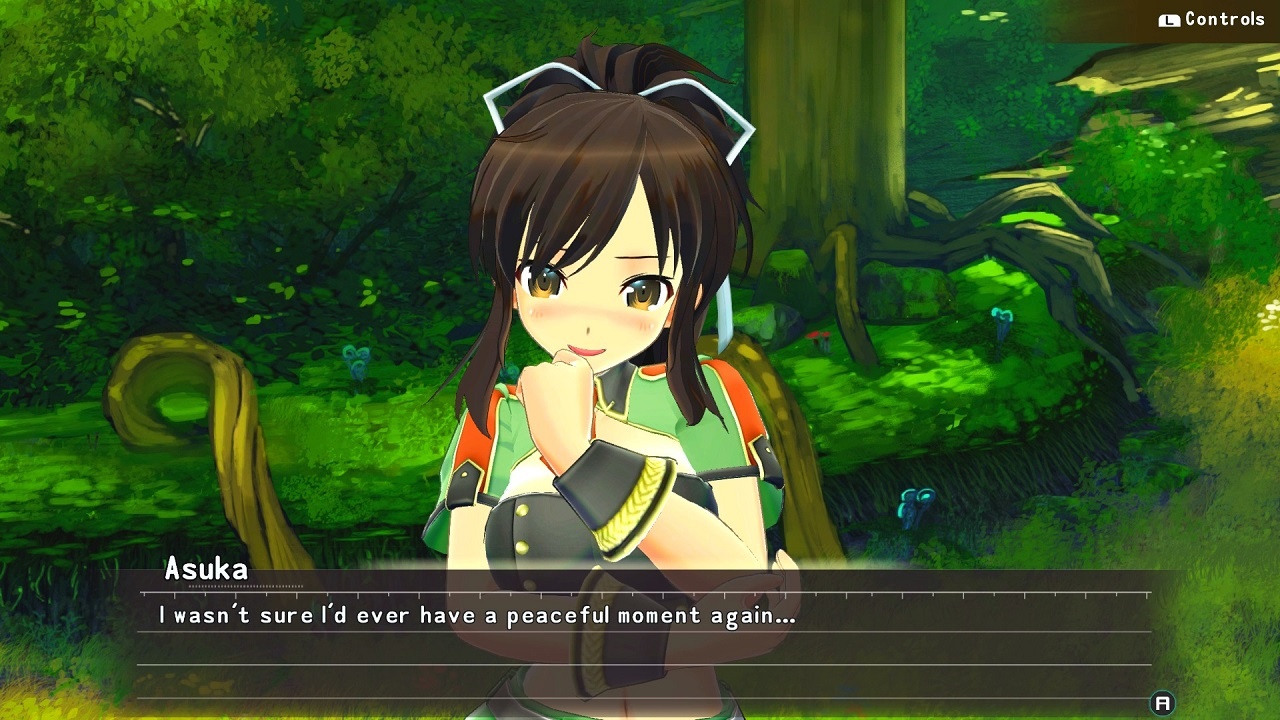 After you “win the game” the first time, you can go back and continue working towards unlocking all of the extras in the game, which include a huge variety of outfits, accessories, hair styles and even music. Oh, and her underwear: you get to choose what color, style and pattern she’s wearing under that skirt/dress/ribbon, and there’s a huge number of choices. The first win gives you the ability to see what scenario you’re about to trigger as you rub Asuka’s hands in the right place, giving a really interesting insight to the mapping of the digits and how things pan out according to the game’s placement of pressure points. Moreover, if you don’t want to go through all that, there’s plenty of opportunities to engage in “Mini Reflexions” where you just play around in the classroom in whatever style you want (I recommend goatee and demon tail on a nun outfit) or to simply pose her however you’d like in a variety of scenarios. The game wants you to enjoy yourself, and, simply put, if you are even a little into the anime chick scene then this is a pretty damn good cup of tea.

Lastly, it must be said that the voice acting for Senran Kagura: Relfexions is spot on. Though I didn’t get a chance to hear all the girls (because only Yumi is available and that DLC is goddamn expensive, yo) the way that Asuka runs through a variety of emotions and ideas as she floats through settings is quite good. You can really hear her move from hesitant and demure to emboldened and exposed by the end of your gauge session. Depending on the dream cases that you see and how well you do in the final massage, you might get a friendly but still confused Asuka who wants to see where the future leads to something much more intimate and almost flattering. Having Asuka confess her love after just holding your hands in class seems dramatic, but hey, it’s anime: we all want a great love story at the end of the day. Even if that came as a result of helping a warrior woman not turn to stone by furiously rubbing her stomach and groping her thighs.

If you’re a fan of Senran Kagura: Relfexions and you think that Asuka is the best girl, this is a no brainer in any scenario. The price is surprisingly low for this level of animation, voice acting and artistry, and you can live out your wildest fantasies of one-sided affection towards a huge breasted ninja who also goes to high school. If you prefer one of the other girls, you may want to wait until they allow you to buy those separately: the price really adds up, and I hope we maybe see a physical release with all the DLC and some bonus merc (Switch case?) by the end of next year. If you are horrified by the idea of groping a girl until you figure out how to properly roller her ass and spray her with water as she wears a set of cat ears and a bathing suit, then you probably should have listened the first time and not read this review. Senran Kagura: Reflexions isn’t going to create new fans, but it’s definitely going to make existing ones very, very happy.

Senran Kagura: Reflexions finally drops all pretense and let’s players interact with the cast the way they’ve always wanted to: one handhold at a time.