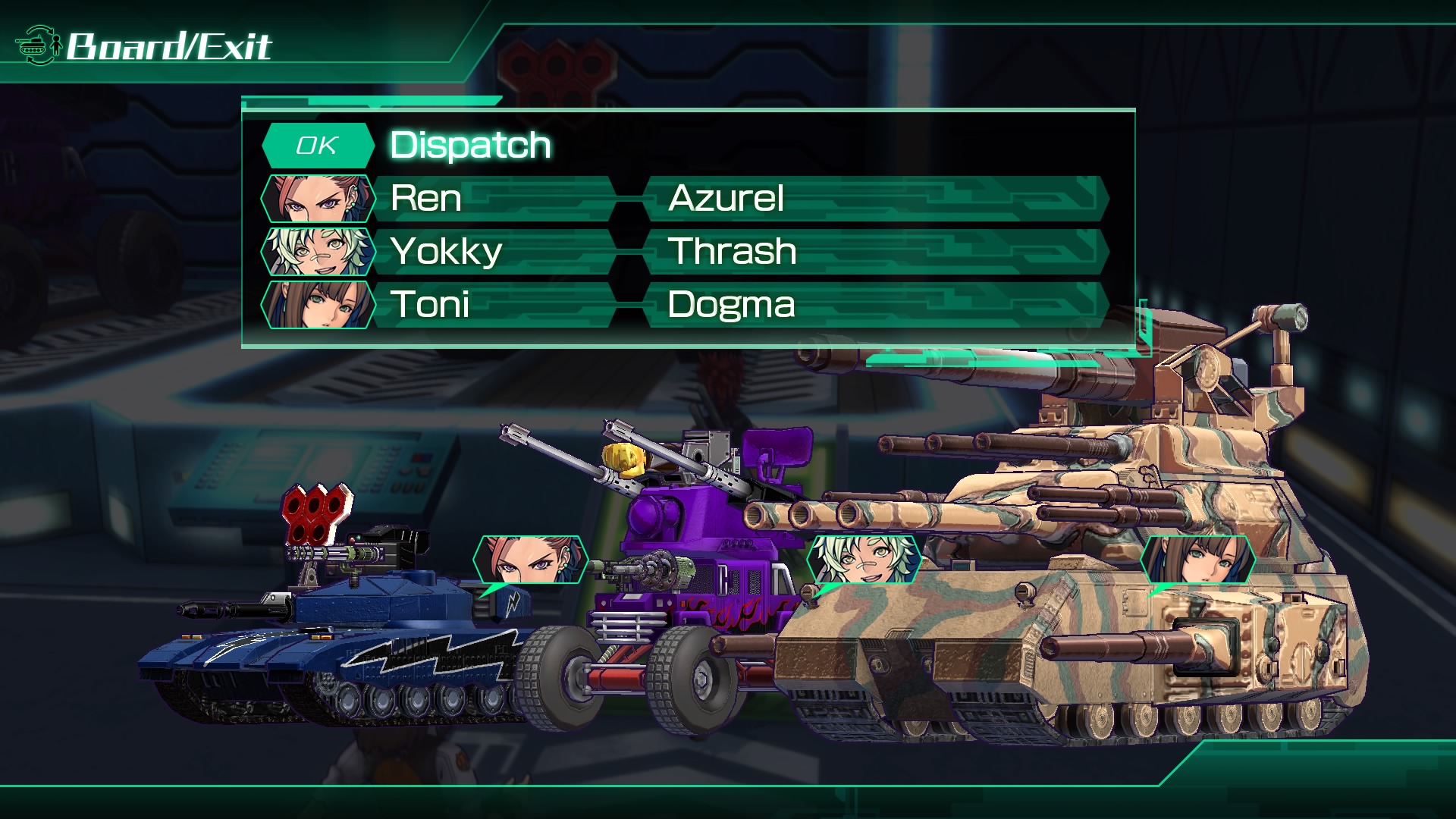 In Metal Max Xeno, you take control of Talis (or whatever you decide to name him) and a host of tanks in a post-apocalyptic world where humanity is on the brink of extinction. The game is set in a place called Distokio, the monster-ridden desert remains of a place once called Tokio. It is overrun by animal-machine hybrid monsters that resulted when the machines that humanity created to combat environmental issues decided that Man was the greatest threat to the planet. I personally love this sort of “what-if?” scenario where it’s a somewhat feasible future if humanity doesn’t clean up its act.

Your mission–your personal vendetta, really–is to eradicate these monsters, particularly the dangerous ones known as SoNs. SoNs have bounties on their heads placed by humanity’s final bastion, the Iron Base, which is home to the world’s only known survivors as well as a host of military secrets. In order to gain their favour and therefore their support on the battlefield, you must decrease humanity’s extinction index by discovering more survivors and taking down wanted monsters, which will net you a reward. Your most crucial tool and ally while wandering the wasteland is your tank. You’ll find several along the course of your journey and they can be customized to suit your tastes and playstyle.

Typical to the RPG genre, party management is a large part of your time spent between battles. It can be done from the main menu at any time outside of combat and you can outfit both your tanks and your human party members.

Equipping tanks consists of the swapping armaments, which are broken up into three categories: special, cannon, and machine gun. You can find armaments in containers and they are also dropped after battle, but you can make more powerful ones in the garage using raw parts. Equipment is limited by the tank’s weight limit. Weighing down your tank means it won’t have as large as shield during battle and will also limit their damage output. You can also paint your tanks. Each tank is divided into sections which can be painted and you can choose your shade from a selection of pre-set colours. Your final option and perhaps the most useful for making your tank your own is modifying. Modifying tanks allows you to strengthen individual parts as well as add-on additional types of armaments to your arsenal. Modifying tanks changes their appearance, which is nice, but it also makes it so that you can play the way you want. Do you use more cannons than anything? There’s a modification for that. Are special weapons your bread and butter? Add on as many as the weight limit will allow! 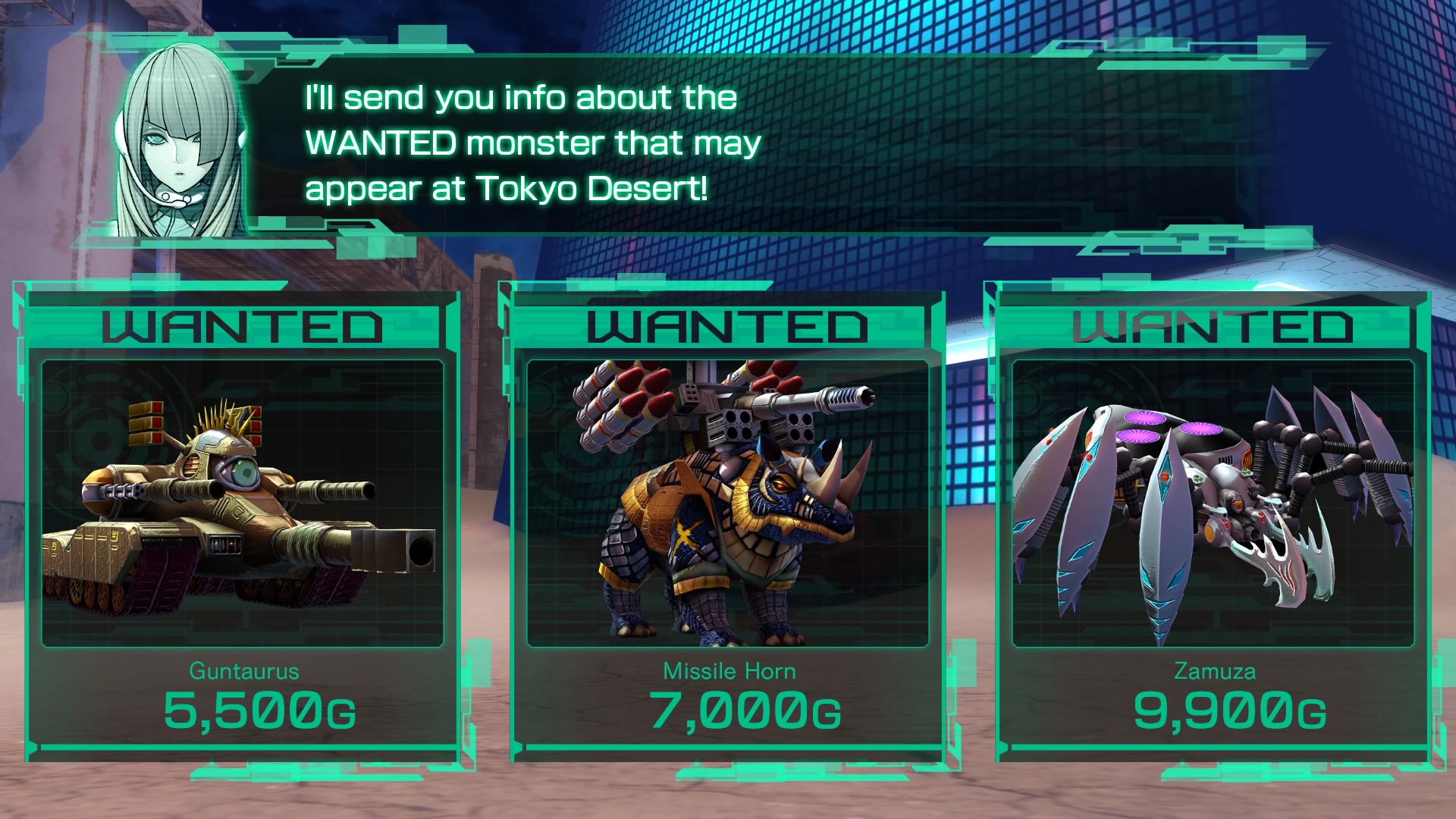 Your human characters, on the other hand, will gain experience from each battle, level up, and learn new skills based on their job class. Job classes can be changed in the Iron Base once you unlock the ability. Though jobs decide what skills your characters will learn and also what style of combat they’re better suited to, you can mix and match skills learned from past jobs. This gives you a bit of wiggle room as far as character development goes and also makes it so that you’ll be able to face tougher monsters with minimal casualties. There’s also the ACE point system, which rewards you with points for completing specific in-game tasks. These points can be assigned to different bonus stats like speed or HP and more complex ones that will strengthen elemental affinities. Unfortunately, the game doesn’t do a great job of telling you what each stat actually affects, so it’s sometimes difficult to tell whether you want to invest your hard-earned ACE points.

The majority of the game is spent exploring the remains of Distokio and looking for survivors. As you complete story quests, you’ll discover new locations and Bester Points, which function as the game’s fast travel, and also new tanks. Driving across the desert is somewhat uneventful, though you’ll sometimes come across treasure crates and buried items, which can be obtained up by interacting with them. Narrow and enclosed areas must be tackled on foot. Battles appear randomly and somewhat frequently and you can get the drop on an enemy by entering fire mode and attacking first.

Combat is turn-based and the combatant with the highest speed goes first. During your turn, you’re able to select which weapon to attack with and by holding down R1, you can see what the enemy is weak against in terms of elements. There are four in all: ice, shock, sound, and fire. Some armaments have limited ammo while others are unlimited, so keep that in mind when you’re outfitting your tanks. If your character is mounted on a tank, you can swap between using a human attacker or a tank attacker, though I’m not sure why you’d use the former as your humans are so much squishier and can be slain in a single strike. Some skills are tied to whether you’re mounted on a tank or not.

Because your tank has a shield, combat feels a little too easy for the most part. The enemy can whale on you for a good while without any real drawback. Sure, they can damage/destroy your weapons and chassis, but a trip back to Iron Base (made easy by the fast travel) will make you right as rain. Getting wiped out has no consequences, in any case, so there’s nothing to fear should you face off against a strong opponent. The enemy also has no health bar, which isn’t an issue in and of itself, except sometimes I’d kill a wanted monster way before I expected to given how the game builds up their terrible strength and the fight felt anticlimactic as a result.

The developer, Kadokawa Games and the publisher Nippon Ichi Software, are known to utilize a beautiful anime art style and Metal Max Xeno is of no exception. The main story cutscenes are fully voice-acted in Japanese with English text and the accompanying background music is suitable, but not download worthy. There are also some small errors in the text as far as the translation goes where the literal translation from Japanese to English doesn’t quite make sense. The game as a whole isn’t particularly nice to look at, though that’s partially because the post-apocalyptic setting is meant to be bland. Between the gray of ruined underground facilities and the beige of the desert, there’s not much to look at beyond the colourful hull of your tank. The graphical fidelity doesn’t exactly test the PS4’s limits either and some of the textures are muddy, appearing more like a HD remake than something that was released recently.

Good, not great. Metal Max Xeno lacks the flashy attack animations and cutscenes modern day JRPGs usually employ and the cast and script are rife with Japanese stereotypes. Its main mechanic, the tanks, is also one of its greatest flaws as driving around the game’s barren locations is less than engaging. Still, being able to design your own tank is an unusual game mechanic and offers those of us who enjoy Gundam and the like an enjoyable customization experience that significantly alters the way your tank handles inside and outside of combat. There’s room for improvement, but for those who are familiar with NIS and Kadokawa Games, you’re in for a good time. Those who aren’t well versed in RPGs may want to hold off for a sale.

Your mission–your personal vendetta, really–is to destroy the monsters who destroyed your world. May the tank be with you.