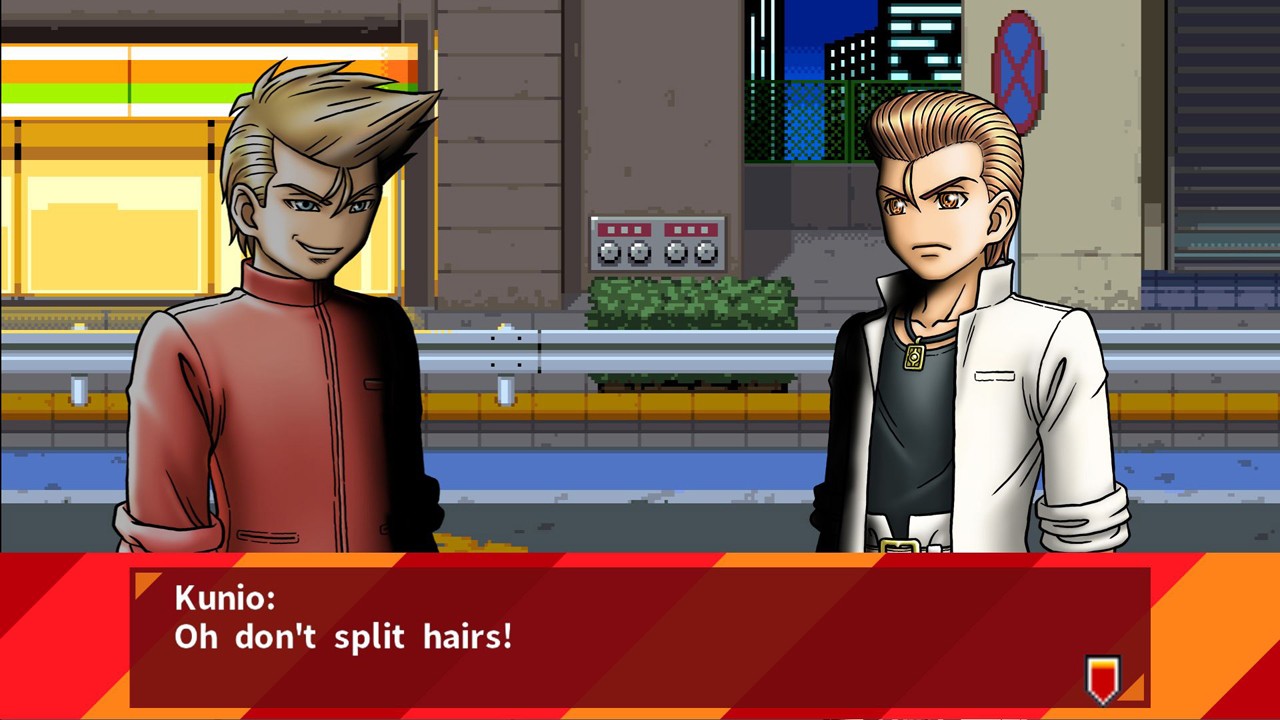 The character of Kunio-Kun is an interesting one because of the ebb and flow of his history in the Western perspective. For many people, they saw him in the classic NES brawler River City Ransom, and then just saw characters who sort of looked like him for the next couple decades. That’s because Nintendo really didn’t care if you knew the same guy who fought dudes down by the river are the same guys now involved in dodgeball tournaments, or soccer matches, or even a Double Dragon game that wasn’t originally a Double Dragon game. It’s a wild ride, but, at least under the leash of Arc System Works, it appears there’s a genuine effort to bring together the ideas under one roof. With Stay Cool, Kobayashi-san! A River City Ransom Story, we see an attempt to keep the story moving forward, if not exactly in the direction we considered, at least with some momentum. However, like the path to Hell is paved with good intentions, Stay Cool had a lot of ambition and great ideas that were ultimately hamstrung by their own performance.

Like you may have gleaned from the title, this River City Ransom story has a lot less to do with the main Kunio-Kun and a lot more to do with Masao Kobayashi, a minor character from the original River City Ransom who also popped up in Crash n’ the Boys (and had totally different names in each version because localization likes to spite the creators). Somehow, there was this great idea that Kobayashi needed his own spinoff game, but there wasn’t really a lot of forethought put into how this was going to be done. Instead, you, the player, create a character, who can be literally anyone (the game defaults to Catherine) and it can be a romantic or friendship connection for Kobayashi-San. This character you create has been kidnapped, and you need to go out and fight the evil leaders of some unknown gang to get this character back. Also, it’s expressly stated, throughout the playthrough and various dialogues, that kidnapping Catherine isn’t the real criminal plan, and there’s something else going on, but you aren’t privy to what that is until you play through the game a couple of times. Seriously. You gotta defeat 30 (!) different Evil Organization members using either yourself and an NPC helper or a second player, and it’s a CHORE. 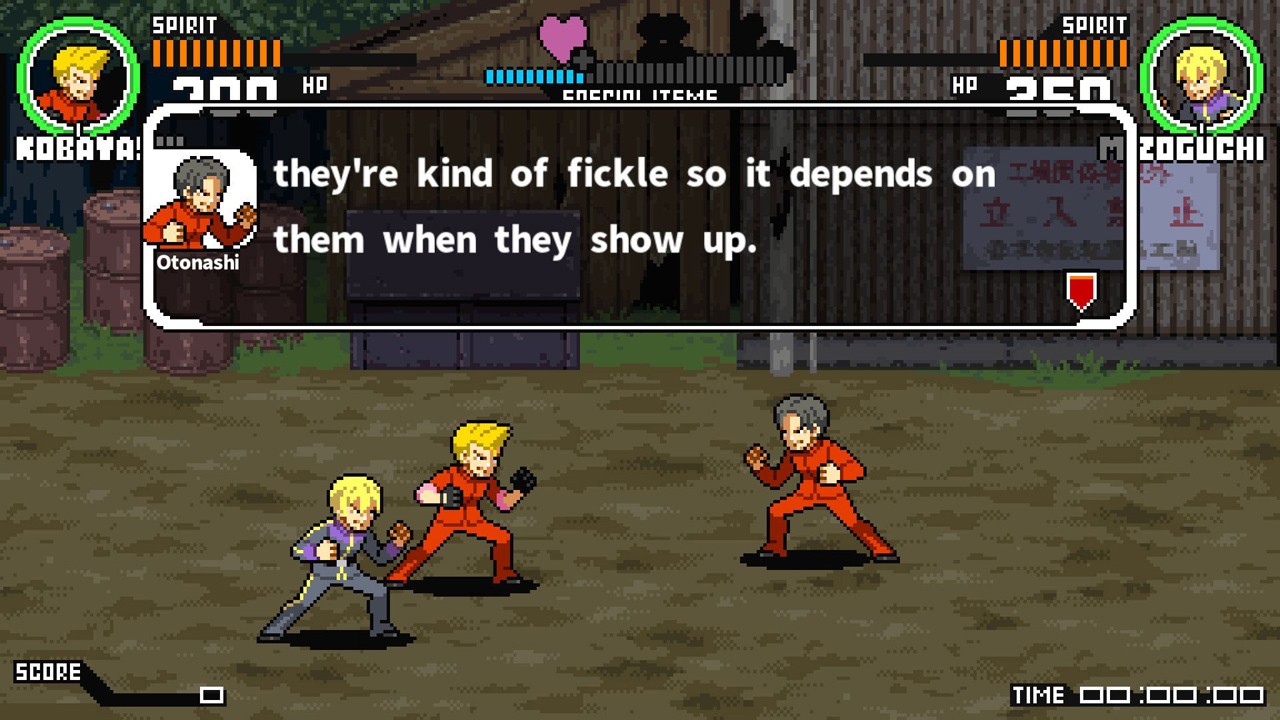 First, the good. Stay Cool, Kobayashi-San looks pretty damn good and sounds exceptionally good. There’s never been an issue with the soundtracks of Kunio-Kun games, but this title does a wonderful job of delivering some nostalgic ambience that puts you right back in that brawler mindset, with some of the pop and rock beats that keep you moving forward. The spritework is utilizing a more modern approach to the game, so things aren’t quite as chunky as they were back in the NES days but still is reminiscent of how it all used to be. You can see a very clear difference in the well structured heroes, the cavalcade of villains, and the bosses themselves stand out quite a bit. This is on top of the fact that everyone who matters is voiced, and the voicework is, and I mean this strongly, superb. The voicework is so good that I’m realizing that I would 100% watch a Kunio-Kun anime or movie, and I want that to happen as soon as someone realizes how to make this transition to the big screen. The good deliveries vocally help to distract from some issues with the typesetting and random missing punctuation in the dialogue boxes that starts almost immediately and continues throughout the game. If you’re bothered by weirdly phrases lines or sentences that are clearly missing important things, step away from the console, you’ll get angry.

Then we have to get into the game itself. There’s no straightforward way to complete Stay Cool, Kobayashi-San, but there are some easy to follow ideas. First, you gotta beat up a lot of dudes. And I mean a lot. Thirty bosses is nothing to sneeze at, and they all have different approaches to keep in mind, from uberpowerful onslaughts to sending waves of minions to do their dirty work for them. You can basically go any direction, into different buildings and structures, trying to figure out where things are hiding and where other NPCs might appear to give you guidance or taunt you (sadly, only a couple join you in the fight). You won’t be picking up weapons, so you need to focus on the two attack buttons you have, plus jumping and dashing. There’s your main attack, which is usually a kick that can be combo’d with multiple button pushing, and a charging attack that feeds off of a meter near your health. The charging lets you do an instant attack of different strength (depending on how high the meter gets) and you refill the meter just over time. That’s all. Just wait it out.

Frankly, the combat of Stay Cool Kobayashi-San is freaking boring. You just run and kick people, and you kick people, and maybe you can charge up to punch people, but mostly you just kick people. You can’t kick them on the ground, so don’t bother waiting around once they fall. You can attack in midair, but it’s hard, if not impossible, to get a juggling going. There are items, but none of them are weapons, just occasional heals and some bombs that will hurt you as much as you hurt them. You can switch between being Kobayashi or one of his cohorts, and that at least adds a bit of spice to things. However, if either of you suffers too much damage, it’s a game over and a teleport back to the previous save point, which may or may not have been recent, because cats are evil. 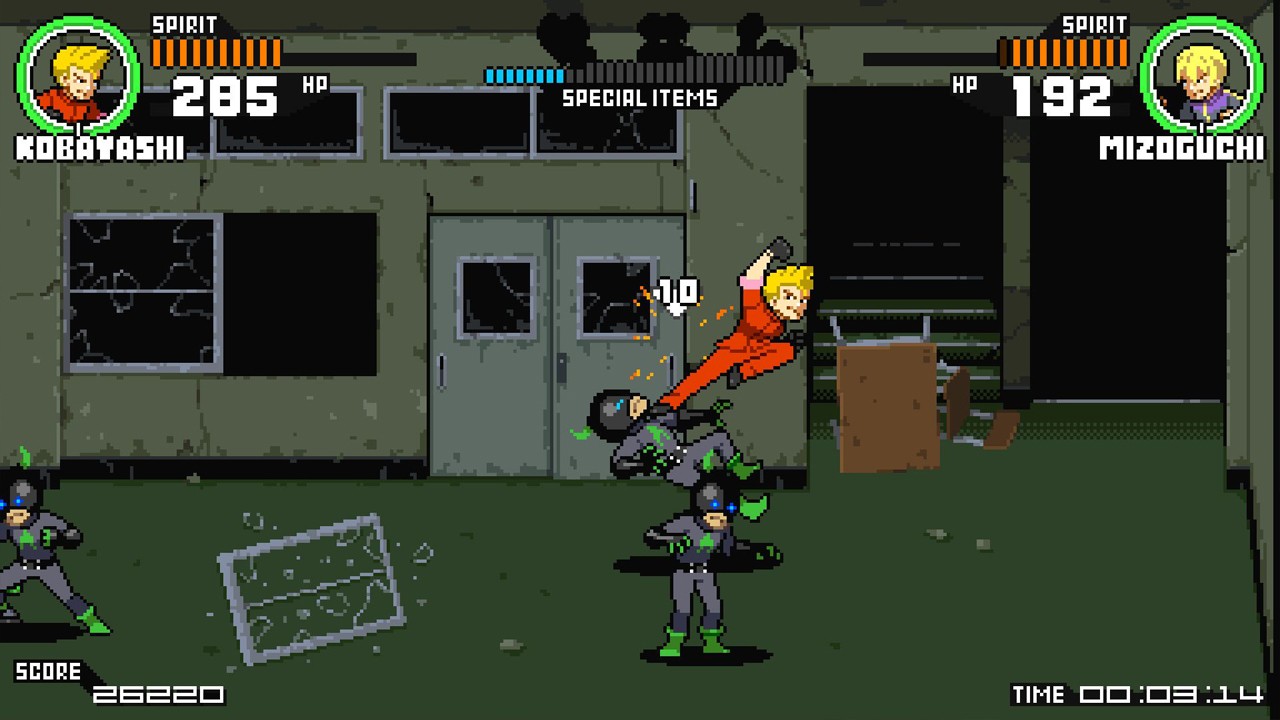 I get the joke and the fun of having save points being robotic cats, and having cats be fickle (sometimes they’ll let you save, sometimes they won’t), but it’s a stressful, arduous approach. You already know that you have to play through the game a few times in order to actually get the real ending. You buffer those times inbetween by improving or unlocking skills for your fighters, which doesn’t actually change how most of the combat goes, just adds variation to your one button mash. You hope you have a friend to come along with you, but, if you do go at it alone, know that the NPC is fairly competent with their AI and you can trust them to hold their own. But you go screen after screen, dealing with insane things like tears in reality and apparently non-corporeal beings that you can only hit with special attacks, and then you’ve got these goddamn cats who might not feel like letting you save. Do you know how much it sucks the fun out of a game when you play it for several screens and get kicked back to thirty minutes ago because a boss did a cheap shot and the last save cat wasn’t in the mood? It put me in a right foul mood, and here we are.

This is one of those challenge games where I think people will be attempting to run it with a friend or solo in time trials in the future. There’s a bit of demand here, which is insane since there isn’t a lot going on, but the ask is high. Stay Cool Kobayashi-San actually asks the player to care about a minor character from a game two decades ago, make them the main, fabricate a storyline that’s totally insane, really focus on trying to find the three items your character cares about (hidden somewhere in the game on or around bosses), and do it all by being patient and cunning with single button fighting. I like the characters, I like the premise, I really did not enjoy the execution, and I feel like it could have been done better. Kunio-Kun has had many adventures, and we’ve seen his world do just fine without him (River City Girls was a banger!). But this? It looks like Kobayashi-San might be losing his cool pretty damn fast.

Remember: you can do a sequel without the main character, but you have to do it WELL.