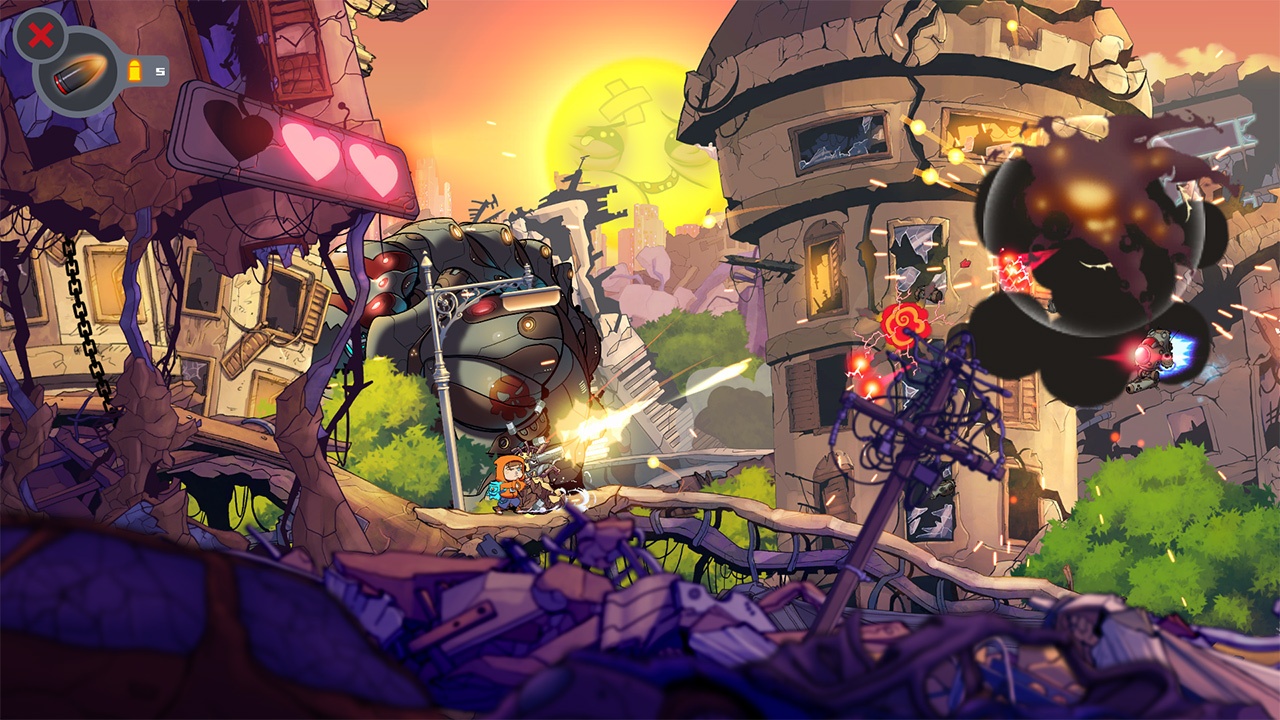 There was so much in the favor of Rise and Shine from the moment I picked it up. Firstly, it’s an Adult Swim Games publication: those folk really know how to choose some fun, if strange, titles. Secondly, any medium that is mired in references to other video games usually gets a big perk out of me, from things like Old School Musical to more “subtle” items like Ready Player One. Lastly, the concept really appealed to me in general, since putting guns, explosions, an M rating and those style of cartoonish, beautiful graphics together stirs a big, promising hope in my heart. Sadly, it doesn’t seem like fate was in favor of these ingredients, and, instead of a delicious banquet, you end up with a disjointed, bland and, frankly, infuriating buffet.

Rise is the name of our hero, a little dude who lives on Gamearth, where a whole bunch of classic video game characters live and exist in perfect harmony. It should be noted that the fantastically named Super Awesome Hyper Dimensional Mega Team took careful steps in making sure the characters you see are recognizable by sight, sound and background moves, but no one is directly named, so lawyers can relax! Anyways, one day the planet is invaded by the Space Grunts, who represent the war-mongering planet of Nexgen.  If this is all a little too on the nose, just try and take a deep breath while moving forward. Anyways, the Legendary Hero of the planet is almost immediately gunned down in a hail of bullets, and he gives his dope gun, a talking multi-pistol named Shine, to Rise in order to carry out the rescuing of the whole planet. As long as he’s carrying Shine, Rise cannot be killed: he’ll die, sure, but he’ll respawn close by, ready to try the whole thing again. Why wasn’t the Legendary Hero protected, then? Shut up.

Rise and Shine is a nifty little platformer/side scroller where the objective is to carefully, crazily get to the end of each level, eventually facing off against a giant boss to signify the division of the worlds into the next leg of the game. Rise isn’t a particularly fast protagonist, but he does well enough. He uses Shine to solve all his problems, even jumping: a bullet fires off every time he jumps to propel him considerably higher than the average waif might jump.  Naturally, with all the baddies of Nexgen invading, Rise has gotta shoot them all to hell, which, in the case of robots, usually means some explosions and pretty sparks, and, in the case of meat bags, means giblets and heads rolling around. Rise does have the potential to make headshots in certain cases, so getting good at aiming and firing is important. 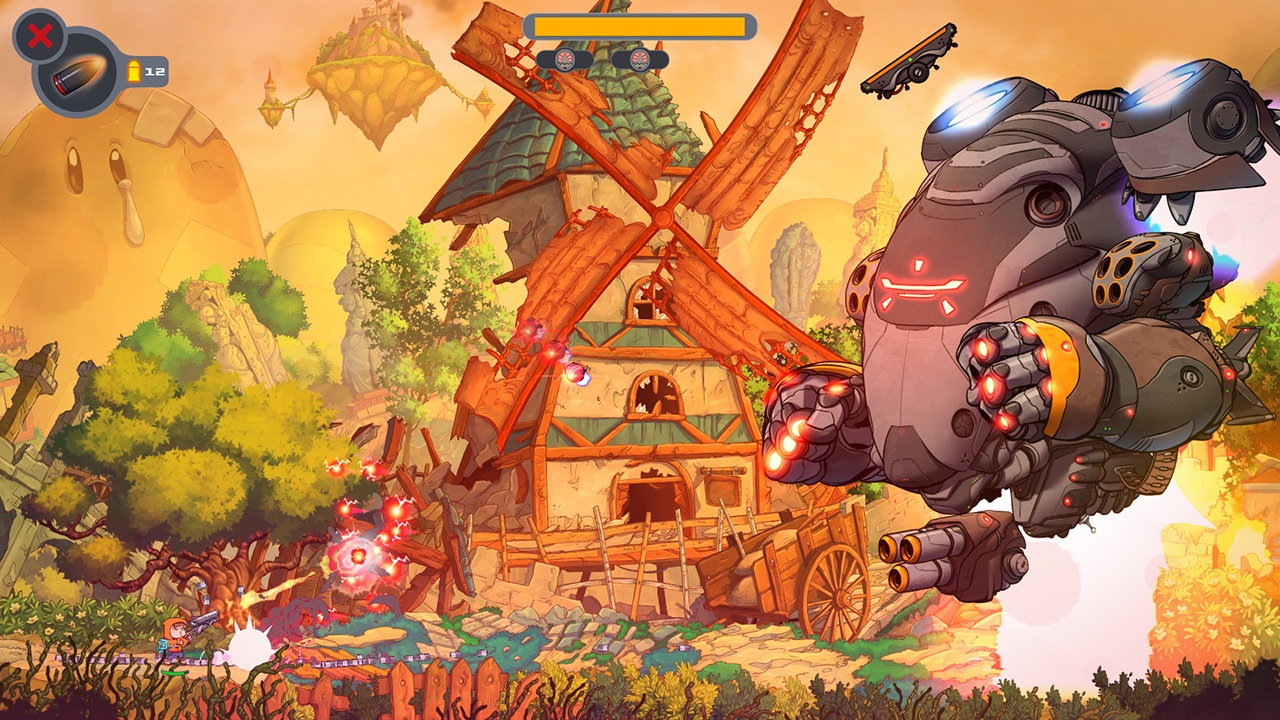 Along the way, Shine also gets augmented to have different kinds of bullets and upgrades. Besides adding more slots to your clip (which can hold a hilarious number of bullets before being reloaded if you’re careful), Shine also gets things like electrical bullets (great for dealing with certain robots), explosive bullets (for kabooming things that need to be fragmented) and the regular type, which can sometimes deal with robots or kabooming perfectly well on their own. Since Rise is distinctly a little kid, he can’t take too many hits before dying, and there are plenty of one-hit murders waiting in the wings. As a result, the game has this decent duck and cover mechanic, where there’ll be shelter to hide behind in some cases to keep you from getting bulleted to death. Hide, pop out, shoot whomever a few times over, and duck back down. Repeat until only ashes, heads and shattered circuitry exist. It has the potential to be fun, and interesting, if done well.

The problem for Rise and Shine, however, are the way that some controls and ideas are implemented. You have to hold down one button to draw your gun, aim with the right stick, and shoot with a third button. If you’re keeping score, not one of those buttons allows you to move, jump or do anything to keep your ass safe, so you need to really, really think about if you’re ready to shoot or not before getting into the shit. If you let go of the ZL button for a second, the moment is over, you don’t have Shine out anymore, and now you’re just a target in an orange hoodie. I get that, thanks to the pacing of bad guys spawning, you can’t make shooting too easy: if you could do it with just a couple buttons, heaven forbid, then Rise would bust through this already short game in an insultingly low amount of time. Even for the first run through, you’ll be able to get it in under three hours, and every subsequent run is guaranteed to be much shorter.

Graphically, Rise and Shine is bang up, and I love the art style of the game. Rise is a decent enough hero, cute but not overly attractive or magical, and there’s nothing about the game that screams I need to stare or look at anyone. Seeing character homages pop up on occasion is cool, and I like the fact that the Gears of War franchise is somehow the enemy, but Snake from Metal Gear Solid is just cooly chilling with the refugees of Gamearth.  The war torn landscape is a crazy juxtaposition of the bright colors of “classic” video games buried underneath rubble, debris and the occasional dead body. The way the bosses are sculpted have a great effect as well, making them seem big but not insurmountable. 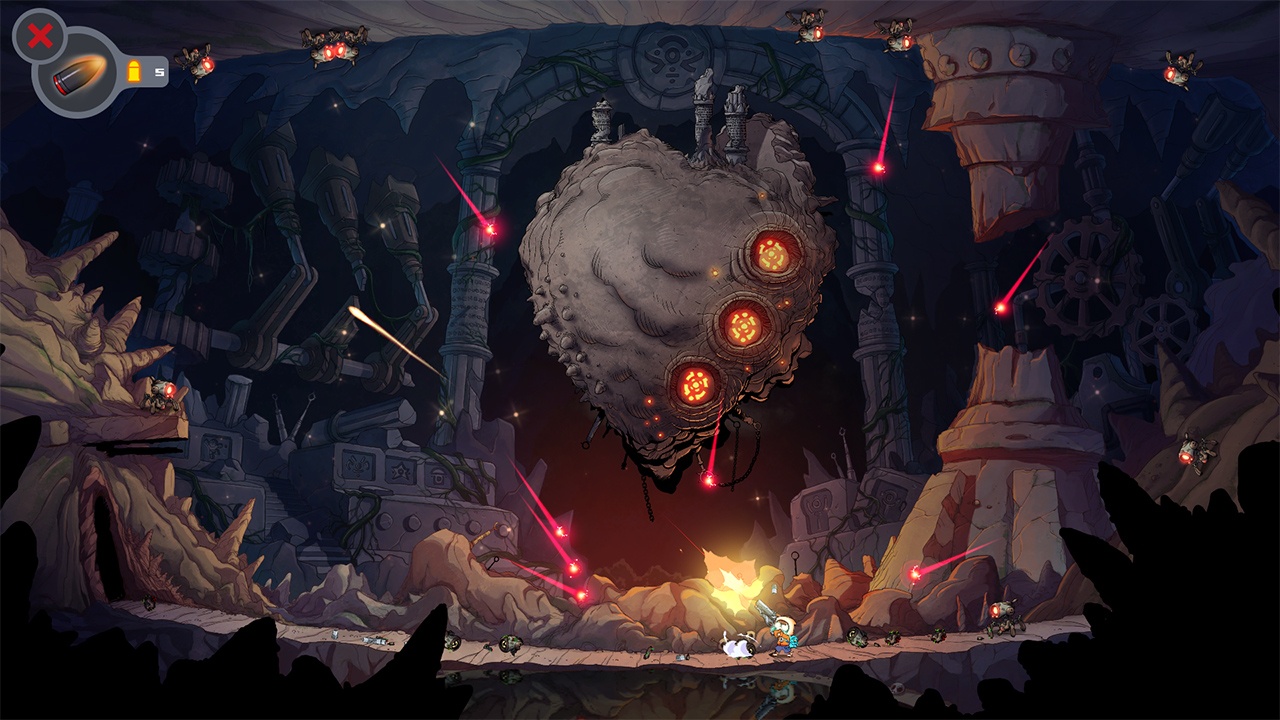 But it’s not about how the game looks, it’s about how it plays, and that’s really the rub for Rise and Shine. The controls are already a problem, as I’ve mentioned, but the game itself just has a lot of questionable and infuriating moments. Like the slow motion bullets, which are very important but also a huge pain. You have to navigate bullets through certain puzzles in order to progress, which makes NO sense as it totally throws off the pacing of the game. Additionally, there are bosses that need the slow motion bullets in order to “end” certain phases of their lives, and this just turns into another frustrating moment where you’ve swung drastically from “run around, shoot things and try to live!” to “alright, let’s try and thread the needle, careful, you can do it…” It’s like if the end of every Gran Turismo race asked the player to parallel park on a street in Back Bay on a Sunday.

The final nail for me is that the game just turns into a chore after a while, and that’s never a great feeling for any video game. Rise and Shine has all these elements of loving and applauding classic games, but nothing about it feels like a classic game. A bunch of weird meta humor, some oppressively heavy moments of gunfire where you can die almost instantly if you aren’t fully focused, and a ton of control issues that make my hands cramp up after playing for more than 15 minutes. There’s this whole segment where you’re suddenly shooting explosive baskets about halfway through the game, and it makes sense because exposition tells you it does, but it doesn’t make sense in playing the game. Honestly, it just felt like someone had a great idea, couldn’t explain to anyone why it was great, and then argued till they agreed to put it in.

Rise and Shine had so much potential and so much promise, and that’s what hurts the most. If there wasn’t a bunch of awesome promised from the very beginning, I’d probably have been more forgiving of the shortcomings overall. I did enjoy the ending, as it felt like it properly looked in upon itself and realized the best way to end things, but it was insane having to slog there in the first place. I’m not saying don’t give Rise and Shine a chance, but I am saying to consider it carefully if you have a backlog. If you really enjoy shooters like Metal Slug but would prefer it was more difficult from a technical angle, then you might really like this game. Don’t let the Gamearth setting fool you, though: this is definitely a title for the next generation.

If you really enjoy shooters like Metal Slug but would prefer it was more difficult from a technical angle, then you might really like this game.