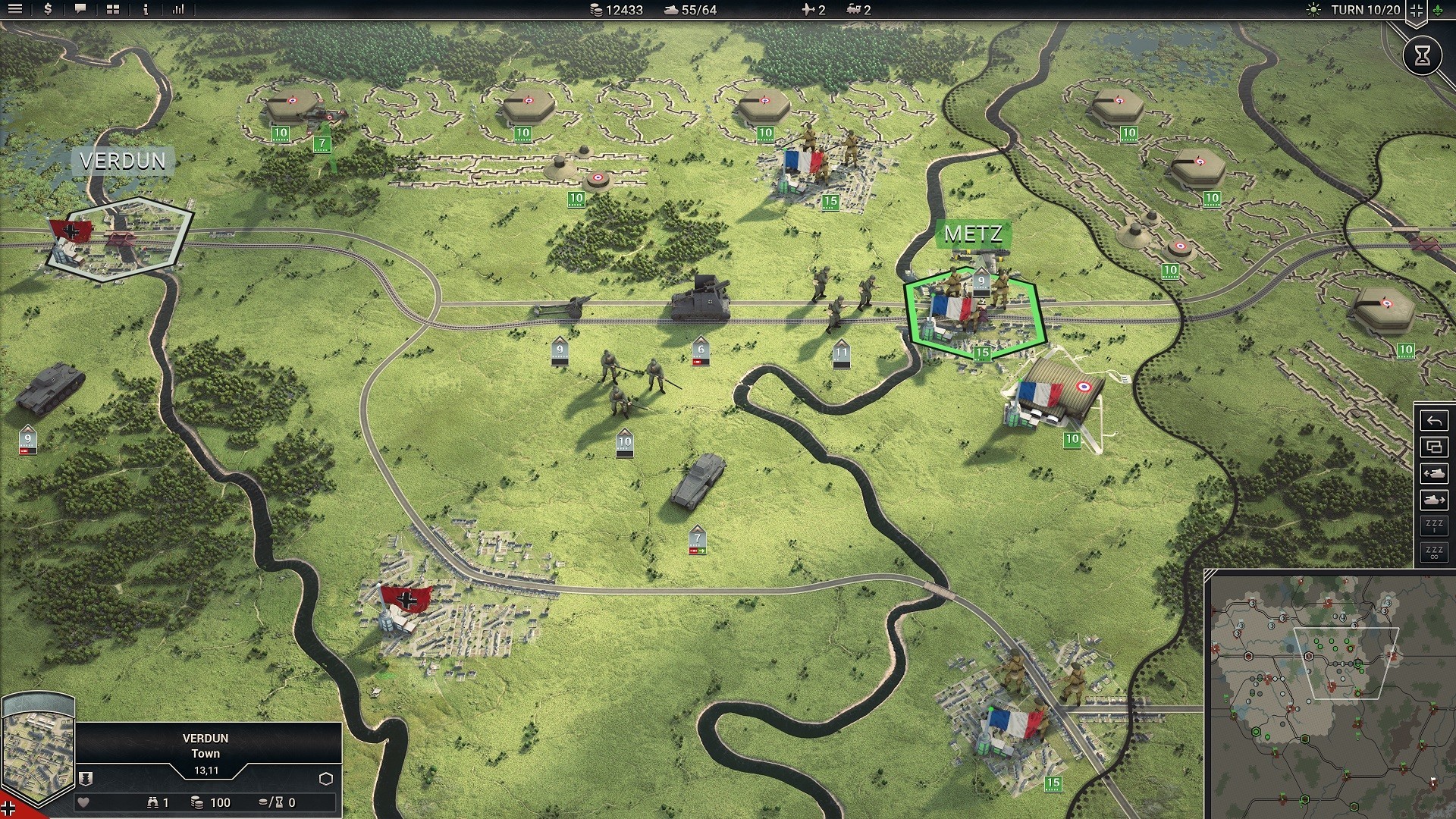 Panzer Corps 2 is a turn-based tactical wargame which should be no stranger to fans of the genre, given the high critical acclaim and reception that its predecessor received, and continued to receive in the years following its release, as the game gained multiple DLCs.

First and foremost, I have to admit that I have never played the original Panzer Corps game, nor games such as Order of Battle or Panzer General, nor anything of the sorts. I believe that the closest that I’ve gotten to play something like Panzer Corps would be a 4X game whose focus doesn’t really rely on combat, like the Endless Space and Civilization series. So, if you were hoping for this review to come from someone who played and enjoyed the original Panzer Corps, or who’s an expert in this game, you’ll be disappointed. This review is coming from the perspective of someone who has never played this kind of games before.

Besides the single-player component, there’s also hot-seat and online multiplayer, but I wasn’t able to test the multiplayer component. For solo players, Panzer Corps 2 a grand campaign consisting of five different stages of the Second World War, played from the Wehrmacht perspective, ranging all the way from the invasion of Poland in 1939, to the Barbarossa Campaign in 1941, and the defence of Italy in 1943. Furthermore, solo players also get two historical scenarios (Crete and Fall Weiss), and two fictional scenarios, with one putting you in charge of defending Berlin against random waves of enemies and the other one placing you in a Fjord War against the combined forces of the Allies.

All these options can be played from five different difficulty modes, and you even have access to advanced difficulty options such as Ironman Mode, turning on and off the fog of war and turn limitations, amongst a few others. There’s also a 6 scenario-long extensive tutorial that teaches you the basics of the game, and, if you’re new to the series like myself, I highly recommend you to play this first. Also, a cool feature present in the game, one which happens to add a lot of replayability, is the fact that in the campaign you can take different strategic approaches on each territory, like for example, you can choose to attack Poland from the North or the South, with the North being more open, while an invasion through the South will force you into more close-quarters combat. Obviously, depending on your choice, you’ll end up on a different map with different objectives. 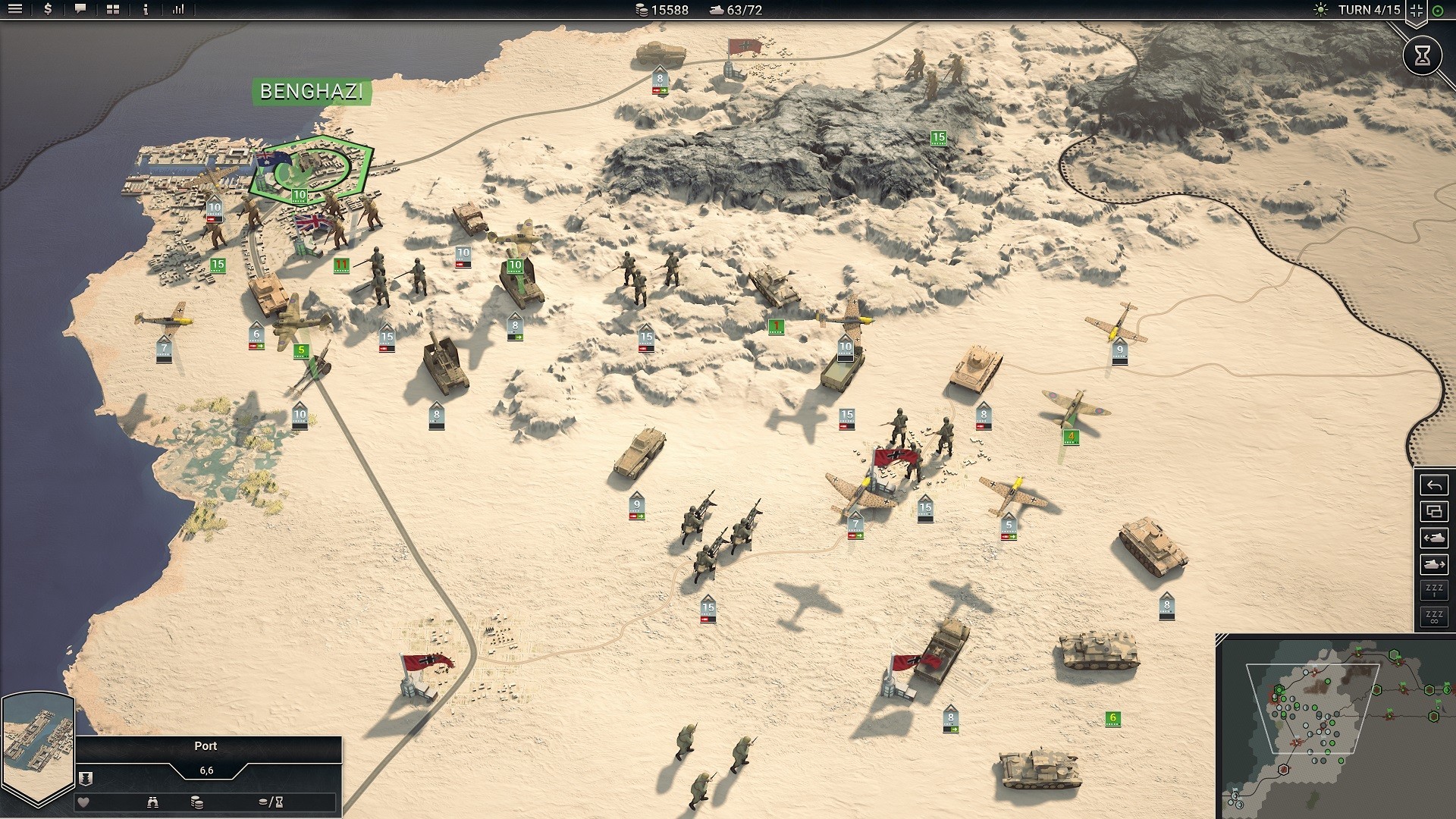 In each mission, you have to complete certain objectives like eliminating all enemy units or capturing specific locations, but you have a limited amount of turns to accomplish this. This adds an intense amount of pressure, as you’re constantly fighting a battle against the clock, trying to consolidate your limited resources so that you don’t waste them impulsively. At its core, Panzer Corps 2 is a pretty straight-up turn-based combat game, but thanks to its inheritance, there is a lot more to it, at least for someone who didn’t play the previous one.

The biggest gameplay aspect of Panzer Corps 2 is, undoubtedly, managing a force of a wide range of units from all sorts and types, ranging for infantry squads, to numerous tank models, artillery, aircraft, and naval units. This not only means knowing when, where, and what to deploy in order to face a specific enemy, but also managing your limited unit slots and your prestige, the game’s currency which not only allows you to acquire new units but also to upgrade them and repair/refill them. Knowing yourself, your enemy, and making use of the terrain is paramount to achieving victory. There’s a constant need to be able to adapt and mobilize your troops during the conflict, as one moment a tank can deliver a lot of damage to an infantry unit that finds itself in the open, but in the next turn, that unit could have had relocated to high ground or moved within a city, thus posing a much bigger threat to your tank than your tank to it. A lot of times you might also find yourself besieging a capture point and simply having to wait for your artillery to weaken the enemy positions so that you can then move in without having to deal with extraordinary defensive buffs that come from being entrenched in a spot for too long.

As I was playing through the campaign, the more Panzer Corps 2 started to remind me of Into the Breach. Both these games feature a turn-based combat system, and both these games offer a wide range of units that behave differently when facing distinct unit types. Furthermore, despite being aware of the fact that I was playing a wargame, the flow of the combat in Panzer Corps 2 almost made it feel like a puzzle game sometimes. Having to relocate different units throughout the maps to make sure that I was countering a certain enemy with the best unit that I had for the job felt like an intricate game of chess. With this in mind, I found my play sessions quickly derailing thanks to that “Just one more turn.” line of thought, as this quickly became “Just one more mission.” and next thing I knew, it was 3 in the morning.

Unlike most strategy games, this kind of war games like Panzer Corps 2 doesn’t make you start from scratch at every mission. Instead, the core forces of your armies persist throughout missions, while auxiliary units are only available in a single mission. These core units will gain experience and level up as they battle, so on top of everything else, the player also needs to be careful in order not to lose experienced units during a mission, because once units are gone, they’re gone for good. Now, when you combine that with the fact that you can only deploy a limited amount of units (better units will consume more slots), and also the fact that prestige is both used for repairing/healing units, upgrade them, and buy new ones, then you can have a real challenge on your hands if you happen to find yourself losing a lot of fights. 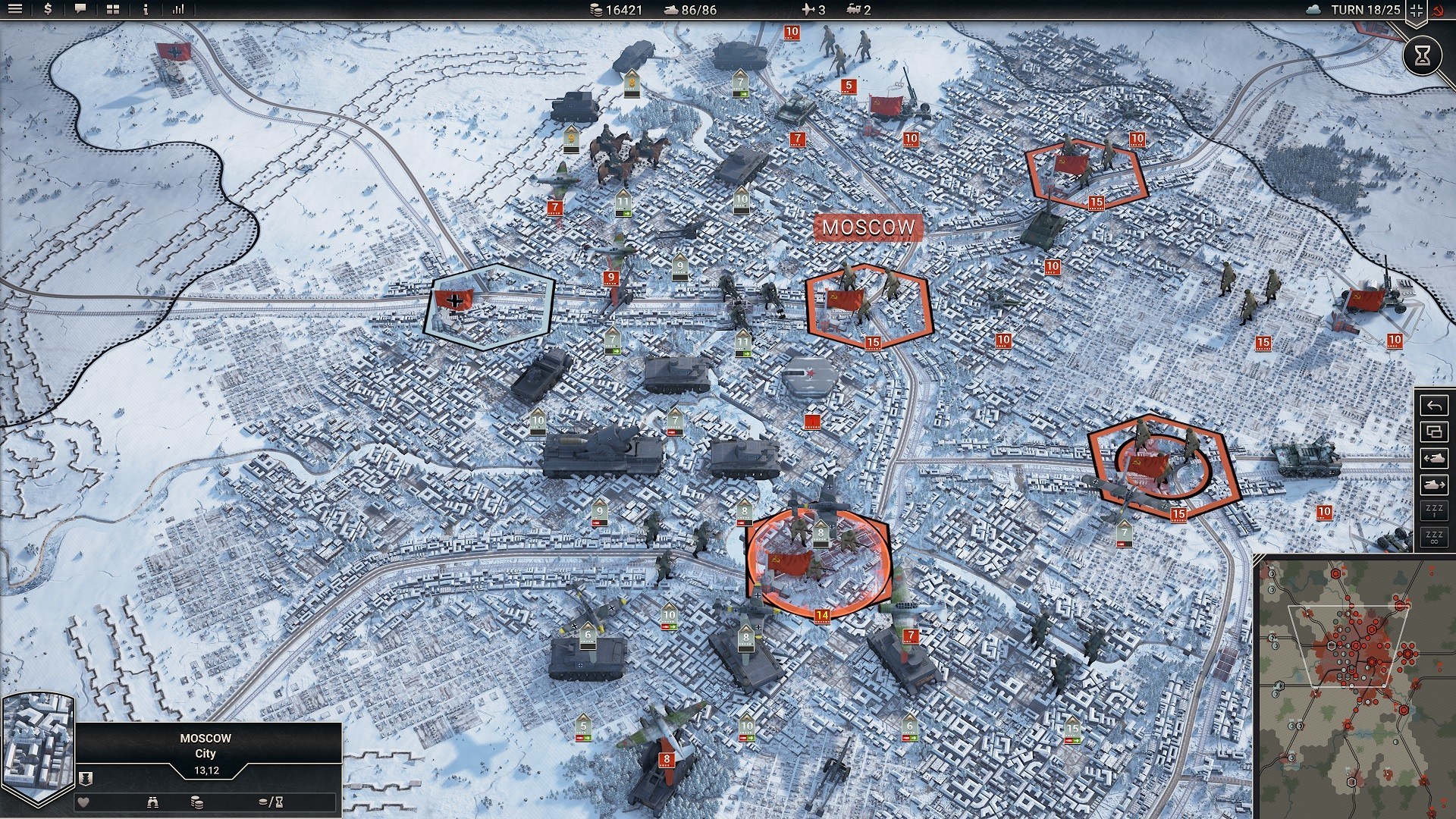 This might sound a bit intimidating, but this is done so that skirmishes are balanced, so that you can’t simply overrun enemies with your sheer numbers, and so that you have to sacrifice and plan what kind of force you want to deploy on each mission, as you try to achieve a balance between all types of units so that you’re well prepared to deal with any kind of confrontation. For instance, terrain plays a big role in Panzer Corps 2, as infantry is designed to fight in specific terrains such as hills, forests and towns, while tanks are designed for engagements in open terrain. Moreover, the high ground provides a huge advantage and is extremely costly to assault such a position, so it’s recommended to soften enemies first before moving in. Both of these examples should give you an idea of how important it is to not simply focus on just a few specific types of units, but instead, it’s best to have a diverse force that can face any challenge.

If there’s one thing that I still haven’t really figured out is if it actually works, if it’s broken, if it’s poorly implemented, or if I’m just completely missing the mark; that would be the encirclement mechanic. In theory, encirclement seems to be a cool mechanic which allows you to make enemy units vulnerable, by simply placing units around them, but unless you have every single hex around the enemy blocked, this system can feel like it doesn’t really work, as enemies simply escape the encircled zone.

If you’re a fan of the first Panzer Corps, then you should have a pretty good idea about what to expect here. It’s more Panzer Corps, tweaked in a few places, and visually upgraded. To me, it feels that Panzer Corps 2 ends up being welcoming to both casual and new players, as well as hardcore fans of the genre, thanks to various difficulty modes, advanced difficulty options, and all the different paths that you can take. The different strategic routes in the campaign and the modifiers that you can pick as strengths and weaknesses for your General at the beginning of the game, make room at least a second campaign playthrough if you want to experience as much as you can.

Now, do I think that Panzer Corps 2 is worth the asking price? Yes, I do, at least as long as you’re a die-hard fan of games with turn-based combat. There is more than enough content on the campaign alone to keep you busy for at least 40 hours, and then you also have the extra scenarios, multiplayer, and the scenario editor. Sure, Panzer Corps 2 doesn’t reinvent the wheel, nor does it really bring anything special to the table, but what it does it does well. Still, I hope that in the future the game receives more campaigns that allow you to play as someone from the Allied side.

Panzer Corps 2 is a turn-based tactical wargame which should be no stranger to fans of the genre, and although this sequel might not reinvent the wheel, what it does it does well.