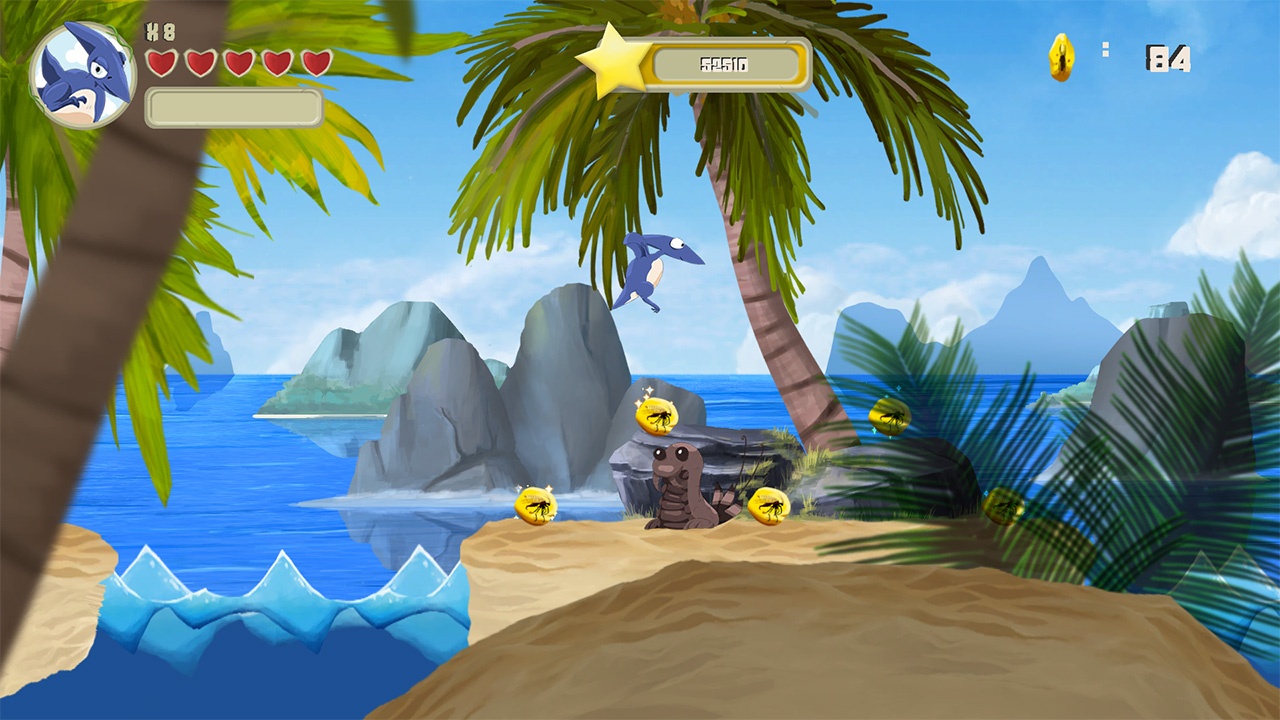 Dinosaurs, am I right? Remember being a kid and thinking that dinosaurs were the goddamn best? There was a time when anything, and I mean anything, was made better with dinosaurs. Transformers? Add Dinobots, perfect fit. Pasta? Dinosaur shapes means I’ll totally eat it now! Medicine? There’s a reason Dino was one of the Flintstone Chewables. And video games were no different, given the fact that Dynowarz is a frigging masterpiece. But times change: we’ve got another Jurassic movie coming, Universal Studios Theme Park has a great ride, and the Brontosaurus apparently never existed. Sorry, Littlefoot, your story is a sham. So, unfortunately, throwing a pterodactyl into a mediocre platformer isn’t going to simply make a game awesome, as I found out with Super Saurio Fly.

In the beginning, Super Saurio Fly has a lot of potential. The story is decent and works: you’re a father pterodactyl who needs to go rescue his eggs that have been stolen by bastard dinosaurs. Strangely, unlike DragoDino, you don’t have a choice to be the father or mother in this quest to get the eggs back, which I feel would have been something simple to implement and much appreciated by fans overall. It’s no big deal, but we frequently have scenes where the mother dinosaur is sitting in the nest, cheering on the father before a boss battle, and I’m just like “Okay, can’t we switch spots for a bit?” But whatever. 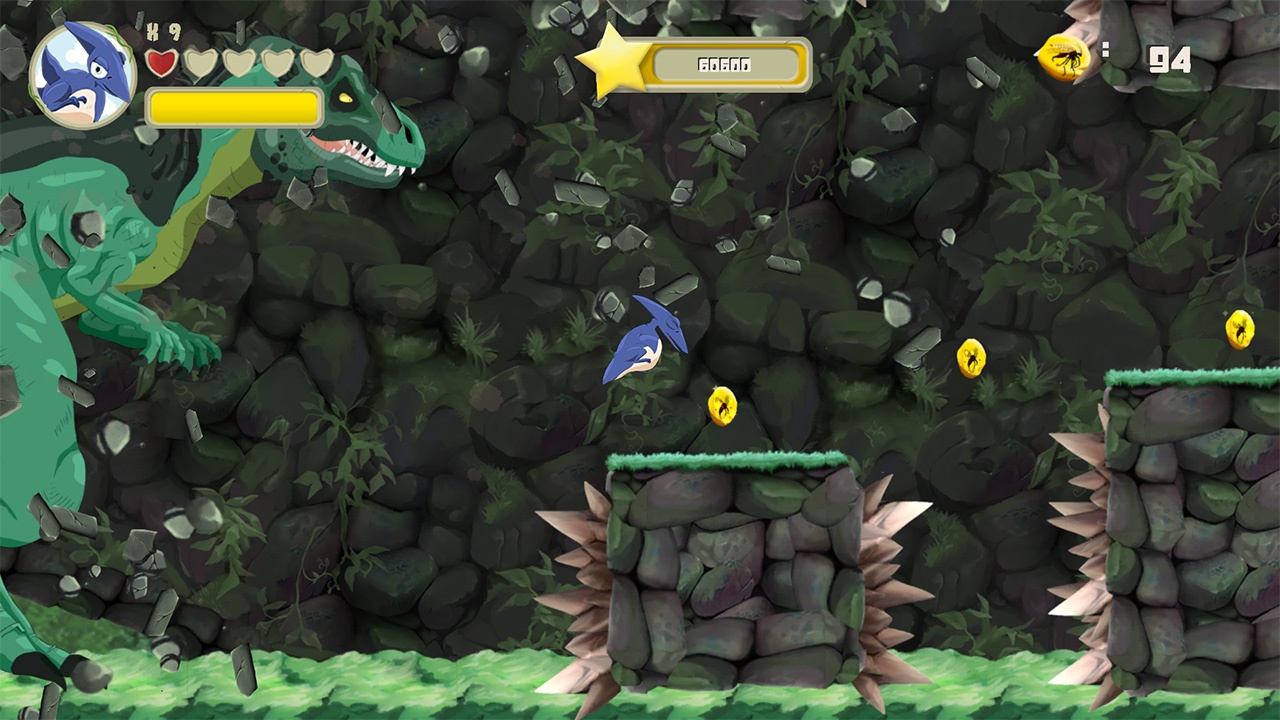 The art style of Super Saurio Fly is also pretty dope. I love the way everything is drawn and made, and it gives a lot of stylish pop to the game. This is another one of those times where I’m surprised that I hadn’t heard of the creators, FraxelGames, prior to this title. There’s an animated intro to this game that looks like it could have been a pilot for a cartoon in the mid 90s. It has more frames per second than anything else on Saturday morning and the character pop way more than Denver or even Widget. There’s plenty of color and variety between the different dino enemies, and you’ll see a lot in this game, from the surprisingly aggressive trilobites to errant cavemen who want to mess up your day. The only thing that I didn’t like about the art style was Super Saurio himself. I think the intention was to make him look angry and vengeful for his kidnapped eggs, but he looks tired and pissed off at the mission instead of the enemies. Like “Goddammit, these kids better hurry up and hatch because I’m SICK of rescuing them.”

Gameplay is a straightforward, 2D platformer that lets you move backwards and forwards, up and down, and all the spots in between. Super Saurio is a pterodactyl, and the devs did us a solid by allowing him to fly an infinite amount by simply mashing the jump button. There are quite a few stages where this isn’t going to matter: due to low ceilings, being underwater or an equal number of flying enemies, you can’t just coast through every level. Not every level. But a few. Especially at the beginning where mashing the fly button is the easiest way to deal with nothing and care about even less. These moments are kind of funny, because you can tell the devs wanted to give players a play style choice. The coins on the ground are for points and 1-ups (one hundred coins, naturally) and the fruit/meat is for healing damage. Neither of those things matter if you don’t get hit, so you create your own problem by choosing to dive into the fray.

Now, for the other 70% of the game where you need to be in combat, Super Saurio Fly is really unbalanced in terms of fairness. On the one hand, most enemies can be taken down in one or two hits. Super Saurio has a melee attack that has a range of zero and a limited use range attack that can toast enemies from two screens away. The range attack is rechargeable through eating hot peppers that enemies drop or just appear on the screen, and, if you can get the range attack, use it every time. The melee attack of headbutt leads to you taking damage almost every single time, and it makes me feel like a failure as a dinosaur. Additionally, you’ll find enemies are very generous about dropping peppers, so, as long as you don’t use up all your fire shots before getting to the next enemy, you should be fine. 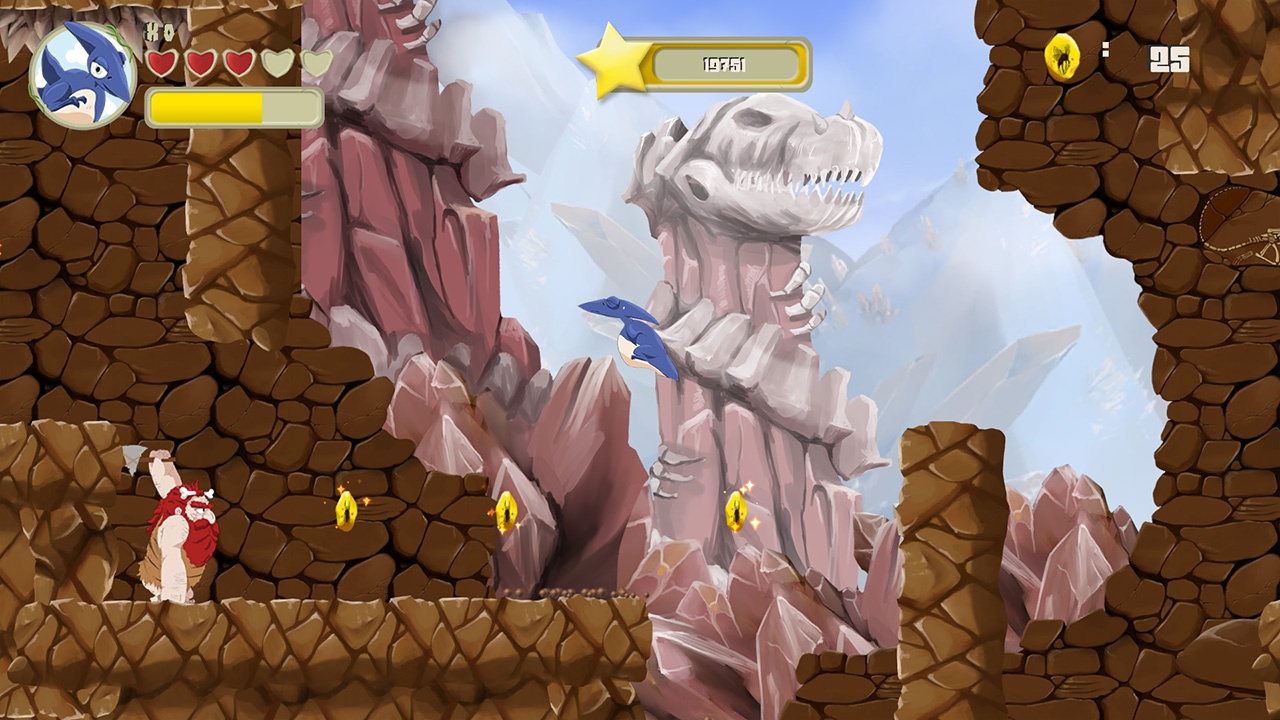 For most of the majority of the game, Super Saurio doesn’t feel like he’s moving with intent or purpose: his movements mirror the expression on his face. He’s reluctant to keep himself aloft, and will drop like a lead weight the second you stop pushing the fly button. He walks at a decent pace, but it always feels sluggish in comparison to everything else that’s moving around him. Like, the enemies are raring to go, and Saurio would really rather be watching Friends back in his nest. With the number of foes you face, this isn’t as much of a problem as you’d think it’d be, as long as you have some peppers on hand. But, for the traps that occur, it’s a massive problem. There’s a lot of spiky pillars and such that move on a timer, and, no matter how many times you do it, Super Saurio just gets his dumb ass hit in the most lackluster way possible. I actually needed to use a continue on the second world where underwater spike pillars required me to arrive with full health and manage to dodge ONE of them to keep alive to the other side. Did not happen for a while.

Lastly, the boss battles. These bosses, again, are gorgeously designed and look cool as hell on the screen. They’re massive, and appropriately dinomite (couldn’t help myself). But Super Saurio is a small thing with a large hit box, and his chili pepper power runs out fast. So you end up needing to melee attack, which means, surprise, you will definitely take damage. There’s a certain level of futility about headbutting a giant dinosaur while also getting hurt in the process, even if you can find fruit to heal yourself throughout the battle. By the time I rescued all the eggs, I felt like Saurio looked: utterly done with this.

Super Saurio Fly is a great looking game, there’s no disputing that. Quite a bit of the design is spot on, and there’s enough enjoyment here for the average player to spend a few hours within. However, part of that time comes from the sluggish controls and needing to retrace your steps over and over after small mistakes. While not the worst game out on the market, Super Saurio Fly is decidedly “okay,” and should only be purchased if you’re really hard up for pissed off dinosaurs and some surprisingly well drawn atmosphere.