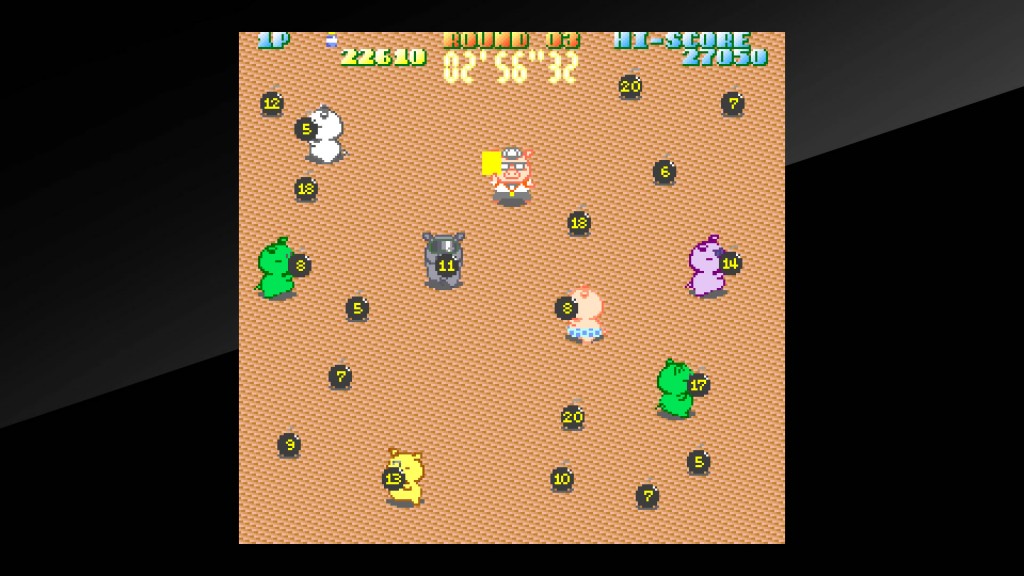 This is basically a verbatim conversation I had with my wife when she found me playing Hamster’s latest Arcade Archives release for the PS4. Another bizarrely random Japanese game for the collection, Buta san is a 1987 arcade game developed by NMK and Jaleco that has pigs playing what appears to be dodgeball with bombs. The easy response as to why this is happening would invariably be, ‘because Japan’, but, well, yeah, that’s about right actually – because Japan.

Staged as some kind of professional tournament, each stage has you taking on a set number of other pigs as equally intent on seeing you blown to smithereens. The set-up is simple if somewhat crazy, but with a huge number of bombs (bombs that are continuously replenished by the pig-based officials), the action during each stage is frantic and often very entertaining. 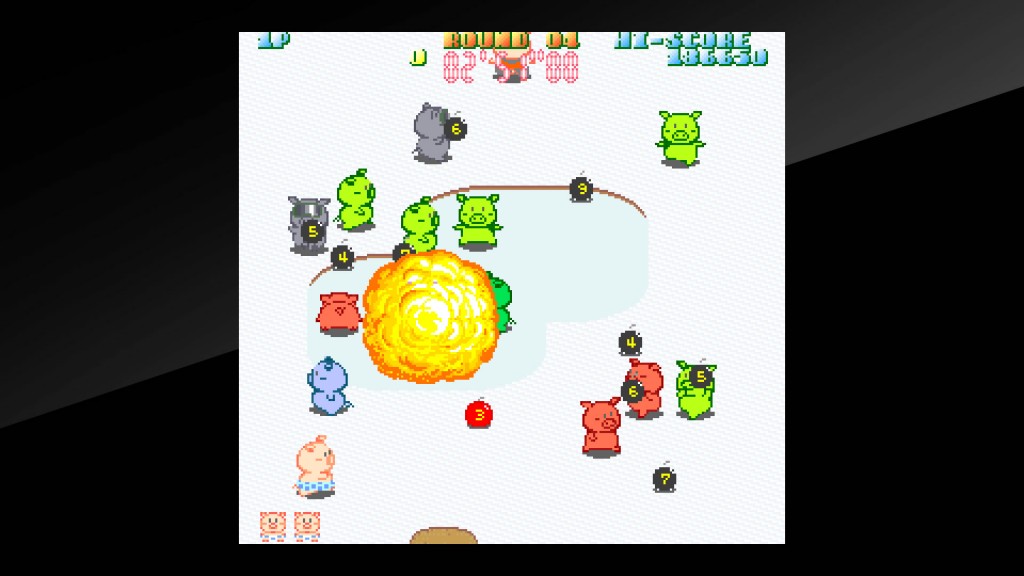 The core mechanics don’t go far beyond throwing and ducking, but with so much going on, it’s arguably for the best that the mechanics are kept nice and simple. You see, not only are there a huge number of bombs that can be picked up and thrown at your swine-like competitors, but each bomb also has a unique set-timer (between 5 and 30 seconds) meaning that those simply laying on the floor can and will go off at any moment. Adding further mayhem to the proceedings is the fact that the bombs can be set off via close proximity explosions meaning that a bunch of 20 second bombs can all be set off by a sneaky 5 second bomb snuck away in their midst.

At a glance, it all looks relatively straight forward, but in motion, it’s much harder to keep track off. Not only do you have bombs with unique timers strewn about the fixed screen playing area, but the aforementioned officials are sneakily adding new bombs all the time while the often huge number of opposing pigs are lobbing bombs all over the shop. As you can imagine, it gets even more hectic when a second player is added to the mix. Not only does this lead to a simple increase in the number of foes on screen, but as always, human players are invariably craftier than their AI counterparts, thus making it even trickier to keep track of your increasingly dangerous surroundings. Whether it be on your own or with a  friend though, Buta san is a consistently enjoyable arcade game that happily forgoes common sense in the name of whacky fun. If I had to compare it to anything, I’d say that it’s kind of like playing a less strategic version of Bomberman……while on acid. A lot of acid. 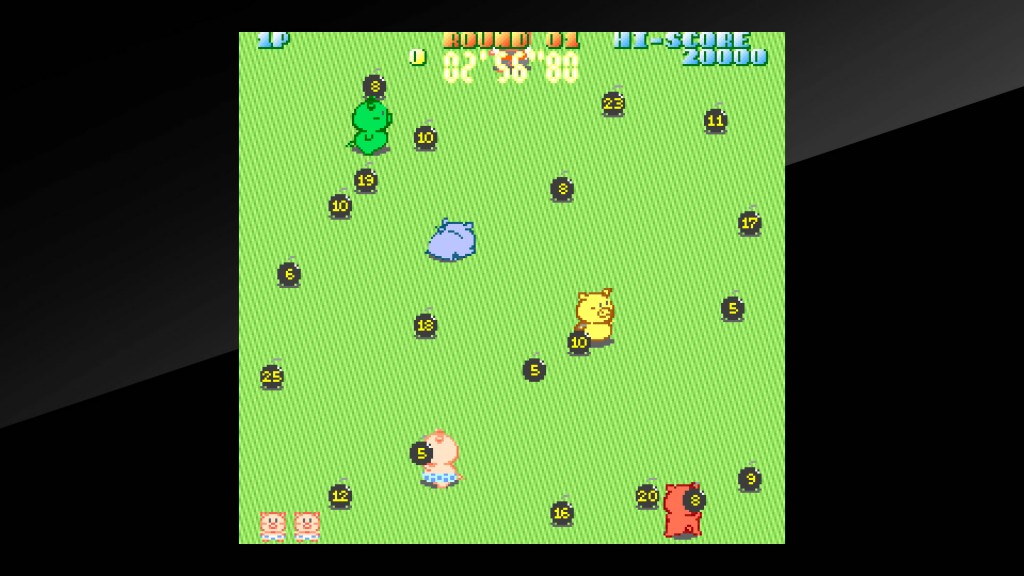 Oh, did I mentioned whack-a-mole earlier? Well, after completing a handful of stages, you’ll be treated to a slightly awkward but undeniably fun take on the whack-a-mole template in which the moles are, you guessed it, replaced by pigs. It’s an odd addition to an extremely odd game (just check out the truly bonkers game over screens), but one that, despite not making much sense, adds to Buta san’s sense of hectic and incessant madness.

Yes, the lack of additional extras is a blow (these increasingly obscure Japanese arcade releases are screaming for some kind of history section at the very least), but despite the bare bones package offered by Hamster and the fact that the online leaderboards are essentially rendered pointless by only recording the worlds’ top 100 players, Buta san remains a hugely entertaining and genuinely bonkers Japanese curio that is more than enjoyable enough to warrant a look by anyone interested in the 80s arcade scene. The visuals are understandably rudimentary by today’s standards, but Buta san, with its bright colourful aesthetic and endearing cartoon design, stands as one of the better looking Arcade Archive releases and a welcome re-release for a game that the majority of Western gamers will have never heard of, let alone played.