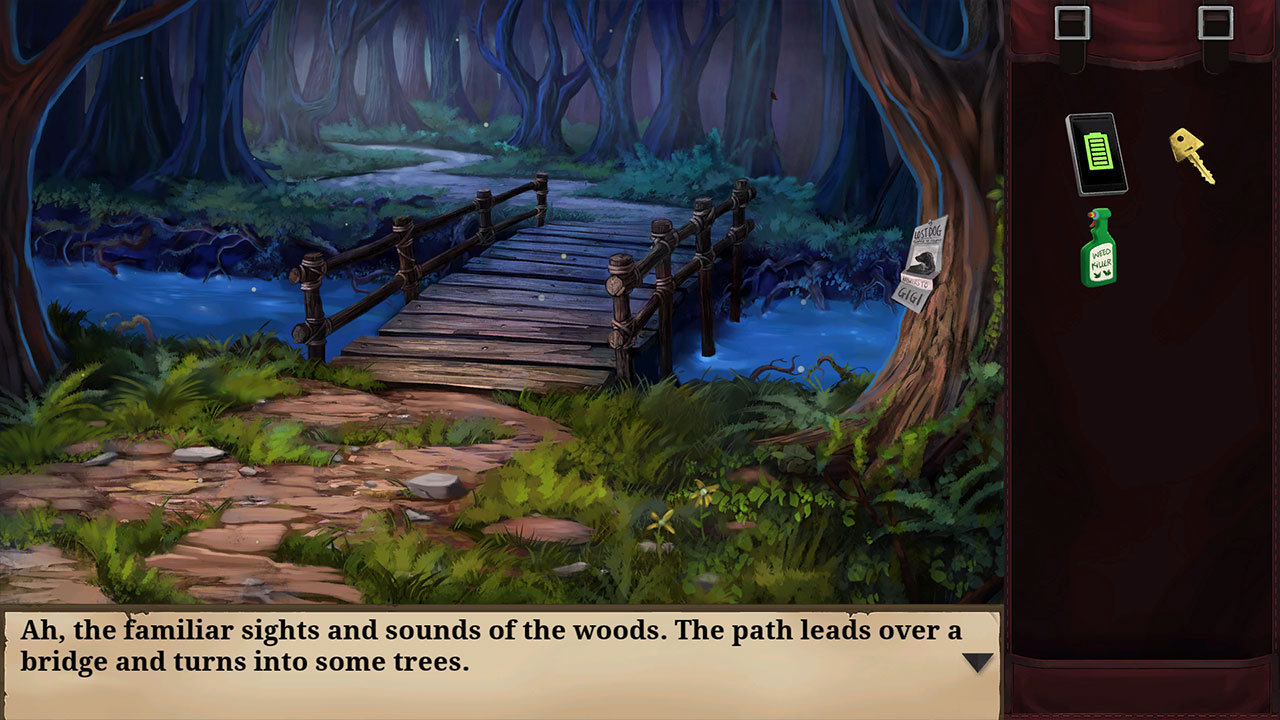 Oh Goosebumps. If ever there was something that better encapsulated the 90s, I can’t imagine what it would be. You have a book series for young adults that had nothing to do with religious undertones, sexy supernatural leads or the possibility that the faceless heroine is actually super special and important. In fact, only a handful of the titles are connected. Then you have that fact that they were all scary stories, but none of them focused on gore, hyper violence or an oppressive government. Finally, they got a bulk of their sales from the Scholastic book fairs, which meant kids actively begging their parents for money to buy books from school to read in their free time. R.L. Stine really made a killing with these, Fear Street, and other iconic creations of suspense and fear (but not his adult books). And the movie wasn’t bad, it just wasn’t what people wanted it to be. Anyway, when you see names like Wayforward attached to bring a new Goosebumps game to the Switch (this is not, sadly, Escape from Horrorland), you have to give it a try.

Speaking of the movie, Goosebumps: The Game is actually a prequel to the film that was released in 2015. Players who’ve been down this path before should also know that this is not a new, original game that was crafted in the last couple of years. Goosebumps for the Nintendo Switch is an updated, redesigned version of the 3DS title that dropped some time ago. It’s more on point with the PC version, though with some added flair for the Switch. The Joycons have some great HD rumble to add atmosphere to the creepier moments (Wayforward is so good about HD rumble). The story, however, remains the same: a young boy comes home from school to find that his home has, inexplicably, been replaced by a spooky mansion, filled with shadows, monsters, and honest-to-goodness ghosts.  As he figures out what’s going on, it turns out the infestation of spookiness has spread to other parts of his town, and it’s all due to the influence of Slappy, the evil entity from Night of the Living Dummy. Survive a curious expedition through multiple homages and nods to famous Goosebumps books as you try to get things back to normal and stop a nefarious plan! 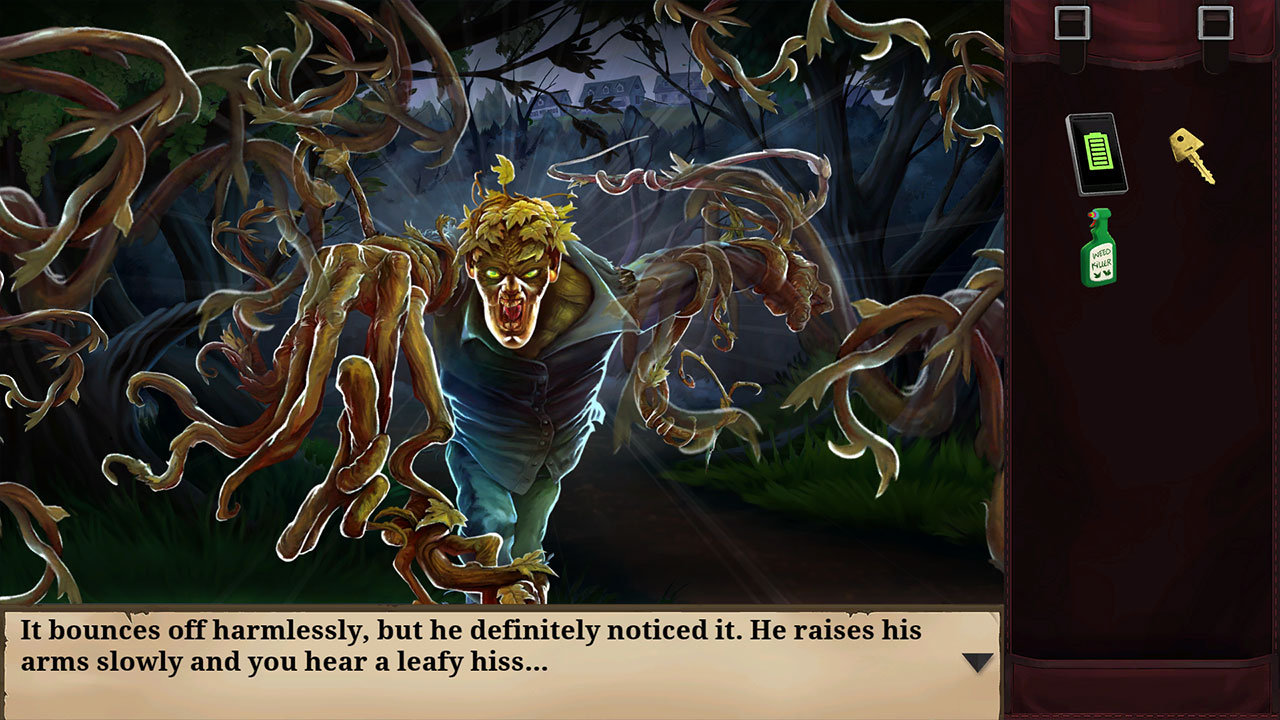 I call Goosebumps: the Game a point and click adventure only because I’m not sure what else to label it. It’s not a hidden objects game, because most of everything is easily visible and there’s plenty of tracking and backtracking in order to use different items that you find. Your inventory will be full of useful and useless stuff alike, but not everything will be used immediately. It’s actually pretty cool the way that you move about the different rooms, areas and places, trying to remember what you’ve seen and what you might need to do. If you’re not careful, there’s a very obvious clue hidden in the first forest path that, failing to remember to go back there, will seriously slow you down later on in the game. Additionally, there will be dialogue choices with a handful of characters, some of which is atmospheric and some actually important to not doing yourself over. You’ll have plenty of time for trial and error, however, because the game is relentless.

Some people might not remember Give Yourself Goosebumps, a series of adventure books that came after the main series. In these, the reader becomes the hero, you move through by deciding which page to turn to, and, usually, you die several times in the process. You don’t know you’re going to die until you make the mistake, because Goosebumps is all about having unassuming things become lethal. That’s exactly what Goosebumps: The Game is like. One of the very first times you head out, you run into a dude on a path. He looks weird, but you can’t talk to him. So you try to walk away, and, guess what, he’s a plant man, and he kills you. Awesome. So the next time you walk into that room, you spray him with the weed killer you stole from the janitor a couple of seconds ago. Now the dude will never harm you again, but you had to get killed once to understand it. That’s definitely the ebb and flow of Goosebumps: the Game. Get murdered once, shame on you. Get murdered twice, shame on me. You learn trial and error through your own death. Which, actually, isn’t that bad. 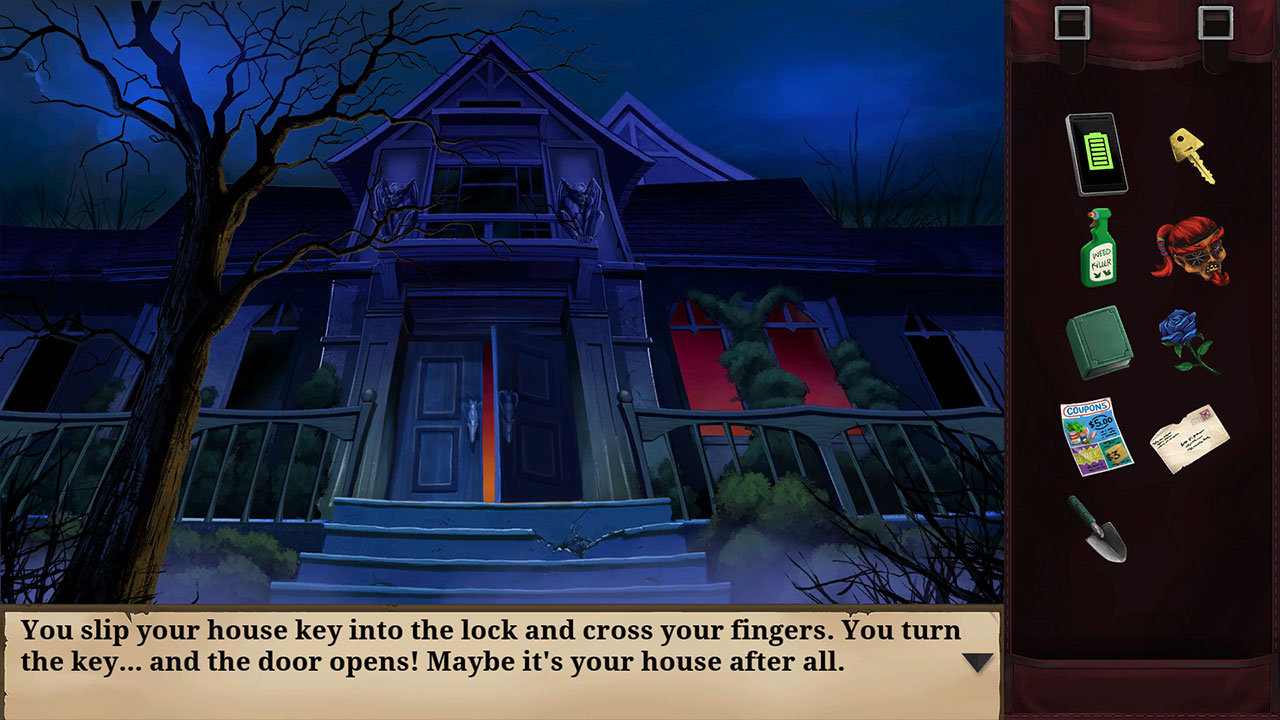 Goosebumps: the Game is incredibly effective as a marketing tool (movie games have gotten so much better in past years), but also as a game to bring kids into this kind of point and click world. The tutorial screens at the beginning are informative but non-invasive, and really aptly timed. It tells you how to save just seconds before your own murder, and sets up expectations accordingly through this action. You know there’ll be deadly mistakes, but you simply need to reload and try again. In this way, it feels like the game is less like your average PnC and much more akin to the scary puzzle games of the NES era (specifically classic Shadowgate and Uninvited).  There are just some choices that are bad ones: when you see a massive hole in the tunnel that seems to lead to nowhere, “jump in” is never a good choice, but players are going to want to try it out. Running into ghosts is a scary ordeal, but less so when they appear to be kid ghosts who want to help you if you help them. When the bad guys disintegrate into nothing, you don’t feel any kind of twinge of guilt: they’re one dimensional, evil figures, with no origin story or mitigating factors. It’s something that makes childhood incredibly simple, and something that games have moved away from in recent years because it’s arguably more fun when the characters on both sides of the war are complex.

But it’s especially effective because it plays like a Goosebumps book would. If you want, change the game to the pointer interface and use a single Joycon as a cursor to really get into this exploratory, one-handed world. The way that things solve themselves feels the way the book would have made it out to be: the blue rose that you find early on turns out to be the key to not getting trapped by a leprechaun later on. The clipshow that is seeing famous faces from old books – Monster Blood, Let’s Get Invisible, Curse of the Mummy’s Tomb – and abjectly breaking the fourth wall to let players know that your character is also aware of Goosebumps, and this sort of meta adventure is what will lead to the final showdown and the successful ending. Hell, even the ending feels like it was lifted straight out of a book, but I won’t spoil it for you too much: just know if you’ve read even a couple of books in the series, you’ll chuckle.

While it’s not a terrifically long adventure, Goosebumps: the Game is enjoyable, exciting and really gets you back into the mindset for what was great about the books and what was fun about the movie. The puzzles are tricky but never to the point of utter frustration. You’ll die, a lot, but you’ll also deserve it in order to a.) move the plot forward and b.) punish you for doing silly things. My only gripe is that Wayforward would have released a brand new game in anticipation for the upcoming moving instead of reviving the old one, but I can hardly fault the logic. Goosebumps looked medicore on the 3DS, never existed on the WiiU, and was warmly but mildly received on the PC. This is a chance for players to take a chance on the tale they never knew existed, and still sets up things well for the movie. Have a Happy Halloween with a bit of a fright on the Switch, yes?

Goosebumps reminds you what it was to be delightfully scared as a child, giving some of the same spooky thrills the books used to bring.