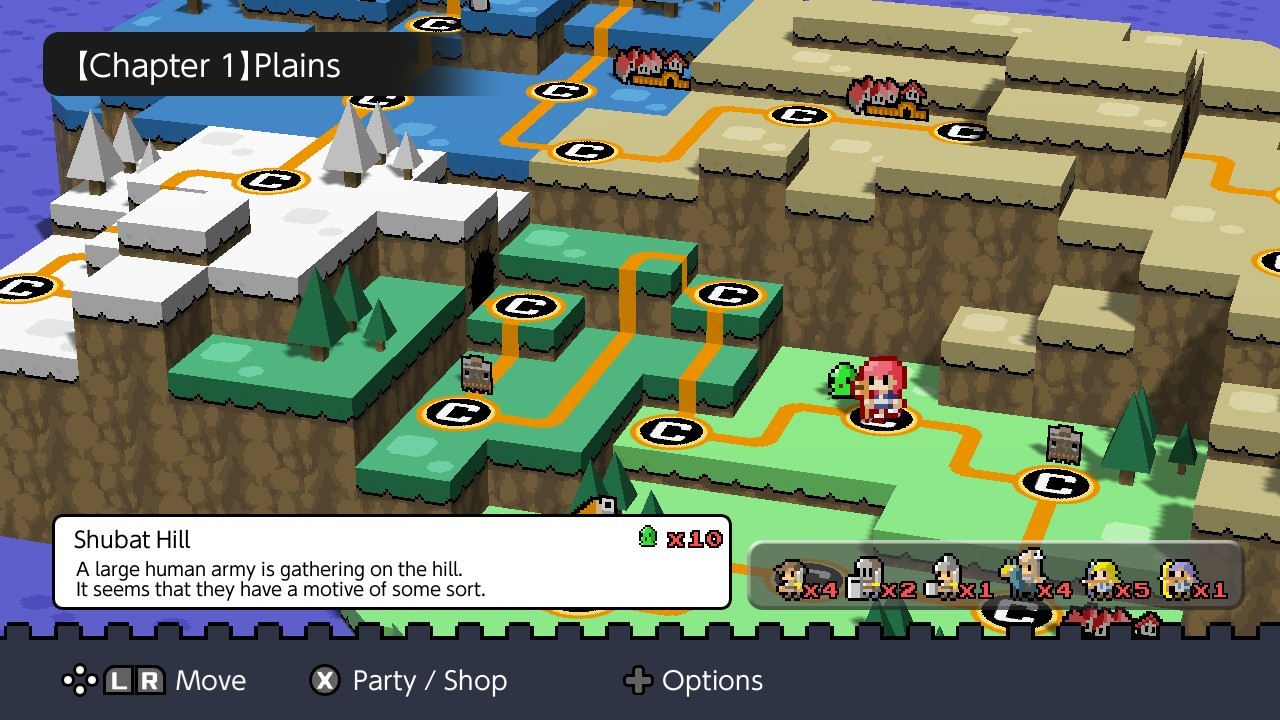 Tactical RPGs have been around since the beginning of video games, though, they have never been as popular in the West as they are in the East. There has been a surge in popularity recently with the success of the Fire Emblem Series. Enter Altair Works Corporation’s Slime Tactics, the sequel to the 2016 Ambition of the Slimes.

Slime Tactics takes the gameplay of Fire Emblem and gives it a crisp 8-Bit art style and unique twist to the gameplay experience. The game is in the style of HD 8-Bit. Think along the lines of Octopath Traveler. With the choice to use this style of graphics, it makes the game look great whether it is docked or undocked mode. Where the graphics hit it out of the ballpark, music wise, it’s a strike. The music is the same loop for every level apart from the boss fights and overworld. There is no variety to the music presented in the game other than this. 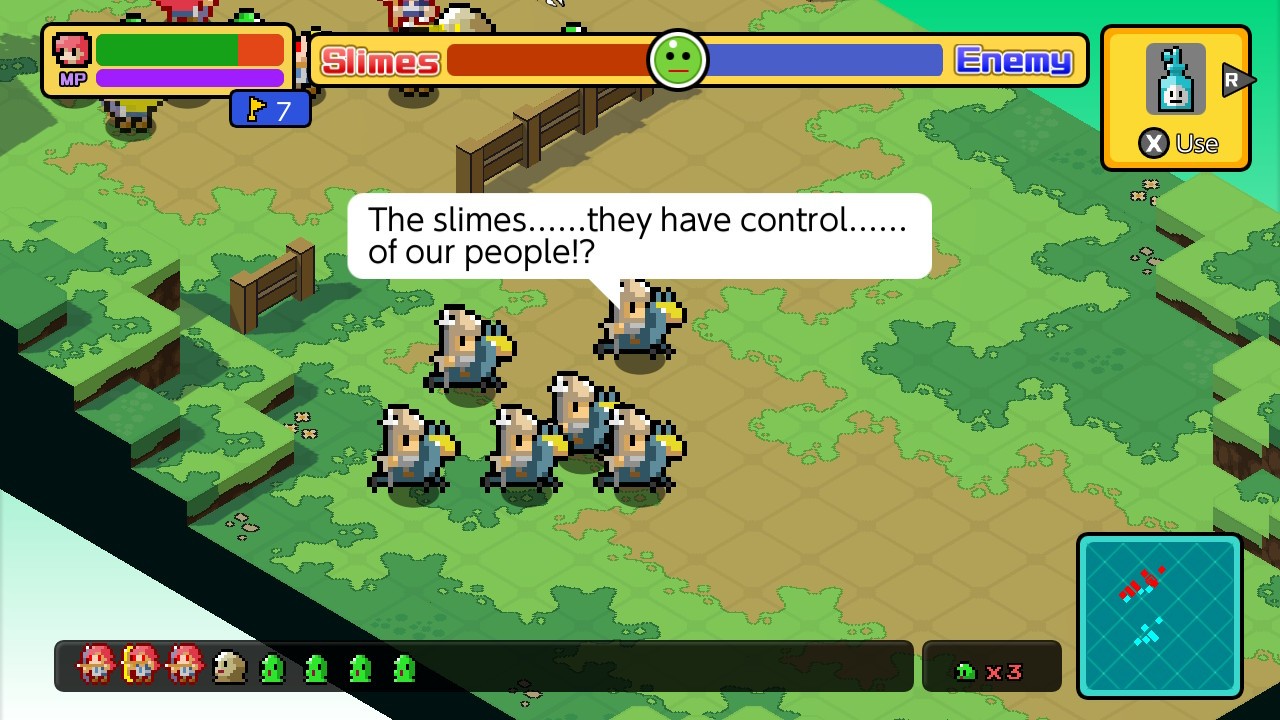 Gameplay wise, it is very similar to Fire Emblem with a slight twist to the combat system to give it a unique style and identity. You play as a priestess that controls an army of slimes. Levels are entered via an overworld. Before embarking on a level, it will inform you on the bottom right of the screen how many slimes you can with you. You can access a party menu on the overworld where you can manage your different types of slimes and pick and choose which ones you want to take into battle.  There are twelve unique types of slimes in the game for you to utilize. You only start out with the basic slime at first, but, as you progress through game you unlock the rest of the slimes to have at your disposal.

Each level starts with a small cut-scene that leads into the battle.  The levels consist of you walking around the map and deploying your slimes. This is where the twist happens, your slimes themselves do not have to ability to attack (with the exception of a few types). What they do is go to the nearest enemy human and try lower their soul meter to zero. Once they have done so, they take over the body and become that unit. It creates a unique gameplay tactic where you need to understand the special abilities of your slimes in order to maximize their efficiency. For example, you want to make sure you use your rock slimes against archers as they have a higher defence to them and so forth. As playing as the protagonist you have no ability to fight other than firing a couple of little fire shots that need to be frequently recharged over time. These fireballs mostly anger and draw aggro from the enemy minions to follow you instead of attacking your slimes. The level is completed once you have eliminated the entirety of the enemy force or you run out of time, which is typically about 10 minutes. The priestess has access to different items to help support the slimes throughout battle. 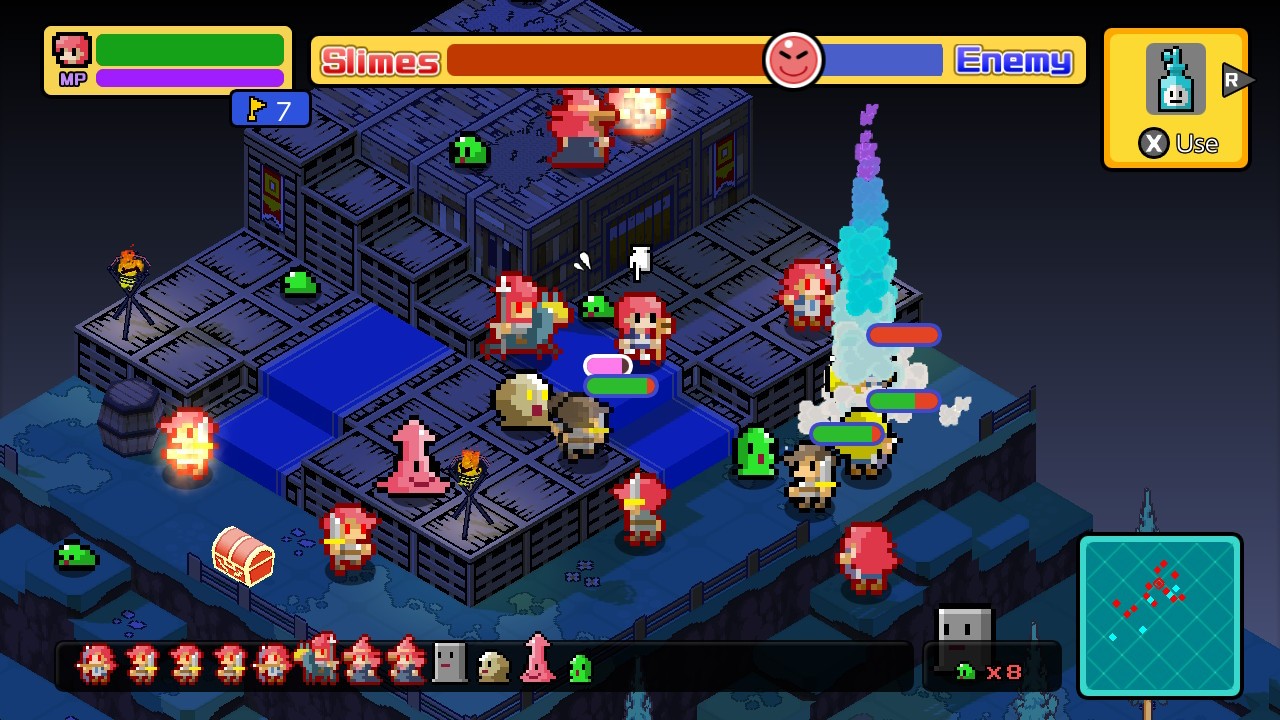 The game relies on a fail first, then we’ll give you a tip, type of approach. For example, during the first boss fight you are thrown into it without explanation. It feels like you are expected to fail, because, once I died and failed it an on-screen message pops up that tells you how to fight the boss.  While this approach doesn’t seem all too bad, it could create a negative experience for newer players. The game also encourages grinding. All too often while playing this game, I would fail mission time and time again because of lack of certain units needed that would benefit me greatly in the level. I had to go back and replay levels again in order to earn enough points to purchase additional slimes. In the shop menu you can purchase these additional slimes. Most begin at about two-thousand points. This begins to ramp up in price per slime purchase, probably to not abuse the system and rig it in your favor by buying a certain slime so many times. The overall replay value boils down to being forced into playing older levels to earn enough points to buy more slimes. Other than that, the story is linear.

Overall, the game is fun and does offer a variety to make it unique. The battle system does well to separate itself from other games in the genre. While I did wish there was a better selection of music in the game, I did appreciate the art direction and time invested in the other aspects in the game that help offsets the lack of music. I would recommend this game for anyone who loves TRPGs, as for $10 on the eShop offers a lot of bang for your buck.

Slime Tactics is a fun 8-Bit take on the Tactical RPG genre. The music is a bit repetitive yet catchy and the game play requires strategy. Overall the game is straight forward fun with no frills.