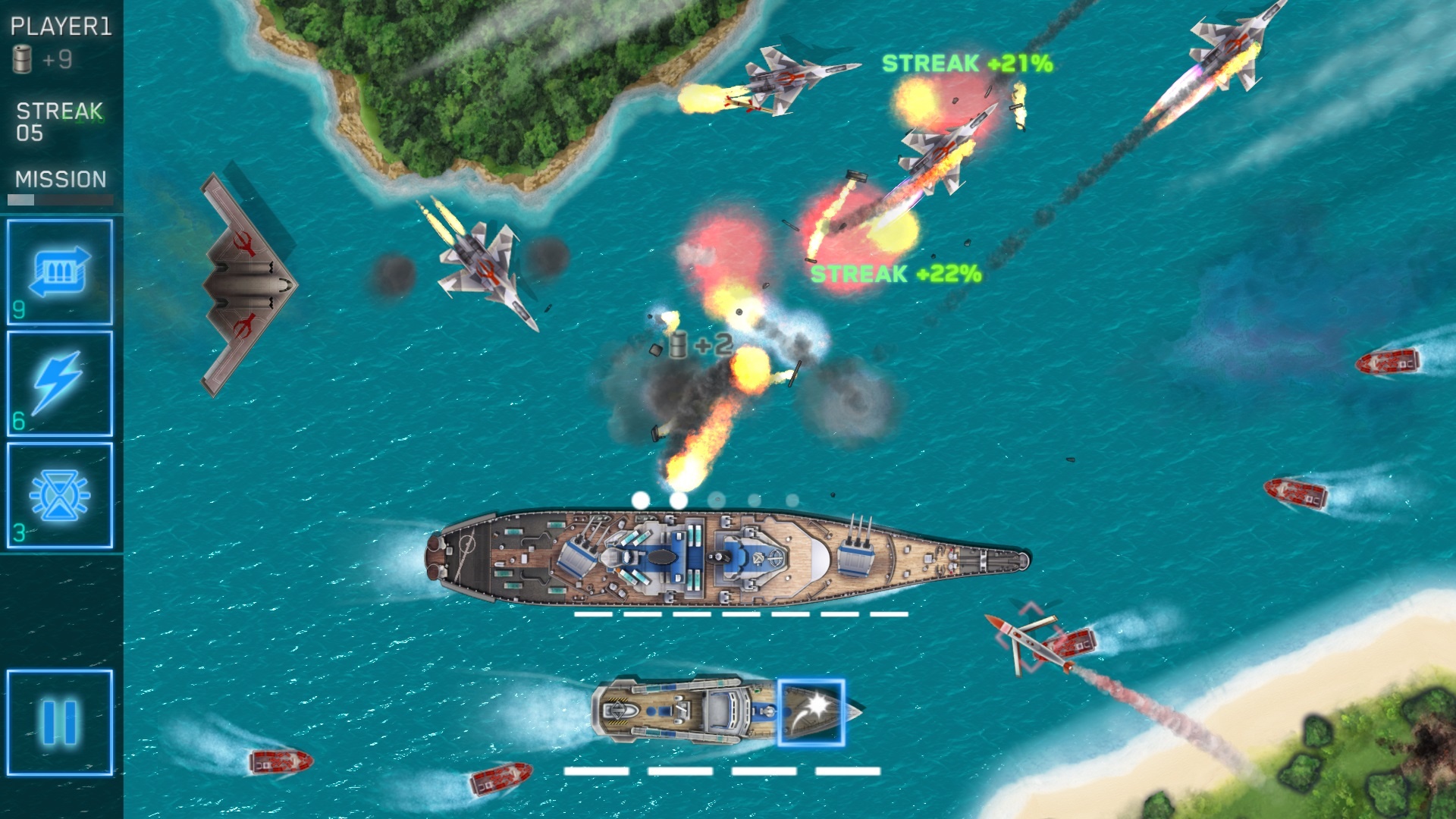 It can be difficult these days to come up with a new, creative idea that builds upon a tried-and-tested formula within any particular genre. The reason being that many a good idea may simply not be practical in reality and fail miserably or it can simply change the face of what we know, presenting a fresh take on a mechanic that we may have all become accustomed to. It’s usually an easier option to try to produce a different take on things, rather than try to devise a whole new concept and this is a premise that Bane Games has undertaken with Battle Group 2, a new naval shoot-em-up that is sailing a release to port upon the Nintendo Switch.

Published through Merge Games, this arcade-style shmup has taken all of the core ingredients of its genre, yet glossed over it all with a shiny new mechanic that simply makes this a game that shines with its naval and sea-based warfare. Whereas normal associations with this type of game would involve traversing a central ship around a bullet-hell screen of plasma shots and laser beams, Battle Group 2 has removed the need to keep one eye on the screen and one thumb on the joy-stick, instead opting for a relatively static craft. Instead of manoeuvring around the screen to avoid enemy attacks, you are tasked with defending your craft through a series of missile strikes and support craft to keep the onslaught of enemies at bay.

It sounds a simple premise and in some ways it is; but then again, it’s also fiendishly well designed in a mechanic that simply keeps you playing. If I was asked to best describe the game, I would have to say that it stands somewhere between Atari’s Missile Command and Capcom’s 1942; at least in terms of how it works and plays. However, rather that being just a straight-up shmup, there is also a tactical element involved too, giving the game a slight feel of depth in what you can achieve. Moving along a horizontal axis, instead of a vertical plane, your task is to defend your ship, or ships, against a new threat that has arisen in the world, known only as Talon. As the air fills with fighter jets, helicopters and civilian craft, and the seas surge with patrol craft and submarines, you must launch a barrage of defensive counter-measures against the onslaught of enemy missile types in order to protect your ship or fleet. 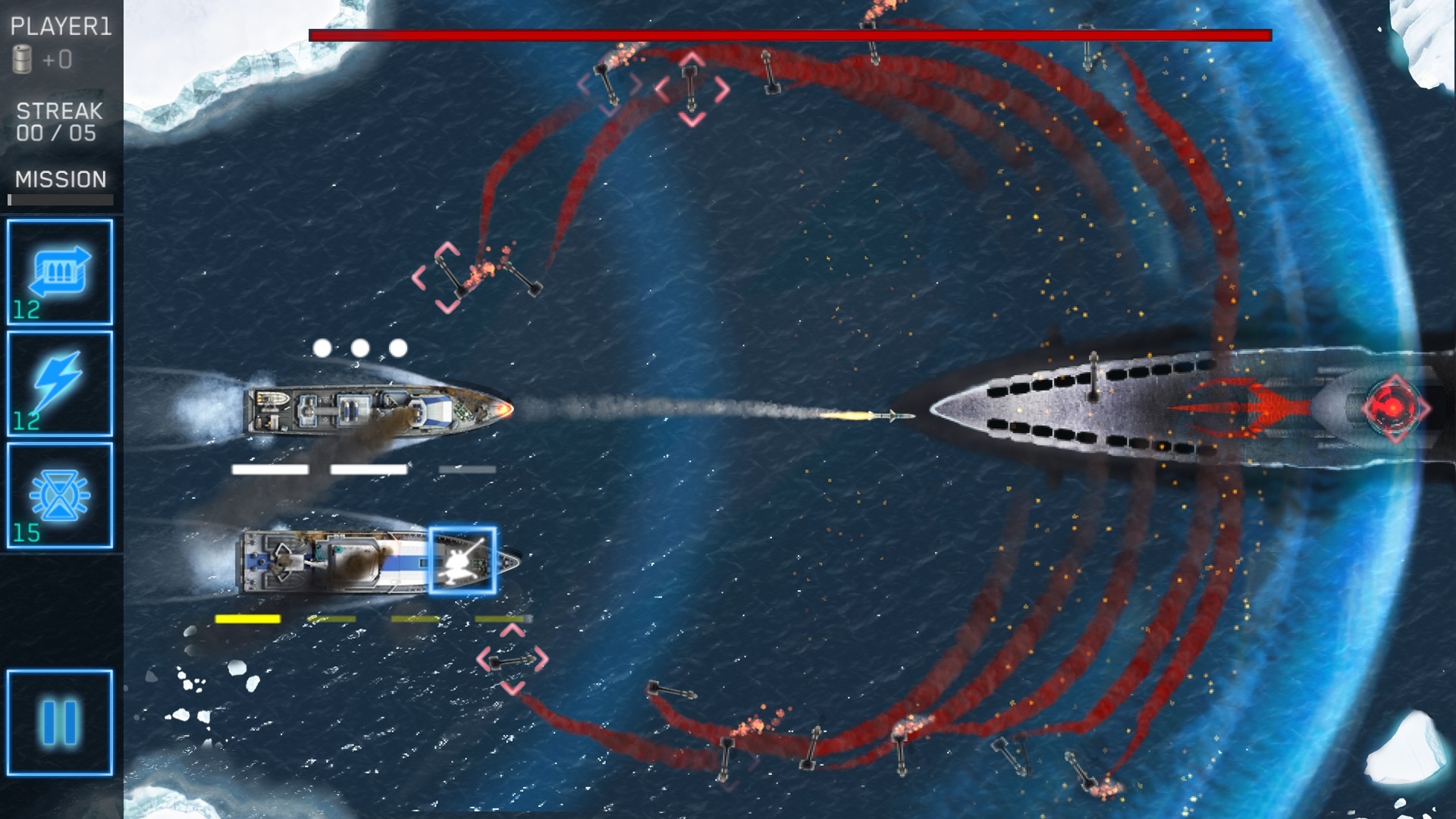 Instead of moving your ship though, you control a cursor that determines the trajectory of your defensive missiles. In this respect, it’s vitally important to try to determine the flight path of any craft or attacking missile in order for your rockets to intercept any enemy strikes. Viewed from a top-down 2D perspective, enemy incursions can happen from any edge of the screen. With a limited arsenal, although automatically refillable, of barrage of missiles available, you must determine where and when to fire your missiles to provide the most effective protection for your ship. However, there are also a number of other options that can be utilised to help even up the playing field, or at least the seven seas.

As the fleet commander in captaincy of your own vessel, you are also joined by a support vessel that can help with its own defensive measures. These support ships can come in a variety of guises, although you can only have two ships within your flotilla; your own ship and a support vessel. The capabilities of these support craft can vary in a defensive or offensive style, with some containing very accurate missile models, chaff or flares to confuse incoming attacks and even launch air strikes against pre-determined targets. However, in order to build your fleet, you must accrue resources in order to be able to afford to buy new craft. This is done by obtaining oil reserves that can be found by destroying targets and land-based buildings.

This form of currency can also be used to upgrade any existing vessels, thus increasing missile counts, decreasing reload times or granting more powerful shielding. This gives the game a good level of replayability, although it also encourages a good deal of grinding too, especially if you want to make use of the extra fire-power of the more expensive models of support craft. However, this isn’t just the only level of support that is available to you. As you progress through the thirty or so levels, further abilities become available to you; some of which can be literally the difference between life and death. These satellite abilities can range from EMP strikes that knocks all airborne missiles out of the sky to the Hypertime mode, which slows down everything around you, allowing you to send a barrage of missile strikes against a series of slow-moving targets. Again, these only come in a limited supply, although their ammo counts can be recharged though currency purchases. 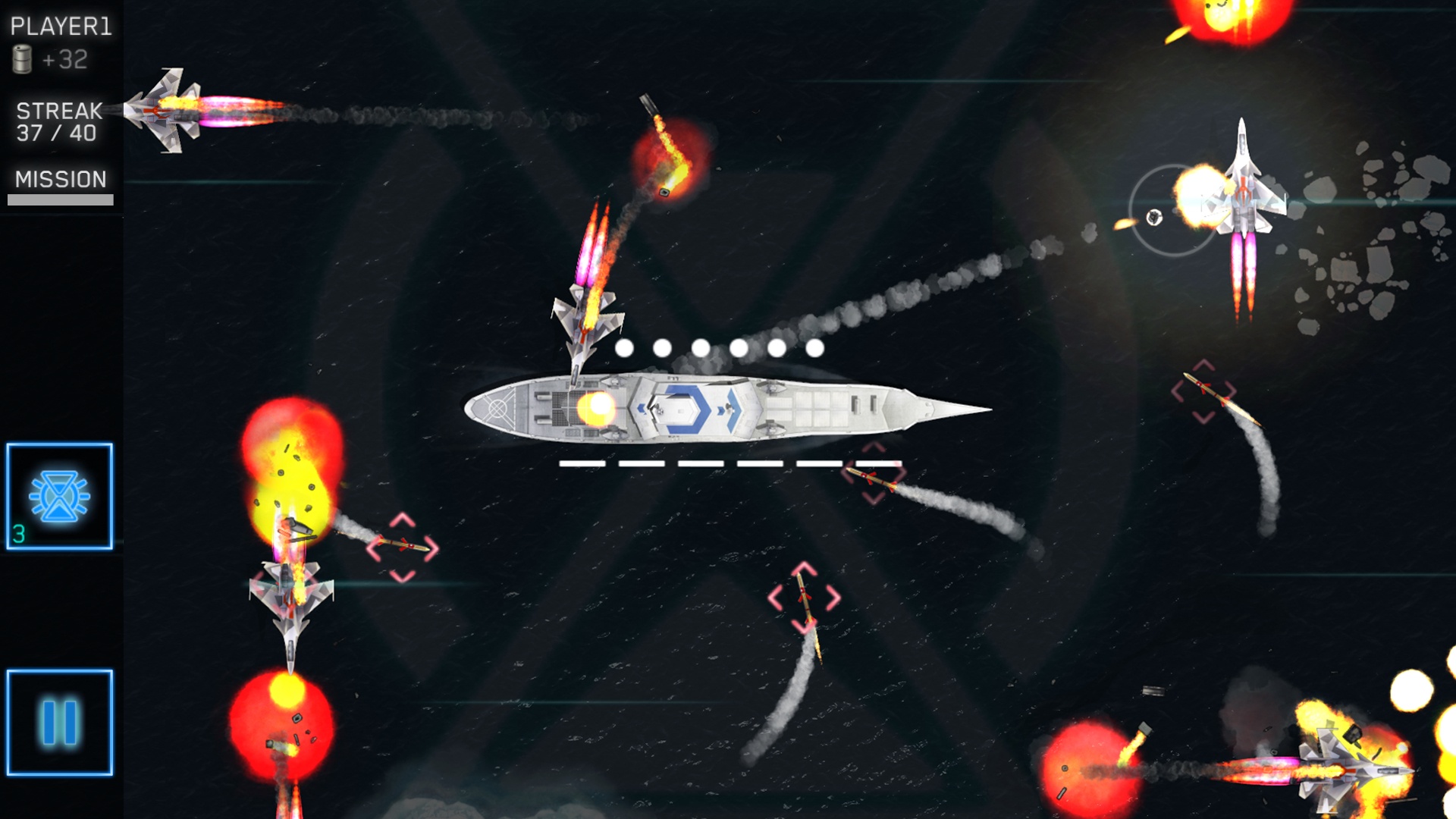 Having such an array of arsenal abilities and containing a high frequency of enemy attacks does, unfortunately, highlight a slight concern it terms of the game’s control scheme. Although playable with the use of conventional controls, it simply can’t match up to speed and agility of using the Switch’s touch-screen capability. Yes, you can play on the big screen, but due to the fiddly nature of controlling a cursor with a thumb-stick, you’re simply presented with a B-movie. However, playing in the Switch’s portable mode and utilising the full capability of the touch-screen creates a game the feels sublime in its execution. Whatever mode you play in, the game is very playable, but at the same time it does highlight the large width in the gap between using control schemes and in what context they are best used for.

Despite the whole premise of the game sounding quite basic in its execution, there’s a lot here to like. It’s exciting, it’s enthralling, it’s addictive and it’s atmospheric; and it’s a pretty decent challenge too. Each of its thirty levels are procedurally generated in terms of content and enemy formations, offering a variation with every playthrough that keeps even the most keenest gunner on their toes. They also take place within three distinct zones, from the arctic to the jungles and industrialised areas; as well as these there are also other variations, my personal favourite amongst them being the green-induced night vision varieties. For a 2D top-down game to, the graphics are very impressive with highly detailed models and crest-sparkled waters. Where the game does lack though, is in its capacity to tell an engaging story. It’s all rather clichéd in its approach and one that never really reaches its full potential.

Overall, Battle Group 2 offers a nice variation on the shmup theme, as well as produces an ideal casual game that sits nicely upon the Switch. Although simplistic in its nature, its whole presentational value and gameplay shines throughout with an addictive quality and an immersive field of atmospheric content. Although only a single-player experience, it holds enough depth to warrant numerous play-throughs; although it can feel a bit grindy at times. However, for its pricing, there is an extraordinarily amount of fun to be had with this title. It’s locked, it’s loaded and is about to launch to one of the most exciting games to come to the Switch this year.