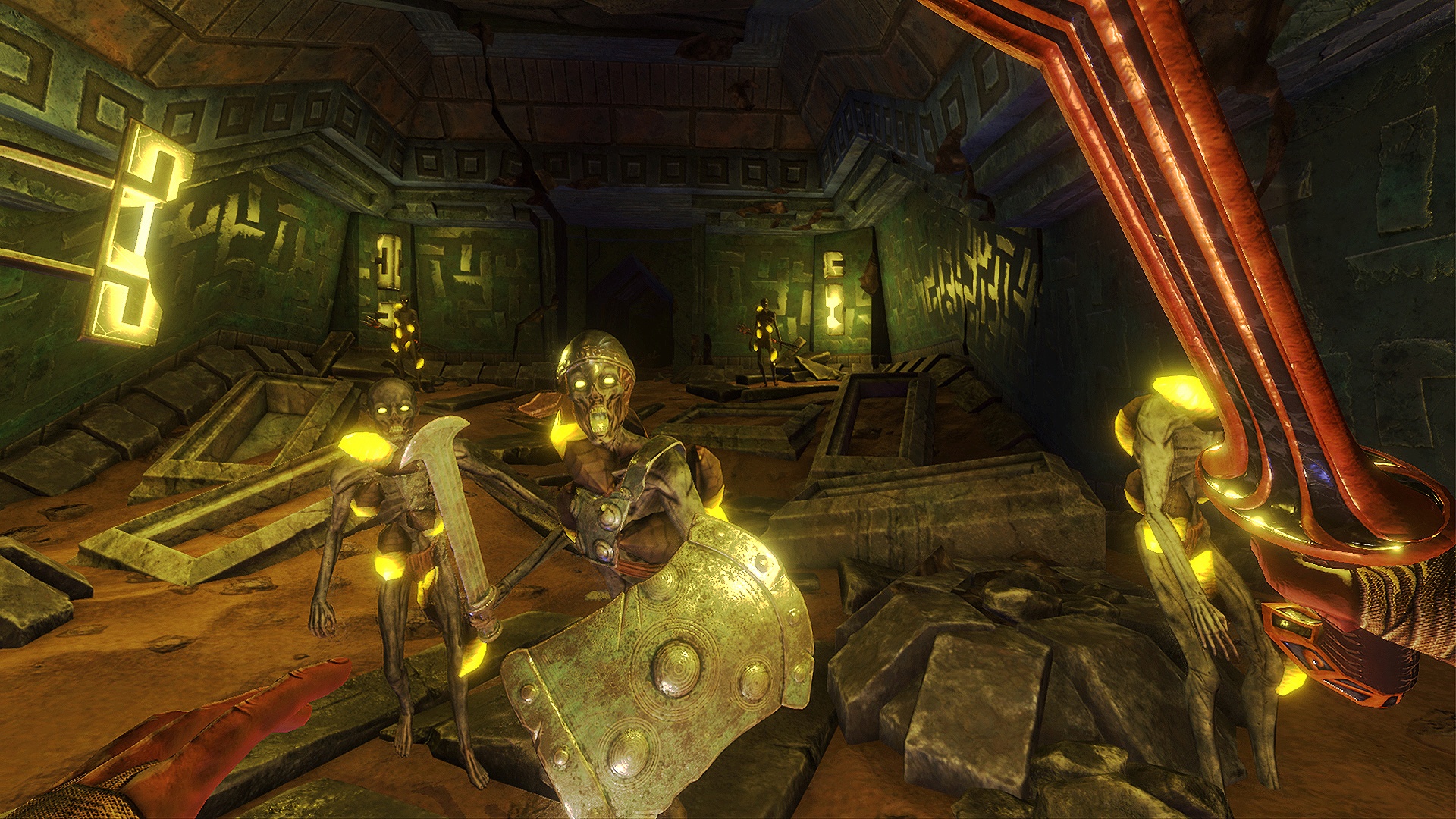 Over the last couple of years, old-school FPS have been making a resurgence, one which I’ll be eternally grateful for. From id Software’s DOOM to indie titles like DUSK and AMID EVIL, there have been plenty of titles to entertain those that have been craving for a shooter along the lines of something like the old Quake games. With that said, I don’t think we can have enough of these types of games, and for that, I’m thankful that ELDERBORN exists.

ELDERBORN is a first-person melee game, which is accompanied by a hefty score of heavy metal and level design that takes you back to the old classics. ELDERBORN’s story isn’t written anywhere or conveyed to the player in the most common manners. It is one of those games where you kind of have to figure out what’s going on based on what you see. Still, this has never been the strong point of any first-person perspective games, so if you’re not new to the genre, you shouldn’t feel like this is any different.

At the moment, content is fairly limited, so please bear in mind that these impressions are pretty much a preview of what is hopefully to come in the future. ELDERBORN is a really weird game for me because while almost everything about it makes me feel like I’m playing something from over a decade ago, the idea that it is a melee-only game contradicts that first notion on my head, and I don’t mean this in any bad way. 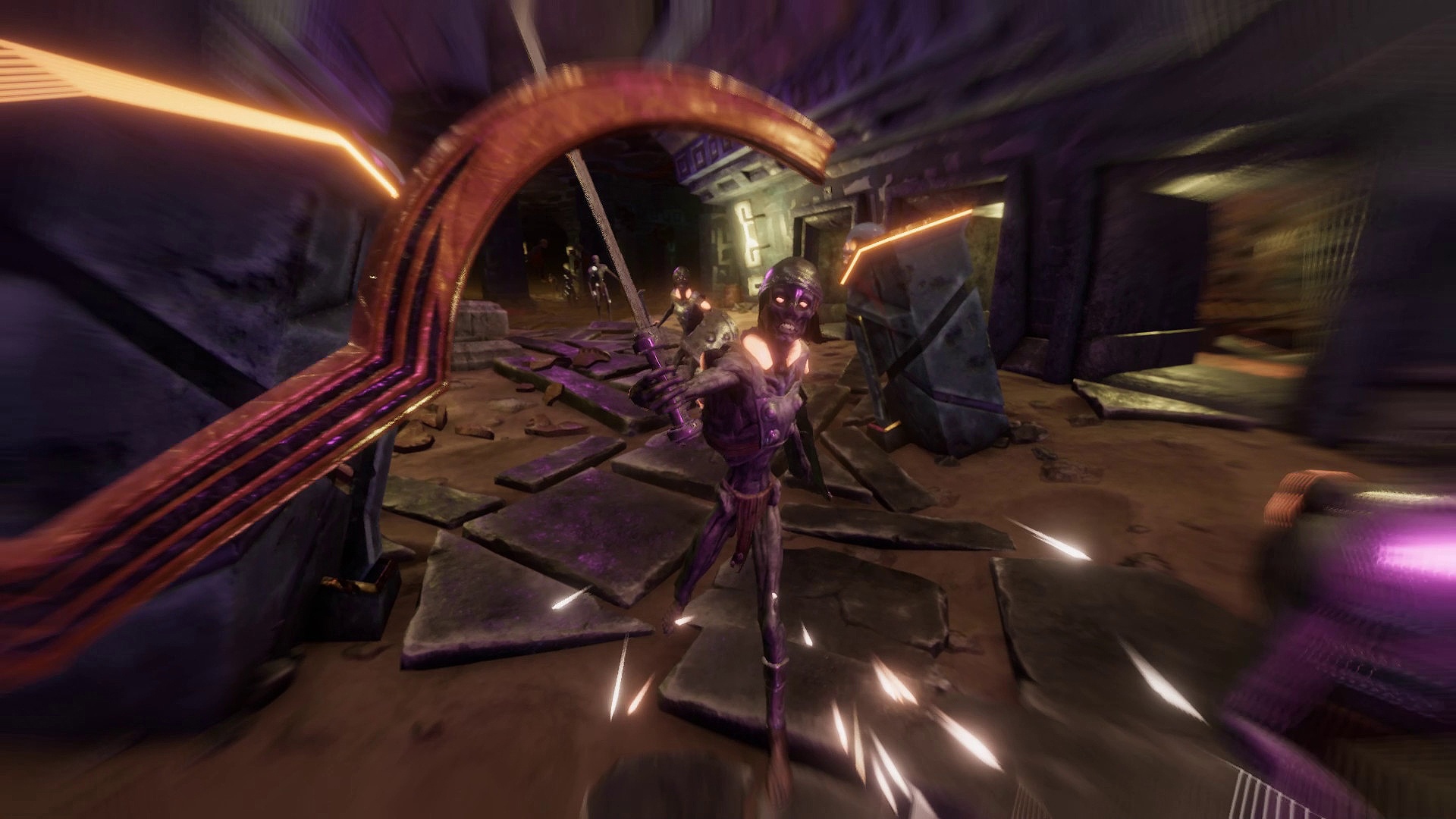 For the most part, the game is pretty fun, and it handles pretty well, but its core design has some underlying issues. The movement system in and of itself is pretty well done, and it accommodates the melee system and level design quite competently. Being able to run, dash, and climb small ledges allows you to exploit enemy patterns and dodge javelins, and the melee combat system reminds me a lot of the likes of Vermintide and Dying Light. The ability to parry and block enemy attacks worked on every enemy that I attempted, but in most cases, I didn’t even feel the need to do it. Generally speaking, you can pretty much avoid enemies by just moving around and cheesing them thanks to their lackluster AI and chokepoints in the level.

While the most basic enemies can be killed with a heavy attack of your weakest weapon, which is a sword, there are a few other variants that are not as easy. From agile jumping fighters to shield-bearing enemies, and wicked sewer monsters, the game shows promise in regards to enemy variety, but I sincerely hope that a lot more will get added in the future, otherwise, the game can get dull pretty quickly. On another note, Vermintide, a game which doesn’t really belong on the same genre but shares the focus on melee combat, executes it perfectly in my opinion. Most of the time you’re swarmed with the same basic enemy type (just like in ELDERBORN), but the key difference is in how the weapons feel. Both of these games have fast swinging weapons (like the katars), but they also have more bog standard swords and heavy maces, but despite all that ELDERBORN weapons feel dull, there is no satisfaction in hitting an enemy, and in a game like this, that can be its doom.

If there’s one thing that I don’t really like about the game, it’s the fact that there is no health bar. Instead, what you have is a regenerative health system, meaning that if you take damage, all you have to do is to stay out of harm’s way for a few seconds and you will eventually regenerate your lost health. I’m sure some people will like it this way, but for me, it feels it just makes the game a lot easier, since you’re out of a fight, you’re back to full strength, there are no real consequences in taking risks since you’ll just heal back up. 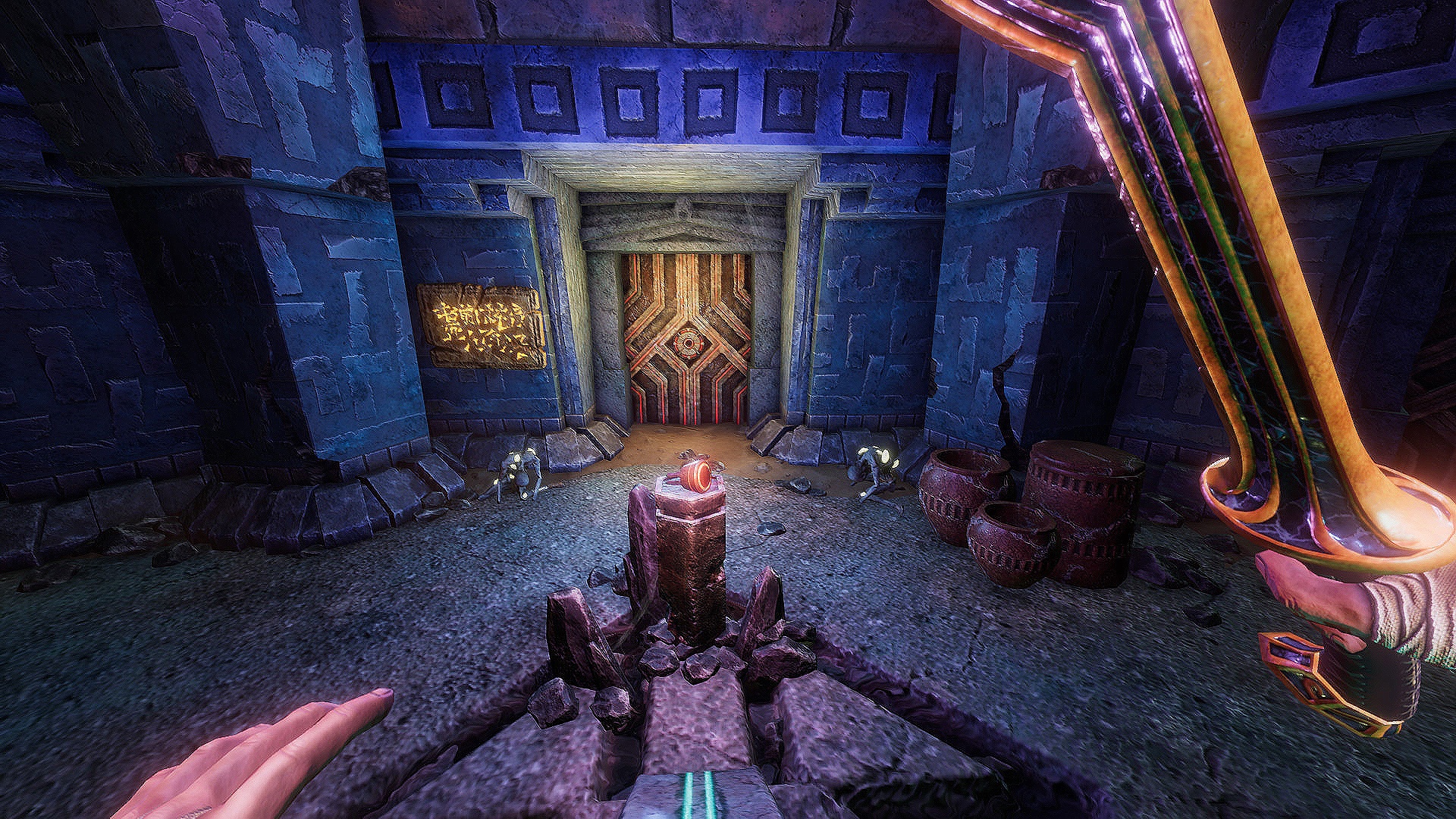 While the game is certainly a few years behind in the graphical quality department, it still boasts a pretty competent video settings menu, which is something you don’t see that often nowadays with all these Unity titles. With that said, my favorite feature is without a doubt the ability to set the field of view all the way up to 120. Even though the game’s graphical fidelity doesn’t live up to other indie titles in the genre, the art direction is certainly appealing a lot of times, even despite the fact that there were multiple occasions where the game just looked bland. While we’re on the subject of graphics, I’d like to point out that the game could use some actual optimization. For the most part, the game was jumping between 30 and 60 frames per second, and I can’t really figure out why. I’m pretty sure that the game isn’t that demanding, and I highly doubt that my system is at fault since I can easily play much more demanding titles such as DOOM at way higher frame rates.

Among the things that ELDERBORN does well, it’s the soundtrack. It’s absolutely enthralling, fitting not only the ongoing action but also the theme of the game like a glove. One moment you’re listening to this soft and mystical tune, and the next, once enemies start pouring out of everywhere, heavy metal kicks in and you start crushing bones and insects alike with the crushing power of your weapons. While I can’t praise the music in the game enough, I can’t really say the same for the game’s sound. For some reason, enemy sound effects seem to come out of the wrong side of my headphones, and it would often feel like I was hearing enemies behind me when they were in front of me.

Unfortunately, if you’re hoping this game would keep you company for a few good hours, I’m afraid you’re going to be disappointed. At the moment, you can pretty much beat what I assume to be one level in the game in just under two hours. ELDERBORN is clearly in dire need of content if its intent is to draw as many people as it can right now. However, the way I see it is that it currently is a proof a content, kind of like a demo. With that in mind, I wouldn’t really recommend buying the game if you’re craving for something new to play, only if you mean to support its development. With that aside, I do believe that ELDERBORN shows a lot of promise, but it still has a long road ahead before it’s fully polished and with enough content to keep people hooked.