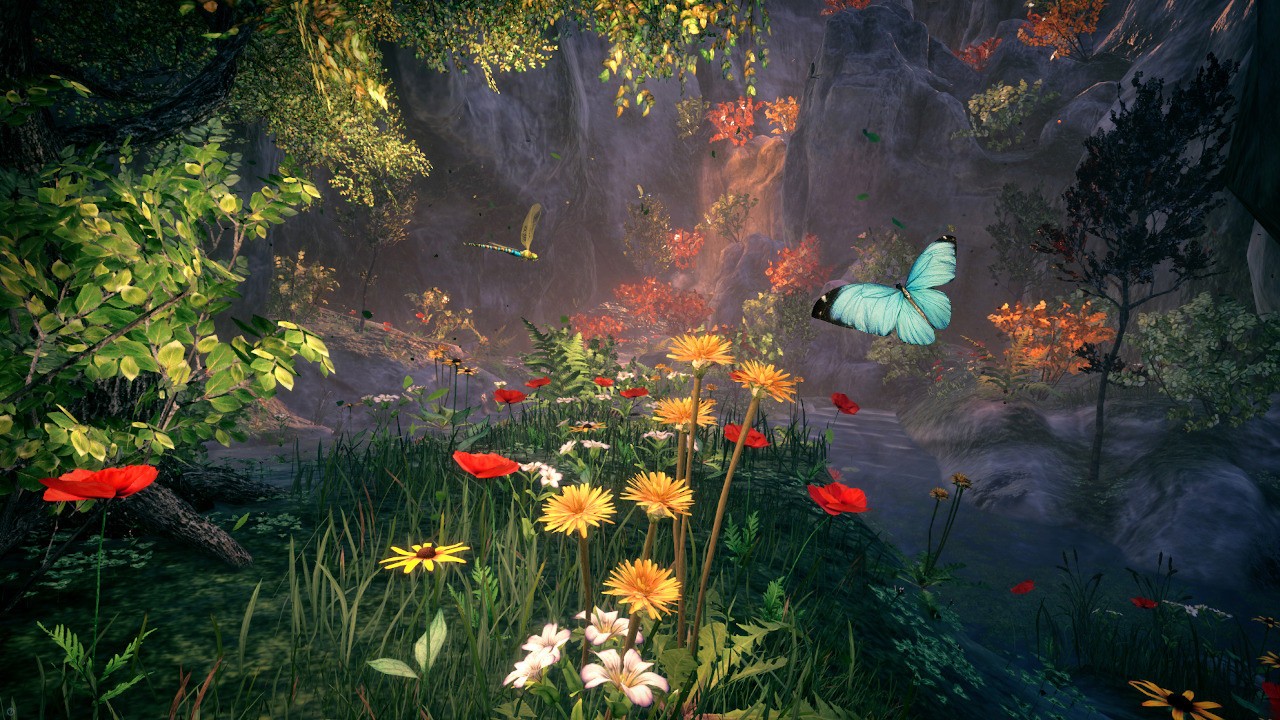 You’ve just got to love video game depictions through simulations. Their genre and styles can offer boundless variations from driving to flying and construction working to farming. If you really think about it, all forms of video gaming represents some kind of simulation from digital puzzles that recreate the activity books from our youths or quiz magazines that our parents or grand-parents indulged in to the modern warfare of the Call of Duty or Battlefield series of games. Some are technical, whilst others offer a more simplistic style to promote accessibility. Some are serious, whilst others take a look at the lighter sides of life. However, I don’t think within all of my time of video gaming, I’ve ever come across a simulation that is as unique as Varsav Game Studio’s Bee Simulator as it buzzes a release onto the Nintendo Switch.

You may think that a simulation which focuses around the activities of a bee may make a beeline towards a more arcade approach, but in fact, the game does a stellar job in educating the player to the life-cycle of the bee, their importance to the environment and the dangers that are posed to them through the actions of others and within the natural world. Despite its educational values though, the game still retains a focus on gameplay to produce a balance between seriousness and playability. As well as partake within a number of activities often associated with bees, the game also runs along a narrative to produce a story and a number of objectives that adds a touch to personality to your bee, its hive and the life that it leads.

The game begins with you encased within the larvae of your birth. From the safety of your hive, you then embark on a tutorial that introduces the main mechanics of the game from flying, manoeuvring, pollen collection and navigation. From here, you then present yourself to the queen bee, where she dictates the role of your being, starting with the job of a honey bee, before setting you free within the open-world of New York’s Central Park; albeit a more stylised version that is heavily inspired rather than portraying an accurate representation. The game does a good job of setting the scene and introducing you to the core mechanics of its gameplay, meaning that once you are set free into the big wide world, you can immediately figure out what needs to be done to embark on your life as a bee. 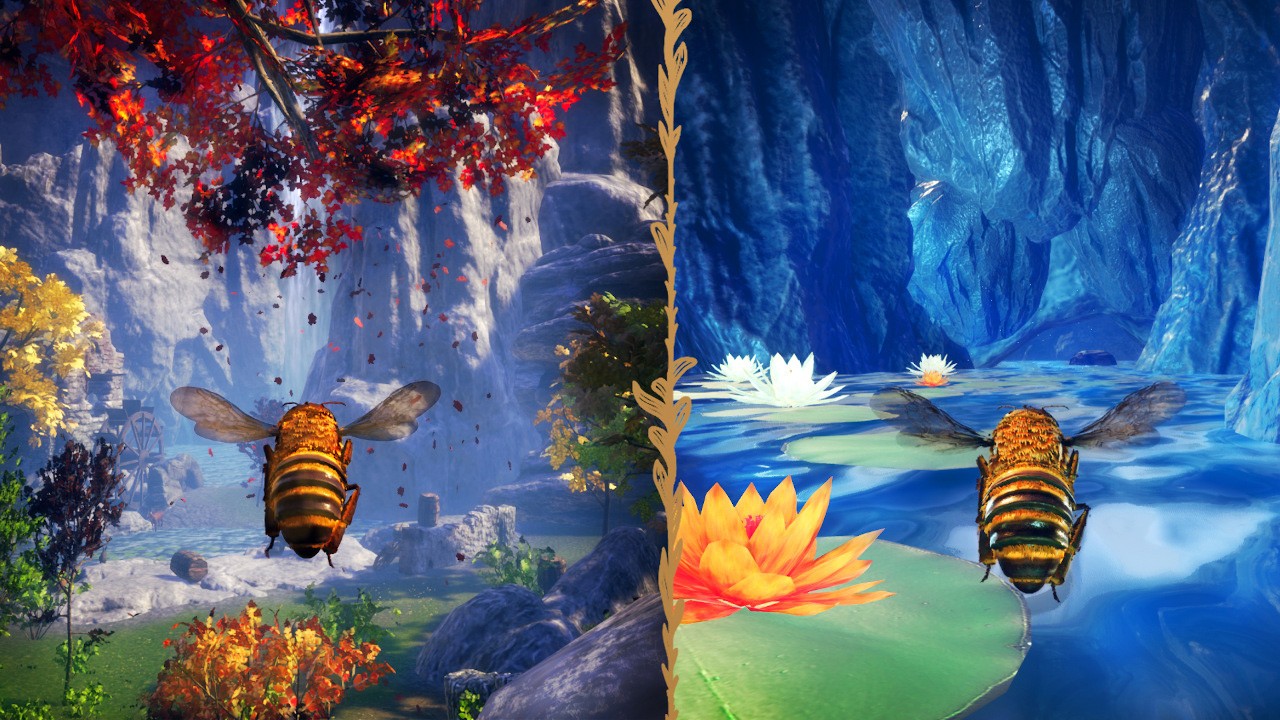 The main story arc revolves around the day-to-day life of your hive and the community of bees that work towards its survival; especially within the face of absurdity from the ever present dangers of the world around it. As you go about your daily life, you come across all manner of dangers that bees may face within the world, as well as combat the threat from the wasps and hornets who share the skies with you. You embark on a series of roles, from collecting pollen that goes towards the manufacture of honey to helping other bees within your hive that may be distressed to partaking within a series of races and fighting off the various enemies that you may come across.

It gives the game a more ‘adventurous’ feel as you follow a narrative, although the game also keeps a firm grip on its simulation roots. It does this by presenting a very effective sense of scale, from the ambience of echoed voices within the catacombs of your hive to flying around the park as you dart between fence posts, buzz through laid-out picnics and skit between the strands of spider’s webs. There are a variety of styles and elements that make up the overall game, from passing through colour-coded orbs that represent the grading of flower pollens to QTE and rhythmic combat and racing through a series of rings. Whatever your objective, an on-screen marker always highlights your waypoints and general directions of your next task.

One thing that the game does well, is to produce a nice laid-back experience that makes exploring the environment of the park an enjoyable exercise. Although in terms of open-world gaming, its area isn’t huge but if you take in the scale of a bee and the world around it, its playing environment is suitably sized. It’s all presented with some nice looking visuals that give a good representation of the bee’s viewpoint, although some character models are quite basic when compared to the physical attributes that comprise the park. It’s all complimented with a pleasing soundtrack that adds to the wonder of seeing the world through the eyes of a bee. 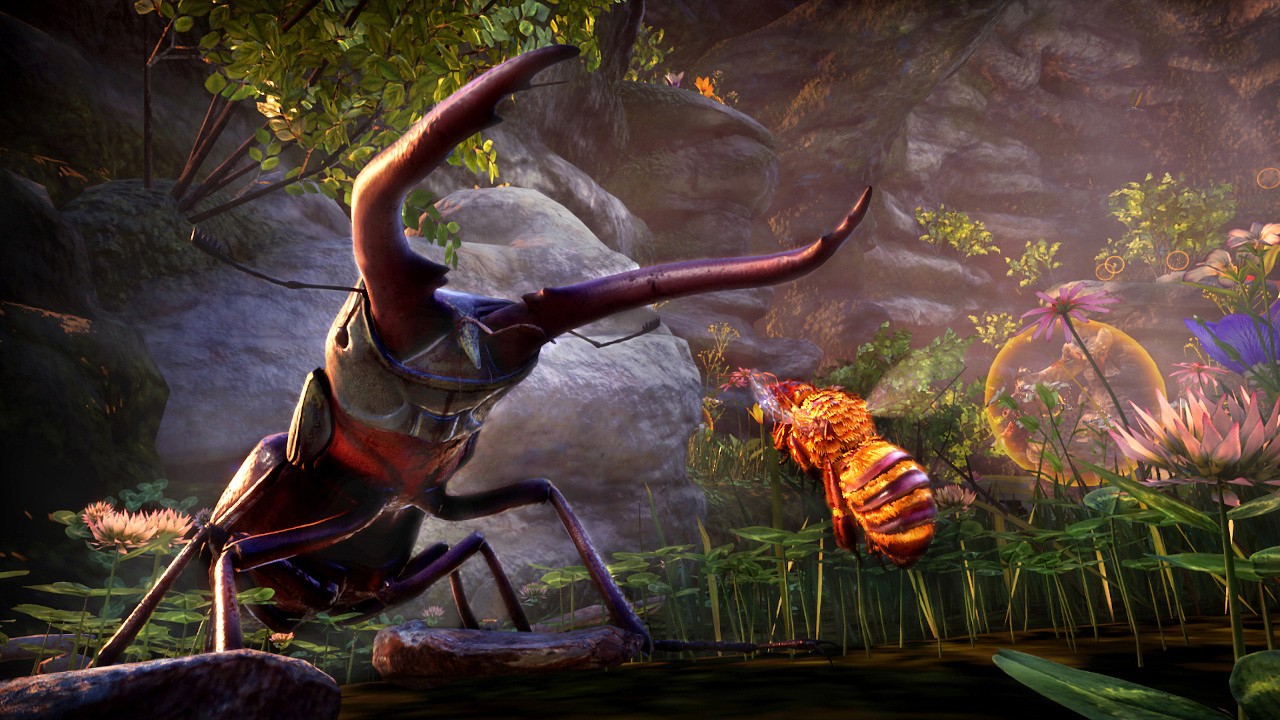 Despite the game keeping one eye firmly on playability, it does contain a few elements that promote more of a frustration than an ease of accessibility. Although its primary function is that of simulating the flight and life of a bee, its level of control can feel a bit off when you take your first steps, well wings, into your first flight. It misses a distinct smoothness in its movements, although admittedly, after tinkering with the options, I was able to find a sensitivity that suited my style of play. However, when it came to some the game’s tasks, I sadly wasn’t able to find a solution as easy as the control scheme. For the most part, the game’s tasks and mini-game style of objectives are easy enough to pull off, but when it comes to the series of events that task you with flying through rings, the game becomes so unforgiving that it borders frustrating.

It’s a shame that the game contains such an unforgiving element within its gameplay, as at its core, it’s actually quite an enjoyable game that educates you as you play it. An encyclopaedia of insect life contains all manner of interesting facts, some of which were even educational to me and the general premise behind the game’s narrative brings up the importance of survival and the battle against the elements of the environment. You can even unlock a series of skins for your bee that gives it the appearance of different species, as well as a few cosmetics that can add a touch of personality, such as hats and goggles. The game also incorporates a local co-op capability for up to two people through a split-screen. It doesn’t really bring anything different to the game, but is a nice inclusion nonetheless should you want to bring a friend along for the ride.

Overall, Bee Simulator is a quite niche and unique game, but one that does a good job of replicating the life of a bee, as well as educate the player to their importance within the eco-system; something that is vitally important within the modern world with the possible threat of extinction within a number of bee species. For the main part, the game does a great job at striking a balance between simulation and arcade gameplay; although some frustrating elements can bring the game down somewhat. Its level of presentation is superbly done though, with some nice visuals and great audio qualities. Despite its open-world settings though, its play area isn’t particularly huge and the overall playtime that the game offers is very limited, with the main campaign’s narrative being over before you’ve even got started. Despite all of its misgivings though, the game is utterly unique in what it does and seeing life through the eyes of a bee is particularly fascinating and guaranteed to get you buzzing.

Whilst it may not be as sweet as honey, Bee Simulator is still well worth a buzz.