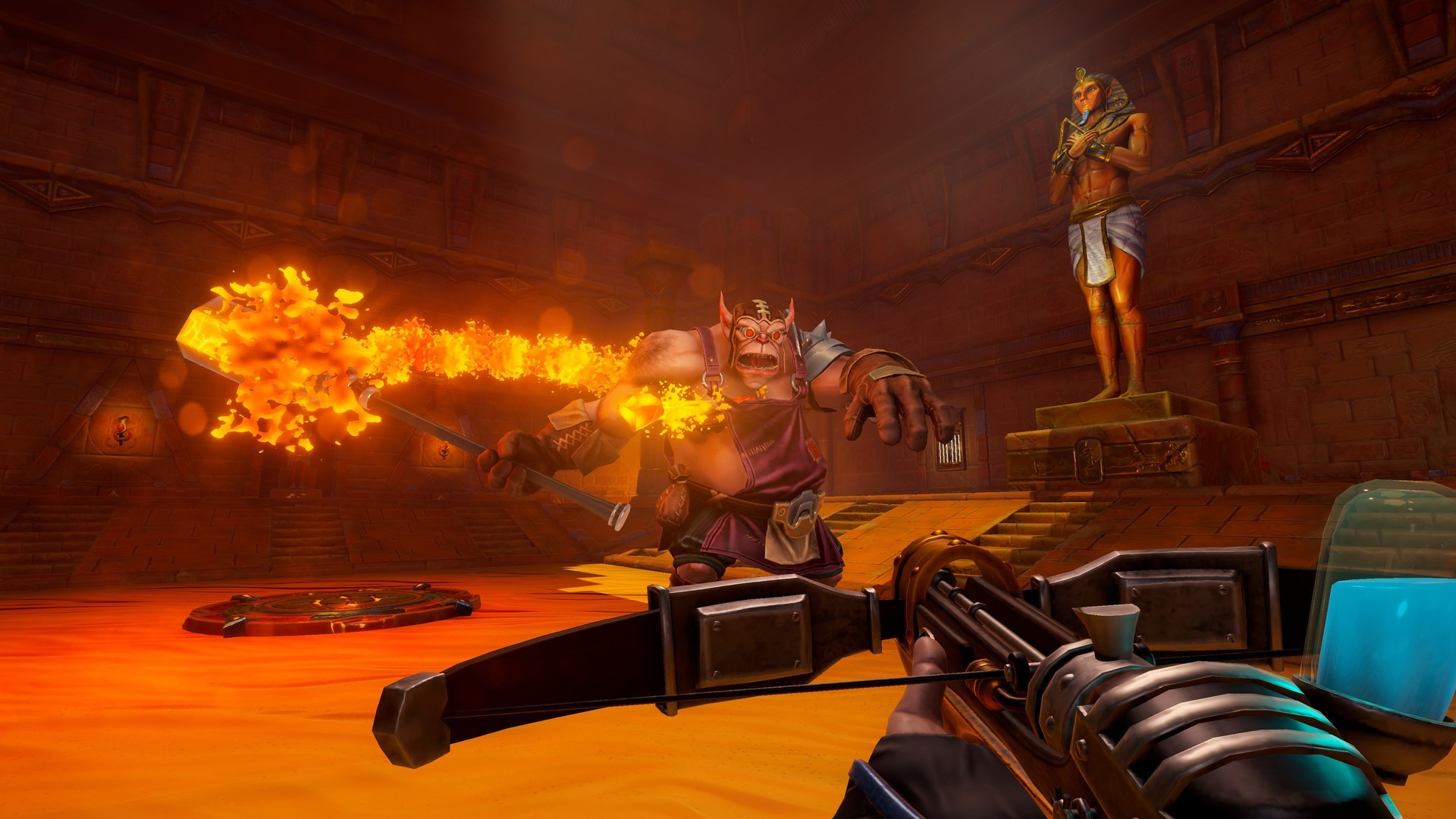 I don’t remember exactly when, but sometime during last week, as I was browsing Steam like I tend to do, to see if I find any game worth checking out, I stumbled upon Ziggurat 2 in the upcoming section. I’m pretty sure that the original, released way back in 2014, was one of the first FPS roguelites/dungeon crawlers to be released on Steam, but nowadays there are many more. In any case, while I did play the first game, I don’t think it would be fair to say that I really got to know it. It was recommended to me by a friend, I gave it a shot and although I liked it, I put it aside after just a few hours. With that in mind, I dove into the current Early Access version Ziggurat 2 hoping to see something new and exciting, something that would grab my attention for more than just a few hours.

The Ziggurat was a prison that housed many monsters and creatures who couldn’t be killed, but it also served as the final trial for any mages of the land that aspired to join the Brotherhood. Unfortunately, a civil war between the mages broke out and due to the ensuing maelstrom, the Ziggurat was damaged and its prisoners managed to flee and are now terrorizing the land. In Ziggurat 2, you play as a group of mages whose goal is to rebuild the Ziggurat, and so you embark on a quest to gather support and whatever else is necessary to accomplish that objective. So yes, contrary to many other roguelites and dungeon crawlers, Ziggurat 2 does have a storyline, even if it’s one that is merely based on exposition through 2D cutscenes.

Despite some shifts in design, Ziggurat 2 is still a roguelite FPS at its core. Players will go through a series of dungeon floors while defeating waves of enemies until they eventually reach the floor boss, which once defeated will allow them to proceed to the next level. As for the actual gameplay, I believe it’s still just like in the original, where you have four different types of weapons, your basic wands which automatically regenerate mana, staves, spells, and alchemic weapons, with each weapon type consuming a specific type of mana and having different alternate fire modes. The movement remains hectic and fast, just like its predecessor and I find that it perfectly fits the pace of the game.

The room design of the first Ziggurat was one of the biggest problems that I had with it, mainly because, most of the time, rooms were way too open and too flat, there was no verticality. Luckily, it seems that the developers have listened to feedback and this was one of the first things that I noticed when I started playing the game. There is a lot more verticality to the dungeons now and you not only traverse it by climbing up and downstairs, but you can climb ledges when jumping and even use jump pads. There are even some room modifiers like the Hatchery, where enemies are much smaller than usual but also a lot faster. However, it’s the verticality in particular that fits perfectly with the way that the game plays out, simply because you can move fast and dash to avoid enemy projectiles. 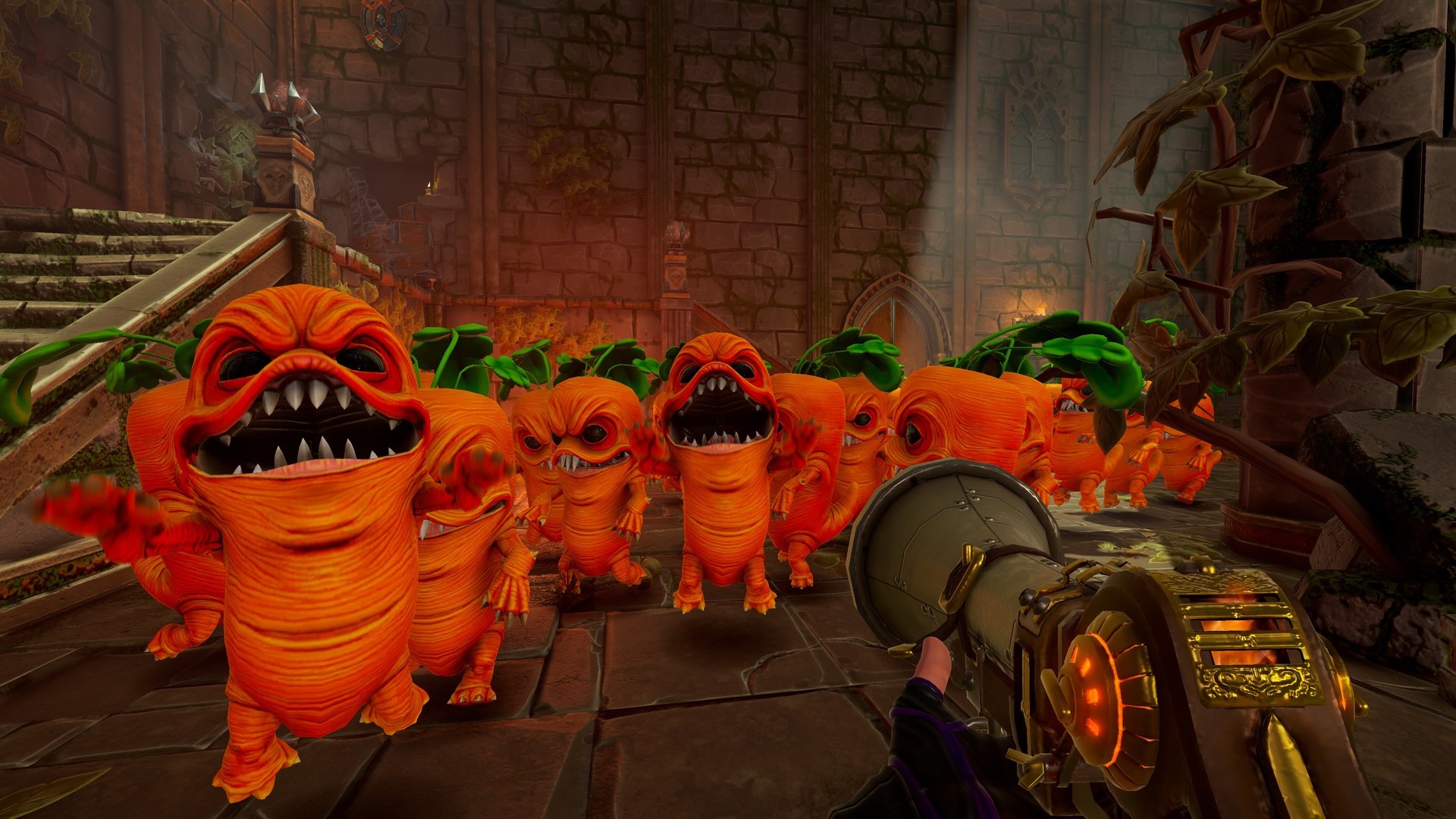 While there are different dungeon themes, from my experience, the enemy types still seem to remain more or less the same, having only slight variations. Still, it’s worth noting that there are 19 different enemy types in the current Early Access version. However, thanks to the room verticality and enemy elemental weaknesses, I find combat to be much more enjoyable this time around. The fact that some enemy types throw projectiles in an arc is particularly well done, as they can force you to come out of hiding when you’re in high ground. Despite everything, the enemy AI seems to be one of the weak points here, as enemies can both just stand still while getting hit or awkwardly move around, they don’t seem to try and use their numbers to their advantage by employing tactics such as surrounding you or flanking. For instance, the carrots are back, and they usually come in great numbers, but just tend to chase you and form a huge mob, which in some cases is quite easy to deal with because some of them explode when killed, thus damaging those around them.

Just like in the original, Ziggurat 2 also features a perk system that rewards you with new perks whenever you level up by killing enemies. Once that happens, you can choose one from two different perks. Besides the main bonus that you get when you pick a perk, you also get a small stat boost, like increased movement speed, health, or mana pools. Depending on your playstyle and how your playthrough is going so far, you can choose things that better suit you. I don’t think there are really bad choices here, as the game seems to do a good job in making sure that all the alternatives are worthwhile, even when there are already over 90 perks in the game.

In any case, the biggest change in the sequel is clearly the game’s progression system. In Ziggurat 2, before diving into a dungeon, you always start the game at the headquarters of your mage splinter group. Here you can check the laboratory and the map room. The map room serves as a staging area for your operations by allowing you to choose what kind of dungeon you want to run next. There are both main dungeons, tied to the game’s storyline, as well as side-dungeons. However, before you can embark on the story dungeons, you must first find their location by completing side-dungeons, but in the map you can not only see how long these might take you to complete, but you can also see how difficult they are and what rewards you’ll get upon completing them. Due to this structural change when compared to the previous game, runs are now much shorter since they function more or less like actual missions. Also, before each run you can choose your hero and what equipment you want to take with you. While it might sound good for you to choose what you’re most comfortable with, the game encourages you to take less equipment with you in exchange for finding more gold. 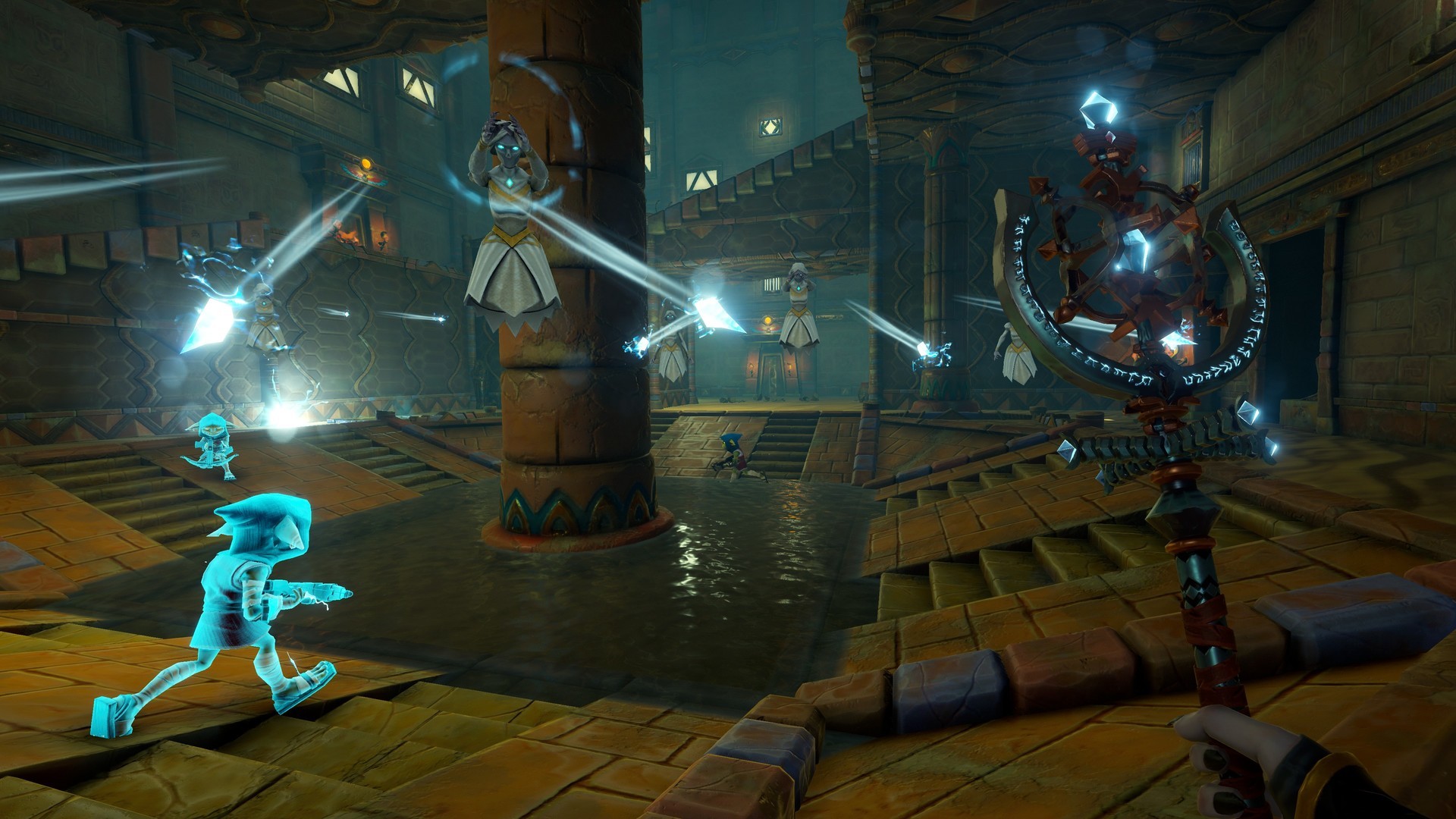 Meanwhile, in the laboratory, you can use gold to upgrade heroes, weapons and amulets, and you’ll unlock more of these as you complete more dungeons. These upgrades aren’t purely linear stat increases like more damage, there are also passive effects that slowly make weapons more powerful and useful. Although there is a decent amount of different weapons, just like in the first game, they feel underwhelming to use, they feel like they have no weight to them, they don’t feel impactful even though they might be dealing a lot of damage. There is no recoil or visual feedback when you use a weapon, it just kind of does its animation and sits there on the screen. Likewise, sound effects are also disappointing, especially when the music is pretty epic. At least the game is extremely pleasing to look at, mainly due to how colourful everything is, with enemies and all sorts of different elemental projectiles exhibiting different colours.

So, has Ziggurat 2 managed to keep me interested longer than the original? Yes, it has. I’m really into persistent progression systems, as it serves as an extra incentive to keep coming back to the game. Still, I’m sure some people aren’t really into that, as they probably prefer something more in the vein of the original game, where progression was simply tied to adding more variety to the game, instead of making you more powerful the more you played it. Still, there are five different difficulty modes to choose from if you just want to make the game more challenging or easier.

Like with every Early Access game, it’s important to not forget that the game is still in development, even though Ziggurat 2 already feels like an actual worthy sequel. There’s already a decent amount of content, but there’s also plenty more to add. This looks like it’s one of those cases where the foundation is already in place and once it gets ironed out, then adding content should be a lot easier. According to the Steam Store page, the current Early Access version features roughly half of the content that you can expect in the final release, so that should give you some idea of what to expect. If you enjoyed the original Ziggurat, then you’ll most likely love this one. On the other hand, if you have never played the first game, Ziggurat 2 should be something to keep an eye on if you fancy fast-paced FPSes or FPS roguelites with meaningful progression.