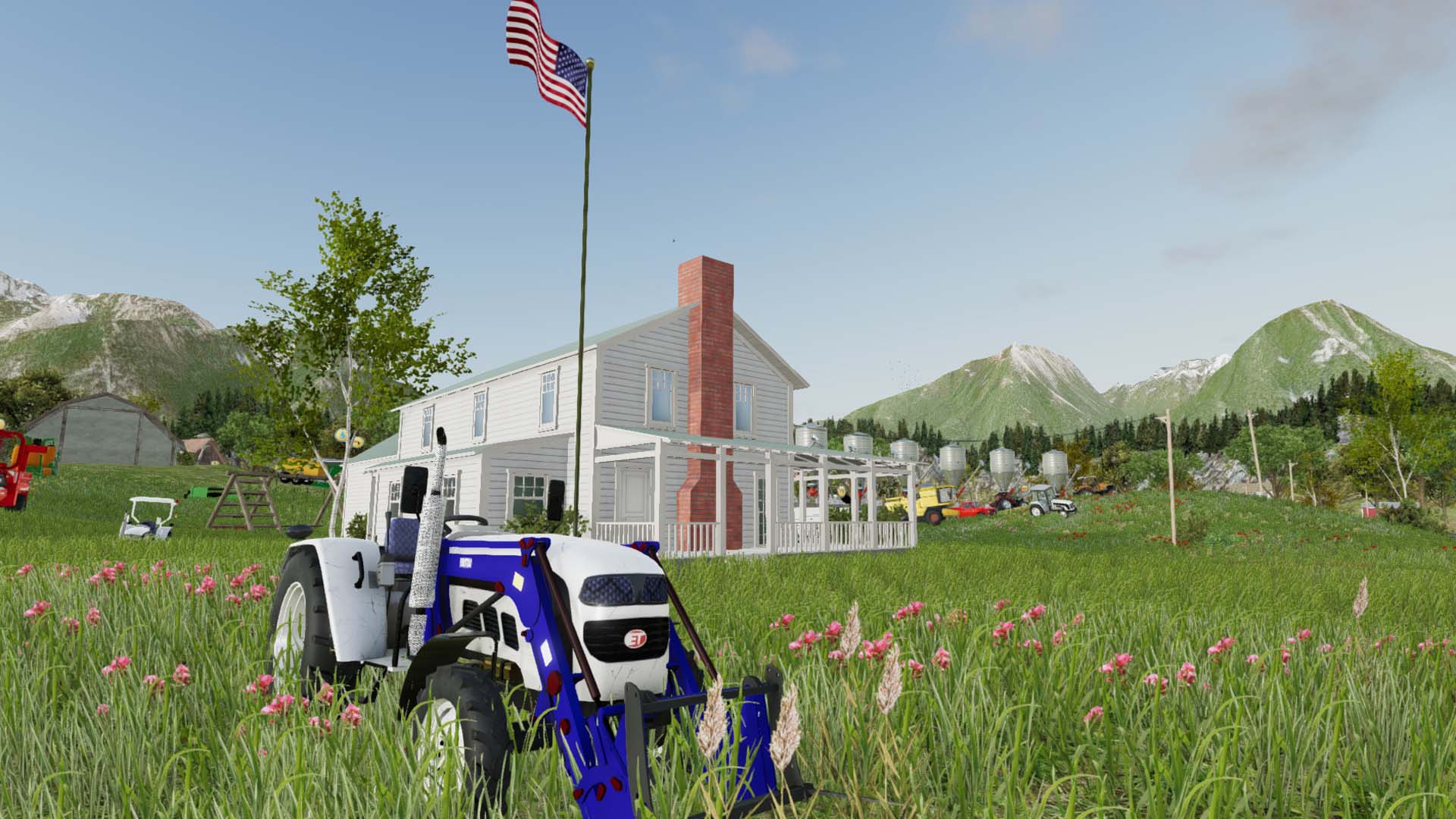 The release of the original Professional Farmer, by United Independent Entertainment GmbH, was only notable because it tried to jump on the back of the surprise popularity of the Farming Simulator franchise, but instead ended up as one of the worst games of 2016. Does the PS4 version of Professional Farmer: American Dream, a spin-off set in the Midwest, successfully save the franchise by making a decent farming sim? Sadly, far from it.

Starting up the game was a rather pleasant experience. I got to choose a profile avatar from a selection of cute animals (I picked the duck) while some quaint ‘American ranch like’ music played in the background. You’re then offered the opportunity to go through the tutorial. Knowing simulator games can be rather confusing I thought it would be a good idea. Fast forward almost an hour later when I finally managed to go through the tedious slog of ploughing, grubbing, fertilising and seeding my first field, just for canola, I was ready to give up.

Controls aren’t very intuitive, such as square being the jump button, but this is rectified by controls of your current vehicle being in the top left of the screen. Unsurprisingly the options menu was very bare. The only gameplay changes you can make are; the difficulty (easy, normal, hard); how long an in-game day runs – which ranges from 10 minutes to 24 hours; and some HUD personalisation which can’t save you from it being a cluttered mess. Graphics are particularly ‘budget’ looking, with finer details probably not being on the forefront of the developers to do list. 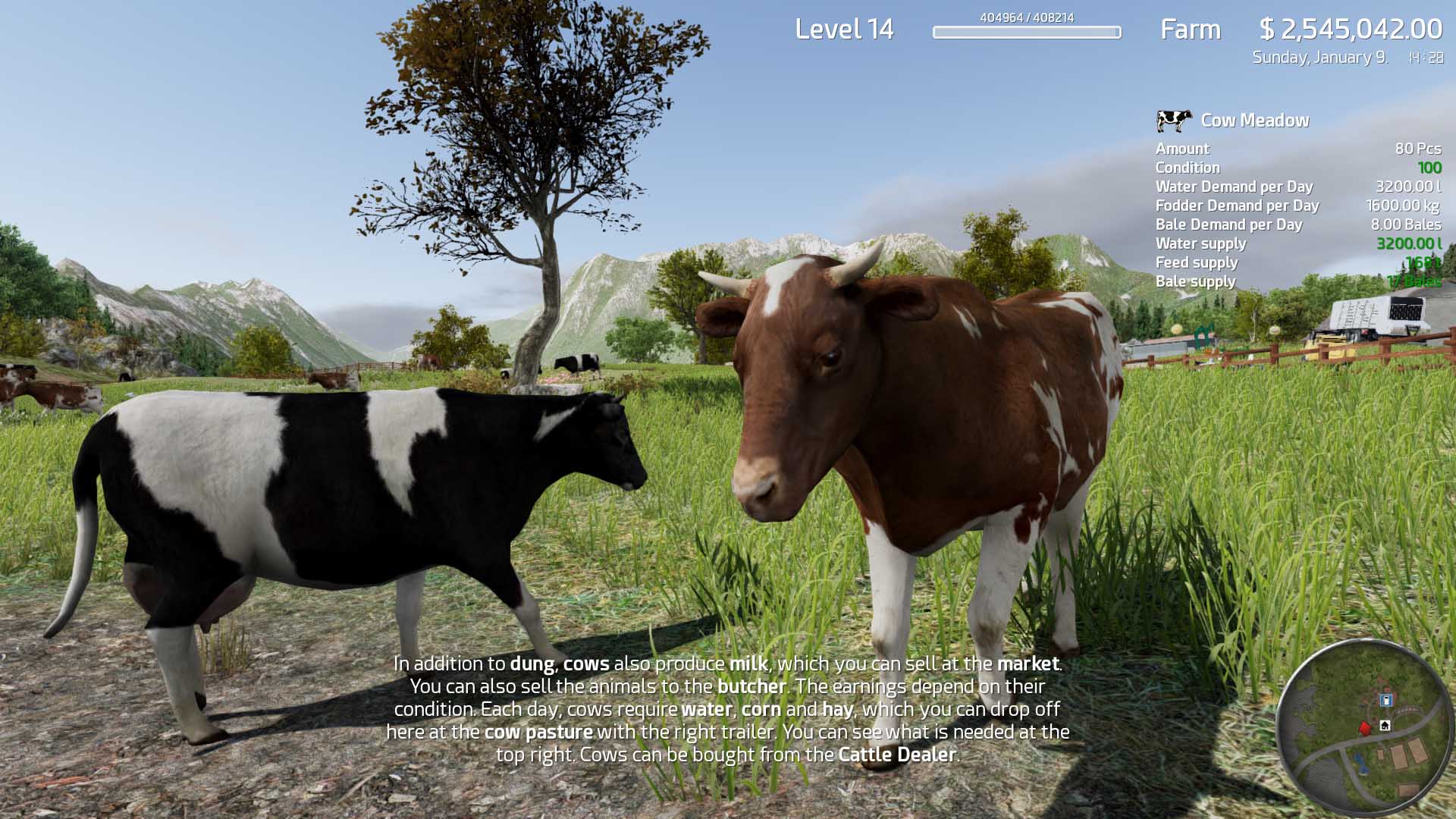 Performance issues include long loading times (somewhere between 20 and 40 seconds depending on the area), poor field of view with regular pop-ins and frame rate drops, even when doing something as crucial to the gameplay as ploughing.

First person perspective has a particularly odd feeling to it, almost like your character is very small or has eyes on his chest. Building sizes are off too, the townspeople all probably have neck problems judging by how small the door frames are.

There are four areas in the game: east farm, west farm, farm and town. All are bland and empty feeling. Even though there are cars driving around and people walking about there is a sensation of isolation. You have a dog on your farm that follows you around barking but you can’t interact with it and can actually walk straight through it. I ended up meandering around the town trying to get a response from locals but all I could manage was to get cars to beep at me after blocking up roads with my truck.

I was surprised by the inclusion of player levels. You start off at 0 with 1000 experience required for your first level up. I achieved this about 2 hours into the game after completing the tutorial and ploughing a couple more fields. This results in gaining a skill point which can be used on rather boring upgrades like discounts at shops and being able to wake up a little bit earlier. Your farm can also be upgraded which requires money, this is for simple things like bigger grain silos. 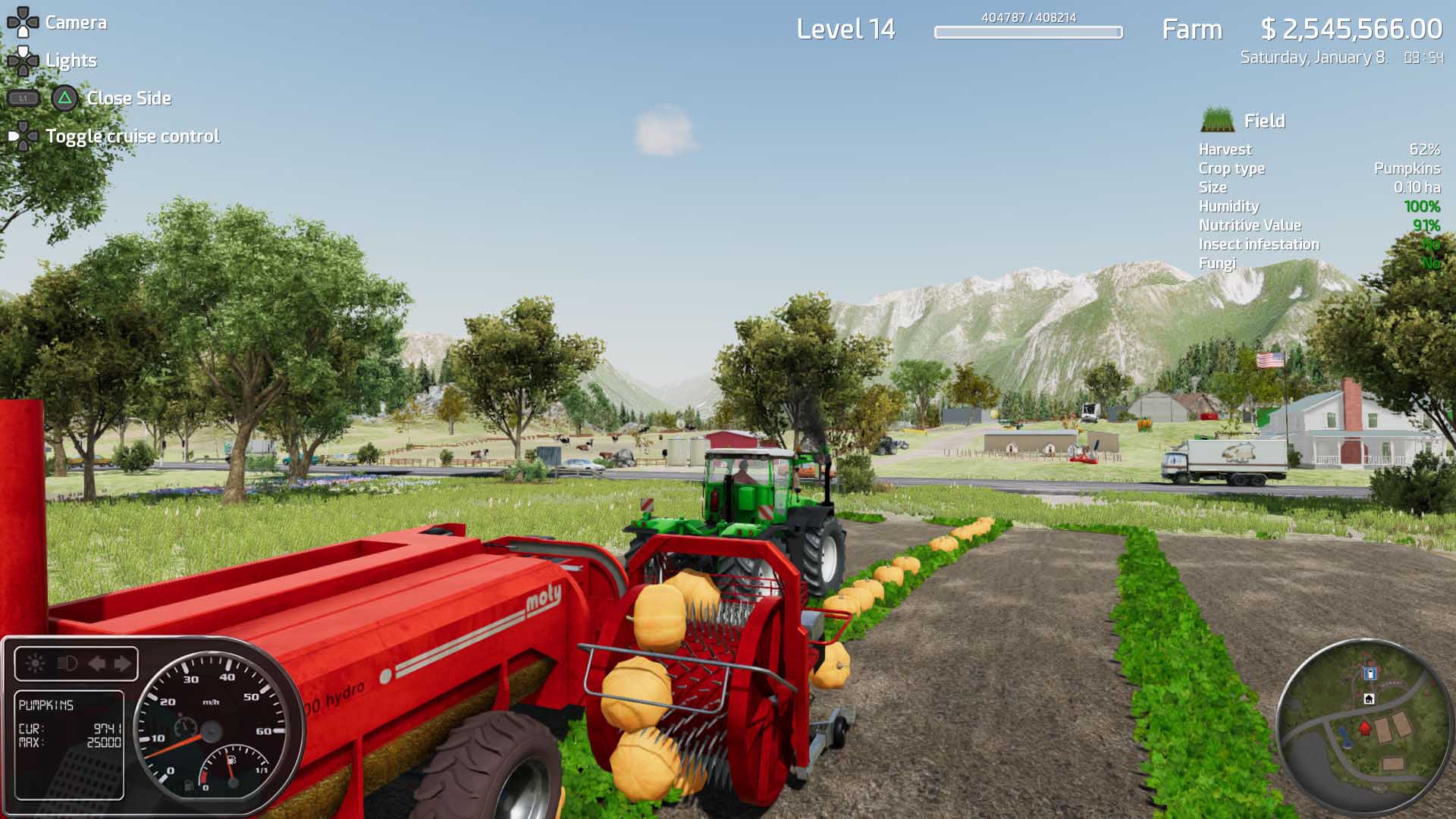 This brings me to the biggest issue with the game, a lack of purpose. Yes a lot of successful games are based on making money to spend to make more money, but when the main gameplay is tedious and repetitive, why would you want to reinvest your canola money on growing more plants. You start off with $200,000 and the only real goal seems to be purchasing all 29 of the fields available.

A listed feature for American Dream is the ability to grow pumpkins, but this is literally no different to growing anything else, only the look of the crops change. The setting of a ranch in the mid-west is an interesting one but the terrible graphics and heartless town don’t lead to any immersion – even the grass sways in a strangely uniform way.

Some fun can be found in trying out the different tractors and trucks, buying animals and growing the limited variety of crops. But in the end tedious and repetitive gameplay coupled with poor graphics, overall performance issues and a heartless world lead to an abysmal entry into an already dire game franchise. Fans of simulation games looking to try their hand at farming are better off sticking to the more enjoyable but average Farming Simulator series. While anyone new to simulation games in general are better off avoiding farms all together, for now at least.