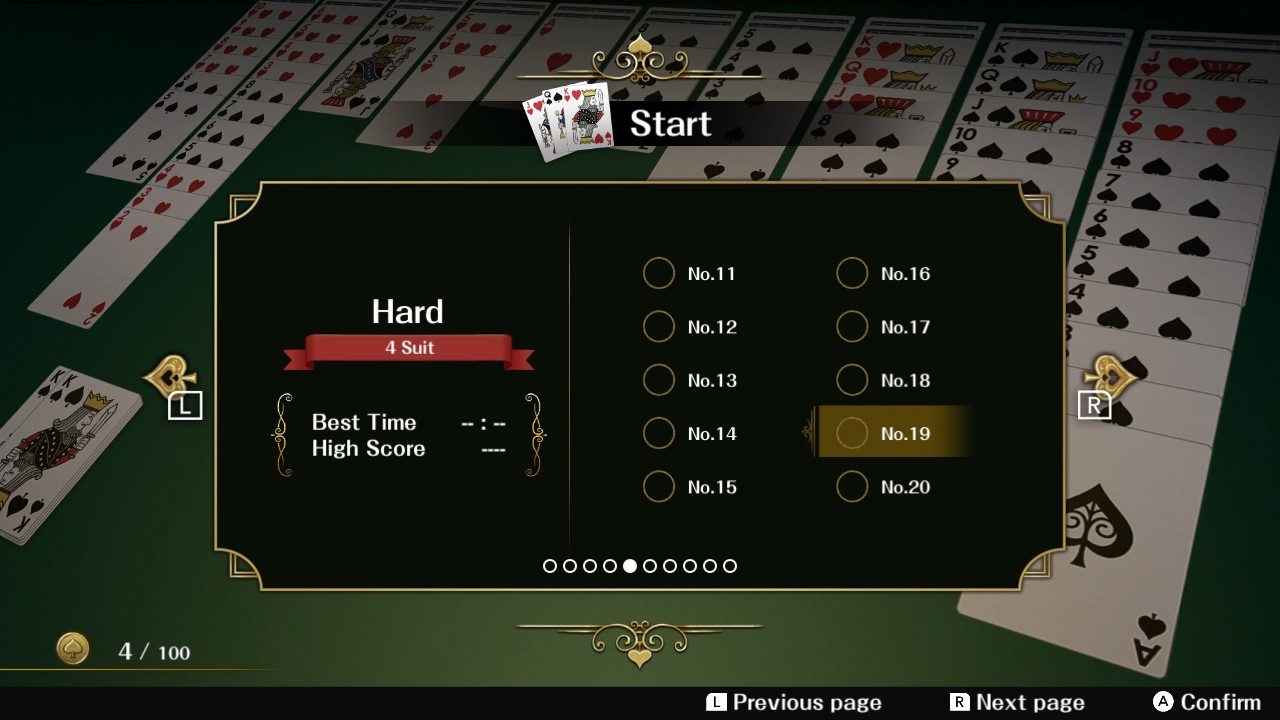 Think fast: what’s the easiest way to ruin an apple pie? Oh, there are so many choices! You could put it in the oven without turning it on and just let it sit until dessert time. You could blatantly decide to use Pepsi instead of baking soda and see what happens (I have no idea if apple pie uses baking soda). But wait, we’re forgetting the most obvious thing: don’t put in apples. Sure, you can call it apple pie, but when people dig in and taste Tide Pods instead, you’ll have totally fooled/murdered them. No matter how visually stunning the crust and the top are, no matter how well you balanced the brown sugar to butter ratio, if there’s no apples then the whole thing falls apart. And, if you’re playing a card game on the Nintendo Switch, there really only needs to be one big mistake to make the whole thing deeply unpleasant. Spider Solitaire F, the already weirdly niche version of the classic card game, took home the gold in “How could they mess this up” Olympics.

For those who don’t know, Spider Solitaire is an odd, almost reverse version of Solitaire that can theoretically be played with eight decks of cards, though why the hell would you want to. It really only exists in digital format, as you’re supposed to line up all the cards of a single suit, in order, from King down to Ace, to complete a set. You make eight sets, you’re a champion. Caveat: you can only move cards onto each other as long as they’re in descending order (so put a five on a six, or a four on a five, but not four on six).  Additionally, if you’re playing higher difficulty levels, you can put different suits on top of each other (abiding by the descending rule), but obviously the run doesn’t count unless they’re all Spades or Diamonds or whatever. You have eight stacks set out, and you can move absolutely any card into a blank space once you’ve cleared all the cards from it. When you’re out of moves, you deal in an additional layer of cards from a limited reserve that you have, hopefully bringing forward the crucial seven that you’ve been pining for. Get all the sets complete to declare victory, and see how your high score lines up with others, mostly depending on how much time you took. 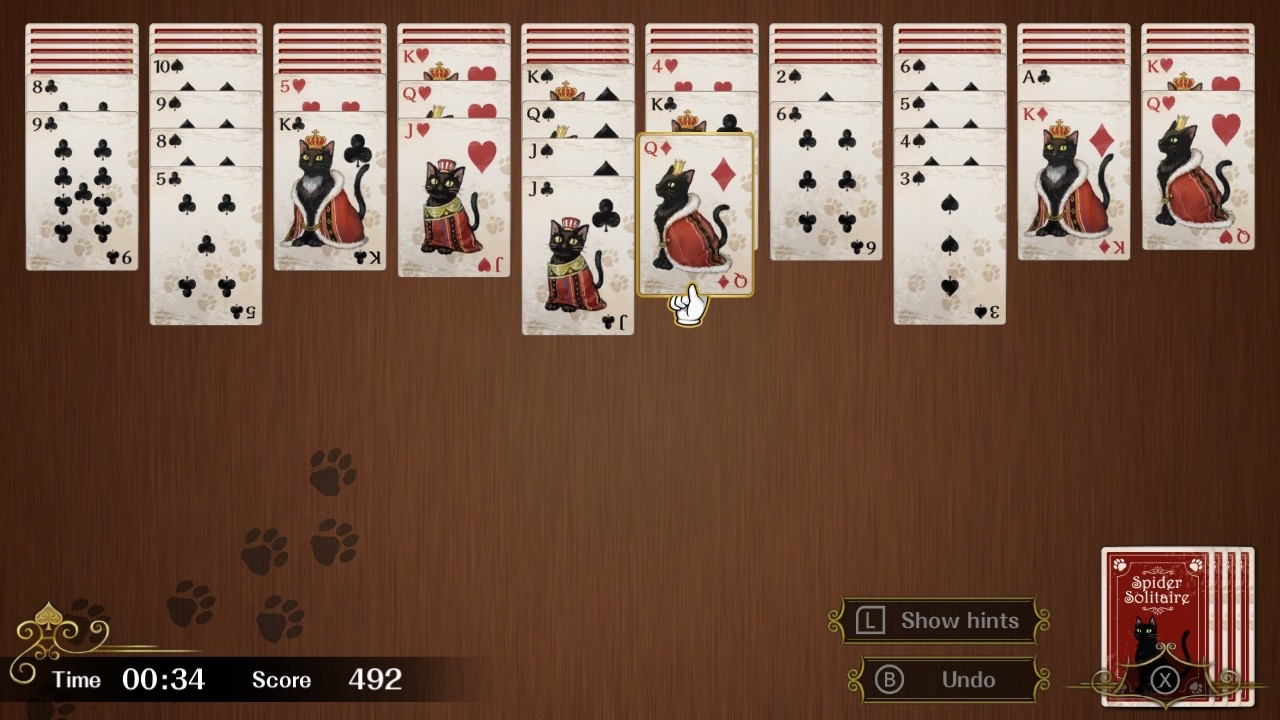 Now, I will say that FlyHigh Works, who has done this port and is planning to port more classic games in the future, seemed to think of many things to help make this game a success. Firstly, there’s incentive to keep playing, as you can unlock additional deck styles with the more games that you play. There’s one hundred preset levels of difficulty to get through, from twenty “Easy” modes (just one suit, Spades) all the way up to Hard (full suit mixes). There’s some surprisingly enjoyable jazz music giving you accents throughout the whole game, and I actually felt myself relaxing and chilling with the game once I got over some initial shock about the setup. Additionally, they’ve curved the options to make sure that you can play the game in a variety of ways. You can toggle hints on or off, allowing the game to tell you where you might be able to move (but never where you SHOULD move). There’s an auto move toggle to prevent cards from snapping to the next available space when you pick them up, giving you more freedom to choose how to play. And there’s a nice slider for cursor speed, letting the cards drift slowly between stacks of zip back and forth with unbelievable quickness. You can even have an endless sort of movement, as pushing left at the far end of the screen will shoot you over to the far right.

But all of these grand features are really undercut by the fact that there’s no touch screen controls. Now, you know me: when I really want touchscreen controls but they don’t necessarily fit in with the motif of the game, I can acknowledge that and grudgingly admit the standard controls are better. However, we are playing Spider Solitaire here. A card game. Moreover, a single player card game. If this was something like Go Fish or Poker, sure, let’s eliminate touch screen controls so that we can make sure players have good button configuration when playing up on the big screen against their friends. And if there were NO button controls for this game, I’d be confused because it would hamstring the ability to play it up on the television, however odd that choice might be. But this is SOLITAIRE. A game, by its very name, that you play alone. And when I’m going to chill and relax with a card game, I want to do it like my parents would: squished into the nook of the sofa, flicking at the screen, grateful that no one calls the house on Sundays. FlyHigh Works hasn’t given us the option, and I’m not totally sure why. 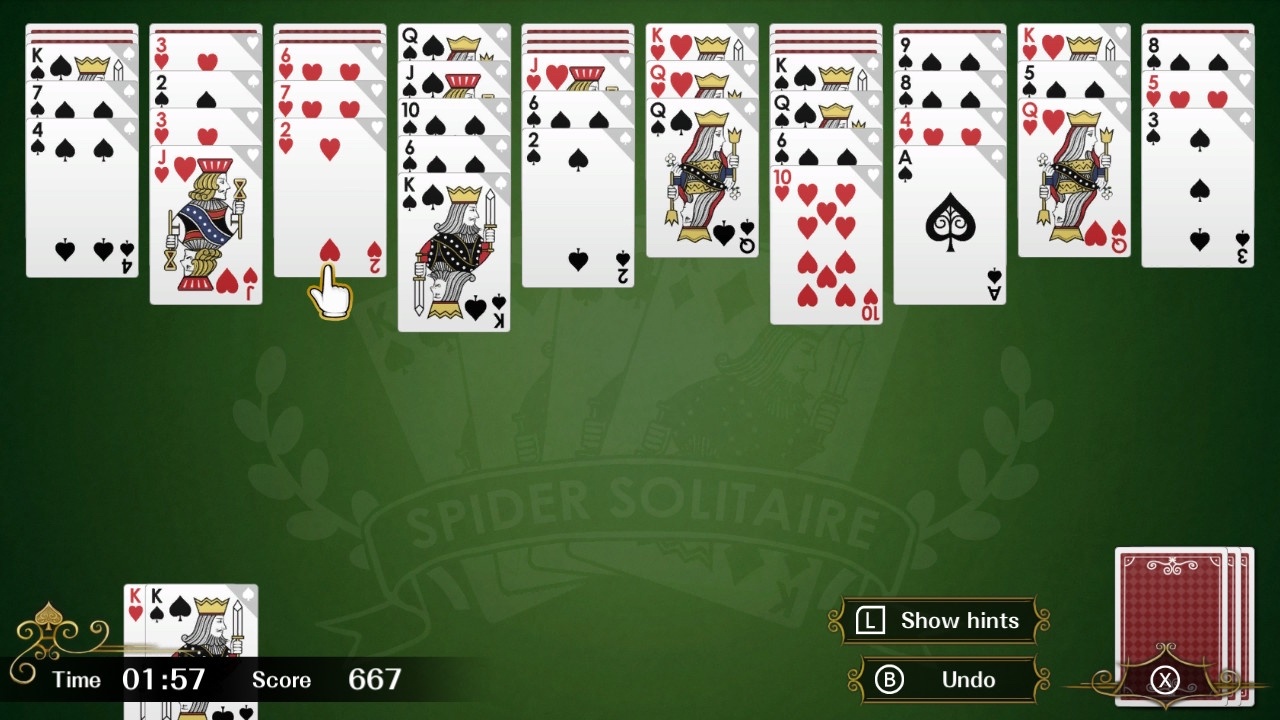 When you really get into the game, you aren’t moving a single card in Spider Solitaire F: you’re usually moving a stack of cards, sometimes ten at a time, from one place to another. This means you have to move over to the stack, then move UP the stack, then select it, then move it over to where you want it to go before confirming again. That’s potentially like 15 joystick/button presses before you finally get to where you want to go in a single move. Now, instead, picture touching and holding on a card stack that you want (and having no problem grabbing the right card because the Switch screen is huge), dragging your finger over to where you want it to go, and releasing. Boom. Done deal. As it stands, playing anything more than medium just becomes a massive chore in tedium as you have to often really sit down and flick between cards to get things arranged just right before dealing out an additional set and then fixing that new mess. I can’t believe that it took me over 30 minutes to play a single match of Medium difficulty, and I didn’t even enjoy myself.

The whole experience with Spider Solitaire F smacks of disappointment. I liked the visuals, the music, I actually quite enjoy the game itself, but the interface just ruined the whole thing for me. I want to be able to just kick back when playing a solitaire game, not feel my Nintendo Thumb coming back in spades after years of recession because I need to move some cards around. Sure, the Undo button might need to be pressed by, well, a button, but would it have been too bad to map the damn thing to the picture on the screen? I mean, there aren’t any secrets, the hint, undo and deal buttons all have visual representations on the screen, just map touch screen controls to them! I fully support FlyHigh Works bringing more casual games to the Switch, because they’re damn fun and should be enjoyed, but not if they’re going to leave out the simple things that make the games fun. If they add touch screen controls, I think it’ll be a hit, but, as of right now, it’s just another addition to the eShop’s growing masses.