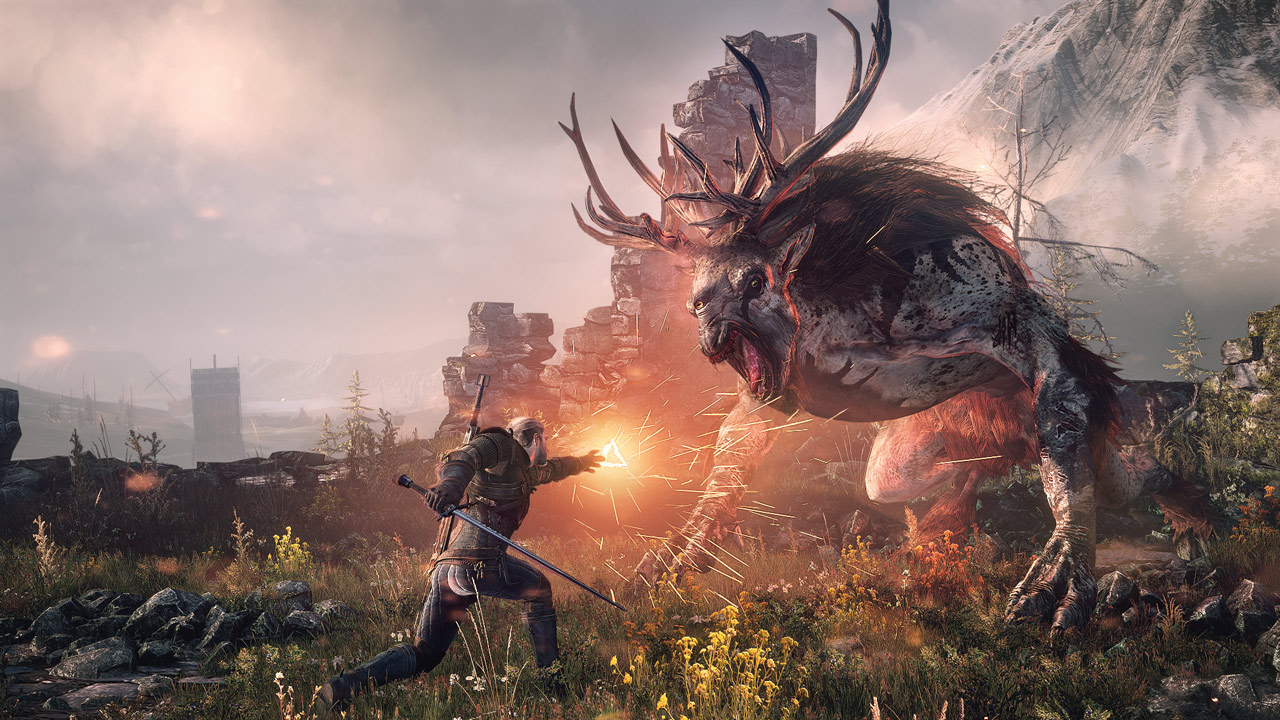 The Witcher 3: Wild Hunt, CD Projekt Red’s opus magnum released on May 19th 2015 to an astounding response from critics and players alike. The developer originating from Poland started as a PC game distributor and then later moved on to making the Witcher series, based on Andrzej Sapkowski’s novels. The first two games although successful never reached the success that the 3rd did selling over 30 million copies worldwide. This installation is meant to be the end to Geralt’s (the main protagonist) saga, but not the end to the series and one of, if not the best RPG of all time in CD Projekt’s eyes.

The game starts with a beautiful cutscene where part of the beginning story is shown as Geralt traces back Jennifer’s footsteps (one of the main love interests in the game and also the novels.) and then seamlessly transitions into in-engine footage as Geralt dreams about his adoptive daughter Ciri who’s also on the run. This section introduces us to the game’s main antagonists: The Wild Hunt and to the fact that most of the game will be spent trying to retrieve Ciri. Speaking of the main story and narrative The Witcher 3 does an exceptional job at story-telling with every character’s background fleshed out and the series’ lore mainly taken from the novels with some additions from CDPR. Each quest feels unique and the lack of fetch quests or any of the stale overused RPG traits make the quest design truly one of a kind. The example that a lot of people give to describe this game’s quests is The Bloody Baron quest which could be a separate game in itself length and narrative wise, but I’d also like to mention one of my personal favorite quests which is Brothers In Arms. In this quest or rather quests, as this particular one takes place in all of the game’s regions in parts, you gather your past allies to aid you in war against the main antagonist. This stood out to me as it was built up like a full saga before the actual battle took place in Kaer Morhen (One of the game’s main regions/sections). Now that we talked about the story elements, we can move on to the other parts of the game.

First of all, I’d like to start with the graphics, I played this game on the PC and I have to say even though it’s a 5 year old game it looks absolutely stunning, especially with some HD mods that are available these days, but even with the vanilla version you’re getting a gorgeous game. The animations for the characters are one of a kind, you might find a couple of glitches or bugs here and there, but by now most of them were patched out. Geralt’s animations, especially in combat or while moving, look really natural and pleasing. Compared to today’s best looking games it obviously doesn’t hold up the best, but it’s still a very good looking game.

Gameplay and exploration wise the base game is divided into 5 main regions being: Velen, White Orchard, Novigrad, Skellige and Kaer Morhen. Each of these regions is an open world with so much to explore in it. You spend most of your time in Velen and Novigrad and in the later game, Skellige while also travelling to other magical realms for one-off quests. The exploration is done mainly on the back of your loyal companion horse Roach, but there’s options to fast travel between all locations discovered by Geralt through fast travel points all over the map. The game thrives in exploration and that’s where it’s at its best, even though the quests have markers that define a certain path for you to take; exploring on your own is hugely rewarded because finding treasures and plenty of other interesting things in the world is a main selling point in my opinion. Even the side content or the little details that you encounter have meaning and they all add to the main narrative. A lot of people feel that the UI is a little too clumped up and that it doesn’t give you a hands off approach to exploration, but blocks too much of the screen and makes the game way too easy for players who just follow the beaten path, but I find that’s not the case as the UI is quite helpful and the quests are designed so that even if you wish to disable it, the NPCs give you enough directions for you to find the path on your own. 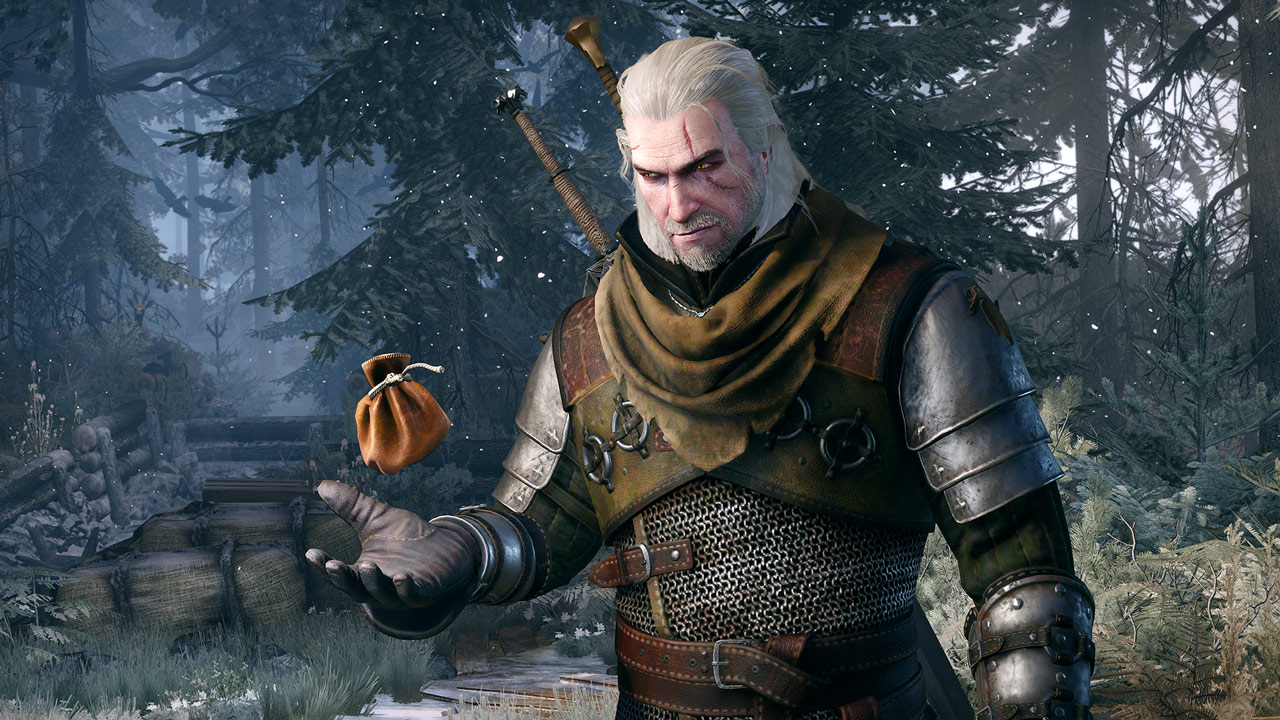 Now let’s look at the main issue that is presented in the game, the combat. It works as you would expect for the most part, your standard real-time combat that a lot of RPGs have. The controls are a little clunky at times when moving around or attacking, but for most of the game they’re bearable and you get used to them. Geralt can attack using his swords, a silver one (used for monsters) and a steel one (used for humans/bandits) and perform both a quick and heavy attack. He can roll in order to evade attacks from some of the bigger foes as well as dodge to evade smaller scale attacks or block them outright. In addition to this The Witcher introduces Signs (basically spells used by Witchers) which include: Axii, Quen, Yrden, Igni, and Aard with the most prevalent being Igni, a fire attack that can be upgraded later on in the game (like all the other signs) to be much more powerful than the base version. These signs, whose effects vary from pushing back enemies, to slowing them down, to even creating a shield for Geralt to fend off enemy attacks rely from the stamina bar which is depleted when you use them or when you run around for a long time. They offer huge gameplay variety and are core components of the game. The game also has an adrenaline bar which is filled up when you land strikes to the enemies and lets you perform critical hits faster and easier. Apart from his classic swords, Geralt can use other types of weapons found around the world and there’s weapon classes that show you how powerful a weapon is and how much damage it does. Some of the weapons can be further improved with runes that give the weapons other effects like burn damage, poison damage, etc but a lot of the weapons also have external effects included with them.

Apart from his weapons, Geralt can get full outfits that offer additional protection against monsters and other foes or elemental damage. There’s a very in-depth upgrade system that lets you upgrade a lot of your skills through upgrade points earned through levelling up or specific locations in game. This lets you improve your stats dramatically, improving your sword and melee attacks as well as your signs like previously stated or even your HP. There’s a separate branch just for the Crossbow, a weapon that you get at the start of the game but barely use except for some underwater sections. You can mix and match these skills through the mutagen system for an even bigger boost to your stats.

The enemies that you face in the game are mostly all unique, with few exceptions that might be reskins of another type of enemy, they vary from Drowners (humanoid like creatures) to full on beasts like The Fiend or The Griffin. Their designs and attacks keep the game fresh and there’s even a full Beastiary in the game that lets you read more about the lore that they’re based on. Gameplay wise they’re quite easy to evade on the lower difficulties and battles don’t last that long and don’t require much preparation but seeing creatures from another folklore like the Polish one can be quite fascinating.

The Witcher fans will also recognize the crafting system which is a big part of the previous Witcher games and lets you craft potions to aid you in battle by healing you, giving you temporary stat boosts or helping you fight against specific monsters. This is where the biggest issue with the game lies. Even though the crafting systems in general are really useful, in lower difficulties they’re not necessary to be used at all, which is why I really recommend going through the game on The Death March difficulty (hardest one) to get the full experience, preferably on a 2nd playthrough. I’ll explain why the game deserves a 2nd playthrough in the upcoming paragraph, but overall I think that even with this minor issue the combat system and movement although at times hard to control are still fun to pull off, especially with Geralt’s animations being really top notch. 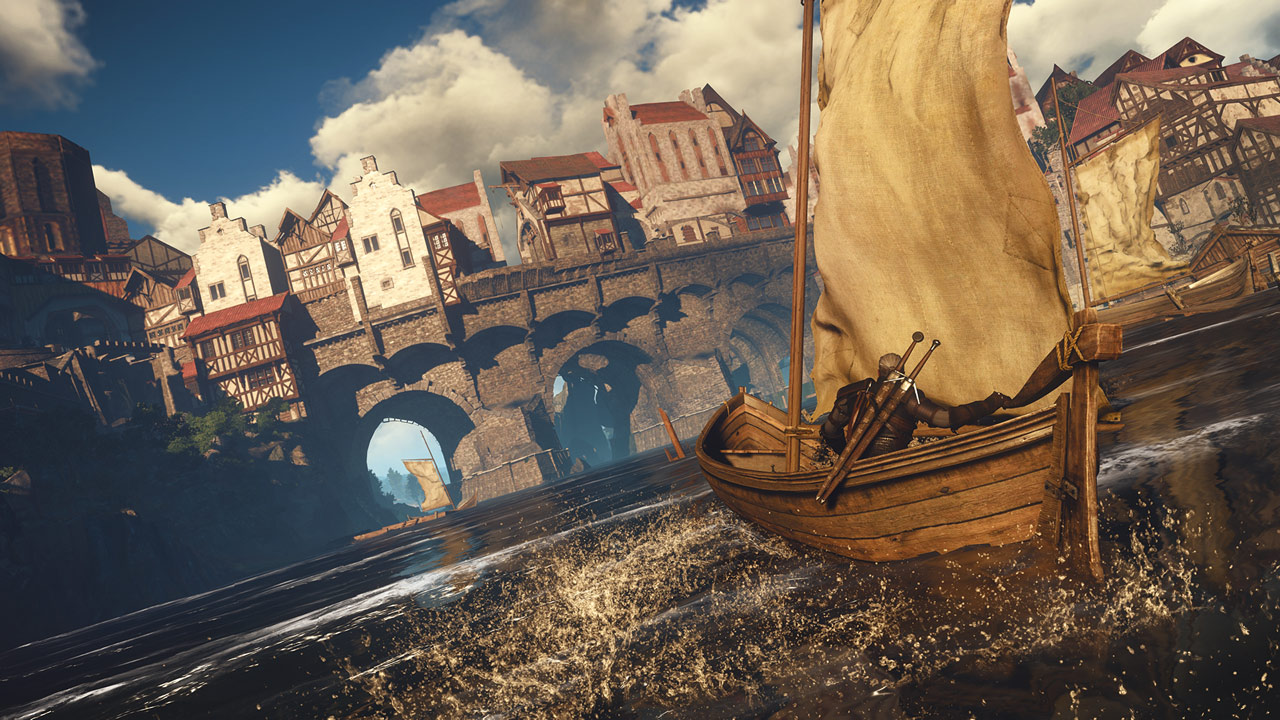 Onto the replayability, The Witcher 3 is one of those RPGs that you’d want to pour hundreds of hours into and go through several playthroughs with. The main reason for this being is that, unlike a lot of other RPGs nowadays, choices in The Witcher 3 effect gameplay in a huge way, with characters remembering your actions very well and allying or going against you, depending on your choices and the way you talk to them. The dialogue is really fleshed out with options that advance the main story, as well as some that explain the background details available with each interaction. This lets you play the game multiple times and see different results on every interaction that lead to completely different gameplay scenarios. The choices also affect the ending drastically with 3 main endings and countless versions of them that differ from one another. On top of that, the game even features New Game+ to further incentivize you to play through it again. The replayability is truly one of the best parts of the Witcher 3.

Finally, the sound design is also really great, the sound effects are really well made and aren’t at all out of place in the game. In fact, I think the sound design in this game makes you really get immersed into the world. As for the music, it was composed by Marcin Przybyłowicz and features some really authentic Polish folk music even containing some truly great battle themes.

In conclusion, I feel that this game is really one of a kind. Its strong points are mostly its story and narrative choices that do an amazing job of immersing you in the game world. The open world is huge and very expansive, but it’s a blast to go through and explore. The characters are all very well written, the enemies have unique designs of their own and even Geralt is a very complex character. I’ve seen this game being compared to other RPGs like Skyrim, but I have to say it very much stands on its own. Of course it’s not perfect and has some flaws like, for example, the difficulty of the combat being quite low and some of the elements like the crafting not needing to be used but these decisions were made to streamline the game to a broader audience and in comparison to its merits, this game does way more right than it does wrong. I’d consider it a masterpiece by today’s gaming standards and one of, if not, the best RPG of the 2010s.

The Witcher 3: Wild Hunt, CD Projekt Red’s opus magnum released on May 19th 2015 to an astounding response from critics and players alike.