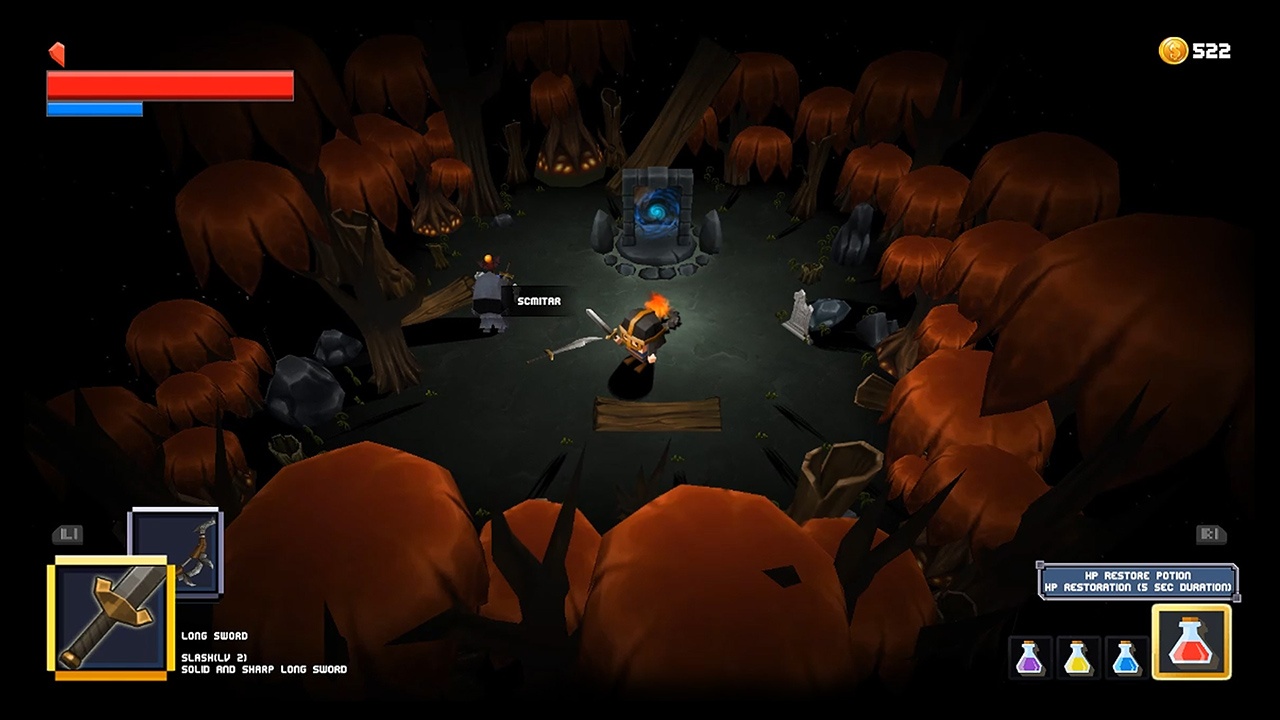 You play as Mr Cube who gets married and is quite content with life. He goes to the pub where a stranger offers him a pill which he takes. Mr Cube then wakes up in some weird alternative dimension in which he must try to find the exit. There’s not much more in terms of story, but it’s an intriguing start. Luckily, Mr Cube wakes up and has a simple weapon to begin with and this is where it’s get mildly interesting and innovative. If you die, you are resurrected and come back with differing stats and a different, possibly more useful, weapon.

Survive! Mr. Cube is very similar to Rogue, but a much lighter version. It’s a twin-sticked mechanic, so you use one to move and the other to striker/shoot from a top down perspective. The main idea is to find a portal to another area which will hopefully bring you closer to the final boss, however, sometimes there is more than one portal to find and some are dead-ends, so you need to retrace your steps. Luckily Survive! Mr. Cube tells you how many portals are available within an area, but it doesn’t tell you where; you need to do the exploring yourself. 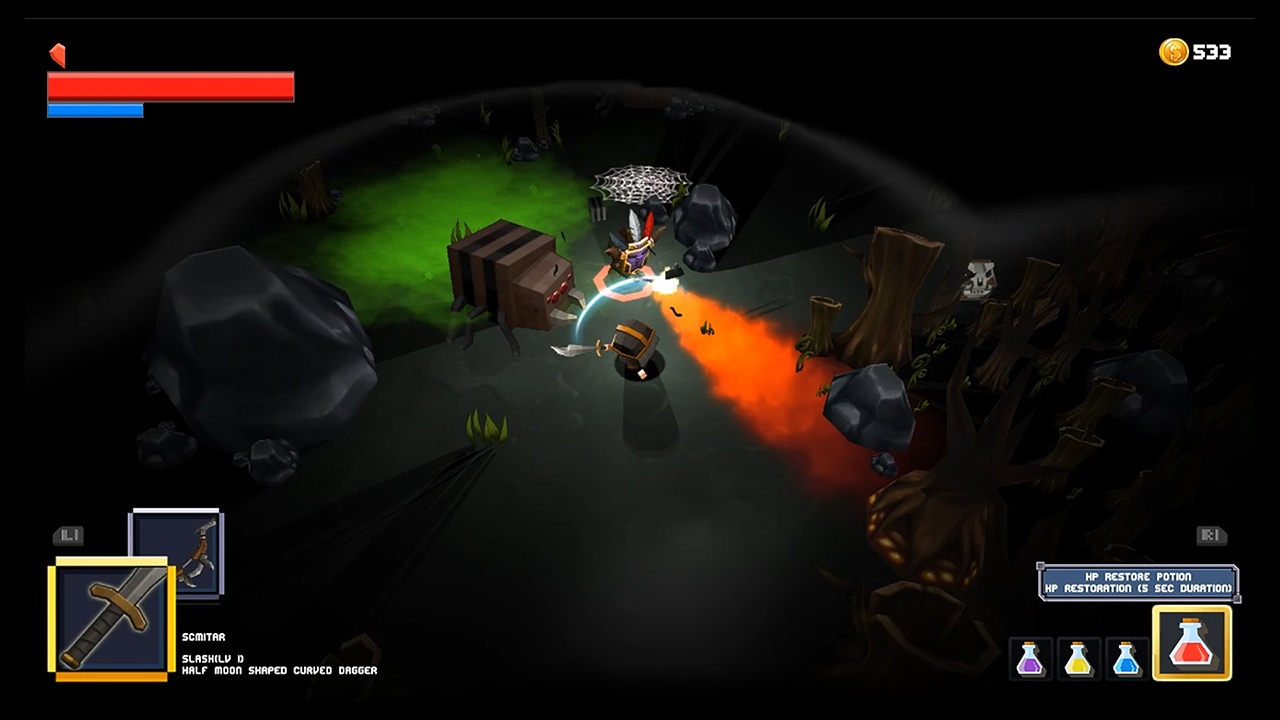 There are plenty of weapons to get to grips with, such as melee weapons like swords & maces, there are also guns and magical staffs that shoot out various explosions. Shields can also be picked up but are not particularly useful. You’ll find the melee weapons are not as good as the guns/staffs, if something is getting close enough to you so you can hit it with a mace, then it’s probably too close to you. The staffs are probably the best weapons as some of them can easily one shot enemies or have a wider range so can hit multiple enemies. There’s a stamina bar that depletes each time you use your weapon, so again having a melee weapon when you run out of stamina is not effective, at least with a far-reaching weapon you can run away and shoot from afar.

Throughout Survive! Mr. Cube’s stages, there are several abilities you can improve, either on the short-term or permanently. Your health bar regenerates but starts off quite low; killing certain larger beasts produce hearts that increase this. There are stamina regen power-ups (not that useful), agility power-ups (help gets you out of sticky situations), strength power-ups (very useful against stronger enemies), health regeneration power-ups which are helpful if you’re being overwhelmed. There are various enemies that come after you, basically if it sees you then it’ll go for you, ranging from little spiders to larger spiders, some enemies have armor whilst others have projectile weapons. After the first couple of times you die you’ll be able to deal with them more effectively.

There are some novel aspects about Survive! Mr. Cube which are quite innovative. Any gold you uncover carries over from one life to the next. When you are resurrected there is a Grim Reaper run shop where this gold can be spent, you can’t choose what you buy however. Usually it results in a health improvement or a better weapon. Within the same scene you can interact with your grave to uncover another power-up. As you progress through Survive! Mr. Cube there are times you will come up against fellow cubes, they can range from being super strong to super weak. If you beat them then you can take their weapon, so that’s another way to improve your arsenal but be careful because some cubes can be very hard to beat. 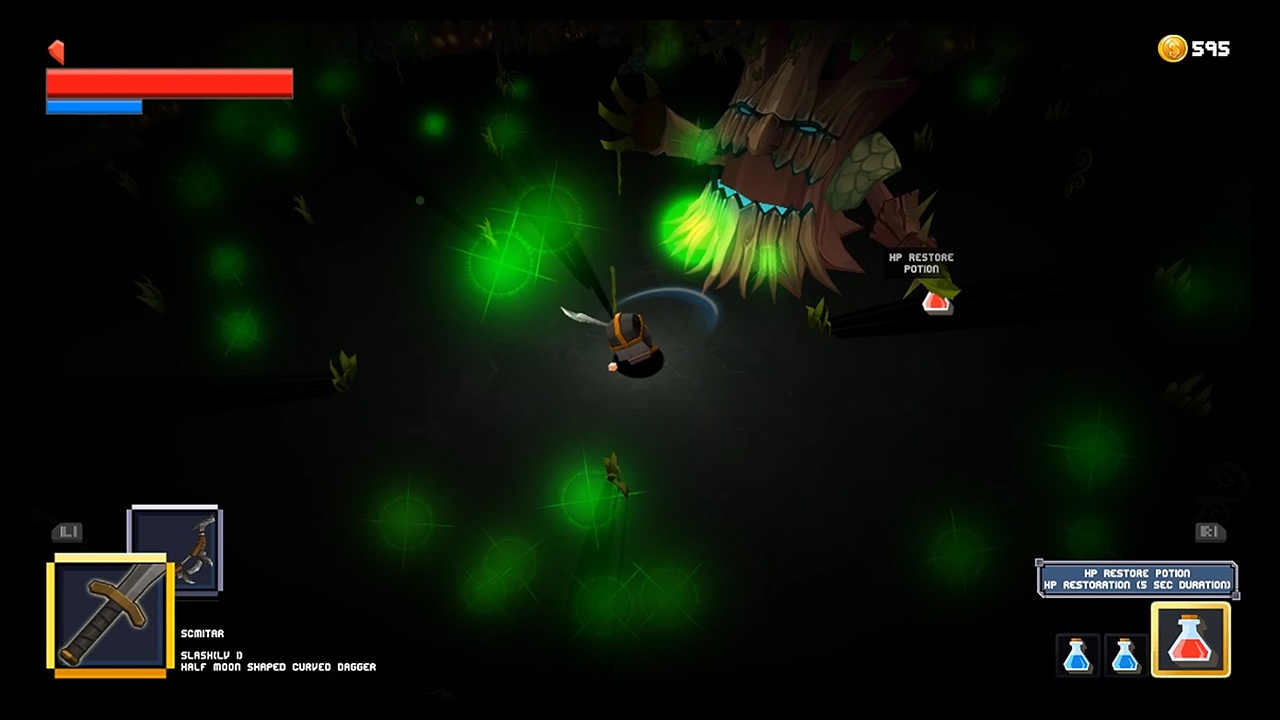 Graphically Survive! Mr. Cube is very simple in a charming way. The enemies are a little on the repetitive side but it’s always fun to see what your cube will be wearing after they are resurrected. The different stages have a very basic feel and look to them where most of it is hidden by fog until you traverse through. After a while the repetitive running and shooting can begin to grate, especially when you become quite powerful as there’s very little variety in the stages; the experience begins to wane as you spend more time with Survive! Mr. Cube.

You’re a cube who has to survive to see his wife again, lets play Survive! Mr Cube…………….