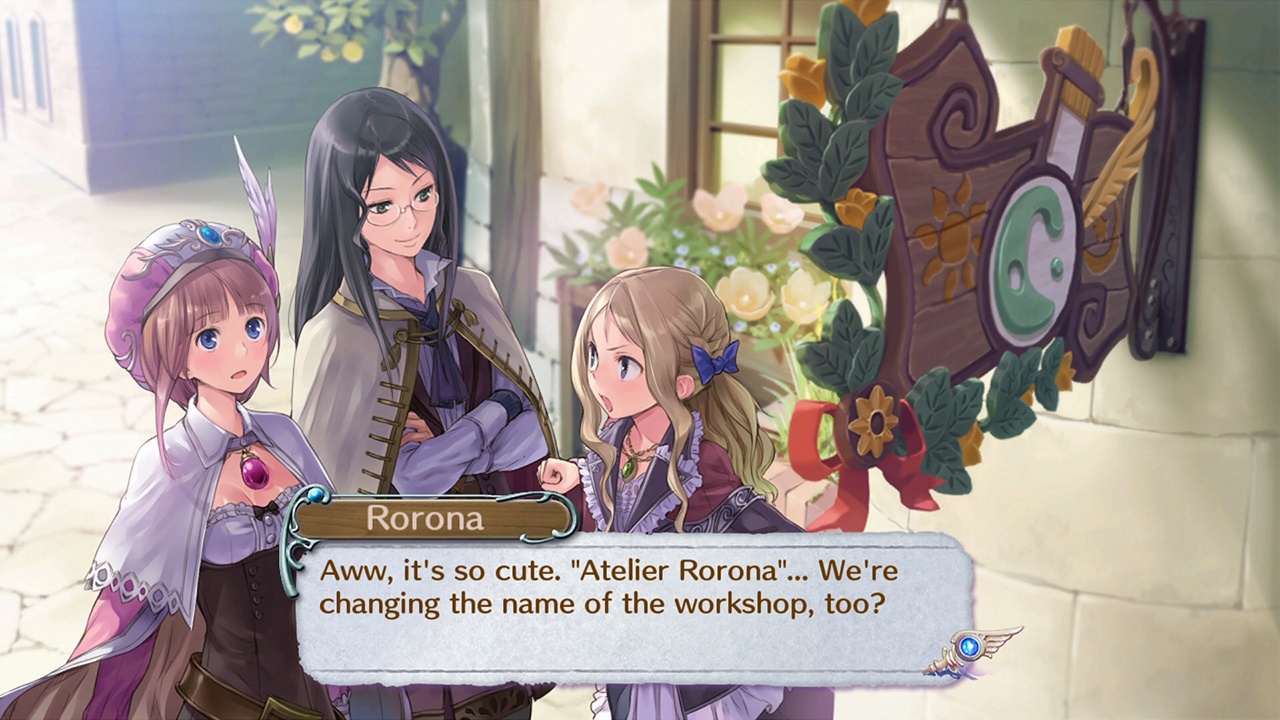 It’s been a hell of a week for the Switch, hasn’t it? Smash has arrived (and I plan to get it, eventually), a ton of fighting games were announced, some crazy potential crossovers and ports are planned, and that’s all somehow overshadowed the release of Katamari Damacy, which hopefully doesn’t go quiet into that good night. But there’s another big thing happening, and that’s the gradual rise and port of all these great titles that were locked out to Nintendo fans in times gone by. There were rumbles that the Switch would become the spiritual successor to the Vita, finally being a vessel to help bring visual novels and obscure JRPGs to fans in the West, and, by God, it looks like that might finally be the case. In no time flat, we’ve gone from not one, not two, but three crazy, adorable, and slightly frustrating titles from Koei Techmo, the new owners of Gust, who famously makes some seriously Japanese games. I hope you’re ready for a ton of information regarding cute girls becoming alchemists, because the Atelier series is hitting the Switch, and we’re starting with the Arland trilogy. Here, we see Atelier Rorona: The Alchemist of Arland in a shiny new DX version.

Rorona is this adorable, impossibly misbegotten child who is part apprentice and part slave for an alchemist, Astrid, who is simultaneously loving and neglectful. The master is given an ultimatum by the kingdom: finish our requests in a limited amount of time or get shut down. Not to be daunted, the master immediately transfers ownership of the alchemy shop to Rorona and makes this all her problem. Rorona then proceeds to flail and head out to master some really unfair conditions, given that she was just kind of a gopher prior to this. Along the way, she’ll learn that her Master and many other people really care about her, that alchemy is in her blood and she’s a natural, and that the king is a bit mean; but only because he wants her to succeed. The whole thing is convoluted and pretty absurd, and I know I’m missing some important details, but there are three games, give me a break.

The game breaks down into three important sections. First, and I argue the most important, is the overworld combat and exploration. Rorona must venture out into different parts of the world in order to find ingredients to make stuff in her giant alchemy cauldron. However, there are monsters out there, and she is definitely a girl who likes to vaguely try to hit things, so she needs to hire help. Some help costs money, and good fighters cost a LOT of money. So you find ingredients to make stuff, and you have to fight monsters that are present out in the area, and that gives you some fairly worthless exp and some cash, which often goes back into materials for keeping you alive and buying armor and weapons. Fact is, none of the important ingredients are in Rorona’s backyard, so you need to trek fairly far in order to get the goods, and time is literally ticking down every day that you’re out in the fields, fighting for your meals. Eventually you’ll get things down and understand the best places to hunt for stuff (hint: it’s almost always where you haven’t been yet) and you learn to harvest both the ingredients you need and the extra stuff that makes what sells well. There are twelve mandatory fetches you must accomplish before the end of the game, but you can take on side quests (and you really should) to get stuff for other people to build up your reputation as a good person, which plays heavily into the second aspect of the game, the alchemy. 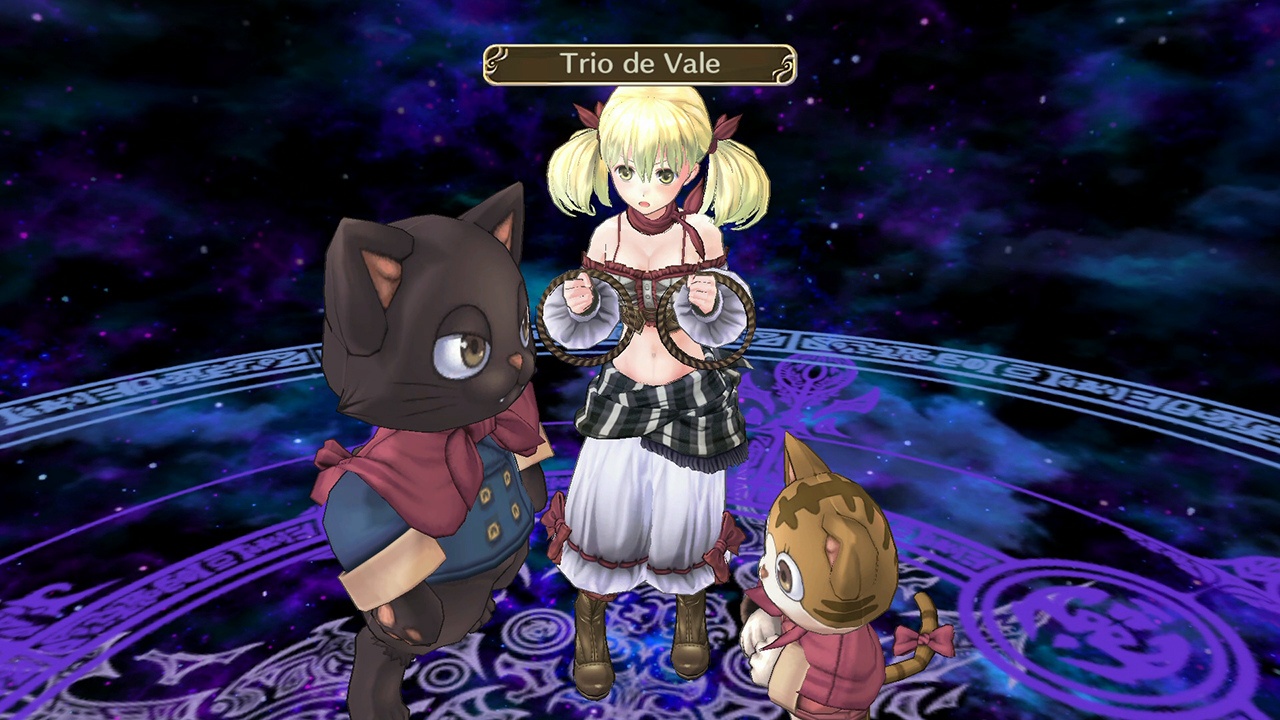 Strictly speaking, Atelier Rorona ~The Alchemist of Arland~ DX has some fairly simple crafting, especially in comparison to even more recent, easy titles like Little Dragon’s Cafe. The biggest thing is finding recipes, which you get from books and other people. The more you make, the better you get at it: everything can be crafted to different levels of quality and result in a better response from the item being used. The right tincture can up your speed, buff your defense, heal your party, and, most importantly, cut down on the number of rest days that might jam up you moving forward with other quests. The crafting is cute enough and well structured though: being able to stack and do a bunch of a single item in a couple of days is helpful, either for over-fulfilling requests of your patrons or simply putting together a ton of stuff before a particularly long expedition. And Rorona is an adorable character with a lot of spunk in trying to get things figured out and making the right components.

With all this cuteness overflowing from the main character, you might not be surprised to find out that Atelier Rorona has a bit of a visual novel component to it, and it’s probably the most important element of the game. Rorona has some great interactions with everyone from her best friend to the local weaponsmith, and it all is fully voiced and plays out in traditional VN presentation. There are moments of dialogue choice that can help shape where the game is going, and there is a certain charm to being able to break down the normal RPG walls and see more of a personality imbued within everyone. Of course, you run into tropes as a result, including the gruff guard with the secret heart of gold, the blundering heroine with a heart of gold and the hard-assed alchemy master with a heart of gold but also she sort of doesn’t care. Truth be told, these dialogue moments and character development were some of the few moments that kept the game going for me. 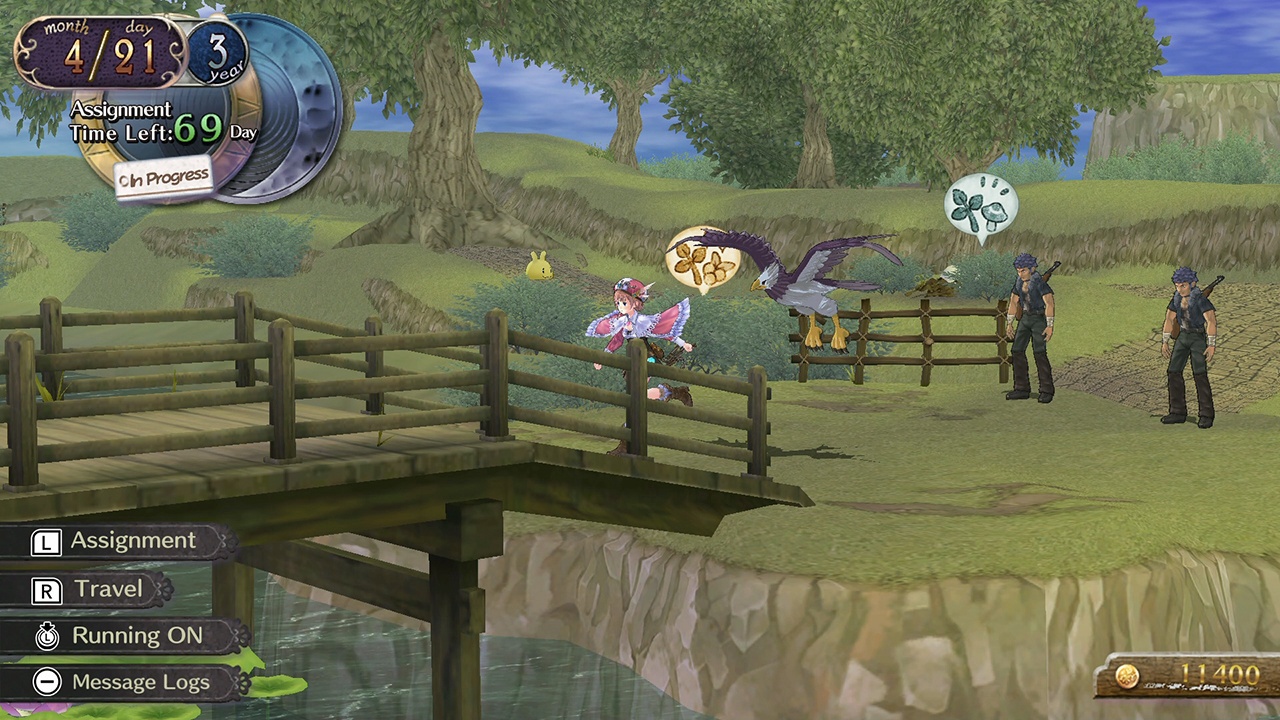 That’s because there’s a odd, unbalanced feel to a lot of the game.  The countdown timer in particular is something that utterly rubbed me the wrong way. With a set amount of days to accomplish each task, there’s actually a bit of pressure in making sure that you have the right components on hand, the correct course plotted out for where and when to get ingredients, if you have the right cash to hire friends to fight with you and, naturally, if you’ve chosen the right assistants. You don’t really have to be under the gun until about the third task, but, right from the beginning, it’s an uncomfortable feeling to constantly know that you have limited time. And, unlike certain other games with this time limit factor, you will literally get a game over if you miss the deadline. You then need to restart from your last save, but that might not be enough: if you’ve been off track enough, this could easily lead to the end of your time in Arland. So that’s an awkward thing to keep in mind.

Additionally, you really need to love the game and the concept in order to make it move forward. I understand that might seem incredibly obvious, but it’s important to note for RPG fans. We’ve seen more of a diverse sort of game approach in the past, especially with expansive, wild RPGs like Xenoblade Chronicles and Ys where there’s more of an open feel to things and choices to make. With Atelier Rorona, you follow a path that’s more narrow and linear, and you need to accept the limitations that come with the game. There are plenty (and I mean plenty) of side missions to do and side conversations to have, but they still feel locked into a single stance moving forward. You get the illusion of choice as you move about to different locations and follow different ideas. In the end, you still need to accept that the combat is decent but a little basic, the crafting takes center stage and really is almost a stressful task, and most everything comes back to the great conversations that happen in between moments. This is also one of the few games where the English dubbing is sometimes superior to the Japanese: Rorona’s voice is dreadful on my ears.

But the visual and aural presentation of the game (musically, not spoken) is still quite good. This may have come from the PS3 era, but the graphics were touched up enough to not look outdated, and all the DLC from the games (read: costumes) are baked in with the DX version and it’s ready to go. The game really is quite cute, and I see more of the same coming down the pipeline with the other two Arland games (which I’ll also be reviewing). If you need some visual novel goodness with a very versatile package, then Atelier Rorona: The Alchemist of Arland DX is not a bad choice. Definitely keep this in mind, as it’s been released at such a busy peak and there’s bound to be someone on your shopping list that’ll snap this up eagerly.