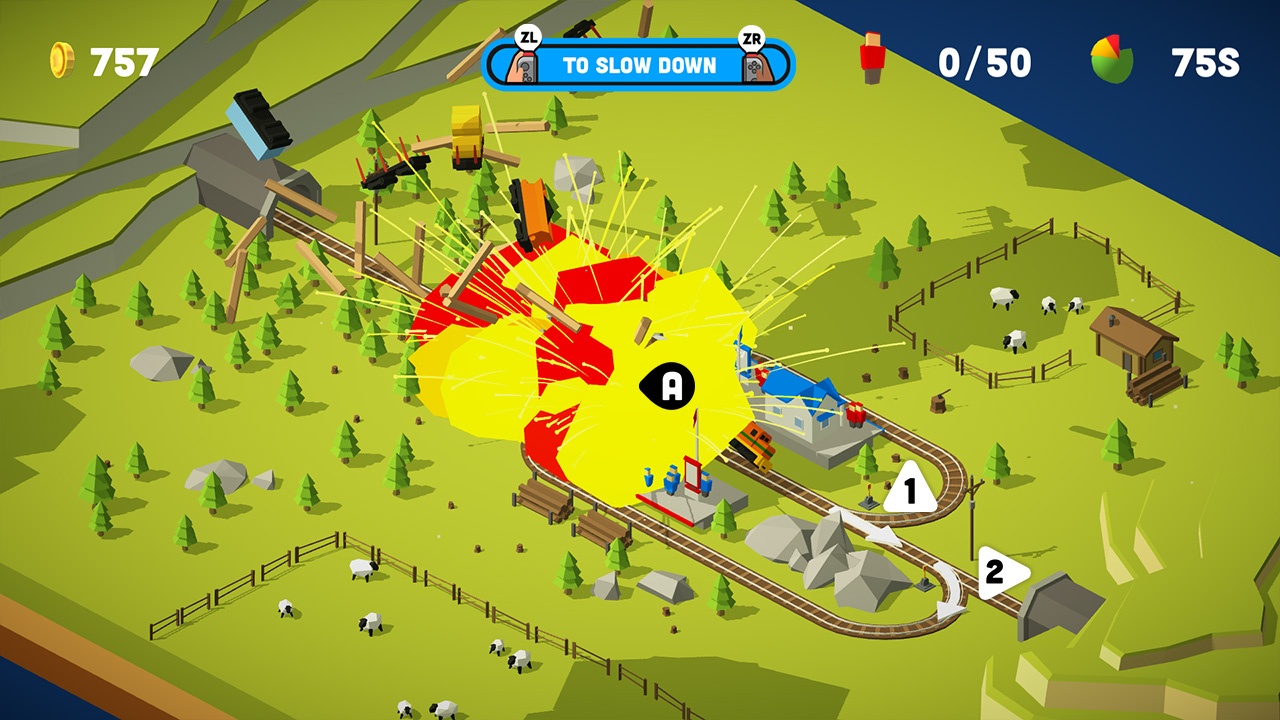 There’s always been a deep-rooted fascination with young boys and trains; although the same can also be said for some girls too and even adults too. This is never more prevalent with the creative elements of building and running your very own train set; whether it be a basic oval track or a more elaborate set-up that is housed within the attic and boasts a series of locomotives, junctions, sceneries and landscapes. Whatever its premise, you can’t deny that there is a definite charm in watching miniature locomotives trundle around the tracks. Despite its charm, or popularity, it’s a concept that has largely been ignored in a video format. Racing cars have been covered with Scalextric and Micro Machines, yet toy trains has largely been a missed opportunity, at least until now, as Conduct TOGETHER! now chugs a release and pulls into the station of the Nintendo Switch.

Developed and produced by Northplay, this is a title that originally started life on mobile platforms and was entitled Conduct This. However, through a series of upgrades and the addition of a multiplayer element, the original title has now evolved into Conduct TOGETHER!, an action-puzzler that involves guiding a series of trains around a variety of tracks, picking up and dropping off passengers, as well as avoiding a myriad of obstacles in order to complete your task in as fast a time as possible. It sounds a simple premise and on paper, or least through the presentation of screenshots, it certainly looks that way with its colourful and inviting aesthetic; but looks can be deceiving and in reality, this is a train ride that’ll soon have you derailed with it fiendishly difficult level designs. However, do not be put off by this, as what we have here is an addictive and very clever little game; one that contains all of the charm of controlling your very own train set. 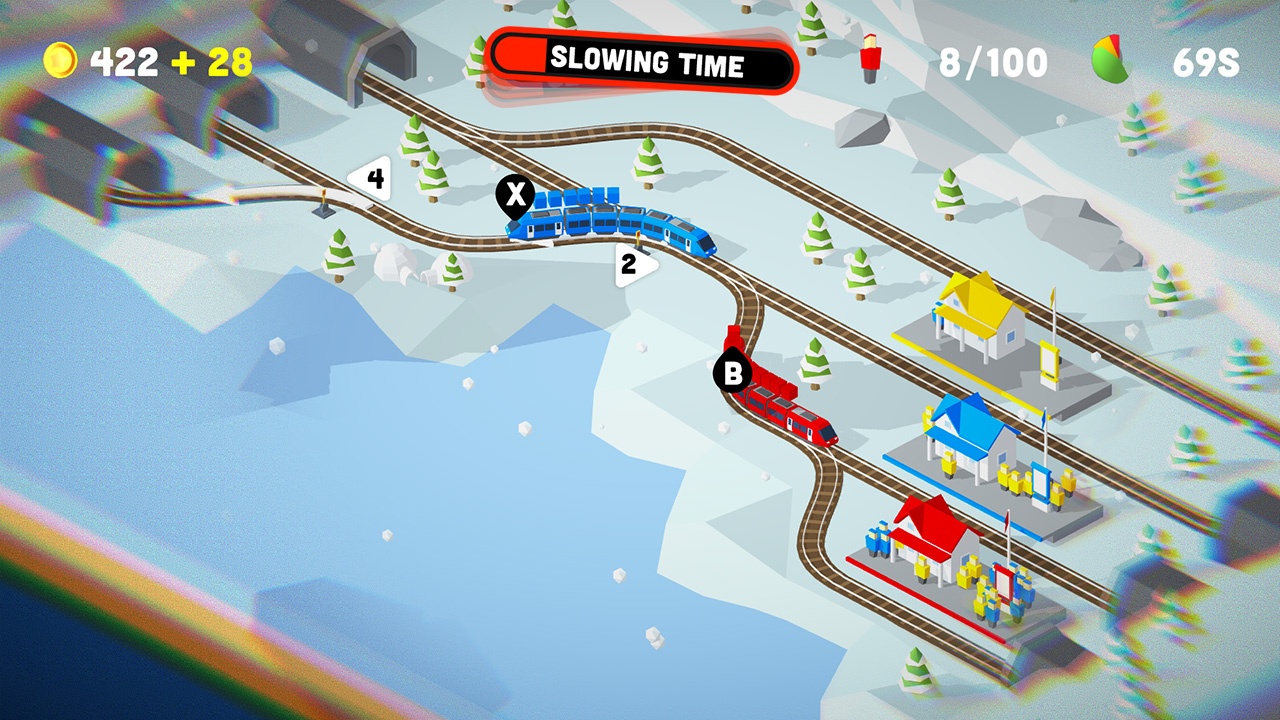 Each of the levels contain a variety of tracks and landscapes. Along these tracks, a number of trains traverse automatically around the terrain. However, you can control the start and stop functions of the trains, as well as operate the junctions that allow each train to switch tracks. It works with a simple style of control-mapping that binds the junctions to the directional pad and the trains to the A, B, X and Y keys. Using these button bindings, you need to guide your trains to the stations, set the tracks so that your trains don’t collide and beware of environmental hazards such as busy traffic on level crossings or in tunnels. Each train, or junction, is labelled with a specific value, such as X. By depressing the corresponding button, you can start and stop the relevant train, or switch the junction. As well as this, the ZL and ZR shoulder buttons can also slow down time to give you some valuable thinking time on how to avoid any future catastrophes.

It’s a simple premise and one that is sublimely easy to control. However, with several trains and junctions, as well as a variety of other hazards, the game presents a very stern challenge; especially as you progress further along the levels. Dexterity and multi-tasking are key here, as you need to keep a keen eye on several elements at the same time, creating a frantic game, yet a rewarding experience at the same time. In order to advance from each the levels, you are required to pick up a set amount of passengers from a station and drop them off at the relevant destination; all within a time limit and surrounded by hazards. By controlling each of the trains and junctions, you guide the trains to the stations and depending on the colour co-ordination of the passengers they pick up, drop them off at the station that matches their colour.

Each successful completion of a stage awards you a series of medals, up to three, depending on your performance, as well as a bunch of coins. Once all the levels have been completed within a certain segment or tile, each one containing different scenarios and landscapes, you can then buy the next tile as long as you have accrued enough money. You also get rewarded with a mystery box, each one containing a new model of train that are based on their real-life counterparts. There’s a lot of variety within this game, from various landscapes, level designs and train models. It all adds to produce quite an addictive little title; one that contains that one-more-go mentality. When you put all its elements together, this is a game that perfectly recreates the feel and fascination of controlling your very own model train set; making it a very playable title. 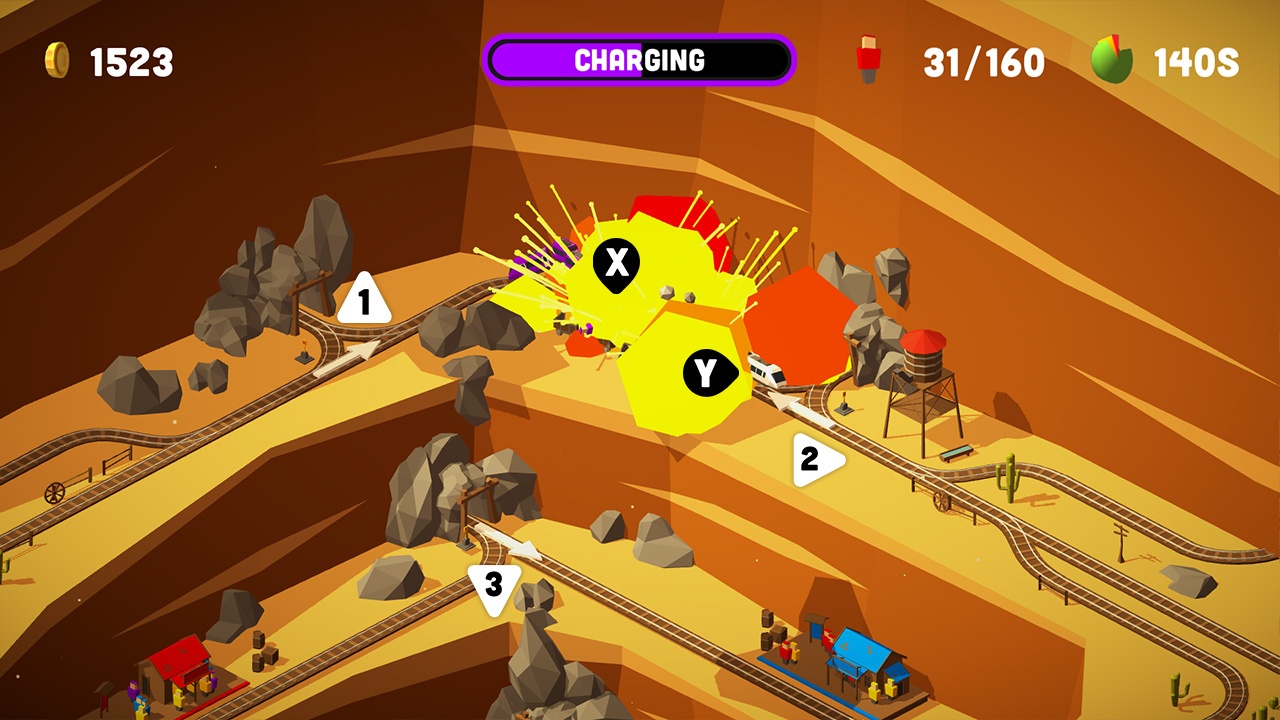 Another nice feature here, is the inclusion of a drop-in/drop-out local multiplayer element. Using a joy-con each, you can partner up with family and friends as each of you take control of either the trains or the junctions that guide them. Communication is key here, as you both work together co-operatively progressing through each of the levels. It can help to make life a bit easier in some instances, as you each focus on your own tasks instead of watching everything that is going on, but saying that, the deeper you progress, the same level of punishment in its difficulty still remains. In some ways, the gruelling challenge can deter some players, especially younger players who may find everything here a bit overwhelming.

Overall though, Conduct TOGETHER! is a fine puzzle and action game. If you love the whole premise of model trains, or even fancy yourself as the overall controller of a rail network, then there is much to love here. However, be warned that this is no easy ride and its challenge can be very difficult at times; although I wouldn’t say that they’re frustrating in their execution. The controls scheme, one that even implements a touch-screen capability, is suitably sublime and very easy to get to grips with. It even contains a certain charm with its graphical presentations, as watching your trains go about their business can be incredible fun with bright, colourful and varied landscapes in which to traverse. The audio qualities though, are adequate, but also quite basic with a horrific coin-counting chime that sounds awful in headphones. Despite this though, this is a fun title, but one that is quite difficult. It’s biggest selling point though, has to be its ability to bring out the child in whoever is playing it and for that experience alone, makes this a highly recommended game.

A game that runs along the right tacks of playability, but a gruelling difficulty level could be off-putting to some.