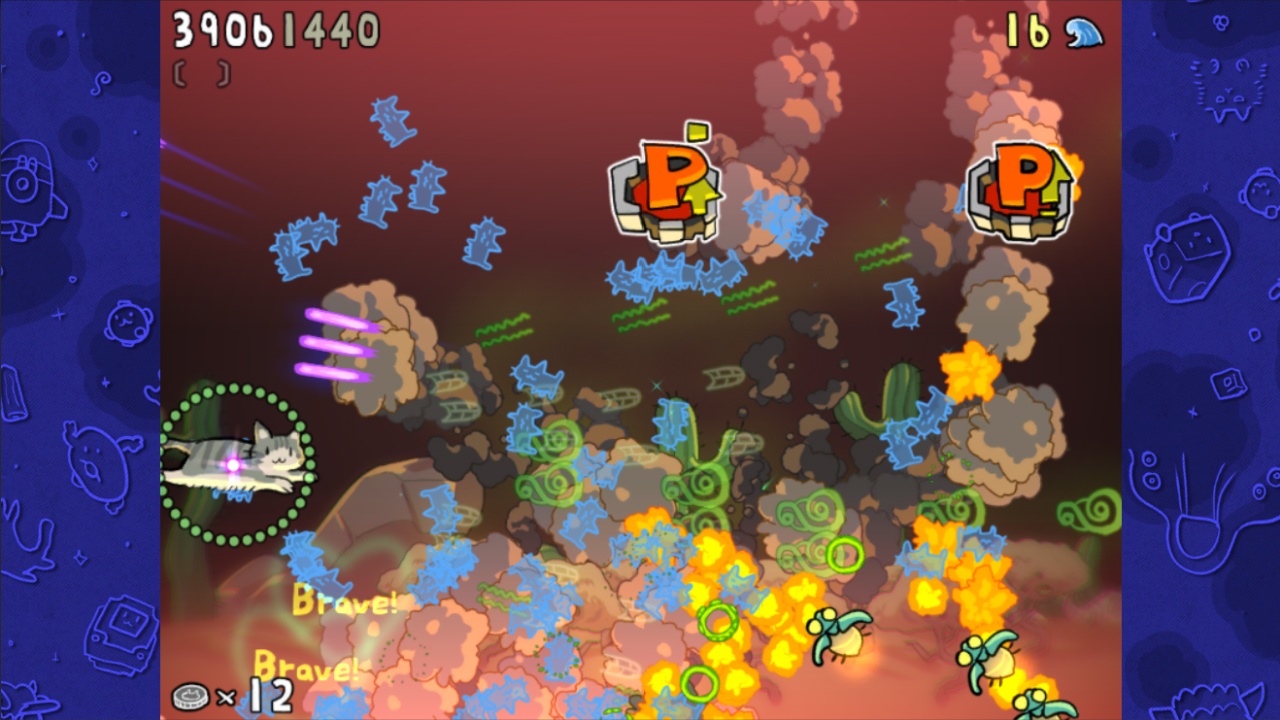 A bit over a year ago, I took a run at a clever little horizontal shooter called Neko Navy. Hailing from the always offbeat and charming Fruitbat Factory, Neko Navy put you in the helm of three cats (with three more to unlock) as they blasted their way through seven days of truly crazy bullet hell goodness, complete with power ups, a surprisingly chill soundtrack, and attacking sausages. At the time, it was great, and I had a blast working through the different stages of boss hood, finding the secrets and, ultimately, putting it up on a solid pedestal. The calendar has turned, and, now, we’re presented with a brand new Nintendo Switch edition of Neko Navy. Dubbed Daydream Edition, there are only a handful of new ideas brought to the table, but they’re good ones.

To quickly rehash some things: each of the cats that you can access has their own unique shooting style, from the concentrated “straight” blast to a wide radius (but weaker) wave style. There’s even a cat who works exclusively with a melee-esque attack, inviting enemies uncomfortably close in order to deal a killing blow. There are three levels of difficulty (easy, hard and DEATH) as you work your way through seven completely different and completely bizarre stages. You start off in the night sky, head into the woods, end up in a medical clinic, then a butcher, followed by a vault or casino of some kind, which gives way to limbo, and finally ends with a rainbow sort of end game. Each stage has a boss (yes, even stage three), and they all require certain levels of expertise and “learn to fail” in order to get where you need to go. Defeating all three forms of the final boss ends the game and unlocks a new character, and also gives you your final score.

The main jewel of Daydream Edition is the Infinite Mode, a new way to play that invites you to see how far you can get with a single life and zero continues. Infinite Mode is a surprisingly excellent addition that’s clearly geared to either entice former Neko Navy players or to reward newcomers who put in the time and effort to enjoy Infinite Mode. I’ve always said there’s some kind of relaxing aesthetic to Neko Navy, especially how the combat and shooting can be relentless but calming, and Infinite Mode really drives that point home. After a very quick power up, you simply just go. The level design is this airy, flowery place while an upbeat J-Pop tune loops in the background. Honestly, if you can survive the very first wave (how I hate those jellyfish), you can easily get to at least wave ten without any serious problems. It should be noted, though, there are no difficulty settings here: if you’ve only been playing on easy, you’re going to have an impossibly bad time starting this one out. 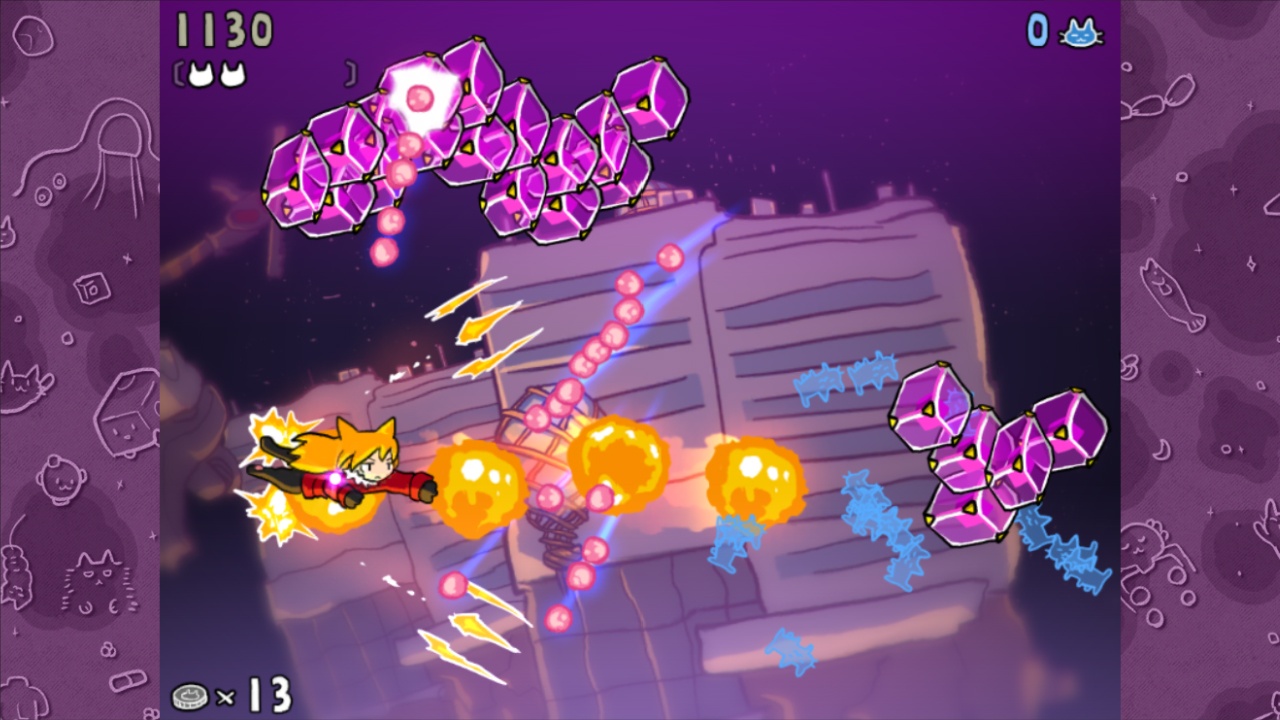 Speaking of difficulty, things have been rebalanced across the board with the difficulty settings, and I think that really needs to be acknowledged and appreciated. As much as I enjoyed my first foray into Neko Navy, there were moments that felt a bit off kilter in terms of how the game rolled out. For example, easy, previously, was something that was very floaty and relaxing right up until about day five, when everything suddenly spiked and I was left quite shocked at the change in tone. Death, in comparison, was crazy hard right from the beginning, but, if you got your sea legs by Day 2, you could pretty much deal with everything else from there until the end. It didn’t quite make sense, but I was more focused on the cute characters and the smooth soundtrack, so I didn’t think much of it. Having played Daydream Edition, I can say that there’s definitely a better understanding of the scalability of the game. The gradient in easy is much lower, never really hitting a bit challenge until the very last day. Hard (which still feels like it should be labeled “normal”) ascends and increases resistance in a more fluid manner, turning the knob up until you’ve got cat soup. And death…wow. Death isn’t holding anything back this time. It feels more like a roller coaster, purposely slamming you around between moments where you can breathe and long seconds where you’re underwater. Death really reminds you to use that bomb as often as you can in order to buy another fraction of thinking time, and you can mercifully use it in good spurts to clear the room. It’s really well done.

As for the core gameplay and ideas, Neko Navy is still just as wonderful as it was for the PC release. You hold down the fire button and never let go, and you understand where your damage spot is on your cat pilot and learn to weave it in and out of danger. The easy mode feels less danmaku and more just shooter, though I have to give props to the game introducing the idea in a calmer atmosphere so that new players might get comfortable with the concept. You can keep the game in the original aspect ratio with borders or stretch it out to fill the Switch’s screen, and I honestly recommend keeping it cropped. The stretch feels like it messes with my perspective, though it looks good (nothing seems oddly stretched). Since I originally played with an XBox controller, the use of JoyCons honestly made for a more successful play overall: the controls were obvious, and moving the pause button to X instead of the plus is a stroke of genius for people fully vested in the shooter: it’s so much easier to roll your thumb up and pause that way instead of trying to fumble for the plus in the middle of a donut-based assault/ My success rate in terms of play was significantly better on the Switch, and that’s not just because I’m a fanboy. Maybe. 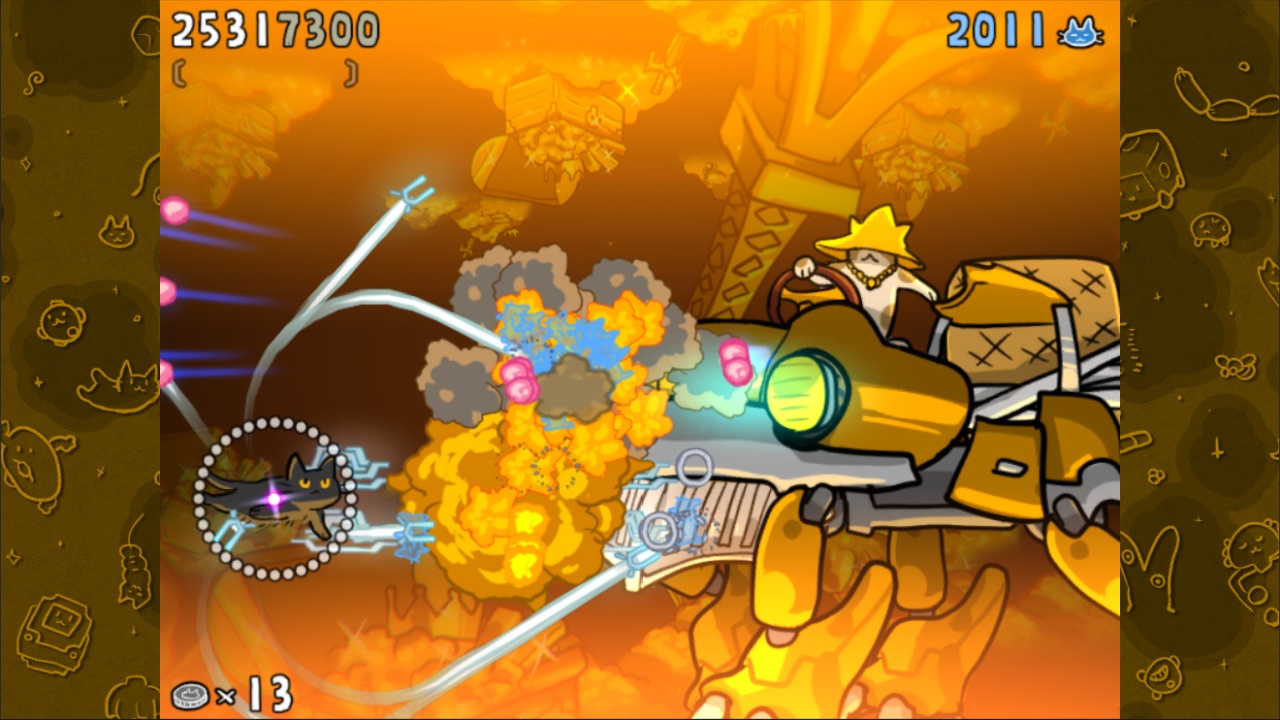 Lastly, thank you, Fruitbat Factory, for keeping the achievements in. I understand that there’s a bit of frustration from the community (still) that Nintendo is resisting a universal achievement system. So all the medals you get for using bombs or fighting secret bosses are locked to only your Switch. But they’re nice to see. They give you something to strive for, because the high score table isn’t online, it’s local only. Not complaining, simply stating where things are (and the online leaderboards for a game like this would be hell to behold). You can use the achievements to learn more about the secrets of the game and to give you direction as to what you should be doing next. This is all while the game itself offers up training to practice particularly awful stages (Day four on death is one of my least favorites) so that you can prepare for a full run. There’s no procedurally generated nonsense here: just waves upon waves of memorization that will be your salvation.

Neko Navy: Daydream Edition is everything great about the PC version with some cleaner difficulty settings and a really enjoyable Infinite Mode. If you like bullet hell game, chill groove soundtracks, cats and exploding medicine capsules, then this game is the best one for you. For all of us, really. Go ahead, pick up a copy when the launch comes. Okay, good luck!

Neko Navy: Daydream Edition is everything great about the PC version with some cleaner difficulty settings and a really enjoyable Infinite Mode.