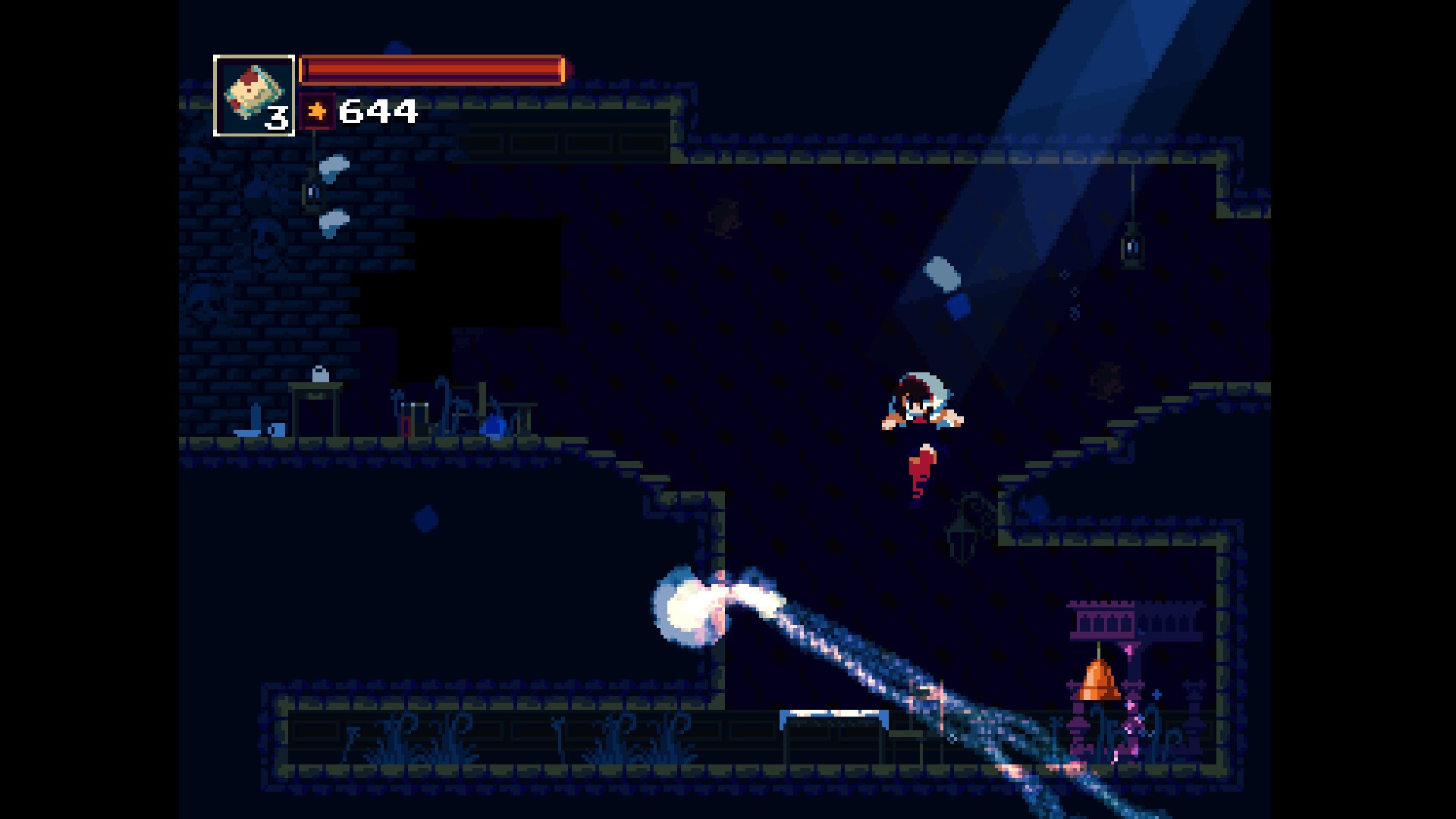 Momodora is such a strange and interesting series to try and follow the lineage of. The first couple of games look deceptively low fidelity, and the first title in the series feels more like if Cave Story and Mega Man had a baby that was all about bucking the enslaved princess trend. The second one started to take steps in the direction that the series would eventually become, but still felt more like Curly leading the charge than any original characters. The third game (and the first that became available for Steam) is right in a sweet spot: it’s still a bit more pixel art heavy, but it really expands a true “metrovania” feel, offering up more progressive gameplay with better styles and systems. Then, Bomb Service (the developers) hit gold with the fourth instalment, which has gotten successfully ported to several systems. Nintendo Fans can breathe easy, knowing that there’s a whole new beast to smash their Switches over. Put down the Sundered and the Hollow Knight, it’s time for Momodora: Reverie Under the Moonlight.

If you’ve never played the original Momodora titles, don’t worry: RutM is a prequel that actually takes place 400 years before the first game. In this instalment, you play Kaho, a priestess who is dealing with a massive, crushing curse plaguing the land and making everything awful. Determined to not be, you know, swallowed in despair and darkness, Kaho sets out to find the source of the evil, and learns that the corruption and decay comes from none other than the Queen herself. Meeting with a unique set of characters along the way, including the fallen heroine, Cath, Kaho must brave countless enemies, truly fearsome bosses, and the darkness itself in order to do her duty and save the land. It’s a dark and tragic tale, but a beautiful one, nonetheless.

Momodora: Reverie Under the Moonlight is set apart from other metrovanias in several special ways. First and foremost, you very rarely “need” to find items in order to progress. There are certain affectations that you can find, including extensions to your health meter, active items that grant limited but important bonuses, and passive items that augment your primary weapons (a bow and a…leaf?). However, in most cases, you can progress to the next area of the game without grabbing most, if any, of these hidden items, though you’re strongly recommended to do so. One of the first that’s dropped by the first boss (if you’re lucky) is a phenomenal little tool that grants poison damage to your arrows. It’s invaluable for a first time playthrough, as patience and dodging help to end boss battles in your favor, if not quickly. There will be some moments where progress will be impossible without the right things in hand, but you’ll be keenly aware of those times. 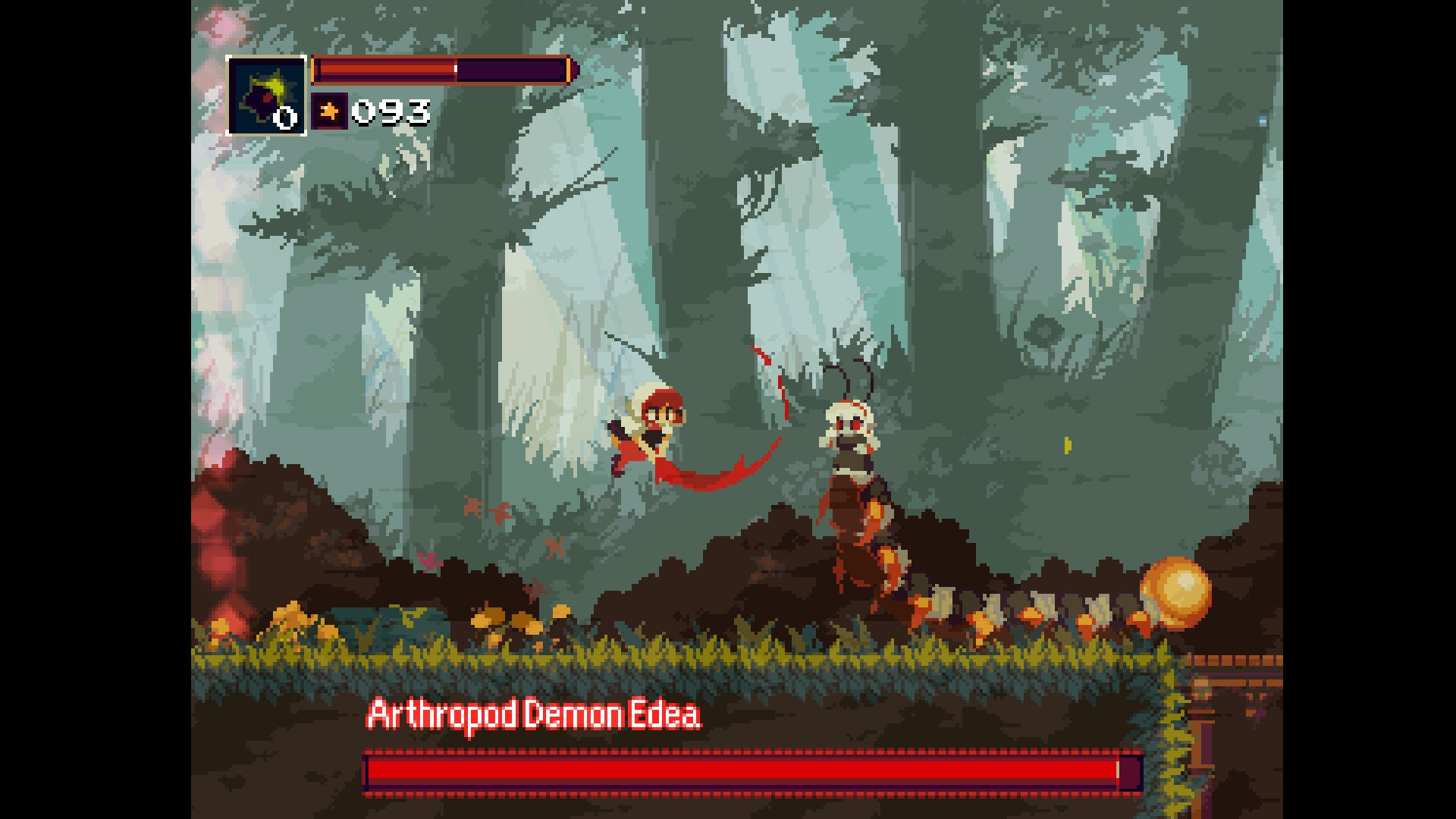 Additionally, Momodora feels more like a directional adventure than a true exploration title, but I’m not holding that against Bombservice. You’re dropped into the game with very little preamble, and you take the first couple of screens to understand your basic buttons, including dodging and double jumping. Dodging becomes your mainstay and your best friend, as you quickly understand that Momodora, to be quite blunt, is not mucking around. The early enemies are cute and simple in their patterns, but they still can knock you flat in a second if you’re not ready. Almost immediately after you finish the brief tutorial, you end up descending a shaft, in which you’re greeted by enemies with ranged weapons, poison weapons, shields and plenty of energy to turn and face you if you roll behind them. The severity of the game takes on a strong edge immediately, and it never relents, getting harder all the time. When you reach the second boss, it becomes crystal clear: learn to dodge roll with apt timing or you’re toast.

What makes this setup great for a game like Momodora is that the player quickly learns the risks and rewards of the game, and adjusts accordingly. For example, there’ll be times when enemies, who float around and rain hell down upon you, can be engaged or ignored. You get more munny stars from making sure to beat the hell out of everyone (and you can use that cash to buy stuff eventually), but you can also use these opportunities to get better at dodging. This is kind of a “replay” point of view, but getting better at dodging means being able to beat bosses without taking a hit, and not taking a hit from bosses means a better chance for an item to drop, which means not needing to buy it later in the game. Momodora allows players to decide how to best approach the game. They can be more combative and basically sing for their supper, making sure to destroy everything to keep their coffers full, or they can be selective and precise, like a murder surgeon, and get their rewards from dead bosses and quicker reflexes. 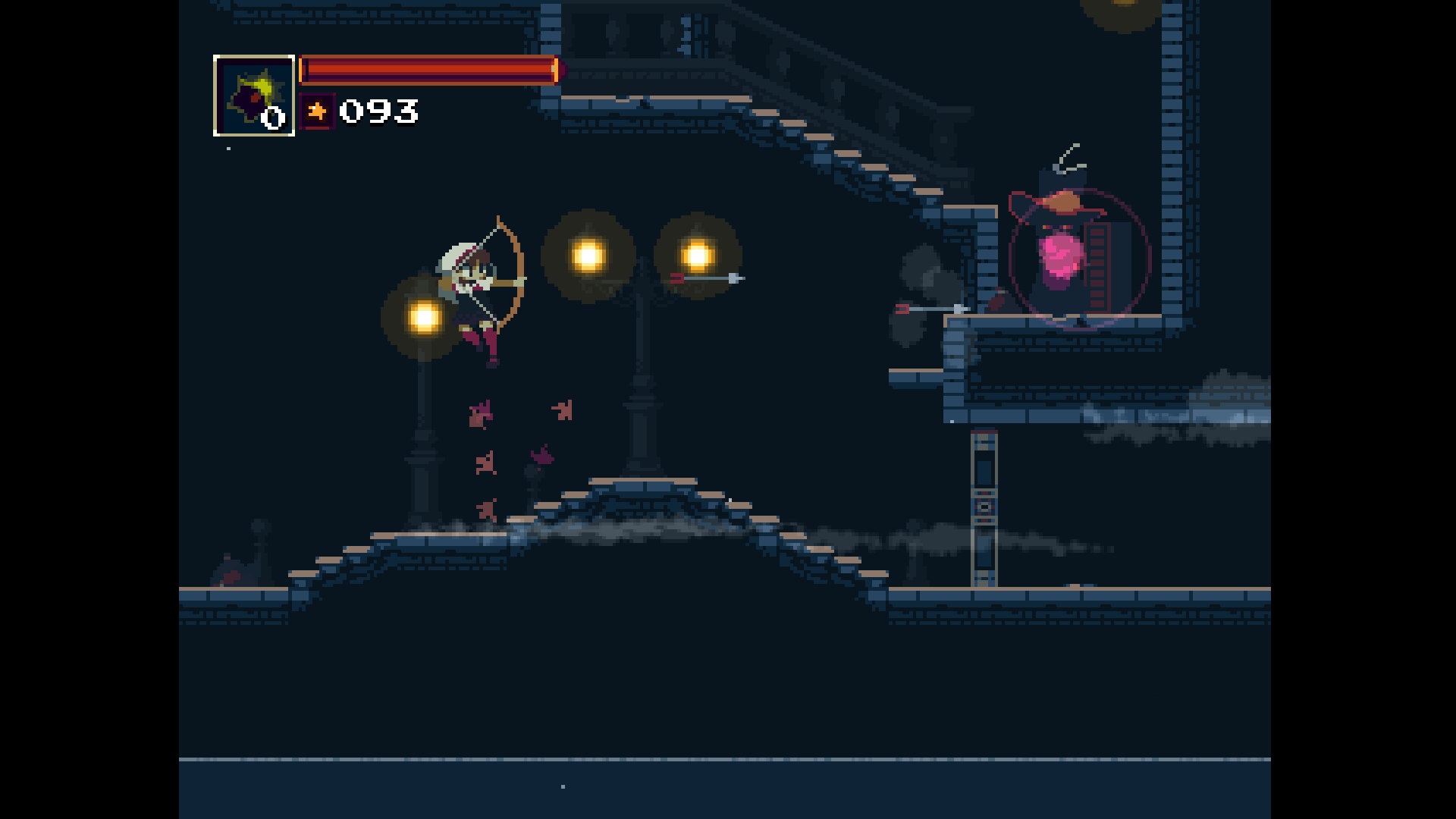 Visually, I love the style of Reverie Under the Moonlight. It’s got this beautiful balance of rough pixel moments and heavy saturation to remind you there’s a gorgeous backdrop to this awful story. The time you spend inside is long and depressing, but that almost makes it more worthwhile when you get outside, breathe the fresh air and see the blood red moon that reminds you “Oh yea, there’s a terrible curse at work.” The mobs and the items all have their own style to them, and the animation translates really well into the action of it all, from the recoil enemies show when they get struck to the flicker of confidence when they land a blow on you. Naturally, it all culminates into the giant boss designs, with the centerpiece being Lubella, who I believe is the whole reason that PEGI gave this game a warning about sexual nature. Seriously, I get that she has big breasts, but they’re not a part of the story or anything, why the hell are we trying to caution people away from cleavage? You’re weird, video game industry rating system.

Momodora: Reverie Under the Moonlight’s Switch port has been handled by Dangen Entertainment, and it seems like a good and solid port. The transition to the Switch feels like an important and natural move for the game, as this is the sort of indie that’s getting a ton of attention and is already reaching new and important players on Nintendo’s own front. With multiple save slots, optional screen shaking and adjustable difficulty, having a pick up and play title where you can also easily put it down after being murdered by disappearing angel creatures is paramount in preserving sanity. The install size is very comparable to the PC, and there are zero issues with input delay, playback or scaling on the big screen versus the small. The only thing that struck me as weird is that there’s still an option to toggle the graphics, allowing low, medium and high preferences. That’s…is that really a thing for consoles? I mean, I guess if you had a PS4PRO or something, maybe, I’m not sure, but there’s only one flavor of Switch, and it would be truly bizarre if you had to adjust the graphics setting for better playback on certain Switches. Maybe it’s just a holdover from a PC version that was too difficult to remove? In any case, it doesn’t appear to do anything, so I just left it alone after fiddling a bit.

Everything about Momodora: Reverie Under the Moonlight stands out in a positive form. From great graphics to a beautiful yet forgettable soundtrack, the atmosphere of Kaho’s quest and the darkness before her is framed perfectly. The game rewards risk takers and explorers, but doesn’t punish those who keep to the main story paths. The easy difficulty makes the going better, but it never gets so simple that you can relax: there is danger and peril with every new screen. If you’re at all intrigued by strong combat with a great storyline and some good item customization, then it might be time to finally see what happens when the moon waxes red.

Momodora: Reverie Under the Moonlight Review

Momodora makes a dark, triumphant premiere on the Nintendo Switch, introducing a whole new set of players to the frustration of murdering a witch with a leaf.