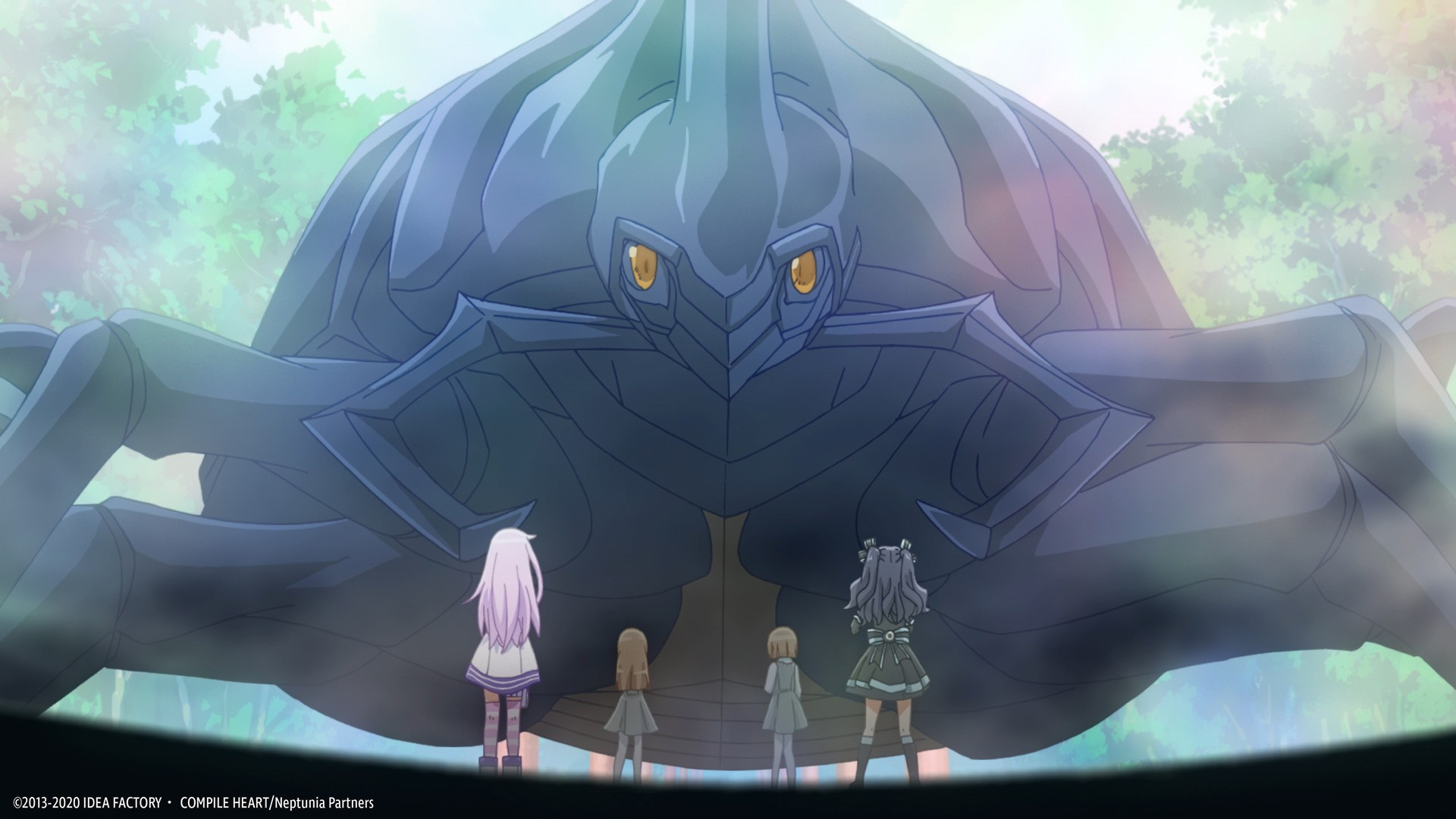 This is probably one of the more unusual reviews that I’ve given, and not because I dislike the subject matter. Far from it: I’ve had a blast with Hyperdimension Neptunia: The Animation. I think it’s weird because of the how and the why that things are happening. See, Neptunia had an animation years ago: like, in 2013. It was one of those short series, spanning just twelve episodes and effectively carrying two full story arcs. It was fun, it had the original voices from the games for all the characters, and it was a little fan servicey without being too over the top. Then, last year, the powers that be created an OVA (which is like an off season, no rules type of anime episode) of Neptunia, which had the original director but used a totally different animation house, and it was…it was okay. It was cute, we’ll get more into that. Now, for some reason, Idea Factory is celebrating ten years of Neptunia by releasing the anime…on Steam? Yeah, Steam video is still a thing. I thought we cancelled it? Anyway, now you can get all of Neptunia’s animation on Steam, and it is a wild trip to go through.

First and foremost, we gotta take a look at the approach. You’re watching anime through Steam, a not totally unreasonable idea, but certainly one that’s a tad limiting. The biggest advantage here is that the price is universal and, as a result, quite a bit cheaper in some countries than others to get this very limited series that, as far as I know, isn’t available in a lot of places (legally). You need to launch the video through the Steam client which then opens your default browser window in order to play it. No matter what I’ve done, I’m totally unable to circumvent the requirements and get the video to load on mobile, which is fine because I can’t offline the video in any way possible. Still, this is something people need to keep in mind: PC is the name of the game, which makes sense because, well, Steam. That means you must be restricted to your monitor or television, so keep that in mind before dropping on this anime.

Hyperdimension Neptunia: The Animation is broken down into three pieces, each of which has its own deal. The first is the initial arc of the series, entitled Crystal of Light, follows one that feels pretty typical for fans of the game series. This is the story arc where we introduce and explain the relationships of the character of Gameindustri, as well as showing some of the discord and debate over the positions of Goddesses throughout their respective realms. People and their faults are explored, most minor characters are introduced and given agency, and we have a general evil undercurrent that preys on insecurities and weaknesses in order to exploit the populous and try to take over the world. This arc is interesting because it’s one that most closely resembles the beats of a traditional game, while also having plenty of anime tropes and off beat moments (including a monster that loves little girls but won’t go near Vert because she’s “too old”). 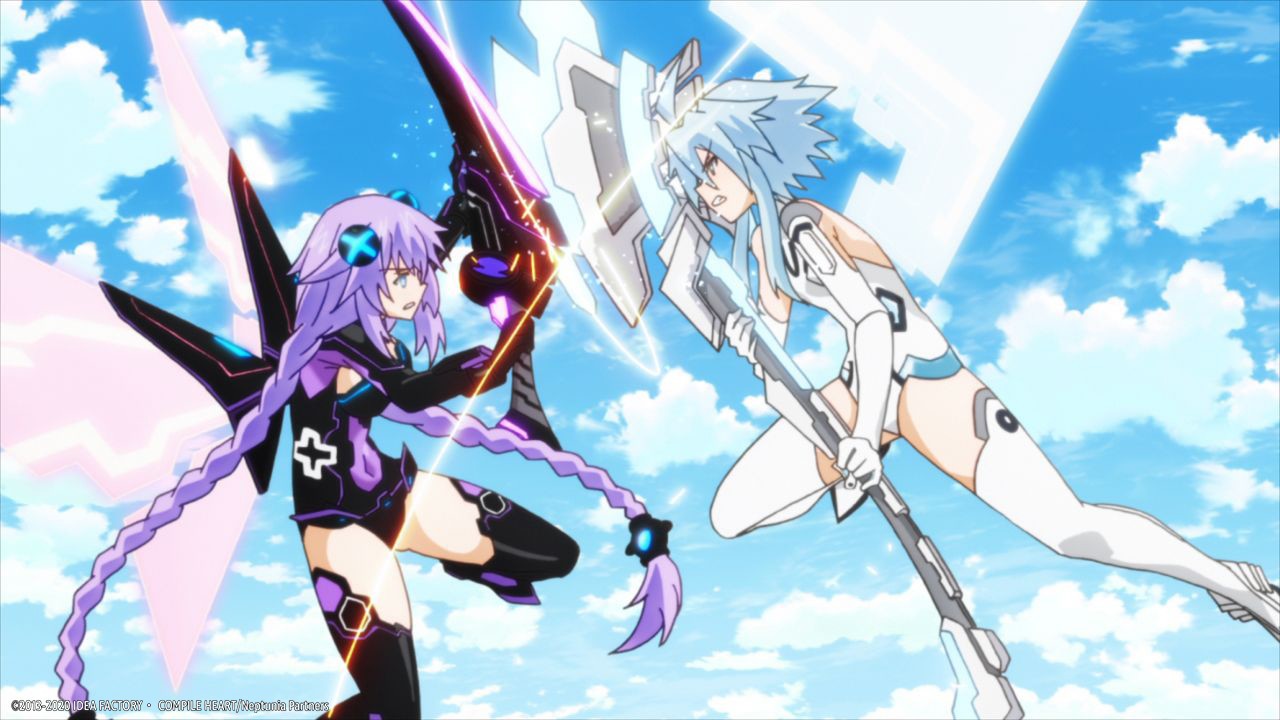 The secondary arc, called the Blazing Bifrost, is more interesting (in my opinion) because it feels like the creators go a bit more “all in” on the anime. While the story arc also feels a bit familiar (the multidimensional thing was explored in Megadimension Neptunia VII), the story takes bigger risks and leaps, adding in additional characters that we don’t see elsewhere (including the humanoid version of PC gaming, which is a big focal point of the arc’s beginning), as well as even more obvious homages and fourth wall breaking (a bandicoot mascot named Crashy, for example). This is also the most fan-servicey of the arcs, having a nude beach segment where a majority of the characters get into it with little to no preamble, so just be aware of that if you’re here for the plot and the weird, perverted Evangelion character who seems to be pivotal as well. Let’s be honest, the whole existence of this franchise is a fan service, so I doubt anyone watching will suddenly clutch their pearls at this revelation.

There’s also the addition of the Neptune’s Summer Vacation OVA, which is cute but, like so many OVAs, a standalone. It’s an inconsequential segment that averages the same length as a usual TV episode and carries as much weight. We get to see a majority of the characters enjoy a summer at a cabin, playing around in the woods and doing some general activities while also eventually having some combat, realizing the importance of the Candidates regarding the Goddesses themselves, and generally leaving fans…I don’t know, satisfied? For me, personally, the timeline of it all is strange. If this OVA had just come out and now we were doing the Steam release, I’d be excited at the possibility of more in the future. Given that the OVA is a couple years old, though, and the anime is even older, it just feels like an inconsequential sequel moment that is coupled with some good but clearly not the same animation as the main arcs.

The compilation of the anime into these two arcs makes for clean and easy watching for Hyperdimension Neptunia fans, but it comes at a cost. For example, while a lot of the arc takes place in chronological order, there was a bit of jumping around in order to make it a complete arc, and it could catch fans of the show on the air off guard. Additionally, the arcs are occasionally broken up with the opening and closing songs, though some songs come from the games as well as the anime. I didn’t mind it, but I wish that they had the songs just in separate file settings in order to enjoy them: having to load up one of the two arcs and then jumping around to find the music I liked wasn’t pleasant. Still, I appreciated that Steam remembered where I was in the stream from the last time I loaded it, so it was easy enough to scrub back if I only watched a song or two last time. 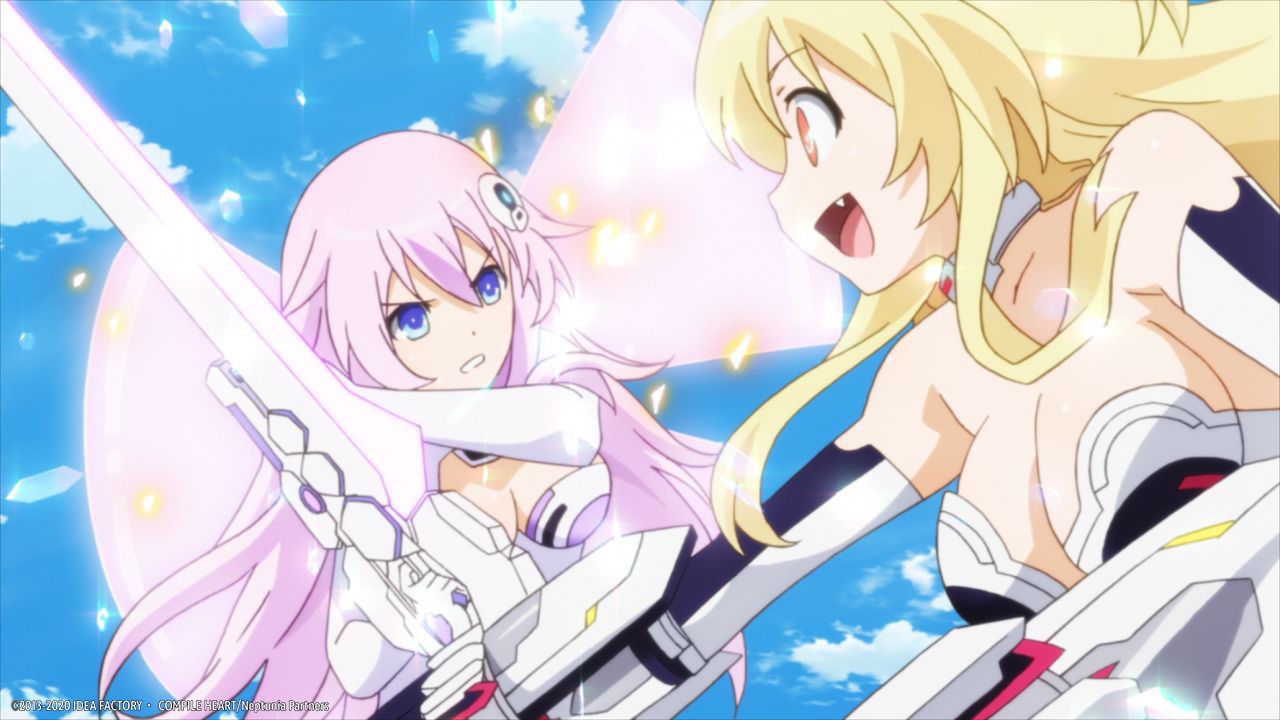 This brings us to the package all together. In theory, it’s a decent setup, all things about the streaming aside. It can be difficult for some people to enjoy, though. One, the audio is only in Japanese, with subtitles available in English, Chinese, and that’s really it. Two, I can’t believe the music isn’t available as just music. Sure, the video to accompany the songs is great, but I was really hoping we’d be able to add a few DRM-free music tracks to the old Steam library to drop onto my playlist for another time. This lack of awareness brings us to the biggest question of them all: should you be watching anime through Steam? I get it, we want to have everything on a singular platform, but this is the first time I’ve used Steam to stream anything since I bought Postal the movie several moons ago (no regrets there, excellent purchase). It makes sense because this is theoretically where all your other Neptunia stuff lives, but I also wonder if having it stream elsewhere could have afforded more flexibility, like different languages or better segmenting. Also, for people not used to buying anime, this could be a big ask: people are often shocked the first time they see the price tag on Japanese cartoons, so only more dedicated NepNep fans will invest.

As I type that sentence, though, I look and realize that most of the great fans of the series ARE that type of fan. I’ve played so many of these games, and it’s brought absolute joy to my library. The anime is genuinely funny and full of both exciting and sweet moments, and including the same voice actresses proves there was thought and dedication put into the construction of this project. While it won’t become a mainstay in the halls of anime history, it puts a smile on my face, which is more than I can say for other game tie-in animes. Hyperdimension Neptunia: The Animation is rock solid fun, and I would recommend picking it up with the 4 Goddesses Online bundle for maximum efficiency and use of your time. Come enjoy some Neptune anime goodness.

Not a game but a complete anime series, Neptune’s animation on Steam is an interesting platform for a fun but inconsequential anime series.