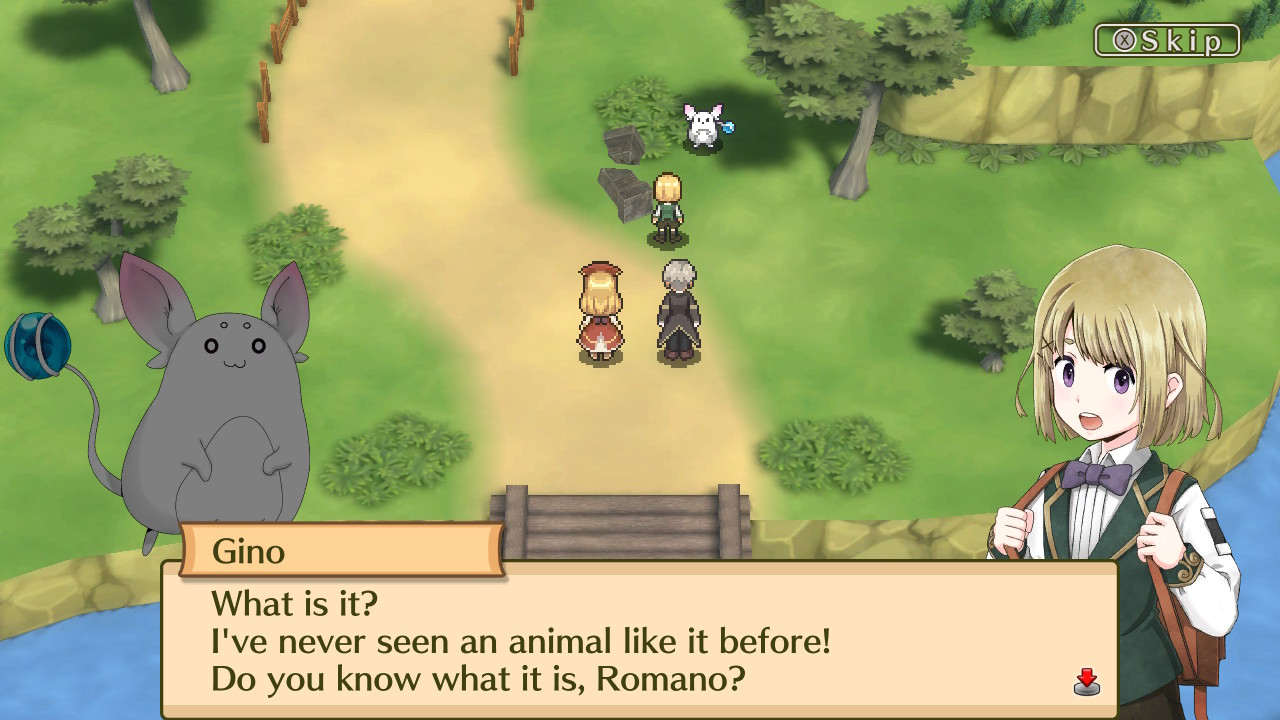 Marenian Tavern Story: Patty and the Hungry God is not only a mouthful (no pun intended) but a shopkeeping sim where you must restore glory to an old, rundown tavern. It’s a simplistic take on turn-based RPG, mixed with a dash of basic crafting and a pinch of a typical JRPG plot. This may sound like a recipe for success, but unfortunately some fundamental flaws prevent the game from being fun for any extended period of time.

They say not to judge a book by its cover. At first glance, the game looks like something akin to Adventure Bar Story for mobile devices–which, by the way, is free to play if you’re willing to put up with advertising–and you’d be correct in that assumption. In fact, MTS itself is available on your phone at a much more modest price tag of $7. It looks, handles, and performs about the same–the only advantage of owning it on console is the fact that you don’t have to use the sometimes cluttered on-screen controls associated with phone games.

When you first start the game, you’re introduced immediately to Patty’s predicament. Patty comes from a wealthy family, though with the disappearance of her father, she and her little brother, Gino, find themselves in a spot of trouble. Not only does the bank seize their home, but Gino quite literally stumbles into the God of Poverty who makes their mission to return the family business to its former glory that much harder. The story is told via character dialogue and could really use some livening up as the wall of text isn’t the most interesting to read sans any sort of voice acting or animation. Characters are static, changing expression per dialogue box rather than reactively, in the moment, and there are some grammatical errors. The game has some fairly annoying stuttering when interacting with objects where your input isn’t registered for a full three seconds–a small eternity when you just want to get on with things. I’m not sure if this is a result of poor optimisation for the Switch console, but it’s definitely noticeable. 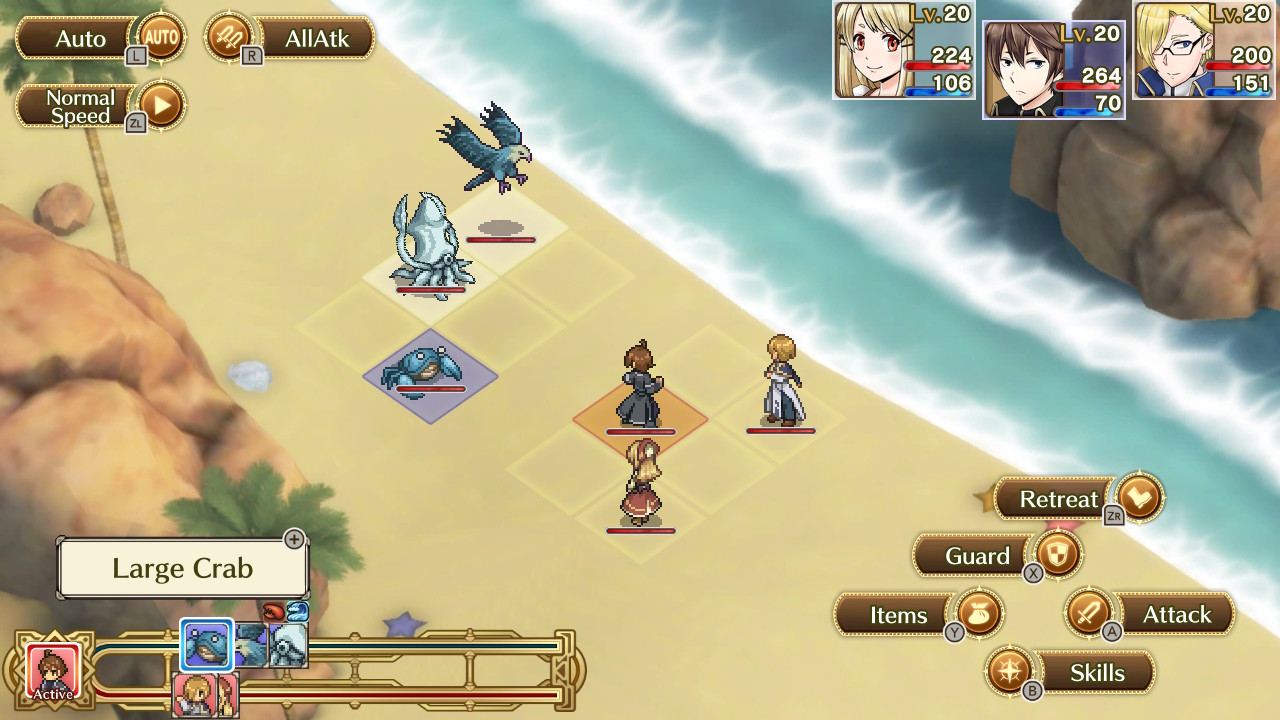 Then comes a secondary text dump: the tutorial.  As first impressions are important, I found this lukewarm introduction to be disappointing, but I forged on with the hope that MTS was more than what meets the eye.

Your daily routine at the Silver Spoon Tavern is as follows:

Gather/purchase ingredients. You can buy ingredients in town, but the majority of your shopping list will be checked off by exploring the surrounding locations. You can only visit one location per day, be it a town or a place out in the field, which significantly increases the need to grind to make the most of a visit. In each area there are a few nodes where you can gather. Enemies drop ingredients as well, so beating them up becomes crucial to stockpiling. You don’t gain level experience from combat, but you do gain skill experience and characters will learn new skills based on combinations of elemental experience gained.

You also unlock a farm at some point, but this has a very slow rate of return and should be considered supplemental.

Cook. Ingredients are used to make food dishes, which can either be sold to make a profit or consumed by your party members to gain experience. I liked this aspect as it took some of the focus off of combat. Cooking is a matter of selecting a recipe (or starting from scratch if you think you’ve got a great idea) that consists of ingredients and a tool. If you have all of the necessary components, you’ll be able to make the dish. That’s it. It would have been nice to have something, like in the Atelier games, where the quality of your ingredients changes up the end result or where you can substitute ingredients for others of the same category, but alas. You can buy and find recipes in the world by rooting through people’s houses or talking to pedestrians on the street. The more engaging aspect of cooking is “hint” recipes where you know most of the components, but then must ascertain what the missing one(s) might be. Usually, this is easily done by comparing it to other similar recipes, but at least they take more thought then scrolling through a list and seeing what isn’t greyed out.

Food is the only thing you can create. It seems like a lost opportunity not to be able to craft gear for your party, though considering the method of gathering materials, I’m glad the developers didn’t add more time to my grind.

Feed the God of Poverty. Coco actually prefers consuming food over your financial success, so feeding him is key to ranking up. Keeping him content nets you item and ingredient rewards. 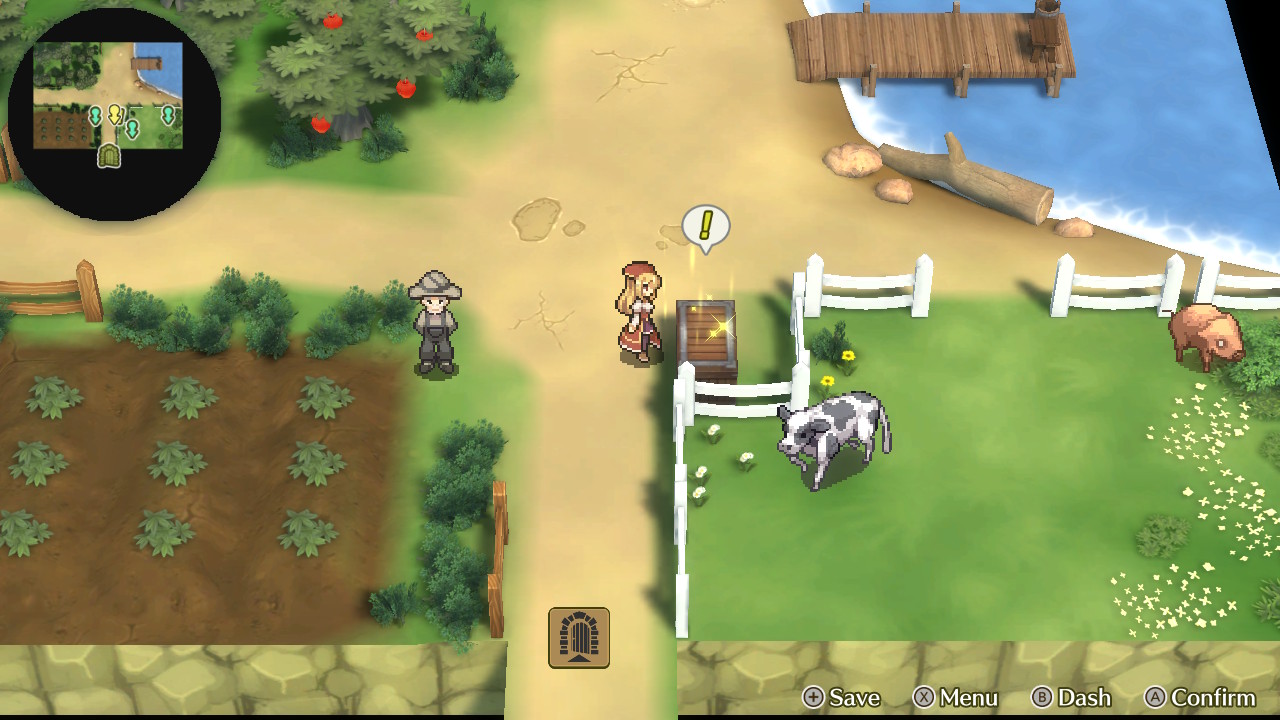 Open the tavern. In other shopkeeping sims, opening your business means interacting with customers and selling your wares. Unfortunately, in MTS it just means waiting a short period of time, during which the tavern will be shown with patrons inside, and then being presented with an itemized list of what you sold during business hours. This was yet another missed opportunity to make the game more engaging.

Repeat. On occasion, you’ll see a dialogue exchange between characters meant to serve as comic relief or learn a new recipe, but for the most part you’ll be grinding to reach the next rank. As you progress, you open up new areas where you can find new ingredients, but that novelty wears off fairly quickly.

MTS offers in-game achievements for tasks such as defeating scores of enemies or advancing your tavern rank. For those driven by achieving milestones, this may be enough to keep wading through the daily grind. For others, crafting every recipe might be enough of a draw. I can’t comment on the longevity or replayability otherwise because of how repetitive core gameplay is–it will vary widely depending on individual.

Don’t get me wrong: I enjoy MTS in short bursts, but the asking price is way too high considering the game’s limited appeal. It doesn’t have much to offer beyond a small, linear world to explore and crafting that has been shaved down to a grindy combo of fetching items and wading through menus. If you have an above-average tolerance for repetitive tasks, this game may be worth checking out on sale. Otherwise, you’re probably better off grabbing the Lite version on mobile and playing that until you (quickly) tire of it.

Can you help Patty quell the God of Poverty before you succumb to tedium?