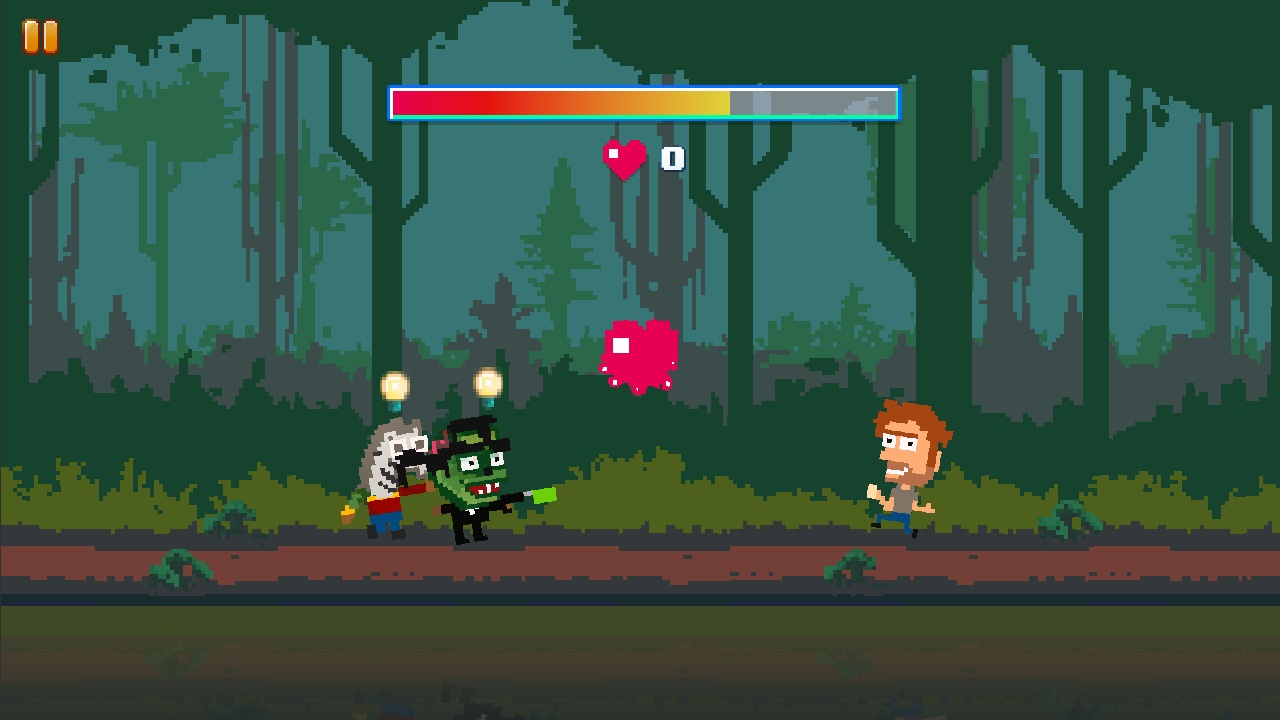 IHUGU is a game about hugging. It’s seriously and honestly that simple. You have exactly two buttons to worry about, and only one of those is used on occasion. You have several “days” worth of levels in which you traverse the globe, giving hugs to those who want them. Of course, you want to make sure you only hug someone once: you may have a limited number of hugs under your belt, and you gotta spread the love around. I think.

To be honest, I picked up IHUGU because the game seemed cute. The graphics are a chunky pixel style with plenty of detail, and the icon of the game, which I rarely mention nowadays, was inherently funny, showing someone trying to hug a visibly reluctant alpaca. I think I’ve downloaded MP3s that have a larger footprint and longer install time than IHUGU, and the developer, Kool2Play, has brought this title across several platforms already. Oh, Kool2Play also has a very long, but very good looking developer logo, so there’s something to be considered there. Additionally, there was a promise of competitive play, which I was curious to see how it was handled. 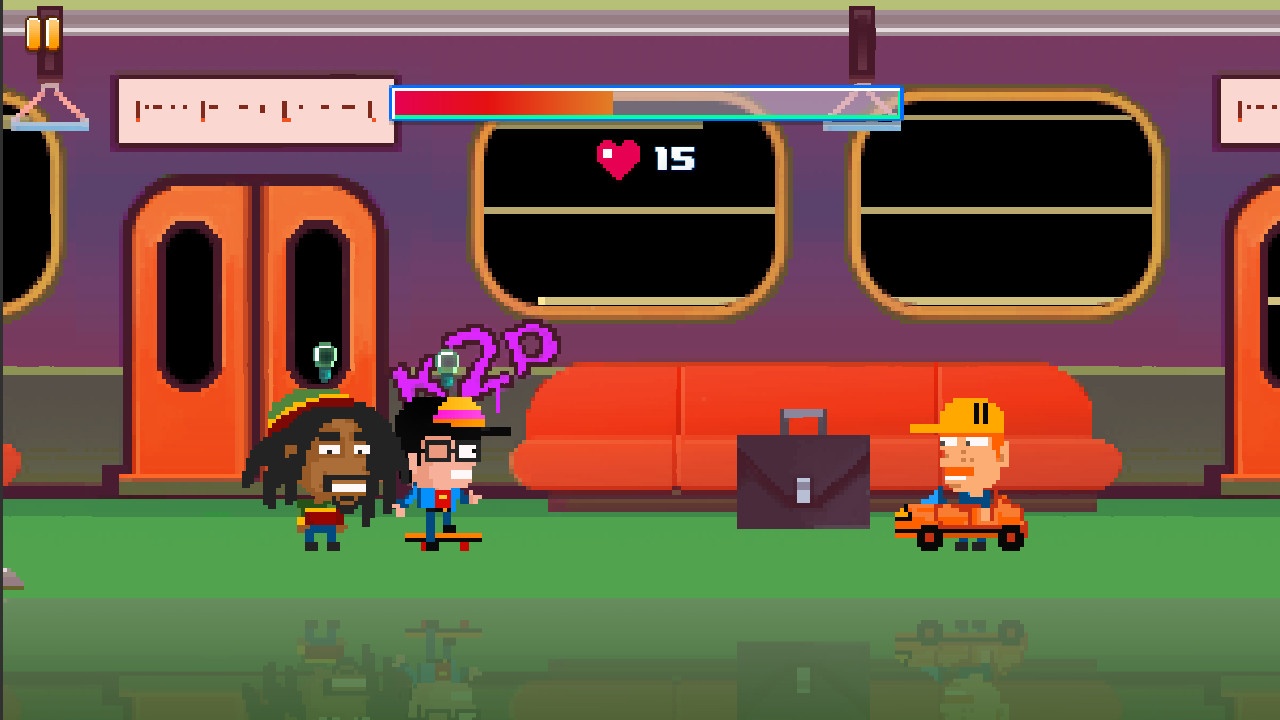 It’s a really good thing that the game has a bit extra added to it with the Switch release, because, at the core, the game has a straightforward mission statement, a series of very small minigames inbetween, and that’s it. You go through a stage of hugging people (or not hugging them) by moving either right (HUG!) or left (NO HUG!). Then you get a small game where you usually have to get clovers, either by jumping or running or some kind of thing. Then you just. Keep. Going. Eventually, you mess up and either hug someone twice or don’t hug someone, and you get points, a game over, and a chance to play a slot machine to unlock a new character. Of which there are an endless, crazy amount. Be a dude, be a dudette, be a skateboard dude, be an alien, be a deer, be an alpaca, be anything in order to hug. Eventually you can even make your own character for hugging purposes, and then you can hug. As that thing.

The multiplayer is a simultaneous thing where you and a friend go head-to-head in the hug fest. You have a limited amount of time to hug, and whichever one of you misses first is the loser. There’s no split screen or whatever, there are no weapons or powerups. You choose your character, they choose theirs, and then you get to hugging. The buttons are the same, so you can definitely do this with one JoyCon. Hell, doing it with a single JoyCon might lead to fewer mistakes because you won’t second-guess your hand placement. However, it is just more of the same from the single player “campaign,” so you won’t have anything spectacular here in terms of being able to unlock something magical. It’s already available, in stunning, pixely goodness. 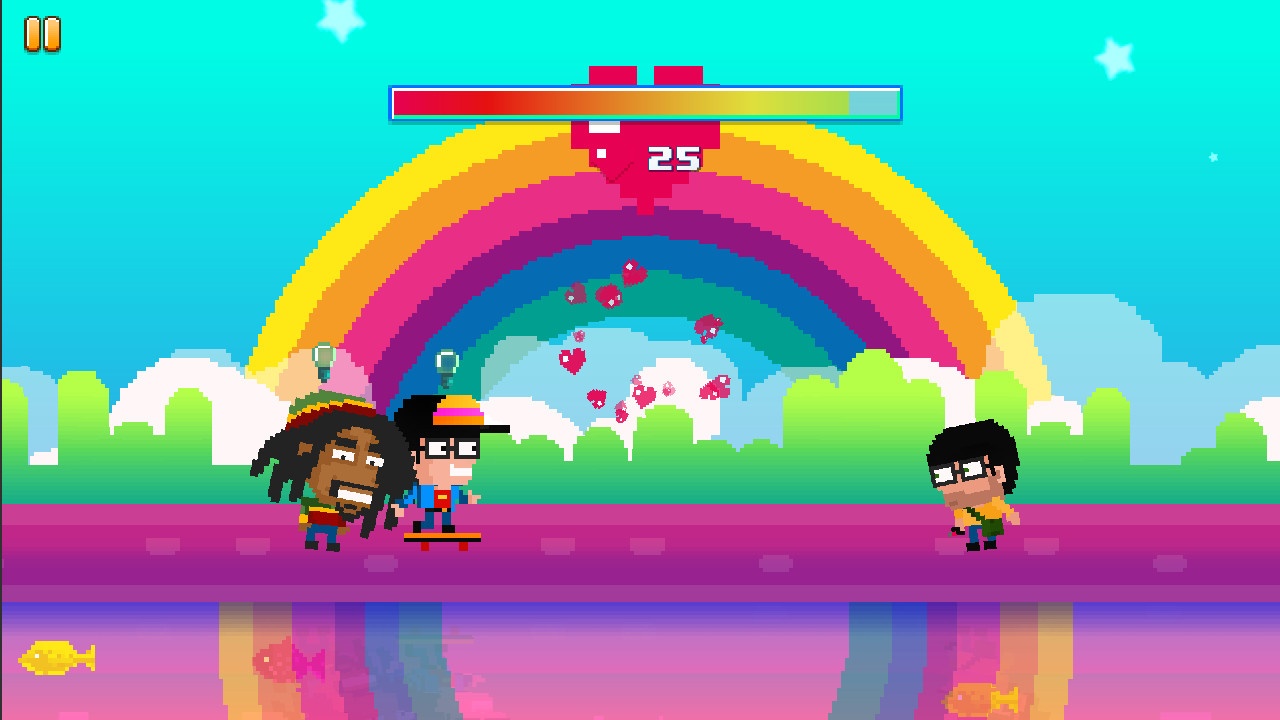 Any and all arcade games live and die by their replayability, and that usually boils down to uniqueness, excitement and general addictiveness. This, as you can ascertain from my writing, is just whether you enjoy memory games that are disguised as arcade runners. The sequences get longer, the people get a little more similar, but you understand the game, front and back, the second the tutorial is over. I, personally, got seriously bored within the first few minutes because it was the same mechanic over and over again. Left, right, right, left, etc. Even something like the “character customization” is being able to mix and match existing assets from characters that you’ve unlocked, so there isn’t even a big creation draw there. It can lead to absurd things, sure, and it’s enough to get giggles from my kids, but that’s pretty much about it.

Perhaps that’s the attitude a player should take when considering IHUGU. It’s a friendly, cute, nonviolent and easy to learn game. It helps to build a child’s memory skills, test their reflexes, and gives them a limited bit of creativity in terms of designing characters. I guess the game just isn’t for me, and I think it’s an absolute snore after a few plays, but I can see children enjoying it, and parents pushing it on children who want to play a game and you don’t want to give them anything with guns, punches or blood. Get it for some very, very casual and lighthearted play, but don’t expect anything in terms of a lasting, groundbreaking experience.

Repetitive and incredibly simple, IHUGU may be appealing to those sick of the dramatically violent games, but may be boring beyond words for some.