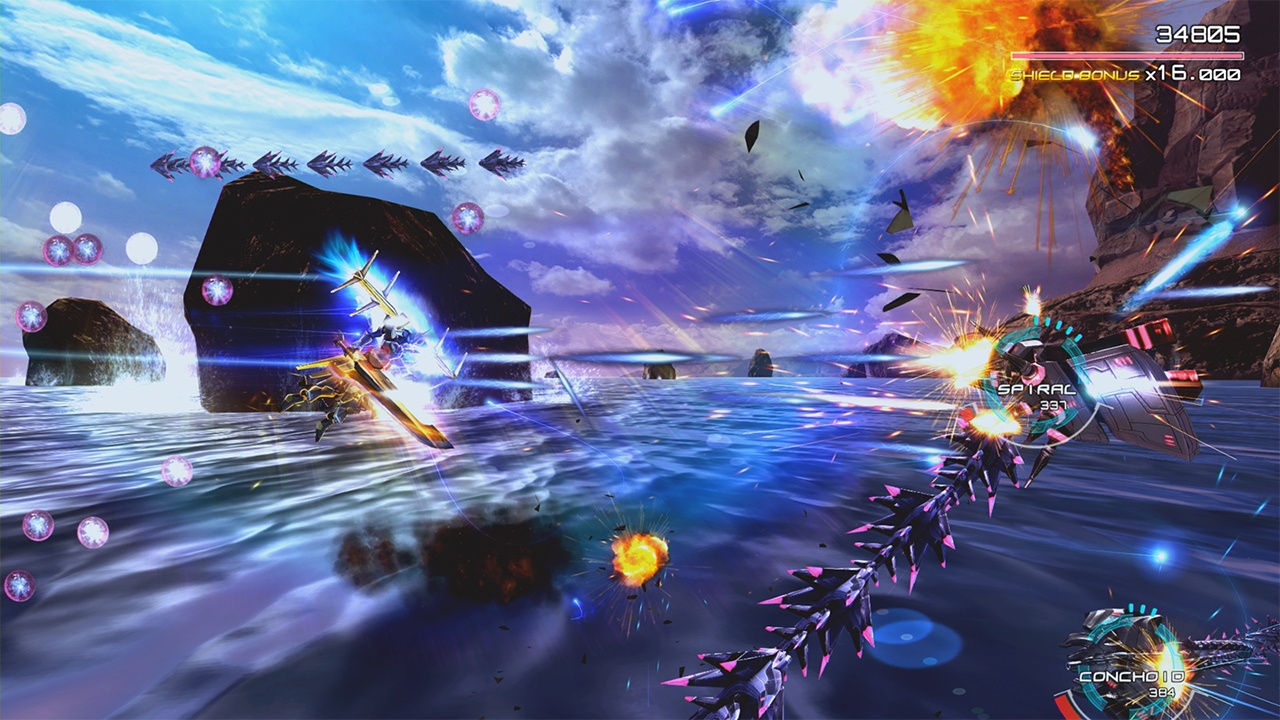 Shooters remain one of those fantastic types of games that I can always find something beautiful about. For a fairly simple concept, it’s seen so many fantastic implementations across the different generations and interpretations, and harken to the core of arcade gaming and impulsive replay. Even Smash Bros. Ultimate has the wonderful shooting segment at the end of Classic Mode that I look forward to more than dealing with Master Hand. So far, we’ve seen greats like Danmaku Unlimited, Ikaruga, and even some Touhou games make their way to the Switch, and even more are on the horizon. Now, one of the most cinematic shooters I’ve ever played has landed on the Switch, and players now have a mobile version of Edelweiss’ Astebreed to enjoy wherever they go.

As a shooter, Astebreed has, easily, one of the most complex plotlines that I’ve ever come across. You play a kid named Roy, who is the pilot in a futuristic battle suit called the Xbreed (pronounced Cross Breed). Roy is an orphan who was adopted by a dude that we see get blown up in the prologue to the game, and I guess he’s had a chip on his shoulder against the invading aliens ever since. The aliens are the Filune, who are a cross between the Borg, the Predators and something else, and basically are here to invade Earth, take it over, and use it to preserve their civilization. Roy is being helped by a girl named Fiona, nicknamed Fio, who is actually a part of Roy’s living consciousness inside the XBreed thanks to a technology called the Asymptote. Then we find out Fio has a long-lost twin sister named Estina, nicknamed Esto, who is waging war against humanity (called Terrans) AND the Filune, and after that things get complicated. Seriously, The story is massively engaging and long, and I would argue that Astebreed carefully straddles the line between shooter and kinetic visual novel. If you took out the shooting and replaced it with static images of space combat, it would still work, and people would still buy it. 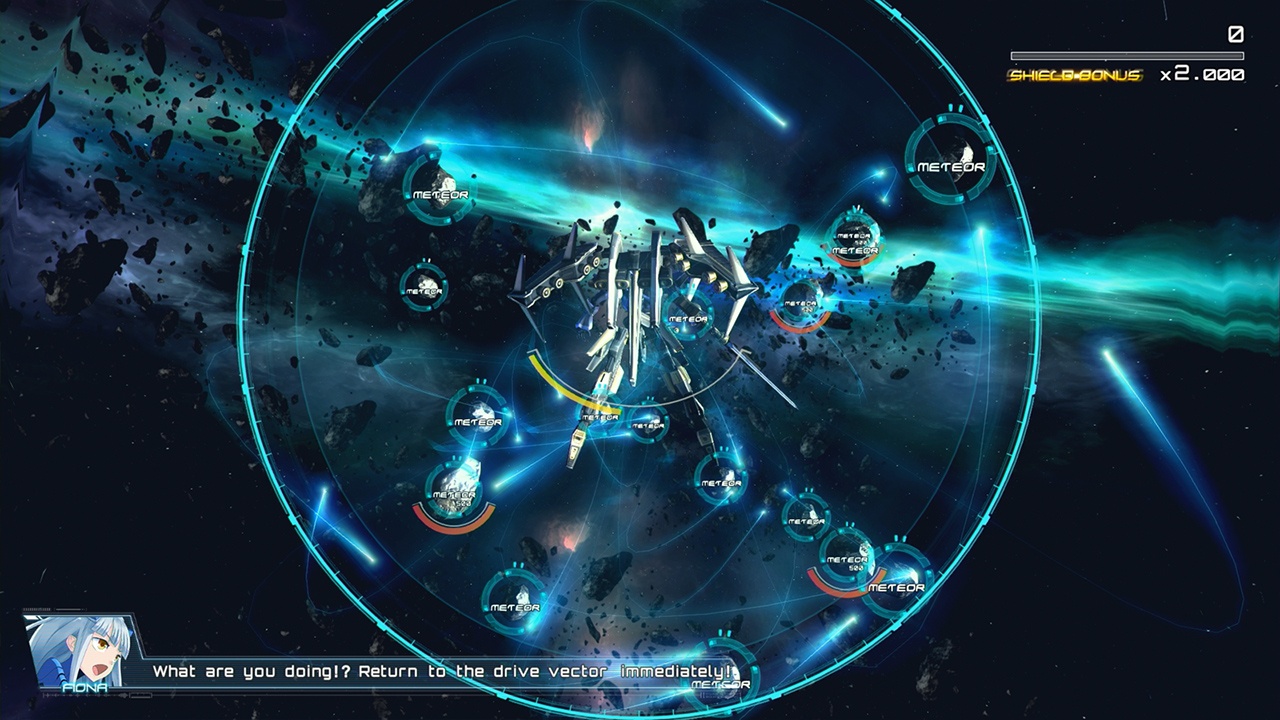 Astebreed, as an indie shooter, has wild success in two different areas: the combat and the graphics. Graphically, it’s insane to think that this came from a small studio, especially a studio that hasn’t done Steam published work in roughly five years. From the very beginning, when you see the design of the XBreed ships and the CGI sheen of the water as Roy comes sailing in to begin combat, you would be rightfully impressed with how clean, smooth and gorgeous the game looks. Even as the screen begins to fill up with enemies, you’re keenly aware of the depth perception that’s happening, forcing your perspective to alter and tilt in every direction as the game guides you along a pathway of ever-changing combat, from horizontal to vertical shooting, not to mention times of almost aimless floating where danger seems to come from everywhere. The light show of it all and the sharp, individual craft of every enemy ship, talking anime head and technicolor explosion is masterfully done. Additionally, when you have small moments of downtime between the fighting, the background scenes where dialogue is examined and the characters reflect on moments of the past are quite detailed. When you consider that famous titles like Higurashi used to have blurred, ill-defined backgrounds and are still considered works of art, you really appreciate what Edelweiss did to make their quiet moments stand out.

In addition, the shooting and combat of Astebreed is superb, though it does take some getting used to. This is one of those instances where you have to be everything and everywhere at once in order to get the best score and, on higher difficulties, survive. You’ve got a straightforward blaster, sure, as well as a powerful shot that charges up, but then you’ve also got this omnidirectional missile launcher that is your best friend, bar none. Being able to pick off smaller ships by targeting them from any direction is super important and a lifesaver when you get to later stages. Hell, it helps you out from the very first second you start playing as long as you know what you’re doing. Plus, you’ve got a dope sword a la Gundam Wing that you can use to do some serious damage if you’re insane and need to get in close for combat during boss fights and minor alterations. All of this together makes for a flowing, ever-changing dance of mayhem and destruction that builds up your score multiplier and makes you feel like a graceful angel of death as the rocking soundtrack drives you forward. If you’re not sure you can handle all of that, don’t worry: Arrange Mode is a type of shooting that’s vastly superior to the original configuration of the game and makes for targeting and shooting much easier. However, it should be noted that, despite what the option says, this was NOT created for the Nintendo Switch: Edelweiss put out Arrange Mode some years ago to celebrate the Remaster of their game. A minor note, but let’s not misrepresent the affectations of the game. 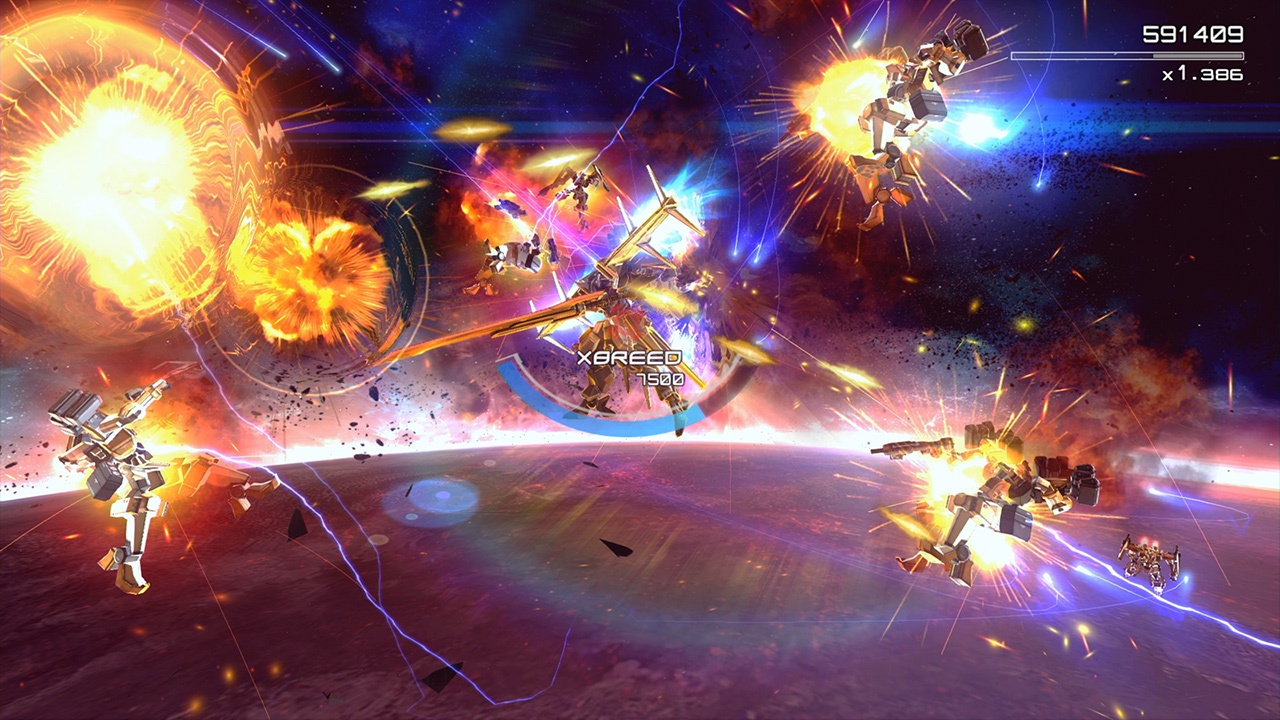 If that were it and that’s all that Astebreed was – a masterful shooter with an ever-changing perspective and a shocking number of stages – then it would be an instant 10/10. However, what sets Astebreed apart is also a bit of the downfall. The storyline of Astebreed isn’t too confusing in terms of visual novels or RPGS, but, for a game genre that asks you to keep focused and nuance your movement so that you don’t die instantly, there’s a hell of a lot of story happening. The talking heads that pop up and shout out information during the game are quite distracting at times, and, when Esto first appears and Fio is so shocked she nearly short circuits, you’re sort of busy dealing with a ton of incoming crafts. Unless you’re fluent in Japanese, you’ll be inclined to look down and read what is happening here, in the middle of goddamn combat, and boom, great, you’re dead. You absolutely have the ability to turn off the mid combat dialogue in the options (THANK YOU), but now you’re missing out on the story and can easily be a bit turned around by the time you get to an appropriate moment where the game can talk to you without distracting you. It’s sort of a no win situation unless you’re willing to play the game through multiple times (doable, and quite fun), or have someone at your shoulder to dramatically read the subtitles to you (also interesting).

But my whinging about plot in a shmup is about as relevant as complaining about the popcorn at a baseball game. Yea, it’s an element, but it’s far from the most important thing happening. When all is said and done, Astebreed is a visually stunning, aurally pleasing, and technically masterful game that is in even better shape than it was when it first appeared at Comiket so many years ago. This is the first time that fans will have a truly competent way to play it on the go, and newcomers will welcome the change for a worth-every-penny shooter to land in your lap. Just bring a notebook, or find the wiki: the details get very, very confusing.

Honestly, just one of the best looking and best performing shooters out there, even five years later.